Nazanin Zaghari Ratcliffe’s return to the UK marks the end of a heart-wrenching six-year battle for freedom. Locked up in Iran’s bleakest jail for crimes she never committed, she would experience unimaginable suffering – not least the prospect of never again seeing her accountant husband, Richard, or young daughter, Gabriella.

Thousands of miles away in Britain, Richard Ratcliffe would prove her devoted and steadfast advocate, mounting a tireless campaign of hunger strikes and protests as well as hundreds of media interviews where he would inspire millions with his extraordinary stoicism, courage and unfailing decency.

But for Gabriella – growing up in Iran with her grandparents – he would grow into a distant figure who she only ever saw on a screen. Once, the child would heartbreakingly ask her mother, ‘Do you know Daddy? Have you ever met Daddy?’ Gabriella would go on to join her father in the UK – leaving Nazanin even more isolated.

Richard would describe how his wife became a ‘chess piece’ in a wider political game, and her fate would become intertwined with the fickle world of global geopolitics. Over the years regular glimmers of hope would emerge only to be instantly snuffed out.

Imprisoned by Iran’s brutal secret courts, Nazanin would be chained, blindfolded, and bombarded with bright lights and blaring TVs to deprive her of sleep. The British-Iranian charity worker would then be subjected to gruelling interrogations lasting for nine hours.

She arrived in Oman this afternoon and expects to be reunited with her family in the UK tonight after Boris Johnson’s government finally reached a deal with Iran’s tyrannical regime. As Britain and the wider world celebrates her eventual freedom, here is the full story of her punishing ordeal.

Nazanin Zaghari-Ratcliffe with her daughter Gabriella. Her ordeal began in 2016 when she was detained by the Iranian Revolutionary Guard at Imam Khomeini airport after a holiday visit to Iran where she showed Gabriella to her parents 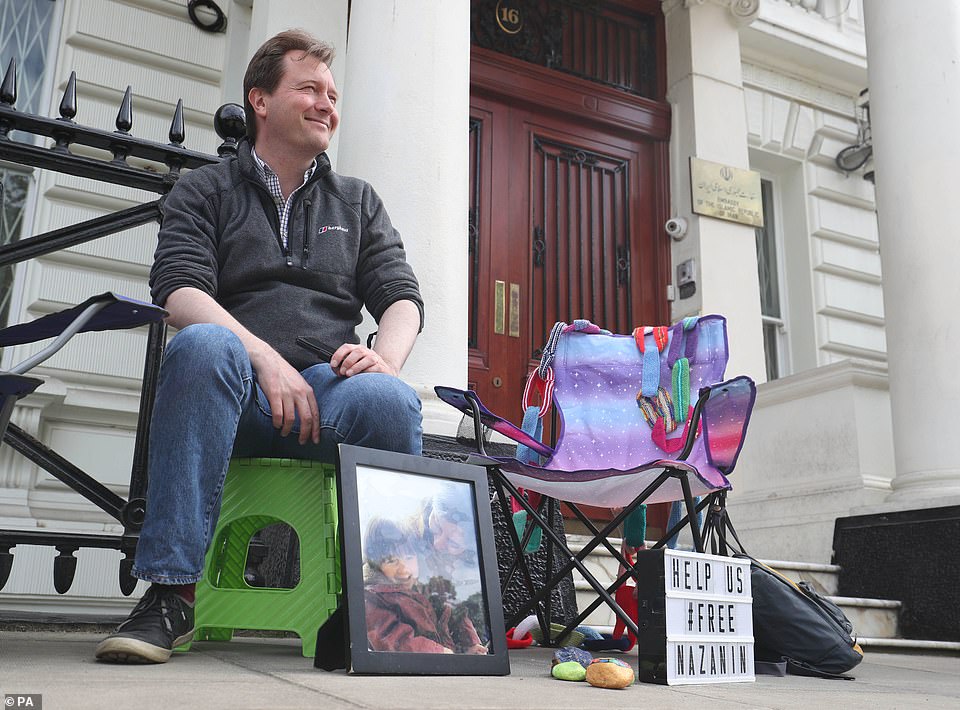 The nightmare began in 2016 when Nazanin was arrested by the Iranian Revolutionary Guard at Tehran Airport after visiting her parents in Iran with Gabriella, then aged one.

Video aired on state TV showed the mother looking shocked as she was asked to show her passport and step away from the check-in area before being led away in darkness.

After 45 days in solitary confinement without legal counsel or medical treatment, she was eventually sentenced to five years in prison for spying following a secret trial. She lost an appeal.

Back in Britain, Richard Ratcliffe was now separated both from his wife and his daughter, who stayed in Iran with her grandparents. He began his long campaign for her release.

It was to be long, exhausting and punctuated with repeated false starts and flashes of hope that quickly faded to nothing thanks to the continual scheming of Iran’s tyrannical leaders.

But Richard kept going through it all, inspired by his love for a woman he met through mutual friends in 2007 after she secured a scholarship at London Metropolitan University to study for a masters in communication.

Describing their first date, Richard said they ‘clicked’ and he felt like he had ‘come home’. They married just two years later in Winchester and Gabriella was born in June 2014.

Following his wife’s imprisonment in 2016, Richard became a regular feature on news channels and TV talk shows, where he inspired audiences with his remarkable tenacity in fighting his wife’s cause. 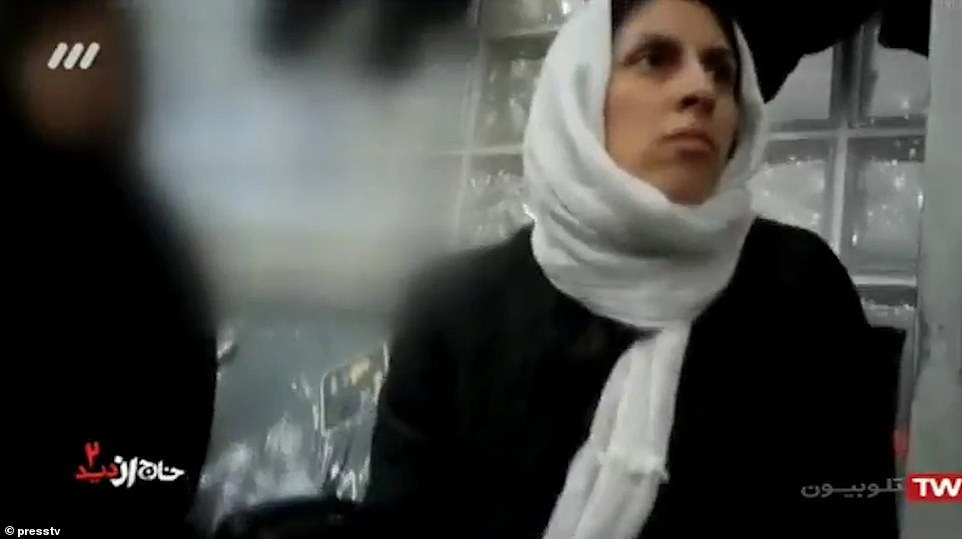 The nightmare began in 2016 when Nazanin was arrested by the Iranian Revolutionary Guard at Tehran Airport after visiting her parents in Iran with Gabriella, then aged one 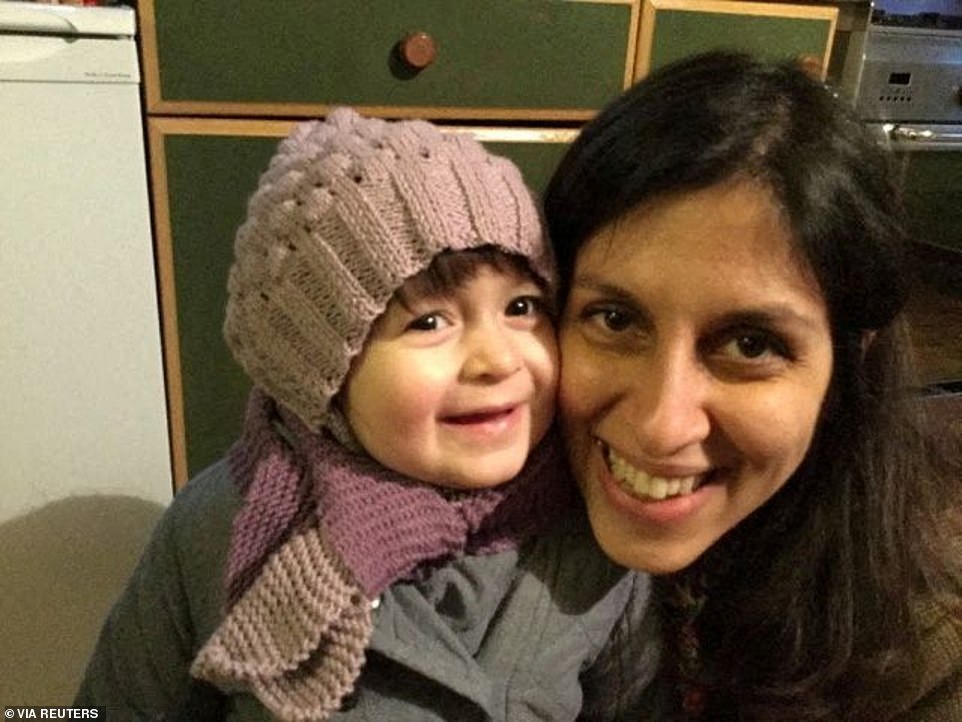 Boris Johnson, as Foreign Secretary, took a prominent role in fighting for Nazanin’s release, but caused untold damage to the campaign by notoriously telling MPs she had been involved in ‘training’ Iranian journalists.

This was treated by Tehran as an ‘unintended confession’ that flew in the face of her family’s claim she was in Iran purely on a family visit – and days later she was hit with fresh charges of spreading propaganda.

After repeated calls to resign, Mr Johnson eventually apologised 12 days later. Richard later criticised his initial failure to ‘take responsibility’ for his actions, but with his customary level-headedness added that the true blame lay with the Iranians.

The first of a series of false starts came in August 2018, when Nazanin was temporarily released from prison to spend time with Gabriella, only to be sent back after she suffered a panic attack.

When it emerged she had developed lumps on her breast – indicating possible breast cancer – she was repeatedly refused medical visits.

As Nazanin announced a hunger strike, Richard revealed her deteriorating mental state in a series of interviews, including her ‘despair’ at turning 40 alone in her prison cell with the prospect of never being able to have a second child.

He also told of the pain of his separation from Gabriella, who he was only able to speak to on FaceTime. He told Huff Post: ‘Gabriella asked her mum about six months ago ”Do you know Daddy? Have you ever met Daddy?”

‘Of course for her I’m just a face on the phone. Nazanin was mortified, horrified.’

He also revealed that he still buys her presents every year, including a handbag and a furry hat, and has them wrapped up waiting for her to return home. 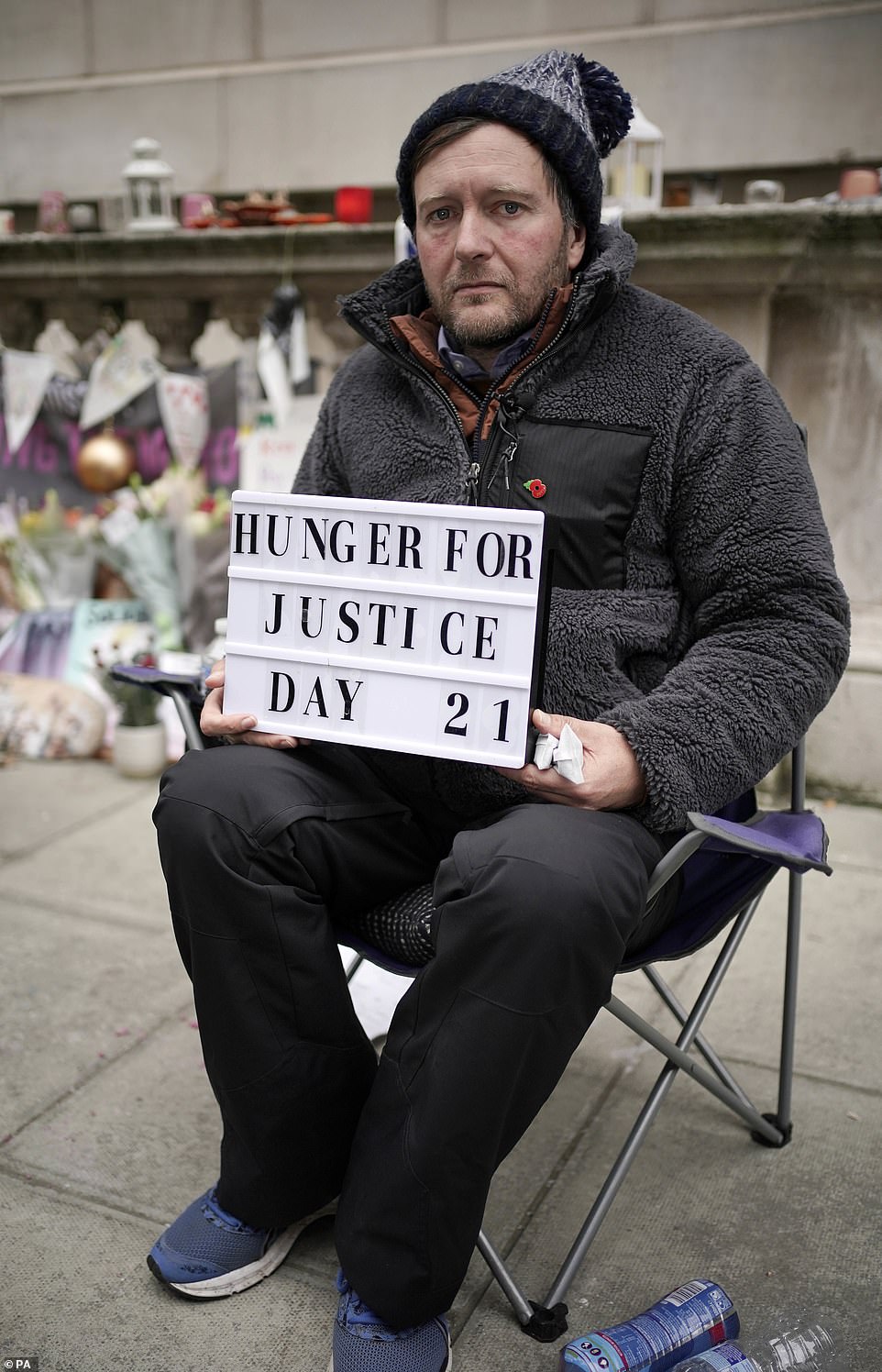 Richard spent 21 days camped outside the Foreign, Commonwealth and Development Office without food earlier this year 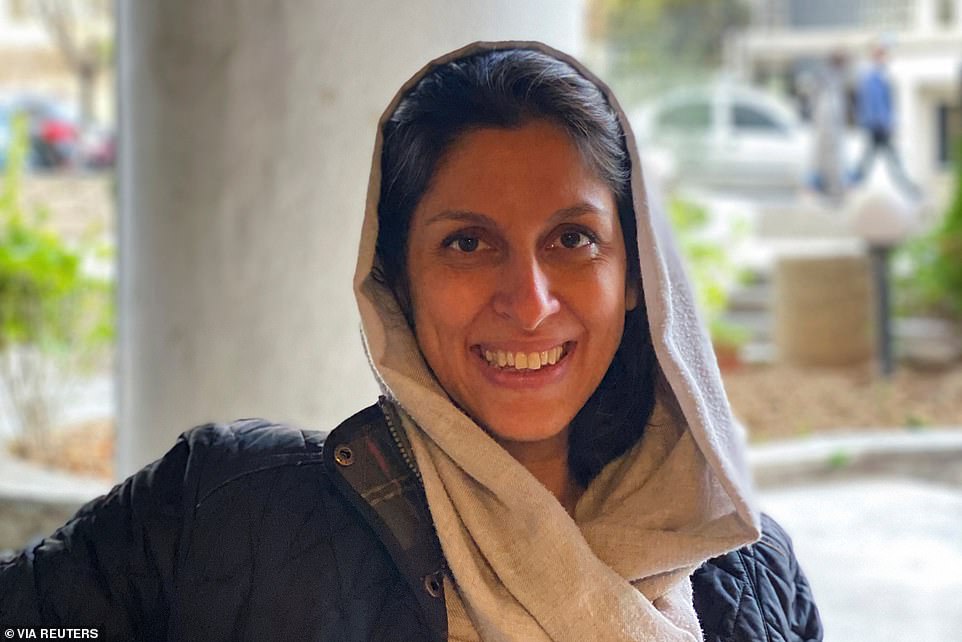 Nazanin, a British-Iranian dual national, is pictured beaming after her five-year jail term came to an end in 2020. She would go on to be jailed again 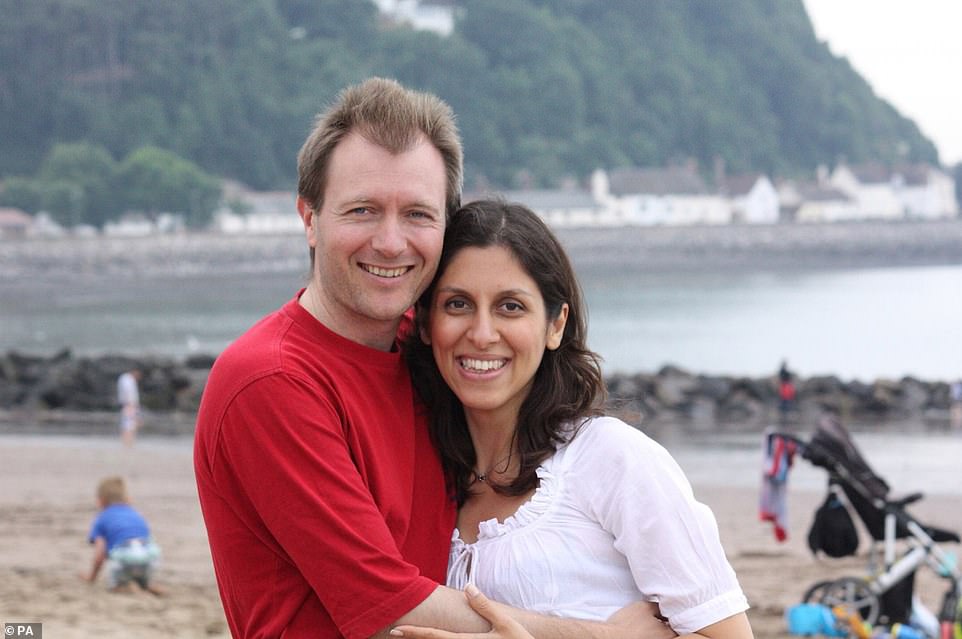 The following year – 2019 – brought a redoubling of diplomatic efforts to save Nazanin, who was given diplomatic protection to allow her case to be raised at the United Nations.

A glimmer of hope emerged in April after Iran’s foreign minister, Javad Zarif, mooted the idea of a prisoner swap, only to backtrack just hours later.

It had long been feared Nazanin was being held by Tehran as a ‘bargaining chip’ over a historical £400million debt owed by Britain following a thwarted arms deal.

Then Foreign Secretary Jeremy Hunt likened the debt to ‘ransom money’, with officials said to be concerned about the money ending up in the pockets of Iran’s Revolutionary Guard – declared a terrorist organisation by the US.

Continued claims of mistreatment at Tehran’s notorious Evin prison led Nazanin to mount another hunger strike – with her husband, Richard, joining her in solidarity by setting up camp outside the Iranian embassy and refusing to eat for the duration of the protest. 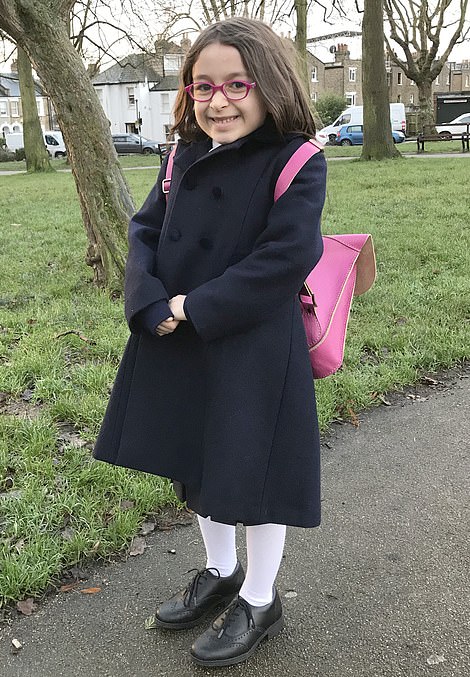 2020: Posing with a pink satchel made by her mummy, Gabriella ready for her first day at school

In July, she was transferred to a hospital mental ward and spent a week ‘chained to a bed’ in solitary confinement – an experience so grim a ‘broken’ Nazanin declared herself relieved when she was eventually returned to prison.

She was later to lose the comfort of weekly visits from her daughter, Gabriella, when she was returned to Britain in order to be reunited with her father and start school.

On her first day in January 7, 2020, Gabriella would wear a pink satchel made by her mother – the usually happy milestone tinged with sadness with her mother still thousands of miles away in an Iranian jail.

Mr Ratcliffe was the one to brush her hair – something his wife had always said she wanted to do when Gabriella first went to school. ‘The moment wasn’t bittersweet exactly,’ he said. ‘It’s a different kind of emotional challenge for Nazanin.’

‘She has missed her first day of school. It’s a big one she’s not there for… She should’ve been the one brushing her hair, walking her to the school gates and meeting the other parents.’

Worsening relations between Iran and the West prompted further worries, with Richard describing the assassination of Revolutionary Guard leader Qassem Soleimani as a ‘hammer blow’ to their hopes of getting Nazanin released.

In March 2020, she was freed from jail due to the coronavirus pandemic and kept under house arrest.

Hopes of her being granted clemency were later dashed and in April last year she was given an additional one-year jail term and banned from leaving Iran for a year.

Her lawyer Hojjat Kermani said Nazanin received the second jail sentence on a charge of spreading ‘propaganda against the system’ for participating in a protest in front of the Iranian embassy in London in 2009.

She lost an appeal against that sentence in October. 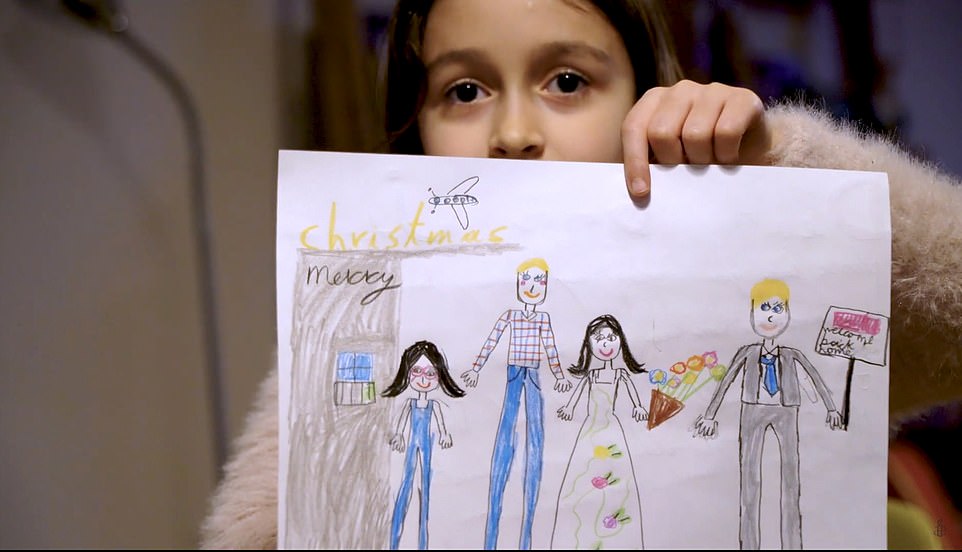 Later that month, Boris Johnson suggested he was open to striking a deal with Iran to secure her release, telling the Commons Liaison Committee it was ‘worth considering’ sending a plane with a ‘crate of cash’ to Iran to settle the £400m debt Britain owes the country.

Frenzied diplomatic negotiations went on behind the scenes over the following months, leading to today’s astonishing breakthrough.

Nazanin arrived in Oman this afternoon after leaving Tehran following nearly ‘six years of hell’ in detention in Iran as she prepared to be reunited with her family in Britain tonight.

Her husband said he was ‘deeply grateful’ for her release and that he and their daughter Gabriella were ‘looking forward to a new life’. He said she had asked for him to make her a cup of tea on her arrival home.

Richard added: ‘There will probably be a couple of days’ peace and quiet somewhere else, and then back here. The first thing she wanted was for me to make her a cup of tea, so we will do (that).

Asked what he wanted to say to people who had campaigned for his wife’s release, Mr Ratcliffe said: ‘Just ”thank you”.

‘We wouldn’t have got here, this wouldn’t have happened today, without all the care and support of people up and down the country.

‘That’s ordinary people, people in the media, people in politics, some celebrities. But just the overwhelming care we’ve had.

‘And I remember saying this on the hunger strike – this has been a cruel experience in some ways, but it has also been an exposure to such a level of kindness and care from all walks of life.’ 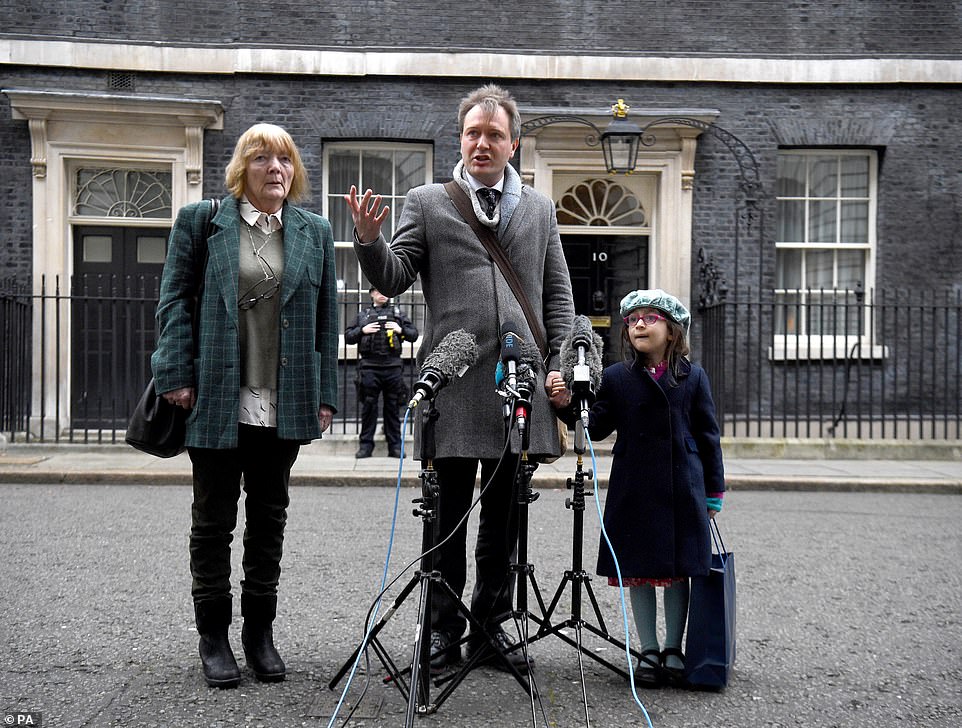 Richard (pictured Gabriella and his mother, Barbara) speaking to the media after meeting with Boris Johnson at Downing Street in 2020 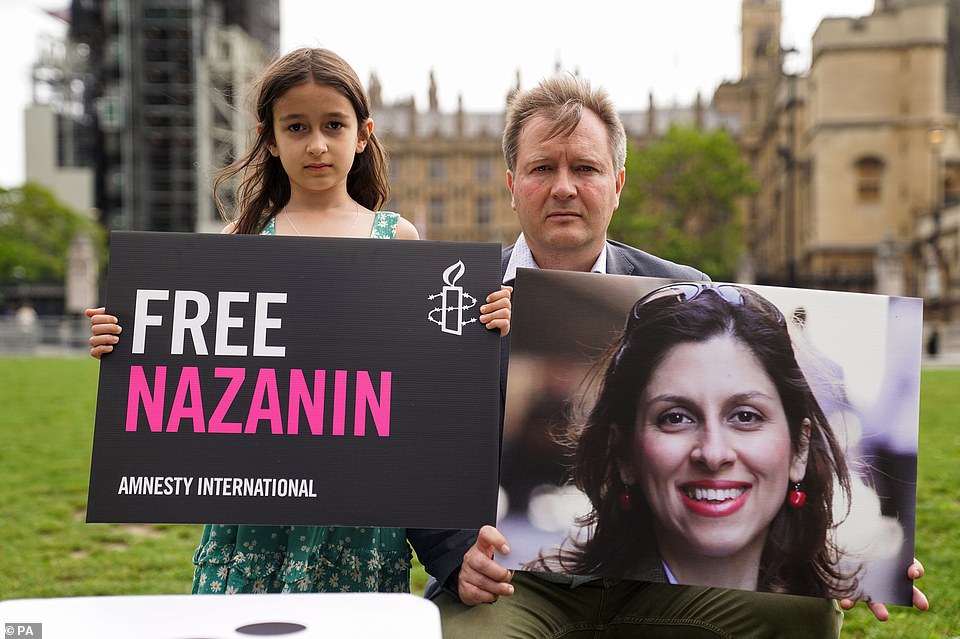