Nazanin Zaghari-Ratcliffe’s temporary release from an Iranian jail has been extended for one month, her MP has revealed today.

The British-Iranian mother, 42, has been freed from Evin prison in Tehran during the coronavirus pandemic.

She had been due to return to prison over the weekend, but her family were then told to return to the Prosecutor’s Office today, where her furlough was extended.

MP Tulip Siddiq tweeted this morning: ‘Very happy to hear from Richard Ratcliffe that Nazanin’s furlough has been extended for a month – in line with other prisoners in Iran.’

Nazanin Zaghari-Ratcliffe, the British-Iranian woman jailed in Iran, has had her leave from prison extended by a month, according to her husband 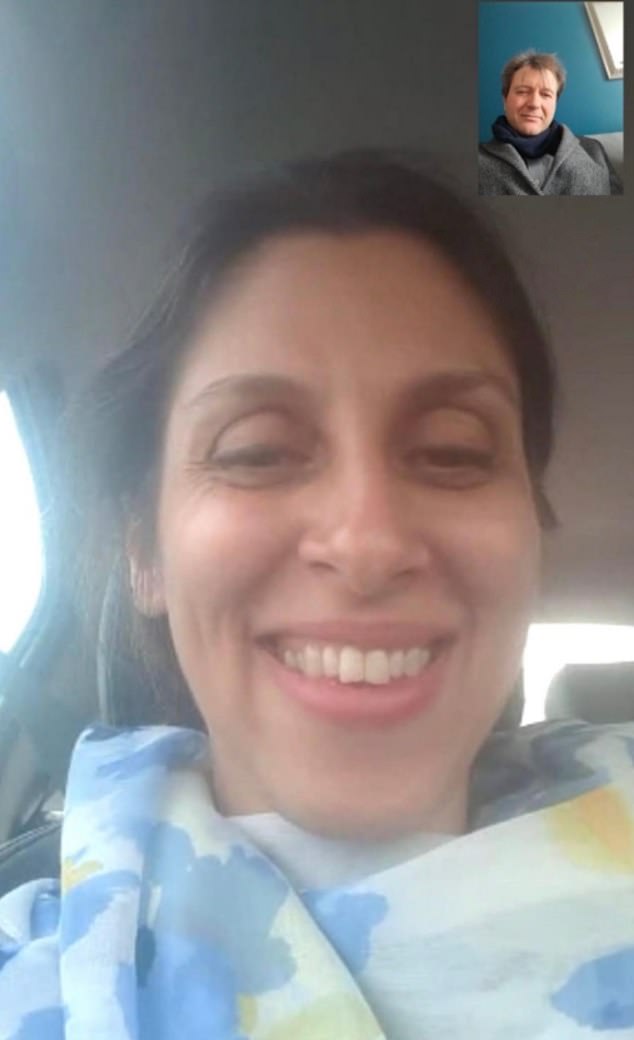 Nazanin Zaghari-Ratcliffe and inset her husband, Richard Ratcliffe, who revealed her jail furlough has been extended by a month

The Labour MP added: ‘Now is the time for our government to do all it can to make it permanent.’

Ms Zaghari-Ratcliffe was arrested at Tehran’s Imam Khomeini Airport while travelling to show her young daughter, Gabriella, to her parents in April 2016.

The mother-of-one was sentenced to five years in prison, accused of plotting to overthrow the Iranian government, which she denies.

Mrs Zaghari-Ratcliffe has been living in relative isolation at her parents’ house in Tehran while the country struggled to deal with the outbreak.

She has had to wear an ankle tag during the furlough, and can only go within a 300-metre range of her parents’ home.

Her temporary release in mid-March followed the release of 85,000 prisoners in Iran to stop the spread of coronavirus.

She said at the time: ‘I am so happy to be out. Even with the ankle tag, I am so happy. Being out is so much better than being in – if you knew what hell this place is. It is mental. Let us hope it will be the beginning of coming home.’

They added: ‘There should be no question of Nazanin ever being sent back to Evin Prison. There are numerous reports of Covid-19 in Iranian jails, with detainees pleading for basic things like soap to help combat the disease.

‘We’re urging the Iranian authorities to finally do the right thing and free Nazanin permanently, allowing her to return to her family back here in Britain.’