NBA and WNBA stars live the high life in quarantine

With NBA and WNBA players preparing to restart their seasons in Orlando and Bradenton, Florida, respectively, two social media accounts have been giving fans an inside-the-bubble look at basketball’s comprehensive coronavirus strategy, as well as some fishing, binge drinking, and a little gambling.

Combined, @NBAbubblelife and @WNBAbubblelife already have over 100,000 followers on Twitter and Instagram since pro basketball players have been quarantined at Disney World (NBA) and IMG Academy (WNBA). The clips and photos are pulled together by a group of self-described ‘hoop heads’ living on the West Coast, accord ing to the New York Times. 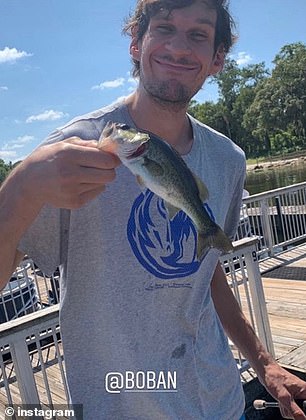 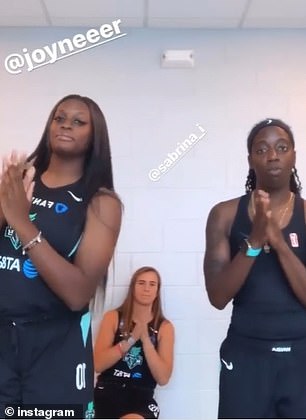 (Left) Dallas Mavericks center Boban Marjanovic hauled what appeared to be a small fish, but he’s 7-foot-4 so it could have been a halibut for all we know. (Right) New York Liberty teammates Joyner Holmes (left), Sabrina Ionescu (center) and Jazmine Jones (right) dance 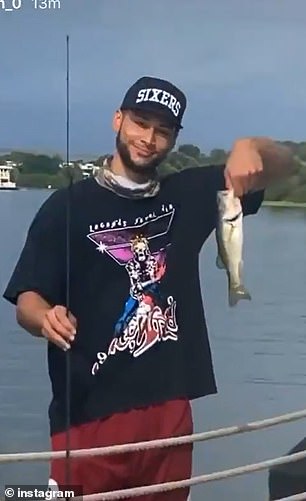 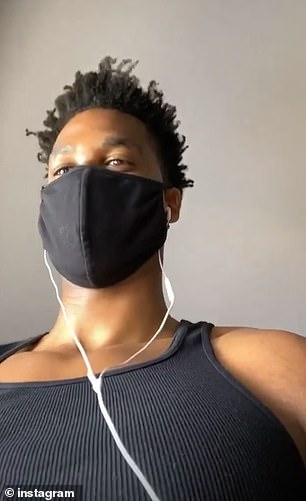 ‘This project has helped me mentally to have an escape,’ Phillips told the Times. ‘I get some fun versus six hours a day of seeing negativity. The timing has been perfect.’

The NBA’s 2019-20 season will resume with just 22 teams on July 30, while the WNBA campaign begins on Friday. Both groups of players are closely monitored and quarantined away from the general population in Florida, which has confirmed over 370,000 coronavirus cases in one of the country’s infection epicenters.

Although their social media handles are similar, NBA players’ ‘bubble life’ content has contrasted with their WNBA counterparts, likely due to the differing accommodations.

Whereas the NBA players are living the resort life in Orlando, the top female players are staying at an athletic academy that is unaccustomed to the demands of a WNBA season.

‘You step outside and the humidity does something to you – to your soul,’ she said in a self-shot video. ‘I’ve taken three showers today.

‘Then you’re walking passed the trash can, me and the raccoon had a standoff,’ she continued. ‘He stared at me, I stared at him. I was like ‘Cool, this is your territory…’

‘Then there’s alligators in the creeks. I don’t know if you run zig zags.’

Someone off screen confirmed: ‘You run zig zags.’

‘But who’s gonna think to do that?’ Parker shot back.

That’s not to say the WNBA bubble is humorless.

The NBA bubble outside Orlando hasn’t disappointed, thanks, in part, to a seemingly endless supply of alcohol.

New Orleans’ JJ Redick, Miami’s Meyers Leonard, as well as Utah’s Jordan Clarkson and Royce O’Neale all recorded themselves chugging beers, while other players have posted pictures of wine bottles that were gifted to them.

Redick actually won a bet by with teammates by getting over 10,000 retweets for the shot of him chugging a beer while recuperating in an ice bath.

‘A bet’s a bet,’ Edwards said. ‘When that rolled out, we were kind of like, ‘We’ve got something, fellas.’

Fishing has also been a popular activity inside the NBA bubble, where 76ers point guard Ben Simmons was recorded tossing a fish back into the lake and Mavericks center Boban Marjanovic hauled what appeared to be a small specimen (although he’s 7-foot-4 so it could have been a halibut or something larger). 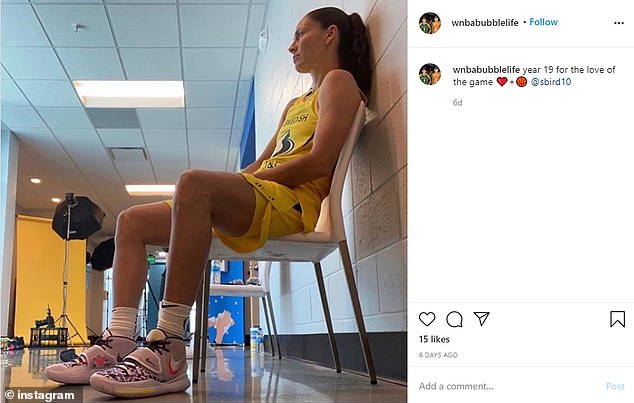 Above all, the two social media accounts serve to underscore just how unique the 2020 WNBA season and the resumption of the NBA’s 2019-20 campaign will be.

The league’s marketing motto for the restart of the season at Walt Disney World is ‘Whole New Game,’ and in many respects, that’s very true. The arenas that will be used for the exhibitions, the seeding games that start July 30 and then the playoffs that are scheduled for mid-August through mid-October set up much differently than usual — all with safety during a pandemic very much in mind.

Los Angeles Clippers coach Doc Rivers said league officials have been great, ‘they really have been. They’ve done everything right as far as I’m concerned.

‘I mean, when you think that we’re running a village for the first time, the league is doing pretty well in city management.’

The court dimensions, of course, are unchanged.

Everything else about an NBA game setup is new.

Seating in the bench areas will be assigned, with folding chairs set up on three rows instead of the customary two and spaced out several feet from one another — instead of players sitting shoulder-to-shoulder as they have in the past. And across the center stripe, the words ‘Black Lives Matter’ are painted onto the surface.

The area where the official scorers, timers and statisticians sit is enclosed by plexiglass, with social distancing in that makeshift room as well. Broadcasters, who are courtside in normal circumstances, will be higher up and several feet further back from the playing surface. Even the setup for replay reviews will be different — that monitor is in the corner of the arena, instead of being kept at the scorer’s table and utilized when needed.

League officials hope they thought of every way to keep people apart and promote social distancing.

‘I didn’t see it in person,’ Jokic said. ‘Tim told me it looks really nice. But to be honest, I’ve played in every possible arena. Nice, bad. Cold, hot. Whatever.’ 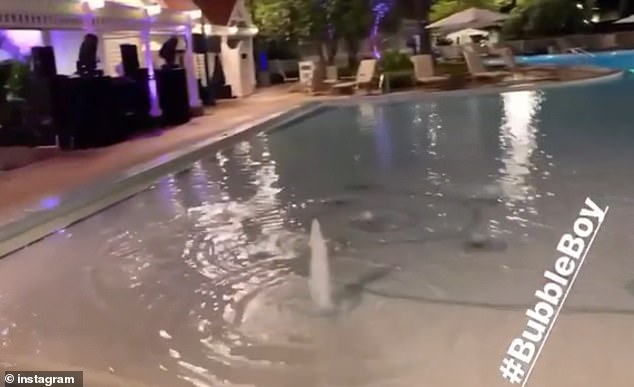 While NBA players can relax by the pool at Disney World (pictured) WNBA players have been less enthusiastic about their surroundings at IMG Academy in Bradenton, Florida

The exhibitions that start on Wednesday will be glorified scrimmages, designed to help the teams, the referees and even the game-night workers figure out how everything works. Teams have even collaborated on their game plans, asking one another what they want to work on in these matchups that won’t count for anything.

They won’t even have a game feel: No national anthems will be played, no starter introductions will take place, warmups might not even happen like usual and some real-game elements might get tested out to see what works. The first scrimmages for each team will also have 10-minute quarters, as opposed to the usual 12.

‘I’ve just got to take it one game at a time, see what it’s like during these scrimmages,’ Clippers forward Kawhi Leonard said.

Miami coach Erik Spoelstra said he reached out to Utah’s Quin Snyder and Sacramento’s Luke Walton on how they wanted to make things work in their upcoming scrimmages, and other coaches have had similar conversations.

The Clippers play Orlando on Wednesday. Rivers said he knows exactly what Magic coach Steve Clifford will do in that scrimmage, and Orlando knows the Clippers’ plans as well.

‘We’re looking at this as an opportunity to get better for both teams,’ Rivers said. ‘So, coaches are absolutely sharing things. We’re asking them in this quarter can you do this, on-side, out-of-bounds, can you do this defense, then what do you want me to do? I think it’s been great in that way.’