By Josh Saunders For Dailymail.com and Reuters

James made the trip to Las Vegas to watch his 14-year-old son LeBron ‘Bronny’ James Jr. compete in the Big Time Hoops Tournament.

Playing his final tournament for the North Coast Blue Chips, Bronny left his mark by scoring an impressive slam dunk.

Skillfully weaving through the center of three opponents, the star-in-the making made an impressive leap to place the ball into the net with one-hand.

The crowd erupted with cheers and many jumped to their feet to celebrate the final minute play by Bronny that would seal his team’s victory.

Proud dad James roared with pride and beamed as he celebrated his son’s impressive play.

Overjoyed and beaming James Snr. (above) celebrates by putting his hands in front of his stomach flexing his muscles and roaring with pride 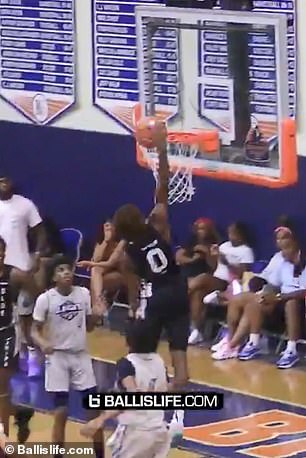 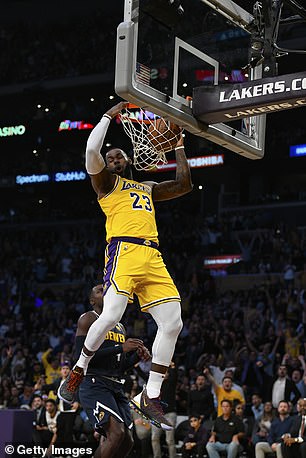 After making an impressive leap, Bronny (left) slams the ball into the net with just one hand in a move that could almost mirror slam dunks by proud dad Lebron James Snr. (right at an October game against the Denver Nuggets)

Delighted by the team’s victory, James later tagged every team member in the North Coast Blue Chips on Instagram.

In the picture, the full team posed with their finger above their nose celebrating their third National Championship, according USA Today.

‘3 in a row National Champs!! So proud of these guys! Love you boys #NCBCBrotherhood4L,’ James wrote.

Bronny who seems likely to follow in his father’s footsteps plays-up an age level with team Strive For Greatness and plans to play high school basketball next year despite being in the ninth grader at Sierra Canyon, according to the site. 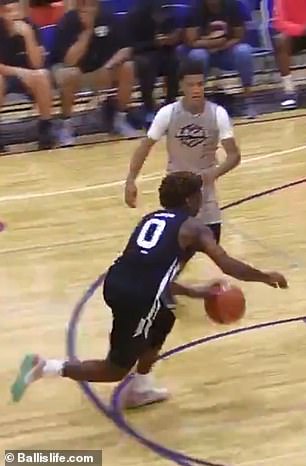 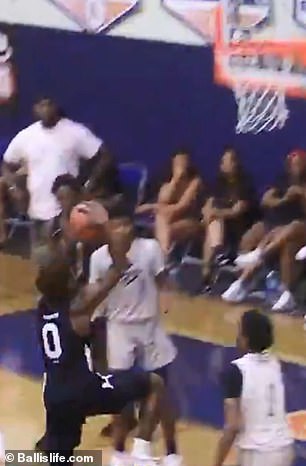 LeBron ‘Bronny’ James Jr., (pictured in Jersey number 0), skillfully weaves past three opponents with speed, in a move similar to his father who is watching in the background

James Snr. revealed that he regrets naming his son LeBron James Jr. in a preview for new HBO show ‘The Shop’ released on Thursday.

Comedian Jon Stewart asked James about the pressure put on his 14-year-old son by his massive shadow, in the clip.

‘I still regret giving my 14-year-old my name, because of that,’ James replied.

He added that he made the decision because he lacked a father figure in his own life growing up.

‘When I was younger, I didn’t have a dad,’ James said. ‘So my whole thing was when I have a kid, not only is he gonna be a junior, I’m gonna do everything that this man didn’t do. They’re gonna experience things that I didn’t experience. 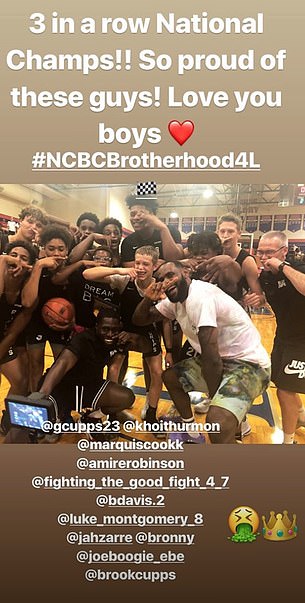 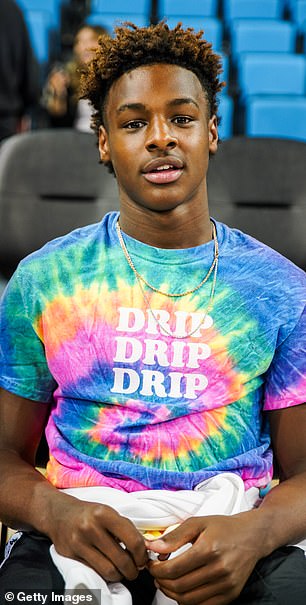 Proud dad LeBron James Snr. posted a picture of the winning team ad listed all of their names (left). His son Bronny (right) scored an impressive one-handed slam-dunk in the final minute 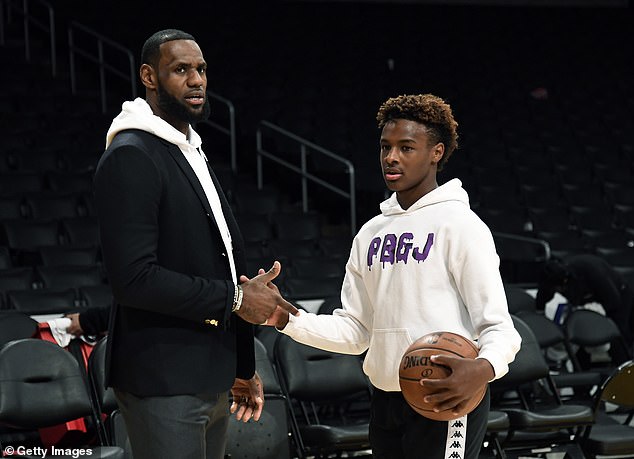 James Snr. (eft) with 14-year-old son Bronny (right), the youngster seems set to follow in his father’s footsteps and already plays above his age group

‘The only thing I can do is give them the blueprint, and it’s up to them to take their own course whenever that time comes.’

James also talked about the emotions he feels while watching his sons – Bronny is a 5-foot-10 AAU star – play in basketball tournaments, something he’s done much more frequently in recent years.

He told reporters earlier this year that his family would play a large role in his decision about where to play moving forward, before he signed with the Los Angeles Lakers in free agency.