NBA: Where did it go wrong for the Brooklyn Nets’ ‘Big Three’?

Kevin Durant. Kyrie Irving. James Harden. Three superstars who were meant to signal a new era in the NBA.

Brought together by the Brooklyn Nets, this is now arguably the biggest ‘what if’ in NBA history after this championship-caliber team was disbanded after just 13 months.

Harden was deemed the last piece of the puzzle but became the first to go, leaving in February for the Philadelphia 76ers in a trade.

Durant and Irving are both at Brooklyn, but neither by choice. Durant shook the basketball world by demanding a trade earlier this summer, while Irving would also like to seek pastures new. Neither have got their wishes though, resulting in two disgruntled stars.

So, where has it all gone for the Brooklyn Nets? Sportsmail analyses the issues.

James Harden, Kyrie Irving and Kevin Durant (L-R) were meant to usher in an era of dominance at the Brooklyn Nets but that ‘Big Three’ lasted just 13 months before the former left the team

A BIG THREE ONLY IN NAME

There’s a cliche in sport that ‘availability is the best ability’ and that certainly rings true with the Brooklyn Nets.

Putting it simply, their ‘Big Three’ were rarely all on the court together at the same time.

They played just 16 matches together in 13 months with injuries and the impact of coronavirus (which we’ll get to shortly) playing a large role for that miniscule number. 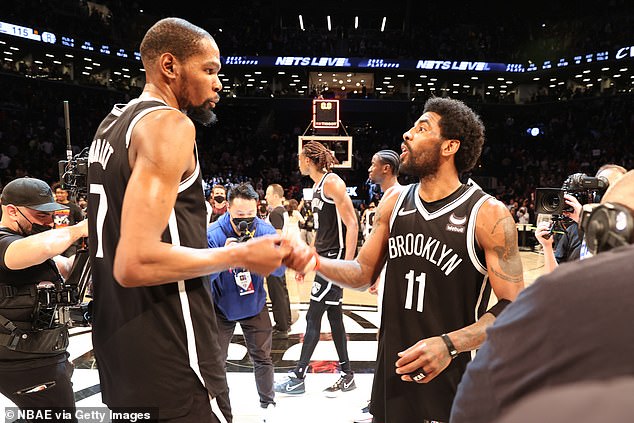 It was rare to see Durant, Irving and Harden on the court together during their 13 months

Across the season-and-a-half that they were together, the Nets were 13-3 with the trio on the floor. It was rare, but they were excellent together across the 10 regular-season games and six play-off encounters – which totaled just 365 minutes.

They had a positive effect on their team-mates too. As a franchise had an effective field-goal rate of 65.1 per cent and a true-shooting percentage of 70.7 per cent in the post-season.

Alas, it was only a small sample size of what could’ve been for reasons we’ll get on to to now… 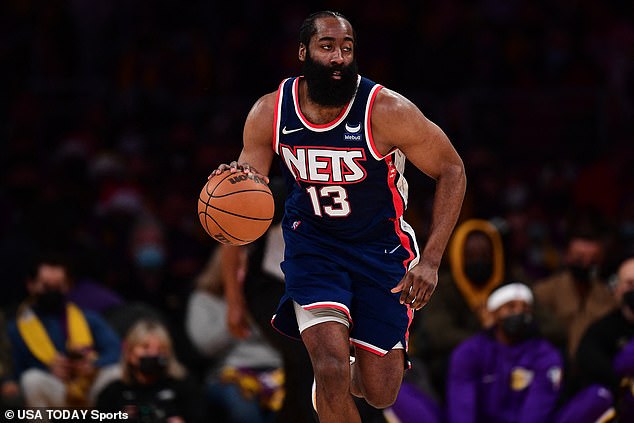 The trio were an offensive juggernaut, logging 119 points per 100 possessions (a NBA record)

Coronavirus has impacted everyone in their walk of lives with basketball no exception.

NBA superstar Irving missed the majority of the Brooklyn Nets 2021-22 campaign after deciding to remain unvaccinated – and being outspoken about so – but became free to play at the end of March after the state of New York relaxed their coronavirus policy.

Last August, the state of New York announced a mandate that meant civilians must have at least one jab of a vaccine to be able to enter indoor gyms, bars, restaurants, and entertainment venues. 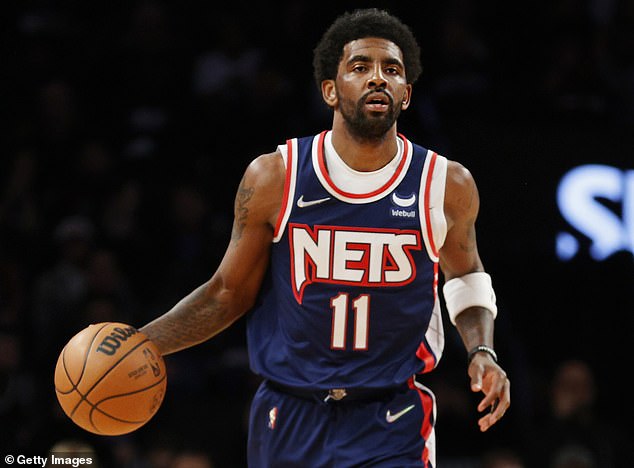 Irving missed the majority of the last NBA season due to the state of New York not allowing unvaccinated people into entertainment venues and other places. That has now changed

As a consequence of this stance, it meant Irving was unable to train at Brooklyn’s HSS Training Center or play matches at their Barclays Center.

A knock-on effect meant the Nets decided to sit the 30-year-old out of all of their activities, including away matches, to not disrupt their focus on the season.

However, they were forced to do a U-turn at the beginning of the year and bring back the point guard for their away matches due to mounting Covid cases and injuries within the squad.

The Eastern Conference outfit were bolstered even further following the decision by the Mayor of New York State, Eric Adams, to remove the mandate in March – meaning Irving was eligible to practice and play in Brooklyn.

However, it was too little too late for Brooklyn’s season. The consistency of a settled side was never there and the circus around Irving’s vaccination status loomed over the Nets – even when was fully cleared to play.

It left his team-mates disgruntled two-fold. One, they were without a world-class talent for the majority of matches which became a hindrance and two, they then had to constantly field questions about their team-mates.

These matters became grating on-and-off the court and played a reason as to why Harden eventually said enough was enough (more on that to come shortly). 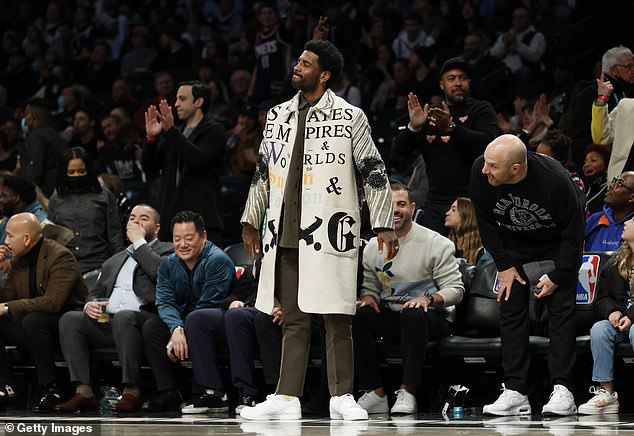 Kevin Durant is arguably (and he will have many backers on this) the best basketball player on the planet currently.

And on June 20, 2021 he demonstrated his talents in an agonizing losing effort to the eventual champions Milwaukee Bucks. However, if it wasn’t for his gargantuan size 18 feet, he and the Nets could’ve ended that campaign with the Larry O’Brien Championship Trophy.

After a topsy-turvy Eastern Conference semi-final series, the Nets hosted the Bucks in Game 7 of their best-of-seven series. 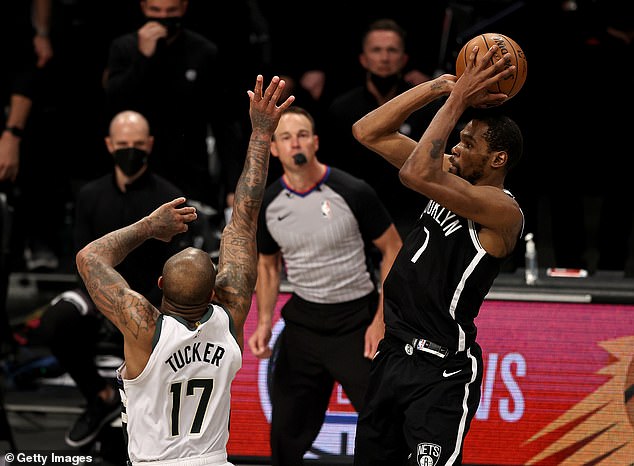 Trailing 109-107, the Nets regained possession with six seconds left after the Bucks turned it over on a shot-clock violation.

In a fairy-tale finish, Durant hit a spinning, turnaround jumper from the right-center of the three-point line over elite defender PJ Tucker to seemingly put the Nets 110-109 in front with just a second left.

The Barclays Center became a scene of pandemonium as they felt Durant’s clutch shot had won them the match.

However, their elation was dimmed slightly by the reality that their No 7’s toe was on the three-point line following a review to the NBA’s Replay Center.

The look on Durant’s face said it all too. He knew he made a two-pointer instead of a three instantaneously. 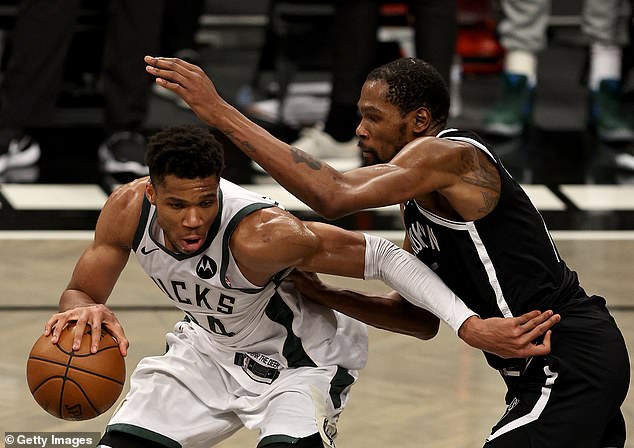 With Irving injured and Harden not fully-fit, after rushing back from right hamstring tightness, it was the will of Durant that almost inspired Steve Nash’s side to a famous victory.

Alas, it wasn’t to be as Durant and his team-mates run out of steam to lose 115-111. Durant finished with 48 points – a NBA record individual haul in a Game 7.

‘We got lucky his toe was on the line and they called it a two,’ Milwaukee’s Khris Middleton conceded post-match.

‘My big ass foot stepped on the line,’ Durant said. ‘I just saw how close I was to ending their season with that shot.’ 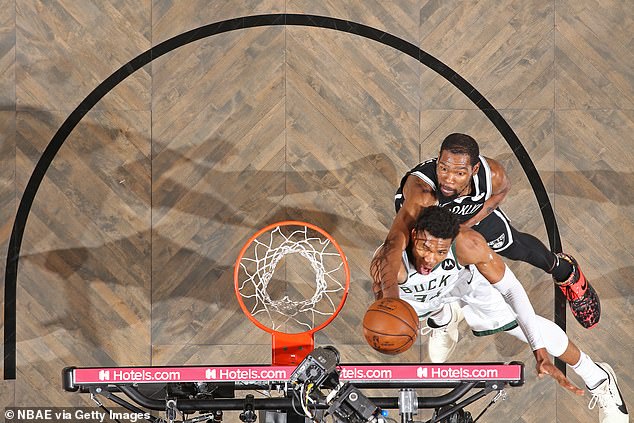 Half a season later, the ‘Big Three’ became the ‘Big Two’ as Harden swapped Brooklyn for Philadelphia and became a member of the 76ers.

Just hours before the trade deadline on February 10, the Nets and 76ers agreed a blockbuster deal that saw Harden and Paul Millsap going to Philadelphia and Ben Simmons, Seth Curry, Andre Drummond and two first-round draft picks heading to Brooklyn.

It was a major move for both franchises who saw unhappy All-Stars (Harden and Simmons) move in the opposite direction but for Brooklyn it represented another doomed deal in taking Harden in the first place. 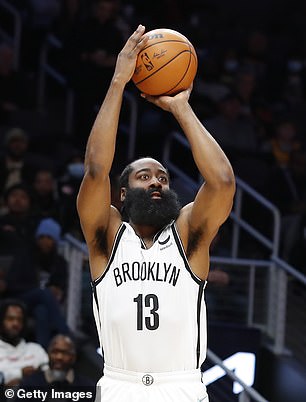 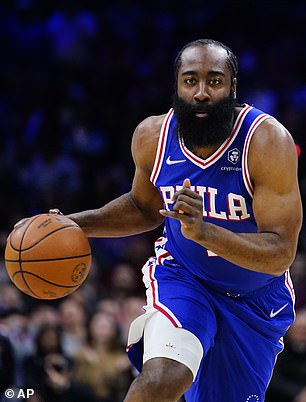 In February, Harden swapped Brooklyn for the Philadelphia 76ers after pushing for a trade

The Nets had traded four first-round picks and three swaps, plus center Jarrett Allen and Caris LeVert, a little over a year ago to acquire Harden after he forced his way out of the Houston Rockets.

It was a quick turnaround for Harden and the Nets. After signing Durant to a four-year, $198million (£178.5m) extension with the Nets on August 8, 2021 – attention turned to extending Harden and Irving once they were eligible to do so.

‘The contract, the money is going to be there. I don’t plan on leaving this organization and the situation we have,’ he stated.

‘My focus is on the season and winning a championship. The contract and all that stuff will play itself out as it should.’ 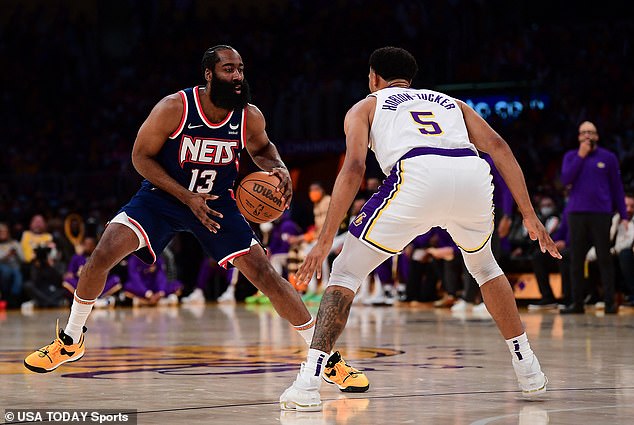 He grew increasingly disillusioned with Irving during the end of his time there, claim reports

With Durant suffering an MCL sprain in his left knee that will sideline him for the next four-to-six weeks in mid-January – the Nets were now relying on the Irving-Harden tangent to keep them in play-off contention. However, this is when problems between Irving and Harden reportedly intensified.

Their first game without Durant saw them travel to Cleveland (January 17) to take on the Cavaliers. However, the Athletic report that when Irving lit sage in the visitor’s locker room, Harden ‘looked at Kyrie like he had three heads.’

‘[There’s] Definitely a weird vibe between them,’ one source said. ‘You could tell Harden was annoyed, and Kyrie wasn’t feeling James.’

Eight days later (January 25), the Bleacher Report claimed that Harden wanted to seek pastures new. The guard was unhappy with Nash’s rotations, unhappy with the New York lifestyle and frustrated at Irving’s part-time status – which was exacerbated by Durant’s absence.

Two-and-half weeks later Harden was no longer a Brooklyn Net. 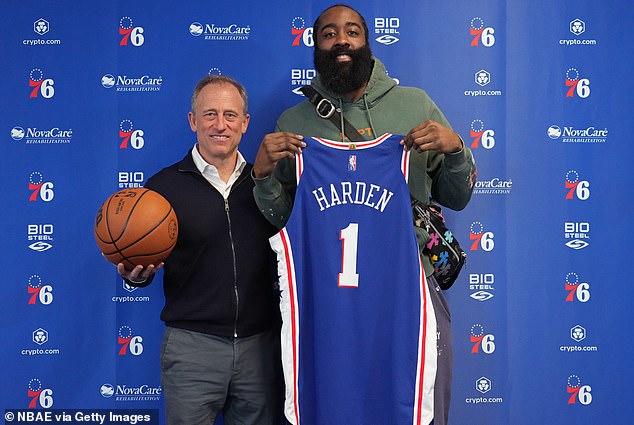 As mentioned in the previous section, Nash has been questioned by the stars in his ball club.

His tactics were one reported reason why Harden left but it’s not just him who he has irked.

Upon his installation as head coach, Irving instantly undermined him by declaring that the Nets don’t have a head coach. 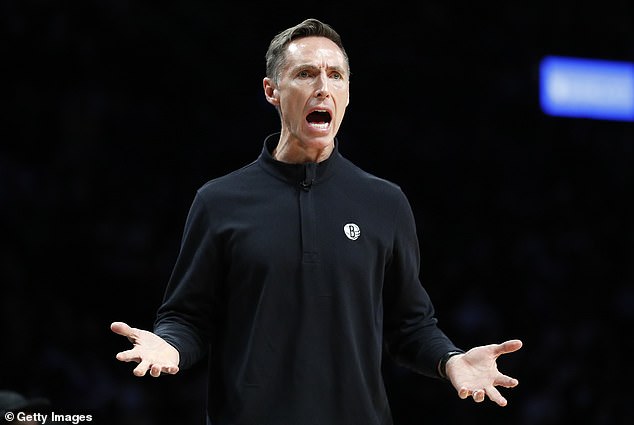 ‘I don’t really see us having a “head” coach,’ Irving told ‘The ETCs Podcast with Kevin Durant’.

Durant agreed with Irving’s stance on the leadership of the team and says it’s a ‘collaborative effort.’

The All-Star forward also added that assistant coach Jacque Vaughn could be a head coach if necessary.

Fast-forward to the present day and doubts over Nash’s coaching abilities have remained not just internally but externally through the media.

However, those uncertainties have only intensified this summer with Durant demanding Nash and general manager Sean Marks to be fired if he didn’t get his demand to be traded. 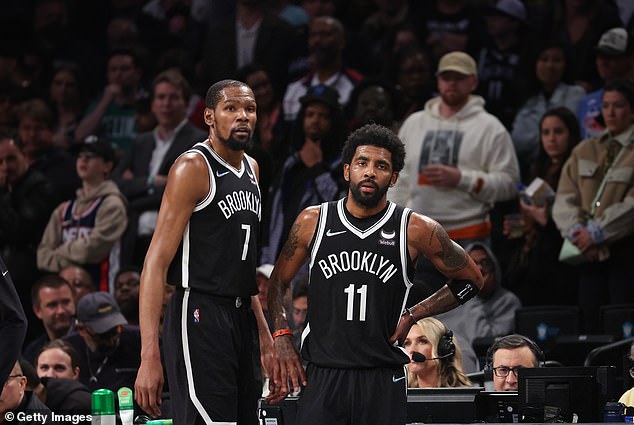 The ultimatum didn’t work though as Durant has since backed down and will remain a Net for this season.

But if that issue isn’t enough, the New York Post reported last month that Irving is as equally fed up with Nash and Marks.

‘Kyrie Irving hates these guys,’ a source said. ‘He feels that Nash is terrible and Marks is bad.’

‘KD came to the same conclusion,’ the source added. 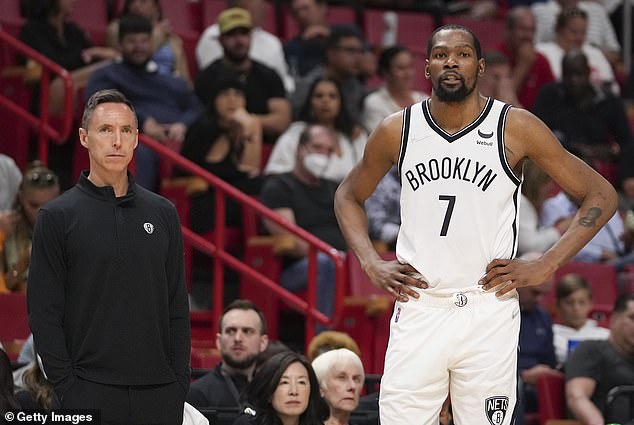 In his ultimatum this summer, Durant demanded Nash to be fired if he was to remain a Net

If the 2020-21 play-offs exit to the Bucks was a closely-fought affair, the same couldn’t be said for the Nets’ post-season 12 months on.

After a disjointed, to say the least, regular season all of the Nets’ problems reared their ugly head in devastating fashion against the Boston Celtics.

It was night and day between the two teams, with Boston a cohesive unit outplaying and outcoaching their opponents.

In 30 career play-off series this marked the first time Durant was swept and was also Irving’s first-ever opening-round exit.

Boston went on to reach the NBA Finals, where they lost to the Golden State Warriors, with a core in place and only optimism for the future.

For the Nets? Well they exited the play-offs with more questions than answers. And since they last played those questions have only increased ten-fold. 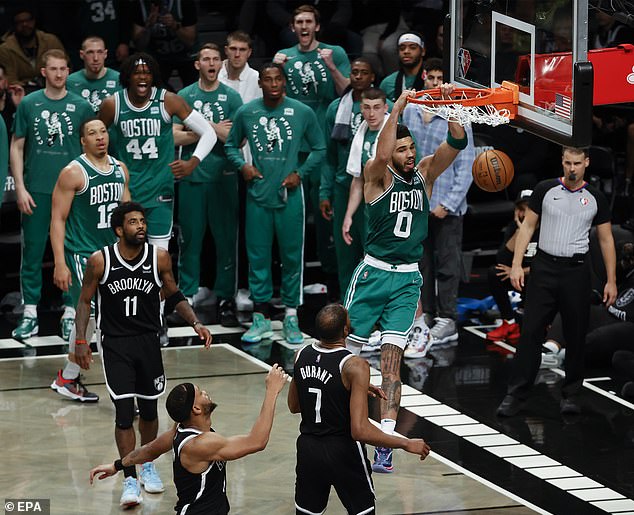