The Latest on the NCAA Tournament (all times Eastern):

Can another No. 11 seed join Loyola-Chicago in the Elite Eight?

Syracuse’s Frank Howard (23) holds the ball away from Duke’s Grayson Allen during the first half of a regional semifinal game in the NCAA men’s college basketball tournament Friday, March 23, 2018, in Omaha, Neb. (AP Photo/Charlie Neibergall)

The 11th-seeded Orange can do it if they can overcome a 34-27 halftime deficit to second-seeded Duke in a Midwest Region semifinal in Omaha, Nebraska. It was a tight game before the Blue Devils went on a 10-0 run to finish the first half.

The winner of this all-Atlantic Coast Conference affair meets Kansas on Sunday for the right to go to the Final Four.

Syracuse is giving second-seeded Duke all it can handle in Omaha.

The 11th-seeded Orange hit eight of its first 12 shots, all but one of them from inside the 3-point line, to pull within 19-17 on the heavily-favored Blue Devils midway through the first half.

That’s nearly half of the 44 points Syracuse scored in an ugly 16-point loss in Cameron Indoor Stadium on Feb. 24. But Duke, which made just two 3s in that victory, has already knocked down a few from beyond the arc – a key in defeating Syracuse’s headache-inducing 2-3 zone.

The winner faces Kansas in the Midwest Region final on Sunday.

The all-Atlantic Coast Conference matchup in the Sweet 16 is underway in Omaha. Second-seeded Duke and No. 11 seed Syracuse have tipped off for the right to face top-seeded Kansas in the Elite Eight.

There was only one regular-season meeting, and it wasn’t a high-scoring one.

The Blue Devils didn’t find a lot of freedom against the Orange’s zone. Duke shot 41.5 percent and made 2 of 18 3s despite playing in the friendly confines of Cameron Indoor Stadium.

Top-seeded Villanova beat the press of West Virginia and advanced to the Elite Eight of the NCAA Tournament.

Jalen Brunson scored 27 points to lead the Wildcats to a 90-78 victory over fifth-seeded West Virginia. Villanova will play the winner of the regional semifinal later Friday night between No. 2 seed Purdue and third-seeded Texas Tech for a spot in the Final Four.

Daxter Miles Jr. scored 16 for the Mountaineers before fouling out with just over two minutes left. Sagaba Konate added 12 points with nine rebounds.

Kansas made it through the Sweet 16 for the third year in a row as a No. 1 seed after surviving a late scare and beating fifth-seeded Clemson 80-76 in a Midwest Region semifinal.

Now the Jayhawks will try to get through the Elite Eight for the first time since 2012, when they lost the national title to Kentucky. They’ll play Sunday against the winner of Friday night’s second semifinal between No. 2 seed Duke and 11-seed Syracuse.

Clemson, in a regional semifinal for the first time since 1997, had a six-minute field goal drought and shot 36 percent in the first half. The Tigers trailed by 20 early in the second half.

Malik Newman scored 17 points to lead Kansas, Devonte Graham added 16 and Udoka Azubuike had 14 points and 11 rebounds before fouling out with 2:30 left.

DeVoe finished with a career-high 31 points.

Villanova has turned back a West Virginia run and retaken the lead midway through the second half.

The Mountaineers held the Wildcats without a basket for more than three minutes while opening up a six-point lead with 11 minutes to play. But top-seeded Villanova roared back will 11 straight points to make it 65-60.

After Mikal Bridges gave Villanova the lead with a 3-pointer, Omari Spellman produced an emphatic dunk on James Bolden. At the other end, Spellman slammed in a putback after Phil Booth’s miss to make it a five-point game.

West Virginia cut the lead to three before the under-eight minute timeout.

Down by 20 points at one point in the second half, Clemson has used a 26-12 surge to pull within 74-68 in its Midwest Region semifinal against Kansas.

The lineups are out for the Purdue-Texas Tech game and Isaac Hass isn’t in it.

The Boilermakers center broke his elbow in their NCAA tournament opener and hasn’t played since. That hasn’t stopped him from trying, though.

He’s been out on the court practicing with his teammates, trying to prove to coach Matt Painter that he can contribute at least a few minutes. The Purdue engineering department was even on the job, working up a special brace that was approved by the NCAA.

But Painter said Haas can’t play unless he can rebound with two hands and shoot a free throw right-handed. Haas couldn’t do that, as of Thursday.

Redshirt freshman Matt Haarms was listed in the lineup instead.

The players are getting a bit of a history lesson at this year’s East regional in Boston.

The banners honoring the Celtics and Bruins championships and retired numbers were allowed to remain in the rafters at the TD Garden this year – a change from previous events here.

“Part of the allure of being in Boston is playing beneath our championship banners,” TD Garden president Amy Latimer said. “We are proud to have them on display and part of the student-athlete experience.”

When NCAA tournament last came to town in 2012, the banners were replaced by ones noting past college basketball champions. The 17 Celtics championship banners and six for the Bruins were brought to a Salvation Army facility, where fans lined up to take pictures with them.

The Celtics also have three banners to honor their 23 retired numbers. The Bruins have retired 10 numbers.

Clemson is trying to get back into its Midwest Region semifinal game against Kansas after falling behind by 20 points.

The lead was down to 13 with 5:57 left. Malik Newman led Kansas with 16 points. The Jayhawks were shooting 51 percent from the floor to 43 percent for Clemson.

Kansas’ perimeter shooting is starting to heat up, and the top-seeded Jayhawks have opened a 60-42 lead over fifth-seeded Clemson with about 13 minutes left in their Midwest Region semifinal.

Lagerald Vick, Malik Newman and Devonte Graham hit 3-pointers in the first 1:07 of the second half as the Jayhawks went ahead by 20 points. Kansas is 4 for 5 from distance the first five minutes of the half after going 4 of 13 in the opening 20 minutes.

Gabe Devoe has scored a game-high 20 points for the Tigers, who are shooting just 39.5 percent from the floor.

The Wildcats came out firing, connecting on their first seven field goals. They handled the Mountaineers’ pressure early. But the Wildcats had three turnovers over a 1:05 stretch during an 8-0 Mountaineers run that briefly put them in front 33-30.

Villanova finished with 10 turnovers for the half. But the Wildcats were able to take a lead into the locker room thanks in part to 6 of 13 shooting from the 3-point line. West Virginia holds an 18-14 rebounding edge.

Both teams have key players with foul issues. Brunson and Mikal Bridges for Villanova and Jevon Carter for West Virginia have two apiece.

Press Virginia is causing all kinds of problems for Villanova.

The Mountaineers have applied full-court pressure after every basket, and it helped them open a 35-33 lead with 3:30 left in the first half of the regional semifinal. The press caused three Villanova turnovers in a stretch of 65 seconds that helped West Virginia run off eight points in a row.

In all, the Wildcats had nine turnovers and West Virginia had five steals late in the first half.

Bob Huggins said on Thursday he thinks his team would benefit from a fast-paced game.

This one’s on its way.

It’s a tight game so far in the East Region semifinal between Villanova and West Virginia.

The top-seeded Wildcats are being tested by the fifth-seeded Mountaineers’ pressure defense. Each team had six turnovers with about 5 minutes left.

Top-seeded Kansas is capitalizing on its mismatch in the post with Udoka Azubuike and Silvio De Sousa and leads fifth-seeded Clemson 40-27 at halftime of their Midwest Region semifinal.

The two Jayhawks have combined for 16 points, with four dunks, on 7-of-9 shooting. They scored six points as the Jayhawks closed on a 15-5 run and held Clemson without a field goal for 6 minutes.

Clemson’s season scoring leader, Marcquise Reed, didn’t make his first basket until a minute was left in the half. A flagrant-1 foul was called on the play on Clemson’s Elijah Thomas, who pushed his left forearm into Silvio De Sousa’s head under the basket as Reed was shooting.

De Sousa made the free throws and Lagerald Vick followed with a 3-pointer to put the Jayhawks up 13 at the break.

The Clemson-Kansas winner plays in the regional final Sunday against the winner of Friday night’s other semifinal between second-seeded Duke and 11th-seeded Syracuse.

Clemson has gone cold in the Midwest Region semifinal against top-seeded Kansas.

Kansas leads 33-22 with 2 1/2 minutes left in the first half after the Tigers have missed 8 of their last 9 shots.

Azubuike and his backup, Silvio De Sousa, have combined for 14 points and four dunks on 7-of-9 shooting.

Clemson is shooting 36 percent and has committed eight turnovers. 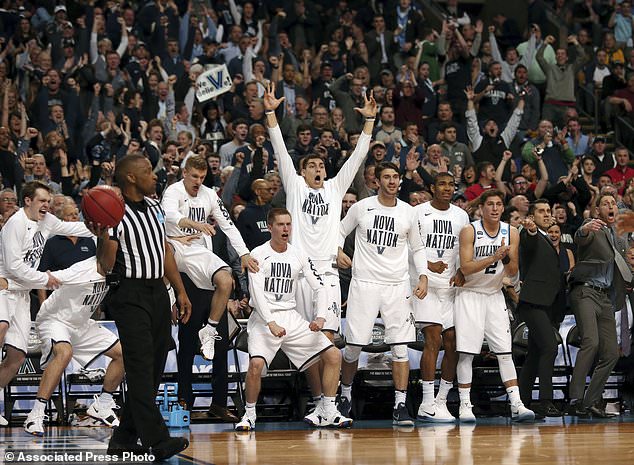 Players on the Villanova bench celebrates a Villanova basket against West Virginia during the second half of an NCAA men’s college basketball tournament regional semifinal Friday, March 23, 2018, in Boston. (AP Photo/Mary Schwalm) 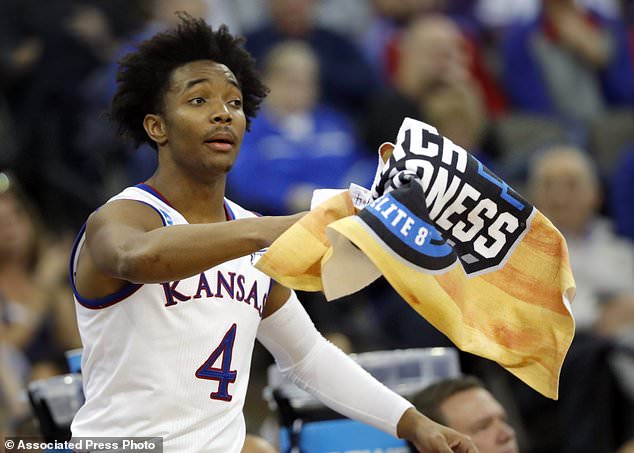 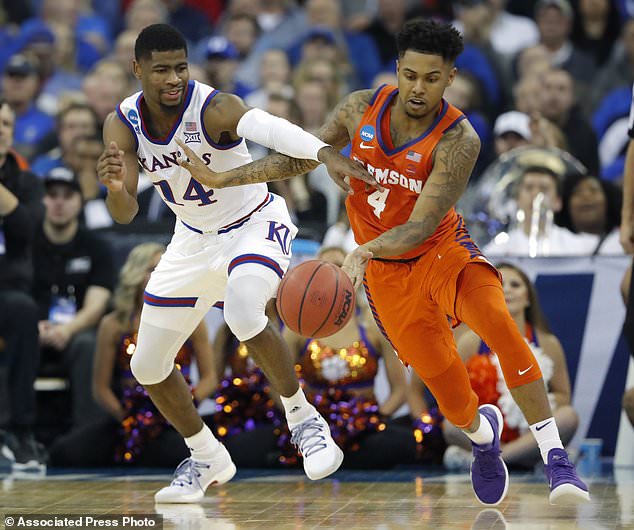 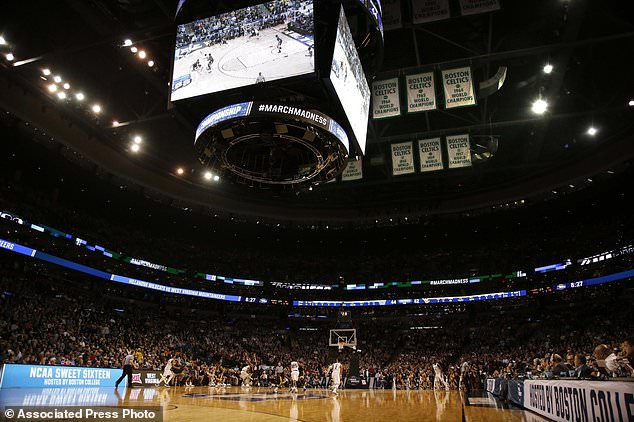 Boston Celtics championship banners hang in the rafters at TD Garden during the first half of an NCAA men’s college basketball tournament regional semifinal Friday, March 23, 2018, in Boston. The NCAA permitted them to remain in place this year, though had made the building remove them in prior years. (AP Photo/Mary Schwalm) 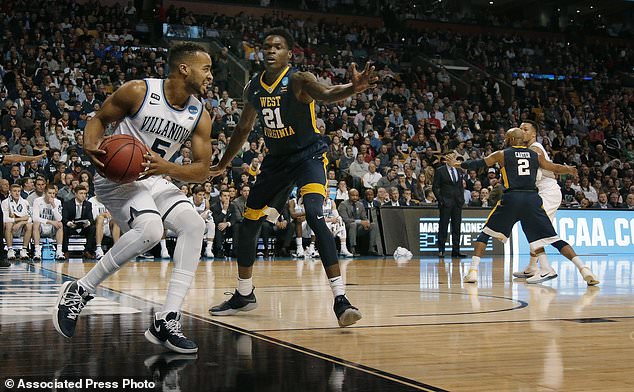 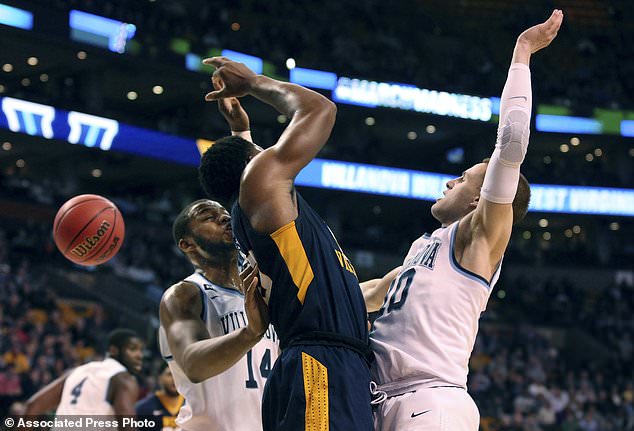 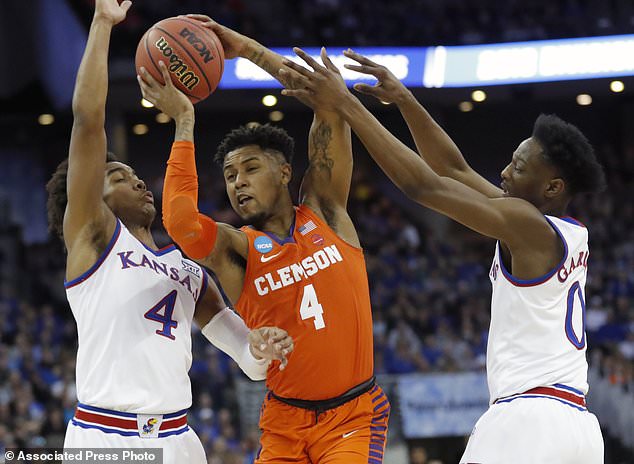 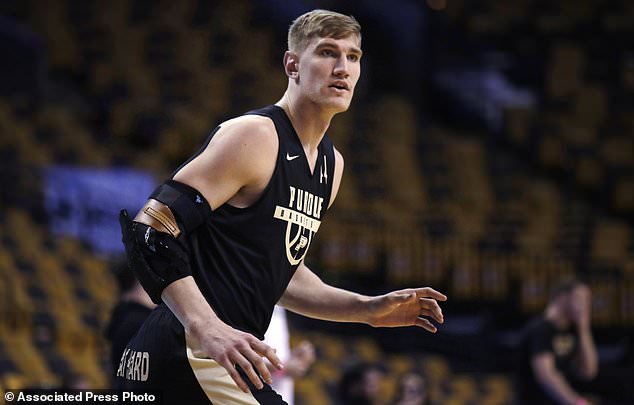 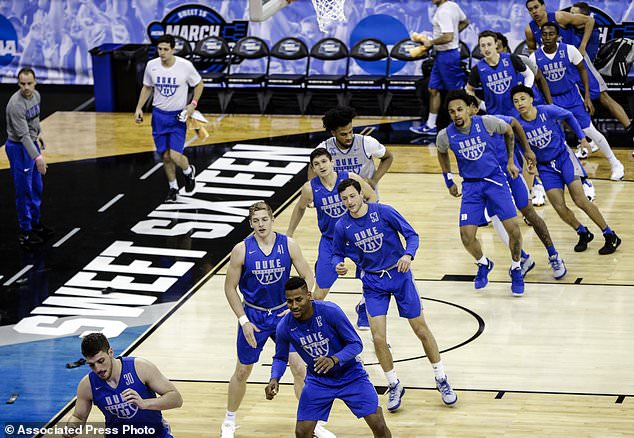 Duke players warm up at the beginning of practice at the NCAA men’s college basketball tournament in Omaha, Neb., Thursday, March 22, 2018. Duke faces Syracuse in a regional semifinal on Friday. (AP Photo/Nati Harnik)