Almost 30million people in England have managed to avoid Covid since the pandemic began, No10’s scientific advisers believe amid warning signs that the outbreak is growing again.

Cambridge University scientists tasked with tracking the pandemic suspect only 51.8 per cent of the population has caught the virus in the last two years.

Experts told MailOnline they were ‘not particularly concerned’ by the fact that half of the country have not been exposed to the virus. It ‘doesn’t mean the rest are susceptible’, according to Dr Thomas Woolley, a mathematical biologist at Cardiff University.

Officials estimate that 98 per cent of people in England have antibodies against Covid thanks to high vaccination rates and the combination of jabs and natural immunity has shown to provide the strongest protection.

He added: ‘Natural infection gives longer-lasting protection than any vaccine and the now-predominant Omicron variant generally gives a mild infection.

‘Consequently, the more low-risk people who’re infected the better, for it will build the strongest wall of immunity, cementing and accelerating our inevitable move from pandemic to endemic.’

It comes after daily Covid cases in the UK rose for three days in a row before the weekend, with the outbreak now likely growing. The Government has stopped releasing the daily figures at weekends but an update this afternoon will reveal if that trend has changed.

The rise in infections coincides with the emergence of an even more infectious strain of Omicron called BA.2, which has become dominant across England. It also follows Boris Johnson’s decision to ditch all of England’s final Covid restrictions, including the requirement to isolate when infected.

But warning against future lockdown curbs, Professor Livermore said eventually everyone will catch Covid and ‘restriction merely drags out this process, possibly to a time when a less benign variant is predominant’.

Scientists also insist they aren’t concerned by the Cambridge team’s estimate, arguing the grim tallies of 1,000-plus deaths a day are consigned to history forever.

Modelling from Cambridge University scientists suggests only 51.8 per cent of people in England had caught the virus by February 23, two years into the pandemic. Despite high case levels since Omicron emerged, which peaked at 234,765 per day in January, 48.2 per cent of the population — 27.3million people — are yet to have a first infection, according to the estimates. The map shows the Covid attack rate — the proportion of the population that have been infected — across the country, with regional prevalence varying from 45.3 per cent in the North West and South West to 60.8 per cent in London

Each of the experts sit on the Scientific Pandemic Influenza Group on Modelling (SPI-M) panel, an influential sub-committee of SAGE.

Why ARE cases going up again… and does it mean the NHS could still be overwhelmed?

Covid cases in the UK have risen for four days in a row, according to the most recent data up to Friday.

But hospitalisations and deaths are trending downwards, even though there is a two to three week lag behind infections.

Changes to Covid restrictions in the UK, a new more infectious variant becoming dominant in England and a lack of natural immunity among the population could all be driving factors in the rise.

Boris Johnson lifted all remaining Covid legal requirements in England on February 24, including the rule to self-isolate when positive and wear masks on public transport.

While guidance is in place requesting that people still stay-at-home if they test positive, more Britons may be mixing with others while infected.

No10’s scientists warned the rule easing would increase transmission by between 25 and 80 per cent if people returned to pre-pandemic mixing.

The increase in cases coincides with the rise of the even more transmissible Omicron subvariant BA.2, which health chiefs say is now dominant in England.

The UKHSA revealed BA.2 was behind 52 per cent of all cases in the seven days up to February 20. The sub-variant has completed its rapid rise to dominance just a month after it was first spotted in the UK.

BA.2 carries many of the same mutations as Omicron, alongside many new ones that make it more transmissible.

Experts told MailOnline that the more infectious strain will likely contribute to a rise in cases.

Latest estimates from No10’s scientists suggest around half of people in England have never had Covid.

Just 51.8 per cent of the population had caught the virus by February 23, according to Cambridge University researchers and UK Health Security Agency officials.

Could the NHS be overwhelmed?

The success of the vaccine rollout, coupled with half of the population being ‘super immune’ to Covid, is squashing the risk of people becoming severely unwell with the virus.

The number of Covid patients in hospital peaked around 20,000 in January, nearly half of the 38,000 in hospital at the peak one year earlier, before the vaccine rollout.

And No10 is planning a spring vaccination rollout providing an extra dose to the most vulnerable to further increase their protection against future waves.

However, medics told MailOnline that high levels of the virus increases pressure on hospitals, which have to keep infected patients away from the non-infected. They warned this could have an impact on clearing the NHS backlog.

Their estimates, published on February 25, state 51.8 per cent of people in England were infected with Covid.

Modelling suggests infection rates have been highest in London and the North East, where three in five people have so far had the virus.

The team also believe there have been 41.7million infections — including reinfections — since the first UK case of Covid in January 2020.

The infection prevalence estimates are based on Covid infection data from the Government and NHS, which they run through their mathematical model.

Dr David Strain, a medical lecturer at the University of Exeter, told MailOnline: ‘There is absolutely scope for another Omicron surge in infections.’

And with Omicron’s increased infectivity and the emergence of the even more infectious BA.2 strain, people who have been infected before are still susceptible to getting it again, he said.

But he admitted that the majority of the people to have escaped Covid will still be vaccinated, meaning the risk of people becoming severely unwell with the virus from current variants is slim.

Omicron’s milder nature, and the build-up of immunity from vaccines and previous waves, blunted the ultra-transmissible variant over the festive period, which saw up to 430,000 people test positive every day.

Government advisers had warned the outbreak could lead to 6,000 deaths a day, sparking calls for lockdown before Christmas.

But the fears were over-egged and daily deaths peaked at 300 in January.

Professor Kevin McConway, a statistician at the Open University, told MailOnline the latest estimate ‘doesn’t particularly concern me’ because it is ‘only part of the story’.

Dr Thomas Woolley, a mathematical biologist at Cardiff University, added that just because only half of people in England have had Covid, it ‘doesn’t mean that the rest are susceptible’.

He said: ‘The huge success of the vaccination programme has meant the many of the remaining people may never get it. The vaccines are removing people from the susceptible population, as well as reducing the severity of the disease.

‘Both of these factors reduce the likelihood of another outbreak, at least of Omicron.

‘The trouble will come now if immunisation and boosters aren’t maintained. Waning resistance or a new mutation in the population is what will drive the next wave.’

Studies have suggested that people who have been infected and fully-vaccinated have super immunity and 10-times more effective antibodies than those in people who are only vaccinated.

Experts said the combination of vaccination and infection could suppress the virus to a mostly mild endemic infection, similar to other seasonal respiratory viruses.

Professor Livermore told MailOnline Iceland removed all Covid restrictions for vaccinated and unvaccinated people on the basis that ‘widespread societal resistance to Covid is the main route out of the epidemic’.

The country’s health chiefs last month said ‘as many people as possible needed to be infected with the virus as the vaccines are not enough, even though they provide good protection against serious illness’.

Professor Livermore said: ‘I think they’ve got it right.’

It comes as confirmed Covid cases in the UK rose to 44,740 on Friday – the latest day with data. It marked a 40 per cent rise in a week.

The rise came less than a week after No10 ditched all of England’s remaining restrictions and coincides with BA.2 becoming dominant in England in late February.

Experts warned the strain may cause some fluctuations in case rates, but insisted there is no evidence it is more severe than the original strain.

But the average number of people being admitted to hospitals across the UK is continuing to fall. 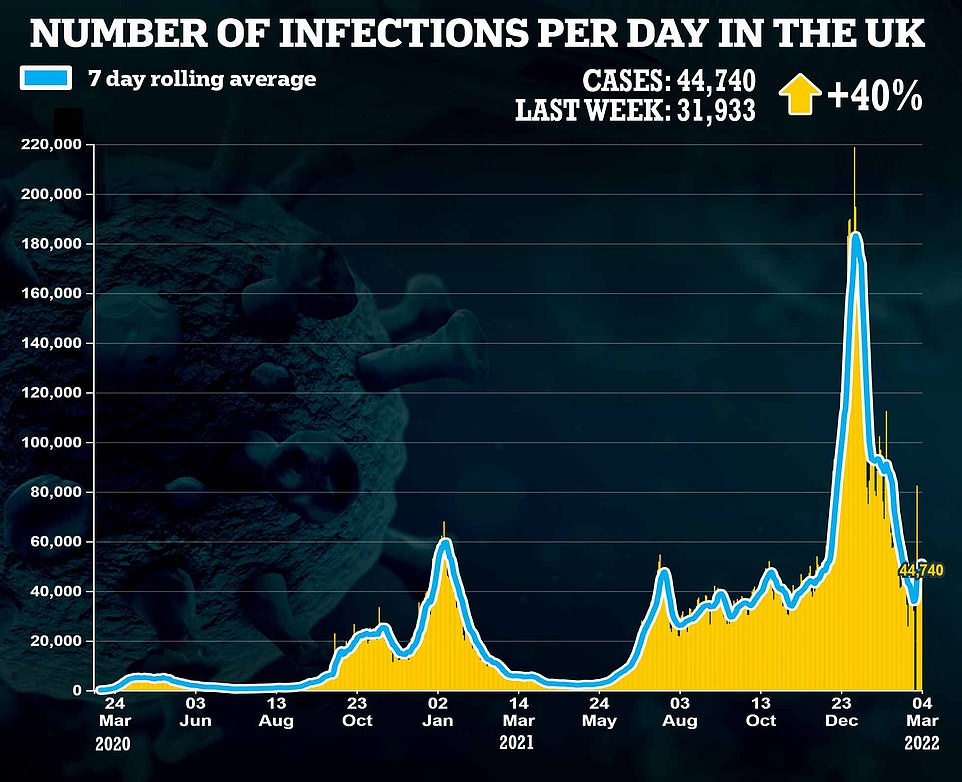 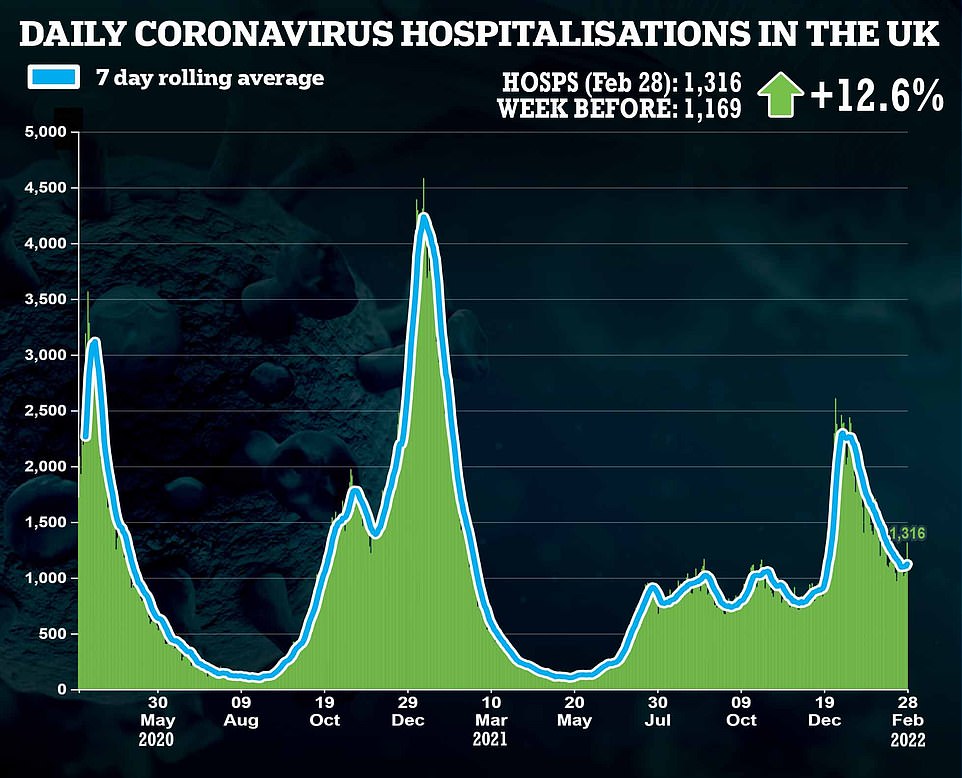 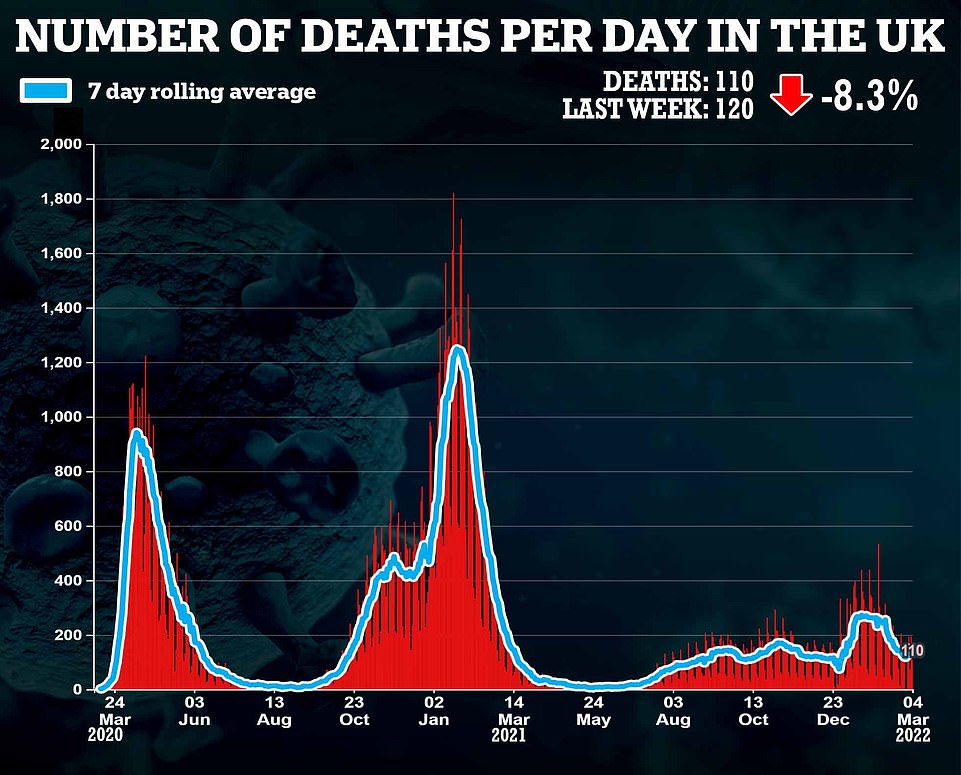