The victim toll of McDonald’s salad has shot up once again.

Another 81 people have developed explosive diarrhea from the dishes, bringing the total number of sickened people to 476 across 15 states.

At least 21 of them have needed hospital treatment for their painful symptoms.

The illness is cyclosporiasis, caused by the Cyclospora parasite, which causes vomiting and ‘explosive’ diarrhea a week or even more than a month after eating the offending food.

Despite McDonald’s pulling its salad blend on July 20, the number of cases keeps climbing, and today the FDA said it is zeroing in on the origin of the romaine and carrots used to cultivate the calorie-laden meals.

As of August 17, more than 500 people in 15 states had been sickened by McDonald’s salads. Pictured: the Southwest Grilled Chicken Salad (350 calories)

When the outbreak was first reported in May, it was localized to Illinois and Iowa.

Now, it has spread across the country – with new infections reported as recently as Thursday, even though McDonald’s swapped its salad blend for another on July 20.

Three months into the saga, the chain still has yet to identify the offending ingredient, since infections had been linked to all four of the salads on the menu.

The US Food and Drug Administration (FDA), which deals with regulation, said on Friday that agents are working with McDonald’s to understand what the source of the infection could be.

Meanwhile, agents at the Centers for Disease Control and Prevention (CDC), which deals with citizens’ health, is grappling to tally up all of the cases.

‘Illnesses that started after June 14, 2018, might not have been reported yet due to the time it takes between when a person becomes ill and when the illness is reported. For cyclospora infections, this can take up to six weeks,’ the CDC said in a statement.

They warn the number may be much higher than currently quoted, since they are still fielding all the reports in the last week or so.

Nationwide, there are four salads on the menu – two indulgent ones, and two ‘healthier’ versions – as well as a side salad.

There is also a Bancon Ranch Grilled Chicken Salad (320 calories), which is the same but with grilled instead of breaded chicken.

The Southwest Buttermilk Crispy Chicken Salad (520) pairs the breaded chicken with black beans, corn, tomatoes, and peppers with two types of cheese, tortillas strips cilantro, lime and ranch dressing – on top of the same lettuce blend as before.

Lastly, there is the Southwest Grilled Chicken Salad (350 calories), swapping out the buttermilk crumbs for a grilled fillet.

The salads have been a significant part of McDonald’s bid to jump on the health-conscious bandwagon – though they are not that much healthier compared to the rest of the menu. A double cheeseburger has 440 calories, and a Bacon McDouble has 450 calories.

The Iowa Public Health Department said it identified 15 cases linked to the same illness and parasite who ate there in June and July.

Dr Patricia Quinlisk, Iowa’s public health medical director and epidemiologist, said anyone with symptoms who ate a McDonald’s salad should get tested.

‘Anyone who ate these salads since the middle of June and who developed diarrhea, especially watery diarrhea and fatigue, should see their health care provider,’ she said.

McDonald’s replaced its lettuce blend on July 20, after pulling a blend from 3,000 stores in 15 states that they feared might be to blame.

It remains to be seen whether that will do the trick.

People can become infected by consuming food or water contaminated with the microscopic parasite.

The parasite is usually found in developing countries but there have been several outbreaks in the US in the past few years. 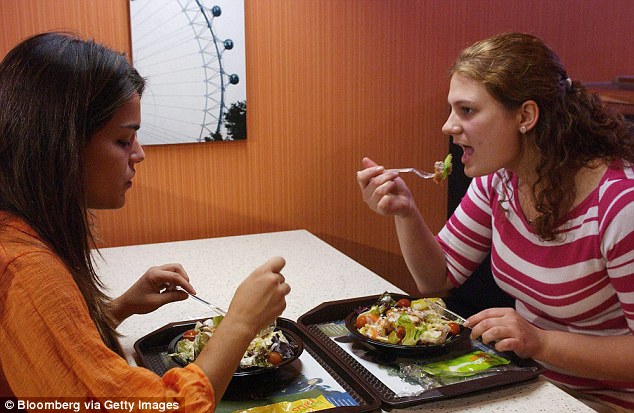 The Centers for Disease Control and Prevention (CDC), which deals with citizens’ health, is grappling to tally up all of the cases