As the Republican National Committee moves its convention to Florida, 58 per cent of voters in Jacksonville claimed in a poll released Wednesday that they don’t want the events to take place there.

While six in 10 are against the convention being held in their hometown, 42 per cent of respondents in the University of North Florida poll said they support the move of location.

Responses relied heavily on the individual’s party identification, with only 10 per cent of Democratic Jacksonville voters claiming they either somewhat or strongly support the convention being held there and 81 per cent of Republicans feeling the same way.

But of independent voters, 62 percent said in the survey taken June 17-22 that they were opposed to the convention being held there.

The RNC announced earlier this month it is moving its marquee events for the August convention, including President Doanld Trump’s nomination acceptance speech, to Jacksonville, Florida.

58 per cent of registered voters in Jacksonville, Florida are opposed to the Republican National Committee holding its convention there in August, while 42 per cent support the move 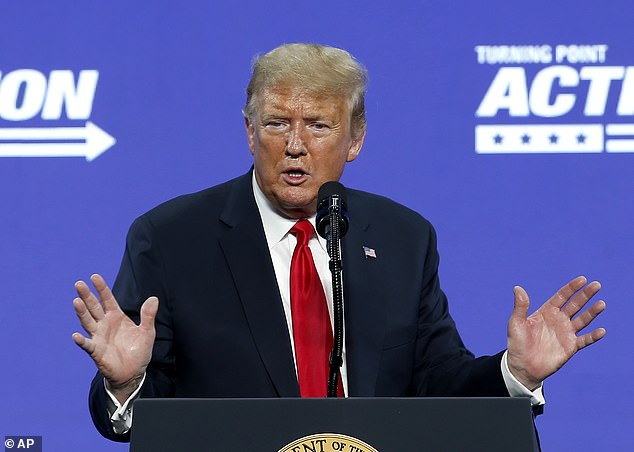 Trump urged the RNC to move the location of his coronation speech, as well as other marquee events, so he could pack an arena in Florida after North Carolina, the original site of the convention, refused to allow his desired large gathering

Florida saw its biggest day increase of new cases of coronavirus, with 5,500 new cases on Sunday, and 71 per cent of people said they are concerned the convention could increase the spread of COVID-19 in the state

The right-leaning city, which went 48.6 per cent for Trump in 2016, offered to host the event after the president complained about the conditions Charlotte, the original host city, was setting forth.

Trump also changed his permanent residence to the swing state last year, and now votes there, as he spends most of his winters snow-birding at his Mar-a-Lago resort.

Of the voters polled in Jacksonville, 71 per cent said they are concerned that COVID-19 will spread at a higher rate due to the convention.

The concerns come as Florida just saw its record high number of new cases on Wednesday with more than 5,500 new positive tests for coronavirus.

Florida Republican Senator Rick Scott said Tuesday that he is insisting attendees wear masks and social distance at the event.

Outside of concerns over coronavirus, 65 per cent of the 2,524 registered voters living in Jacksonville said they worried about ‘social unrest’ that could surround the convention.

The move in location came after Democrats in North Carolina would not allow Trump’s desired packed arena due to continuing concerns over coronavirus.

Some smaller events will still be held in Charlotte, North Carolina so the RNC does not incur any legal costs for failing to fulfil its contract to hold the quadrennial event.

Although Duval County, which encompasses Jacksonville, has gone red it in the past, it has been trending blue recently.

Florida Governor Ron DeSantis, a Republican, lost the county by 4.3 percentage points in the 2018 midterm elections.