Nearly a quarter of Delhi’s population has been infected with coronavirus, according to antibody tests which suggest that millions of cases have gone undetected.

India’s capital territory has officially recorded 126,000 cases, making it one of the world’s worst-hit capitals – with a higher infection rate than London or Rome, although lower than Moscow or Brasilia.

However, the true figure could be as high as 6.5million after Indian disease experts tested more than 20,000 people across Delhi – a region of 29million people – and found that 23.4 per cent of them had developed antibodies against Covid-19.

Experts say the proportion of people infected could be even higher in slum areas where social distancing is near-impossible.

Delhi, in blue, has been one of the world’s worst-affected capital cities (as shown on this graph) – and antibody tests suggest the true scale of the crisis could be far worse. Brasilia (in brown) has also piled up huge numbers of cases in recent weeks, while European capitals such as London, Rome and Madrid saw their outbreaks peak earlier in the year 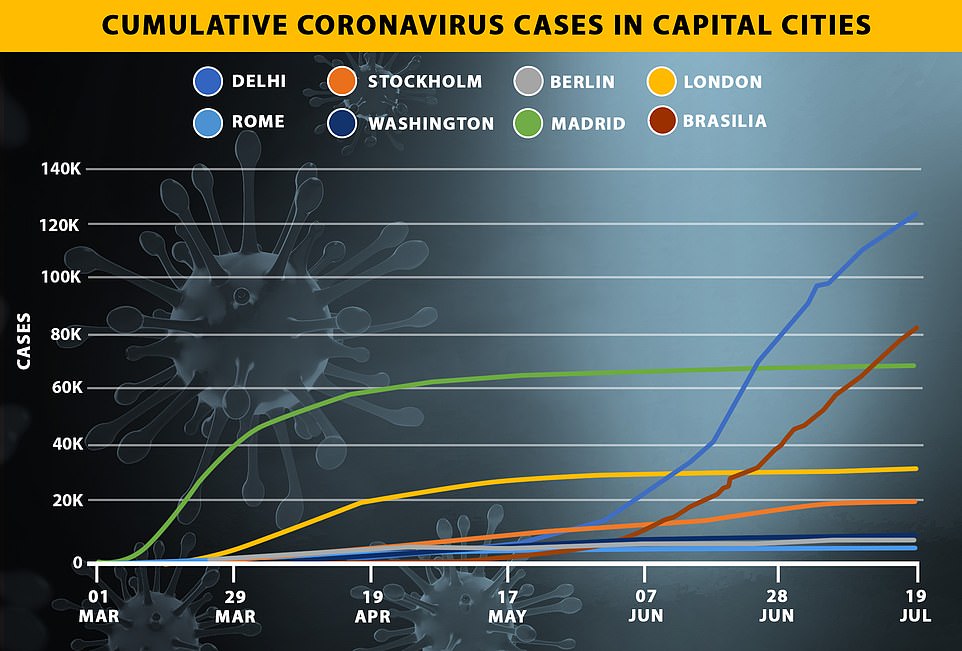 Delhi (again in blue) has seen its total number of virus cases soar past that in European capitals such as London and Madrid, and its per-capita infection rate is higher than in some of those cities. Brasilia has also seen more than 80,000 cases in the South American country’s huge outbreak

While India as a whole is seeing record spikes in cases, Delhi has seen a slowdown in confirmed infections in recent weeks.

On Tuesday, the number of new cases in Delhi was below 1,000 for the first time since June 1, with 954 new infections reported.

The figure peaked on June 23 when 3,947 new infections were reported in a single day, followed by another 3,788 the next day.

However, health experts have long feared that many cases and deaths are being missed in India where testing was initially slow and the health system is stretched.

The antibody tests provide further evidence of this, after India’s National Center for Disease Control found widespread signs of infection in the 21,387 people it tested.

Adjusting for rogue results, scientists estimated that 22.86 per cent of Delhi’s population had been infected by the virus at some stage.

Dr Jayaprakash Muliyil, an epidemiologist at the Christian Medical College in Vellore, said the percentage of people infected could be much higher in certain areas, such as slums.

‘You need to look at different clusters,’ said Dr Muliyil, who is advising the government on virus surveillance.

India’s health ministry, which published the study on Tuesday, said it ‘indicates that a large number of infected persons remain asymptomatic’.

Even if a quarter of people have been infected, 75 per cent are still vulnerable – including some older people, said Sujeet Kumar Singh, head of the National Centre for Disease Control.

The study was conducted between June 27 and July 10, and Dr Muliyil said the number of infections has likely increased since then.

Official statistics alone show another 17,183 cases in Delhi since July 10, while India as a whole has piled up more than 440,000 in that time. 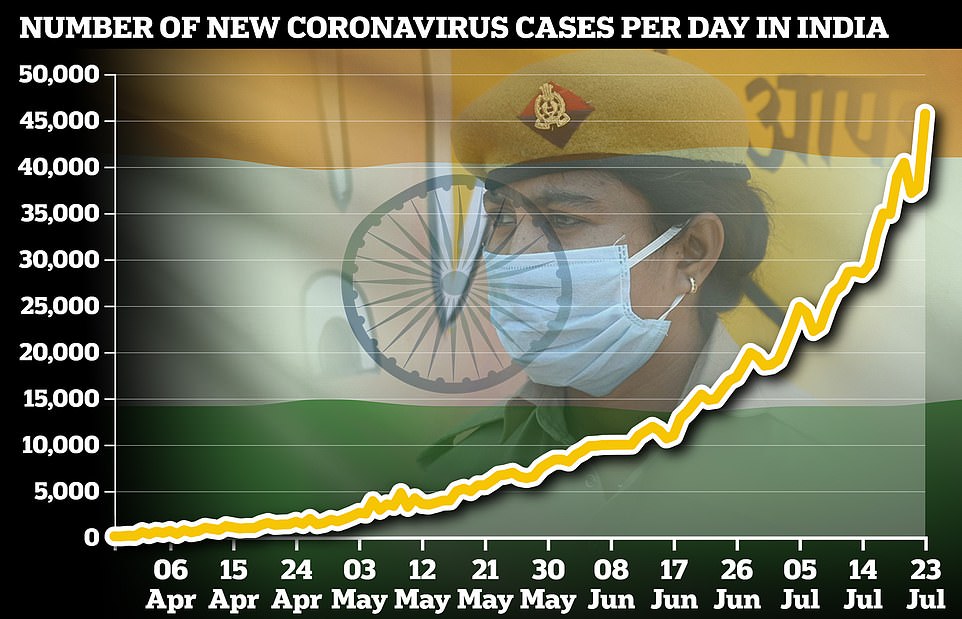 India saw yet another record spike in coronavirus cases today as 45,720 new infections brought the total past 1.2million 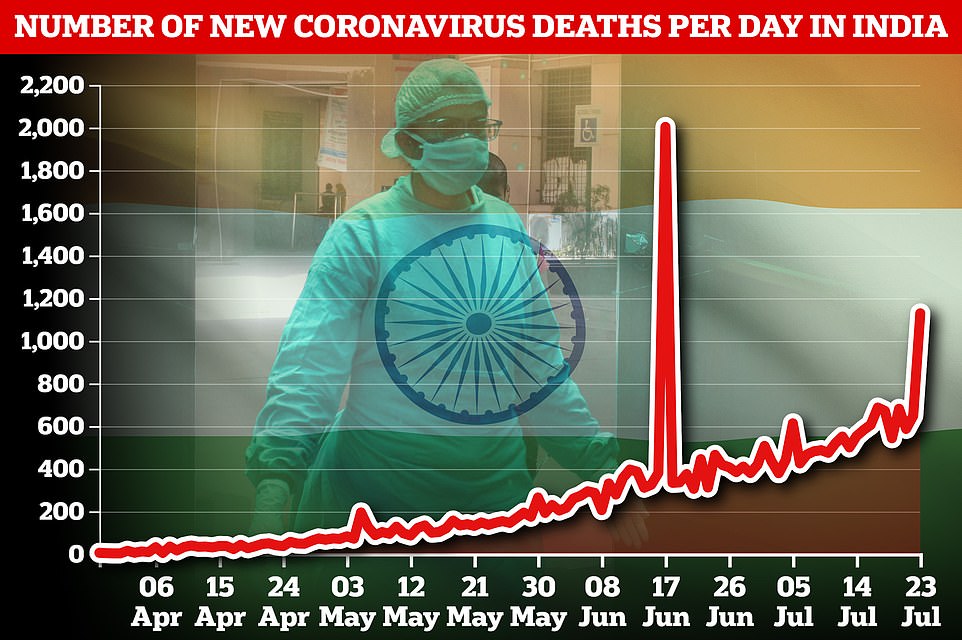 The death toll rose to 29,861 on Thursday after another 1,129 fatalities, only the second time that the figure has risen by more than 1,000 in a day 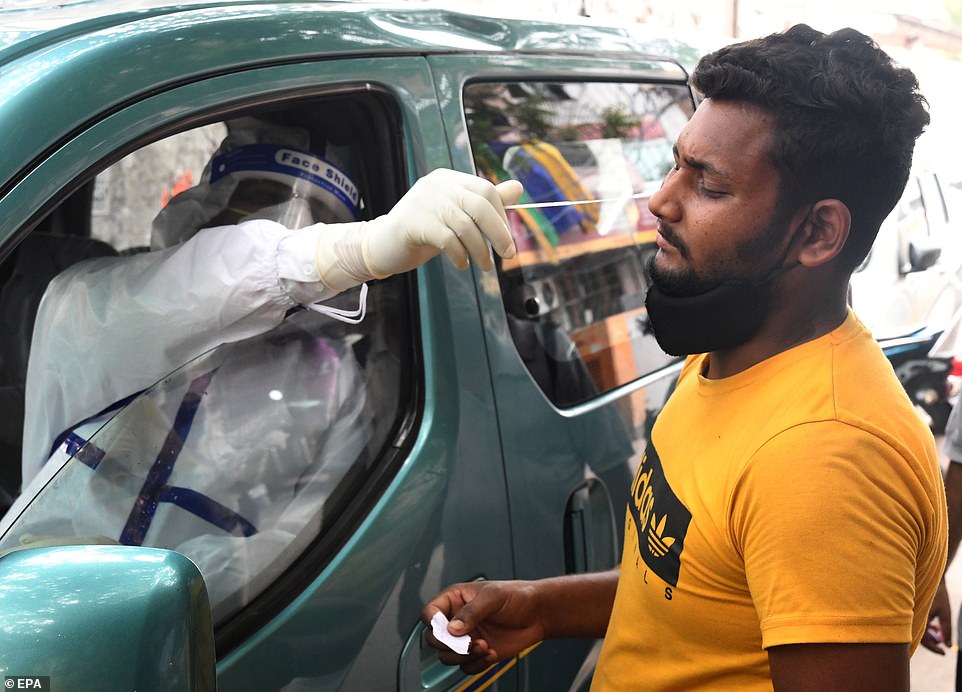 Delhi has officially recorded 3,719 deaths from the disease, up by 29 in the latest update on Wednesday.

However, experts suspect that many virus deaths are not being picked up in official figures, especially outside the cities where testing is more limited.

Even adjusting for its huge population, Delhi has seen a higher infection rate than the capitals of some European countries which have been harder-hit overall.

For example, Delhi’s 126,203 confirmed cases among 29million people are a higher rate than London’s 34,695 infections in a city of nearly nine million.

By contrast, Britain’s infection rate is worse than India’s overall, because India has seen only four times as many cases for a population 20 times larger.

Delhi has also been harder hit than Rome, which has recorded 6,183 cases but was never at the epicentre of Italy’s outbreak, and Berlin which has had 8,859 cases. However, the Moscow region has seen more infections than Delhi with 235,971 confirmed cases.

Stockholm has also suffered worse than Delhi on a per-capita basis after recording nearly 23,000 infections, more than a quarter of Sweden’s cases.

Stockholm has previously conducted similar antibody tests to Delhi, which showed that only 7.3 per cent of the population had been infected as of May.

Swedish officials had previously voiced hope that the country was on the road towards ‘herd immunity’ after controversially choosing not to go into lockdown.

Herd immunity is achieved when so many people are immune to a disease that it will not spread through the population and the epidemic will come to a natural stop.

However, because Covid-19 is a new disease, it is still not fully clear to what extent people become immune after recovering from it.

Studies in Britain, Germany, China and elsewhere have suggested that natural antibodies may fade away after a few months, meaning immunity is limited.

Scientists around the world are racing to develop a vaccine which is seen as the only certain way of bringing the pandemic to a standstill, but even in the best-case scenario it is likely to be many months before a vaccine is widely available. 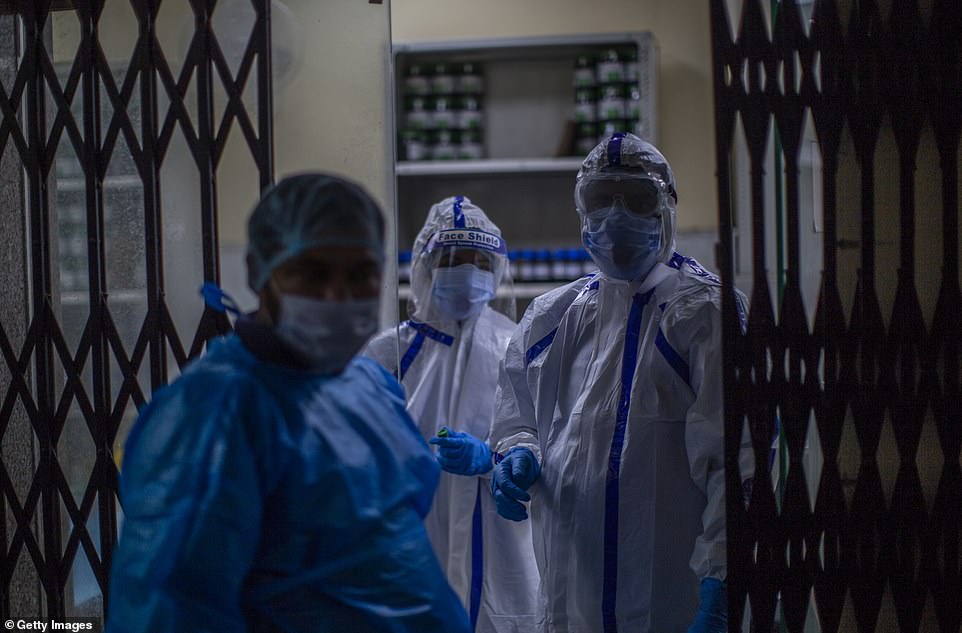 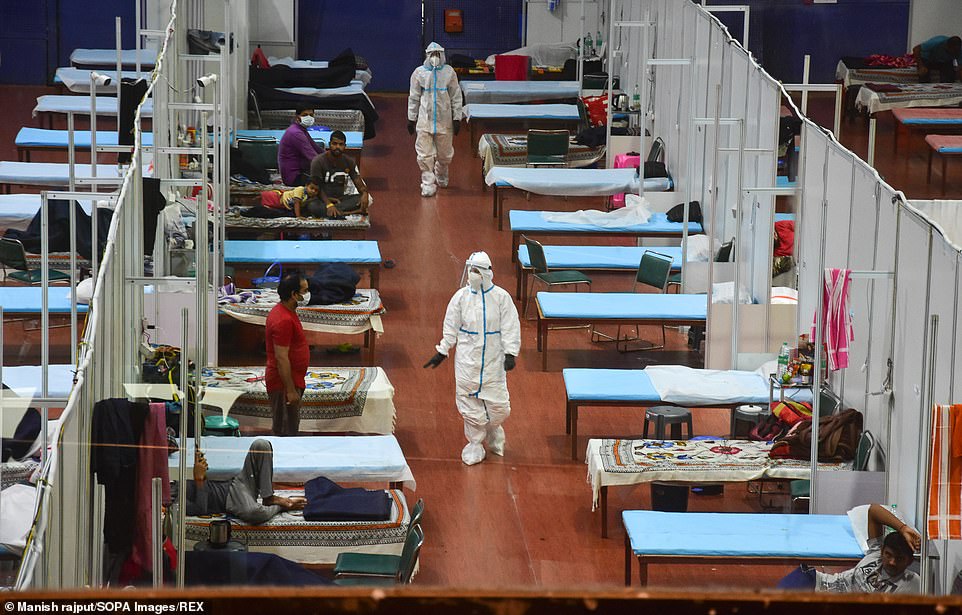 Another capital which has suffered worse than Delhi is Brasilia, where the country’s ‘federal district’ accounts for more than 87,000 cases by itself and has a smaller population than Delhi.

Washington DC has seen 11,529 cases in total, but this is a higher rate than Delhi’s official total because of the US capital’s far smaller population.

The US and Brazil are the only countries with a larger outbreak than India, which recently became the third nation in the world to reach a million cases.

India as a whole saw a record spike in cases today after 45,720 more cases were added to the tally, surpassing Monday’s previous high of 40,425.

Alongside Delhi, the states of Maharashtra and Tamil Nadu – the homes of Mumbai and Chennai respectively – are the worst-affected parts of India.

Prime Minister Narendra Modi’s government imposed one of the world’s strictest lockdowns in late March, but it has been steadily eased in recent months to lessen the devastating economic impact.

But states have been tightening restrictions independently of the federal government as case numbers have soared – including in Bangalore, Bihar, West Bengal and parts of Kerala and Tamil Nadu.

The Amarnath Yatra – an annual Hindu pilgrimage to a cave shrine in Kashmir that typically draws 300,000 participants – was cancelled for the first time in more than a century.

The pilgrimage, held for nearly two months, is usually guarded by some 40,000 government forces as well as health professionals.

But authorities said they were not able to divert such huge resources to the event with the health crisis still raging.

Officials in Kashmir said the Muslim-majority Himalayan valleywould go into lockdown until July 29, when the restrictions would be reviewed.

All government and private offices will be closed and there will be no public transport. Private vehicles will be allowed for essential needs only.

The small northeastern state of Sikkim, bordering Tibet, on Monday also ordered a lockdown until July 27.