Nearly a THIRD of independent abortion clinics closed in 5 years

In the past five years, nearly a third of all independent abortion clinics in the US have closed as laws to restrict access to the procedures have swept much of the nation, a new report reveals.

But without the national repute of Planned Parenthood or the funding capacity of major hospitals, these clinics are suffering the most amid a surge in anti-abortion sentiments in the US.

Some states have claimed that they’re concerned that independent clinics are not ‘safe’ because they’re not attached to hospitals with full surgical emergency capacity, abortion advocates argue they provide crucial access to safe procedures, especially in under-served areas.

Since 2014, 32 percent of independent abortion clinics in the US have closed, with the greatest density of closures in Texas, California, Florida and Michigan (green)

About one in four American women will have an abortion at some point in their lives – though rates are declining, hitting a record low since the Supreme Court’s Roe v Wade decision legalized the procedure in the 1970s.

Sexual health care monolith Planned Parenthood provides 37 percent of the more than 600,000 abortions performed each year, according to the new appointment.

Hospital physicians perform about three percent of the procedures, and doctors’ offices do just one percent.

The other 58 percent of abortions are performed at independent clinics scattered throughout the US.

‘Independent clinics serve some of the most politically hostile areas of the country, provide a breadth of reproductive health services, and work with their communities and local abortion funds to ensure that services are available to those patients with the fewest resources for accessing care,’ write the Abortion Care Network report authors.

For example, the only places women can get in-clinic, surgical abortions in Arkansas, Nevada, Oklahoma and Georgia – all places either embattled over or with laws restricting access to abortion – are independent clinics.

In seven states, independent clinics are the only abortion providers.

A single Planned Parenthood clinic provides abortions to each Missouri and South Dakota.

‘[Independent clinics] are bold advocates in their states, often fighting for and ensuring the legal right to access abortion,’ the report authors write.

States have passed or attempted to pass laws restricting abortions by a number of means, including requiring certain insurance provisions, waiting periods, disclosures (like mandating that doctors show women fetal ultrasound images), or bans on abortion after a certain point in pregnancy. 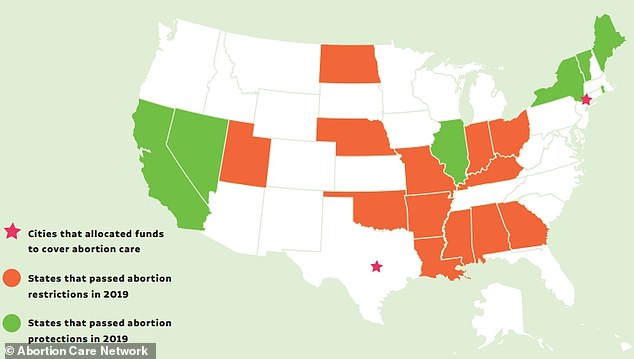 In 2019, 13 US states passed laws to make it harder for women to get abortions (orange),

Some states have passed so-called ‘heartbeat bills’ to ban abortion once a fetal heartbeat is detectable – as early as six weeks into pregnancy in some cases – but courts have thus far blocked all of these.

Independent clinics make up 69 percent of those that offer abortion services at or beyond 16 weeks of pregnancy, according to the new report.

Over the course of 2018 and 2019, 39 independent clinics – 85 percent of which provided abortions after the first trimester – closed in the US.

Fifteen were closed in each California and Texas. Another 11 clinics were shuttered in each Texas and Michigan, while Louisiana closed four and six shut down in Georgia, the new report found.

Since 2012, the total number of independent clinics in the US has fallen 32 percent.

‘Independent abortion care providers lack the institutional support, visibility, name recognition, or fundraising capacity of national health centers and hospitals, making it especially difficult for these community-based providers to garner the resources they need to provide care in their communities,’ the report authors wrote.