Last year, 32.7 percent said they vaped, which is more than double the 13.2 percent who reported vaping two years ago in 2017, the Centers for Disease Control and Prevention (CDC)  revealed on Friday.

Additionally, overall use was up with 36.5 percent of students reporting being current users of any tobacco product.

This is a 20 percent rise from 2017, which health experts say is a ‘dramatic increase’ and increasing teenagers’ risk of health problems in the future 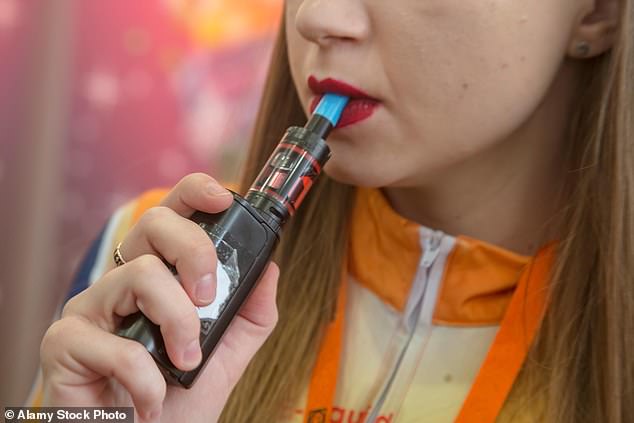 For the report, the team used data from the 2019 Youth Risk Behavior Survey looking at 12,000 students in grades nine through 12.

And while frequent use of vaping increased over the last two years, cigarettes and smokeless tobacco falling

In addition to e-cigarette use, there was an increase in frequent cigar use, but the rise was much smaller, going from about 15 percent in 2017 to 18.4 percent in 2020.

‘These data show that e-cigarette companies, many of which are owned by major tobacco companies, have successfully used ‘Big Tobacco’s’ playbook to hook another generation of America’s kids,’ said Harold Wimmer, president and CEO of the American Lung Association, in a statement.

‘Flavors are known to lure and hook kids to a lifetime of tobacco addiction, and we see this reflected in the continued spike of the amount of youth vaping.’

Health experts have criticized the vaping industry – and particularly brands such as JUUL – for marketing flavors such as mango and mint to teens, increasing the odds they’ll wind up addicted to nicotine.

The rise in e-cigarette use comes even as more than 2,500 young Americans were diagnosed with  EVALI (e-cigarette or vaping product use-associated lung illness) linked to vaping. 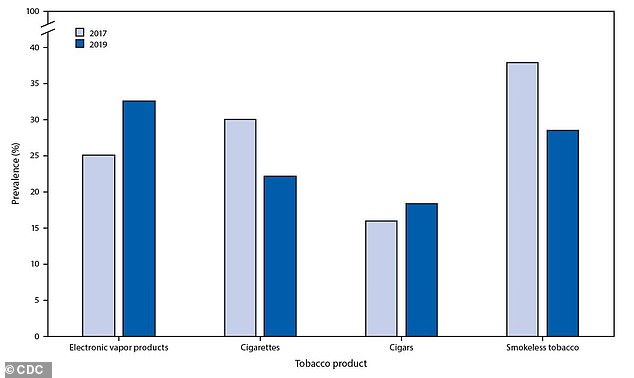 All other tobacco products were much lower with cigarette smoking at 6%, cigar smoking was 5% and smokeless tobacco use was 3.8%

Researchers found people between ages 13 and 24 who vaped were five times more likely to test positive for COVID-19 than those who use no nicotine products.

The CDC believes traditional tobacco use among high school students has dropped as they’ve increasingly been using e-cigarettes.

‘Although current use of cigarettes, cigars, and smokeless tobacco among US high school students has decreased, tobacco product usage has evolved, and the increasing prevalence of electronic vapor product use among youths during recent years is concerning,’ the authors wrote.

‘Implementing evidence-based tobacco control strategies, combined with FDA’s regulatory efforts, is important for preventing and reducing all forms of tobacco product use among youths.’

The survey also found that other risky behaviors continue to remain common among US teens.

One-fifth of teens who were sexually said they only use the withdrawal method – which is withdrawing the penis before ejaculation – or no contraception at all.