Two 14-year-old boys have been jailed for murdering a teenager after a ‘simmering dispute’ between them.

The youngsters and a third boy aged 15, who cannot be named for legal reasons, were involved in a fight with Saif Abdul Majid, who was 18, in Neasden Lane, Neasden, north-west London, on October 5.

That incident left him with a facial injury, Metropolitan Police said.

Two 14-year-old boys have been jailed for murdering Saif Abdul Majid (pictured), 18, after a ‘simmering dispute’ between them. He was stabbed several times and suffered a fatal neck injury at Clifford Court, Neasden, north-west London, the Old Bailey heard

The following day, Saif went back to the scene of the fight at around 3.40pm – and  the three boys were also there.

Police said there was a brief discussion before all four teenagers walked to Clifford Court where Saif was ‘set upon’.

He was stabbed several times and suffered a fatal neck injury, the Old Bailey heard.

The 14-year-olds fled, ‘leaving Saif dying on the pavement’ as police and paramedics were called to the scene.

A post-mortem examination gave the cause of death as a stab injury to the neck, while Saif had also suffered a fractured nose ‘most likely caused from the assault the previous day to the murder’.

Three suspects, who were identified from witness accounts and CCTV, were subsequently arrested and charged with murder. 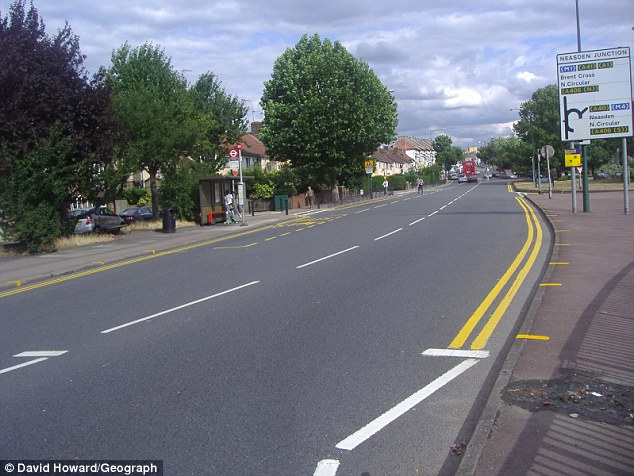 Saif was stabbed several times and suffered a fatal neck injury on October 5. The day before, he’d had a fight in Neasden Lane (file picture) with the two boys and a third, aged 15, who cannot be named for legal reasons

A five-week trial took place at the Old Bailey and the two 14-year-olds were found guilty of murder on Friday, March 14.

Jurors failed to return a verdict on the 15-year-old defendant.

The two young killers were sentenced on Wednesday – one of them to 14 years’ imprisonment and the other to 14-and-a-half.

Following the sentencing, Detective Inspector Justin Howick said: ‘The level of violence directed at Saif on that fateful day was shocking.

‘This is another sorry example of the tragic outcomes that can occur when individuals arm themselves on the streets.

‘Two young men will now spend a significant amount of time behind bars as a result of their actions, while Saif’s family will be left to mourn his needless death.’