Neighbour, 40, bludgeoned ex-councillor next door to death with a spade

A businesswoman bludgeoned her next-door neighbour her to death with a garden spade after blaming the former councillor’s untidy home for her inability to sell her own house, a court heard today.

Debby Foxwell, 40, from Welwyn Garden City, allegedly launched the ‘sustained and merciless’ attack on obsessive hoarder Louise Lotz after developing a ‘visceral hatred’ for her following years of feuding over ‘boundaries, bins and borders’.

A confrontation is said to have begun when Miss Lotz used a bin to block a gap in a shared fence her neighbour was fixing, prompting Foxwell to grab a spade and smash her way into the 64-year-old’s house before using the tool ‘like a machete’, the jury heard.

Foxwell, who allegedly told her partner after the attack, ”It’s over, I’ve done it’, has denied murder but pleaded guilty to manslaughter on grounds of diminished responsibility.

Opening the case at St Albans Crown Court, prosecutor Alan Blake said: ‘After a day of tension and disputes over the fence, this defendant went to her shed in her back garden and picked up a spade.

‘She walked through her house, number ten, and kicked open the door of number eight in a furious rage.

‘She used a spade to smash electrical items in the lounge before pursuing her neighbour, who made a run for safety.

‘Louise Lotz got to the front door of number six. Debby Foxwell caught her and repeatedly bludgeoned her with a spade, causing catastrophic injuries to her head.’

Ms Lotz had lived at number eight for several years with her lodger, Liam Graham, the court heard.

‘She was something of an untidy hoarder. The rear garden was overgrown and unloved. The interior was cluttered,’ Mr Blake said.

Mr Graham agreed, telling the jury: ‘The house was a shambles. Louise was a bit of a hoarder. The house was a mess. The rear garden was hardly tended to.’

Foxwell moved into number 10 a decade ago and initially relations were cordial, the prosecutor said, before disagreements began over issues like ‘boundaries, bins and borders’.

By 2015, fights between the pair were regularly reported to the police and in 2016 Foxwell was prosecuted for assault and criminal damage.

This afternoon, Mr Vroon told the jury he believed she was still grieving for the loss of her husband Paul, who had died of cancer at the age of 33. 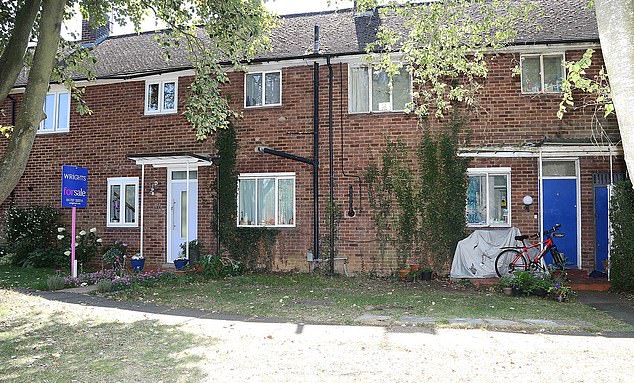 On the left is Miss Lotz’s house while Foxwell’s is on the right. They are on a tree-lined street in Welwyn Garden City

The court heard she had been in a relationship with Mr Foxwell for eight and a half years before he was diagnosed with an inoperable and aggressive form of cancer.

They married in a chapel at the hospital three weeks before he died in June 2016.

Questioned by Peter Doyle QC, for Foxwell, Mr Vroon, 36, agreed her grief for Paul was still very real and she was on anti-depressants.

The Dutchman said he met Foxwell in October 2017. He was working as an IT manager in Peterborough and she had taken a career break from her work in cancer research.

He said they moved in together, but were looking to move to a bigger house in Peterborough.

‘The property had been on the market for probably longer than half a year – we were struggling to sell it,’ he said. ‘We both blamed the state of the property of at number 8.’

Asked by prosecutor Alan Blake if he had much to do with Miss Lotz, he replied: ‘Not particularly. She liked to stare at me and watch me park the car. I found it unsettling and annoying.’

He said there had been tensions between Foxwell and her neighbour for at least six years.

On the afternoon of the killing they were removing the garden fence panels to paint them, Mr Vroon told the jury.

He said a police officer had been called out by his neighbour, but they explained the panels were on their side of the property and he left them to it.

Later that evening he heard a banging noise and Miss Lotz pushed out one of the fence panels.

He said he put its back, but later there was an ‘almighty bang’ and another panel had been pushed out again with much more force. 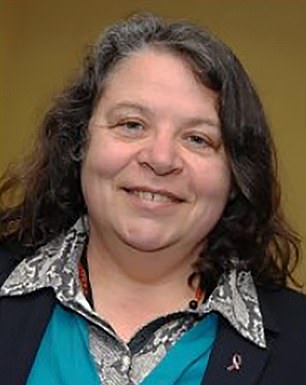 He said Foxwell recorded what happened on her phone and that is when he believed Miss Lotz snatched her phone.

Mr Vroon went on: ‘Debby was incredibly angry and hurling pottery that was in overgrown garden at the glass. I remember the lodger leaning out of the window and telling her to stop.

‘I had chased after Debbie in an attempt to get her to return to our garden.

‘I tried to persuade her and she did come back to our house. She was still absolutely l livid. She used our home landline to call 999. She found the conversation with dispatcher frustrating and smashed the phone on the ground.’

He said he tried to restrain Foxwell as she went to the shed and then became ‘fixated’ on the landline – which was the police operator ringing back.

On the evening of the killing, Miss Lotz’s lodger Mr Graham said he saw Foxwell pick up clay pots and throw them at the window and then swing the lawn mower at the door. Then he heard a noise and saw her in the lounge.

He said: ‘Debby had a spade in her hand. She said ‘Where is she?’ I said ‘Who?’ She said ‘You know who.’ I said: ‘I don’t know where she is. ‘She was swinging the spade from side to side.

She put the spade through a great big plasma TV and smashed a laptop into a million pieces. Mr Graham said Foxwell then said: ‘There is the b****’ as Louise ran out of the house. ‘Nobody else compelled her to behave in the manner she did.’

Mr Vroon said he did not stop his partner as she left through the front door. He said: ‘It was stupid. I probably could have stopped her.’

He went on: ‘She walked in the front door a couple of minutes later and closed the door behind her. She had the spade with her when she left she came back she hadn’t.

Asked to describe her mood at times, he said: ‘She had a white, hot anger.’