‘Neighbour from hell’ dumps SHIPPING CONTAINER in her front garden

A ‘neighbour from hell’ has left residents fuming after dumping a giant shipping container in her front garden as a makeshift home extension.

The large grey steel container appeared in the front garden of Lillie Goddard’s Swindon home in December much to the horror of nearby householders.

The mother-of-two, 44, claims she installed the container to store her possessions after moving out of her home in late 2019 as the property had been declared unsafe for a young child to live in.

Ms Goddard, who now resides in a three-bed static caravan next to the property, now rents her £170,000 detached home out – which she claims is so she can pay for the cost of the caravan and container.

But nearby residents claim she is converting the container for habitation after renting her home out and say that with her two caravans it makes their street look like ‘a travellers site.’

Neighbours claim Ms Goddard has refused to budge over the issues and has even been ‘confrontational’ – leaving them no choice but to contact the authorities.

The local council has agreed to investigate and said that early inquiries found that ‘planning breaches may have occurred’.

Residents at Purley Avenue, Swindon, said they have been complaining since the caravan appeared in July.

The container then arrived just before Christmas. A wooden box like structure has been placed on top of the container and is draped in tarpaulin.

Jo Wilson, who lives opposite the property, said: ‘People have complained about this for months but nothing’s been done.

‘We feel like the area has been neglected and our concerns always fall on deaf ears.

‘As far as we know, they did not apply for planning permission and have been very confrontational when we talk to them about tidying up the mess or moving the caravans.

‘Then, as if that wasn’t bad enough, they moved that container next to the house. It’s ridiculous.’ 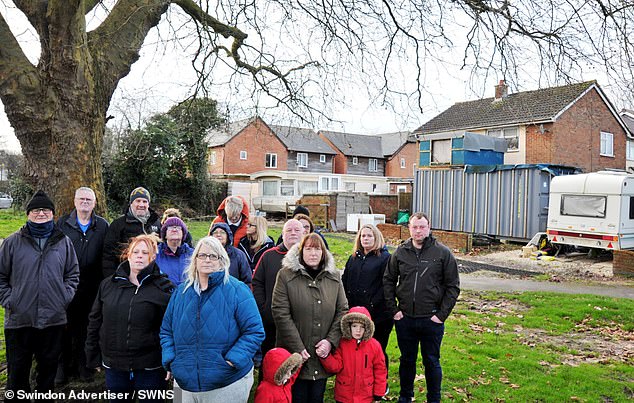 Tracy Bernasconi said: ‘It looks disgusting – like a travellers’ camp.

‘It’s not normal or right. I’ve lived here all my life, 55 years and I’ve never seen anything like it before. There’s a disgraceful mess piling up.’

Sue Broadbank: ‘All I can see from my back windows is the caravan and the monstrosity next to it.

‘The fumes from their log burner cause a stink and they cut down the trees between our boundaries just so that they could fit the caravans onto the lawn.

‘Their house is in a bad state and the whole place is a mess.’

At their wits’ end and feeling helpless after months of seeing the situation worsen, residents finally got local MP Robert Buckland involved.

A spokeswoman for Mr Buckland said: ‘Robert has raised this issue on behalf of his constituent, Jo Wilson, after she contacted him, and we are awaiting an update from the planning enforcement lead at Swindon Borough Council.’

A Swindon Borough Council spokesman said: ‘Our initial investigations suggest that planning breaches may have occurred, though further work will have to be carried out to allow us to determine the extent.

‘We are currently in the process of considering our options and will take appropriate action at the earliest opportunity.’ 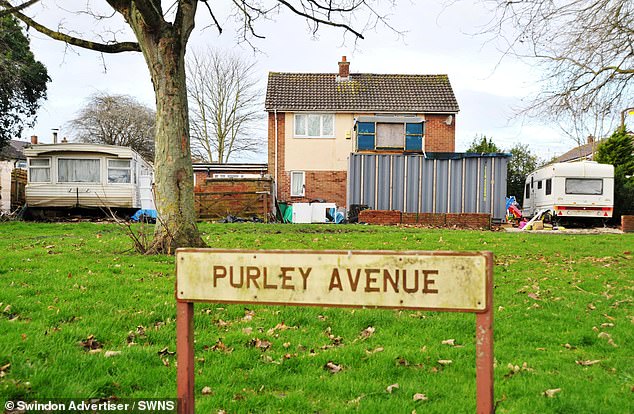 Hitting back, Ms Goddard labelled her neighbours abusive and racist.

She told the Swindon Advertiser: ‘I have told the neighbours my story but they do not listen, they get very abusive. They request that I just wave a magic wand and make money to resolve the situation quicker then my ability.

‘This is a racist area where people have no empathy for a single mum in need and in poverty.

‘Things have just escalated. It’s been one thing after another. They have yelled at me because of the caravan, they are causing me extra stress and harassment on top of everything else.’

The issue has also caused a stir online.

One person said: ‘What a blasted mess, what is wrong with the toothless council?’

Another added: ‘That looks grim.’

But a third posted: ‘Although unsightly, the caravans are vehicles with wheels and, the shipping container is a temporary structure.

‘Technically, it’s no different to someone painting their house purple and the nighbours not liking it – you’re fully entitled to do it to your own home.

‘They’re no more of an eyesore than the ghastly flats opposite.

‘In defence of the owner, the shipping container has timber stud cladded to it, which signifies the owner is intending to board and render it, to make it look like a garage.’