A neighbour of a woman in the UAE ‘who killed and cooked her lover’ heard a chopping machine and could ‘smell meet grilling’ at her house, it has emerged.

The unnamed Moroccan woman carried out the killing at her home in Al Ain after her boyfriend of seven years said he was planning to marry someone else in their homeland, prosecutors say.

Officers said she cut up his body and used a blender to mince her former partner’s remains before cooking and serving them to Pakistani workers near her home as machboos – a traditional Gulf dish of rice and meat similar to biryani.

Her lawyer has denied the claims, but police say they found two fingers and a tooth which the woman had dropped while trying to dispose of the remains.

A female neighbours has told local media how she heard the sound of the chopping machine and could smell meat being grilled in the oven.

A Moroccan woman has been accused of butchering her lover, cooking his remains and serving them to workers as machboos (file picture) – a traditional rice dish – in the United Arab Emirates

She said: ‘Four days after the woman moved to the house, I heard the sound of a chopping machine at 3am.

‘Then, there was a strange stinking smell mixed with that of the grill. What surprised me was the continued sound and the long-lasting smell which continued for a few days.

‘I even had to stop going to the yard because of that smell. We came to know what happened only after the police brought in police dogs and discovered the crime. Then I informed the police about the mincing sound and the smell.’

Earlier this week, it was reported that police were called after the man was reported missing by his brother.

He went to the couple’s home in the hope of finding him, but she claimed to have kicked the victim out and said she did not know where he was. 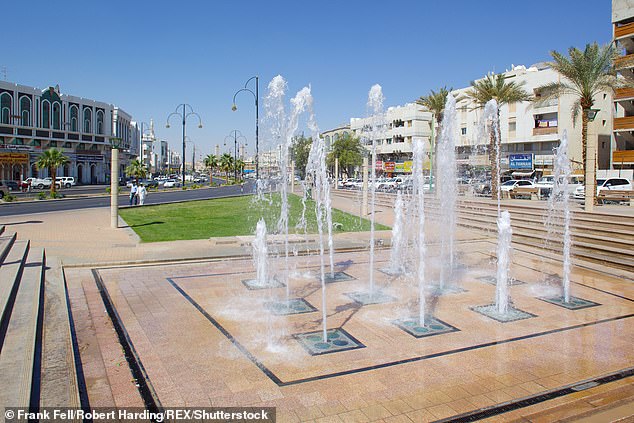 The unnamed woman carried out the killing at her home in Al Ain (file picture) after her boyfriend of seven years said he was planning to marry someone else in Morocco, prosecutors say

Reports in Morocco then quoted the brother as saying that police found a human tooth inside the woman’s blender.

According to The National, DNA tests confirmed the tooth belonged to the man and his girlfriend was arrested.

She was arrested and is said to have told police she carried out the killing in a moment of ‘insanity’. The woman said it was out of revenge, having financially provided for him for years.

She said she had asked a friend to help dispose of the body – but the friend denied witnessing the crime when questioned by police, The National reports.

According to the Khaleej Times, the woman’s lawyer said his client ‘might have mental problems’.

Khalid bin Jumhour Al Ahbabi also denied that the Moroccan cooked the body and served it to workers.

Police say the woman invited her victim for dinner before stabbing him twice in the chest and abdomen, cutting him up and putting his body into two bags.

She then sold her jewellery to buy knives, a saw, a meat grinder and a gas stove before slicing the body and putting it in the oven, police say.

The next court hearing takes place on December 31 in a case that will see 24 witnesses giving evidence.