A neighbourhood dispute has broken out over an elderly man using a scooter horn to scare a flock of pigeons.

A 47-year-old man has been charged with trespassing, criminal damage and unlawful wounding with circumstance of aggravation after an incident in Orelia, Perth on Friday morning.

The man allegedly broke into grandfather Joseph Manuel ‘Peppe’ Pavon’s home on Menli Place to settle a dispute over the 88-year-old using the horn on his scooter to scare away pigeons in the street.

‘When I come in there’s a lot of pigeons on the road and I play the horn on the scooter and the pigeons all blow away,’ Peppe told 9 News.

Peppe claimed the man broke into his house just after seven in the morning and kicked his scooter into his car.

‘I closed the door, I came here to the patio, he kicked the door and opened the security door and came behind me.’

Peppe armed himself with a rusty shovel to defend himself, before the man pushed him, causing Peppe to fall onto his side.

He suffered severe bruising and cuts to his right arm and was taken to Fiona Stanley Hospital and given stitches.

Peppe claimed that falling onto his side saved his life.

‘If I was going back for sure it would have killed me,’ he said.

The accused neighbour will face Rockingham Magistrates Court on January 31. 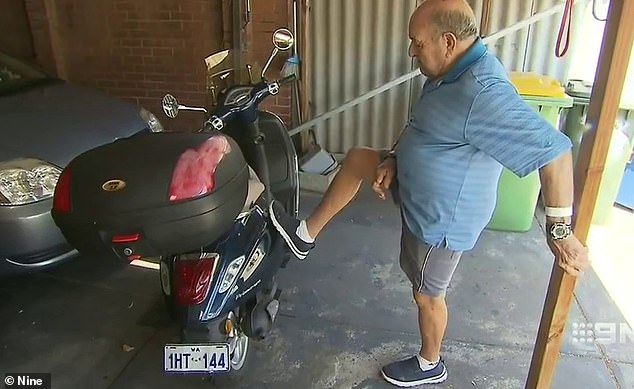