Jake Michael Wear, 28, and his mother Katrina Jean Wear, 54, appeared at Rockingham Magistrate’s Court over the altercation at his grandfather’s birthday celebration at a Perth home last September.

The court heard an altercation broke out after Sprocket escaped from her home and entered Ms Wear’s yard during the family gathering before helping herself to the birthday cake, The West Australian reported.

Sprocket the dog (pictured) was at the centre of an ongoing neighbourhood dispute, which spiralled out of control at an 80th birthday party last year

An argument between Ms Wear and her female neighbour, who came to retrieve her dog, then turned physical, and they started pulling each other’s hair and trading punches.

Several guests at the celebration joined the melee including Ms Wear’s son, who kneed the victim twice to the stomach as he tried to free his mother.

The victim claimed she suffered a broken nose, which needed hospital treatment.

The court also heard Ms Wear damaged on the victim’s glasses by stomping on them.

The family’s lawyer Michael Tudori told the court Ms Wear was an embroiled in an ongoing dispute with her neighbour over Sprocket repeatedly escaping from her yard.

Both mother and son expressed remorse for their actions as they pleaded guilty to assault. 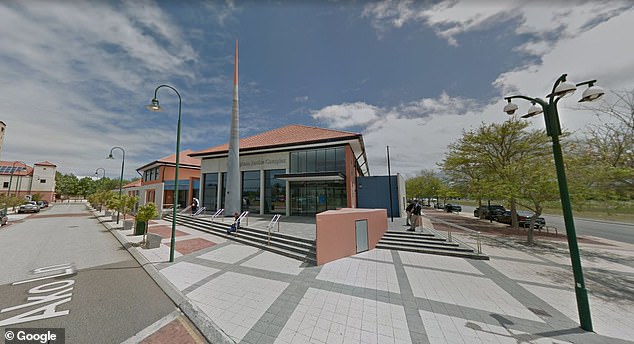 The incident ended up in Rockingham Magistrate’s Court (pictured) this week, where a mother and son were fined $1650

The neighbour, 30, recalled her version of the ‘traumatic’ incident, where she denied Sprocket helped herself to the sweet treat.

‘Our dog hasn’t got an appetite for birthday cake,’ the woman told the court.

‘I’ve never been in a fight myself, and to be set upon like that … it was all so surreal.’

Magistrate Leanne Atkins described Ms Wear’s behaviour as ‘totally unacceptable’.  as she fined the woman and her son $1,650 each.