EastEnders’ £87million set is making our homes crack: Neighbours’ fury as they claim ‘diabolical’ building works for TV show is damaging their houses – and it is set to go on for five years

By Tom Witherow and Henry Goodwin For The Daily Mail

Residents living next to the new EastEnders set vented their fury yesterday after learning they will have to endure five more years of construction chaos.

Neighbours described how the ‘diabolical’ building work has shaken their houses, damaging walls and ceilings.

The builders use heavy machinery including diggers, cranes and drills between 8am and 6pm on weekdays, as well as on Saturday mornings, residents said.

Aerial photo of the Albert Square set will have a new ‘front lot’ – a brickwork replica of the current set – and a ‘back lot’ which will provide extra locations to ‘better reflect modern East End London’. Marked boxes show the old EastEnders set, left, and the new set, right 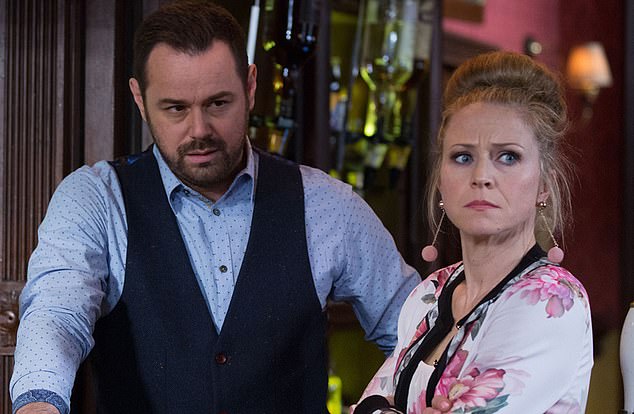 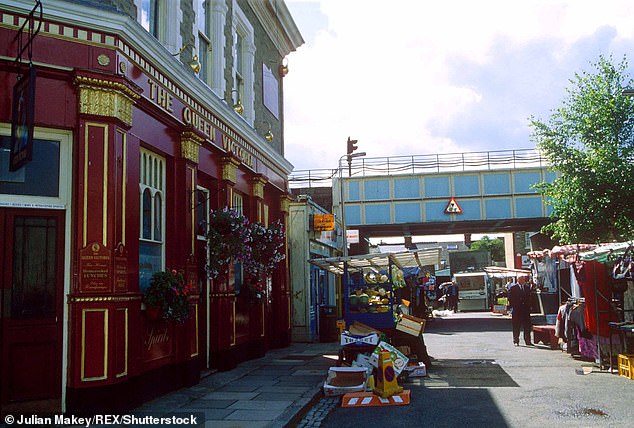 The new set for the soap opera is being constructed at Elstree Studios in Hertfordshire, where the original is located, but most locals were unaware of the delays until they read Thursday’s newspapers

Work on the project, which was unveiled in 2015, was meant to be completed by August this year but it has been heavily delayed and will cost licence fee payers £27million more than originally budgeted.

The new set for the soap opera is being constructed at Elstree Studios in Hertfordshire, where the original is located, but most locals were unaware of the delays until they read Thursday’s newspapers.

The set, which will allow EastEnders to be produced in high definition TV, was originally scheduled to cost £59.7million. But a National Audit Office report revealed the BBC’s poor planning and lack of expertise means it will actually cost £86.7million – 45 per cent more – and will not be finished until May 2023.

The BBC admitted yesterday some of the delays were the result of contractors finding asbestos and a large concrete oil tank under the site. 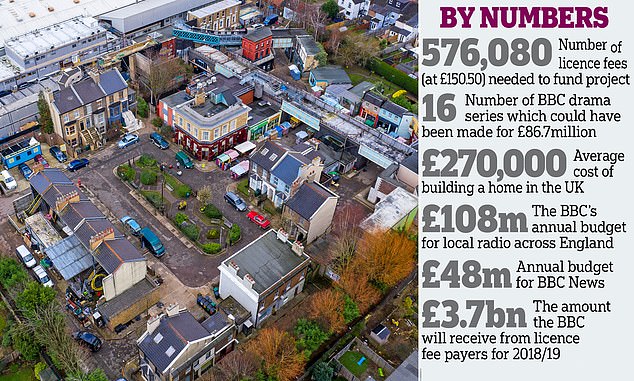 The current EastEnders set was built in 1984 and was intended to last two years. Its construction makes it unsuitable for HD filming

An industry insider said: ‘They misjudged everything. It was a complete shambles so they went back to the drawing board.’ The BBC reported internally in October last year that it could not complete the work as planned but many residents did not know about the delays until this week.

Hugo Duckworth, 62, who has lived in the area for 30 years, said: ‘It’s diabolical. The noise is thumping away and it’s cracked my ceilings. It’s like they’re saying: “We’re the BBC and we don’t give a s***.”

Another neighbour said: ‘It’s been hell – the bedroom was shaking, books were falling off shelves. I couldn’t sleep, couldn’t work, I was driven out of my home during the day. I had to move and I now live in a quiet development nearby.’

A homeowner whose house overlooks the new set said: ‘The whole house shakes and you can’t open the windows. There are big cracks and I only had them done last year. It cost me thousands.’

Retired film publicist Brian Burton, 70, a member of the local residents’ association, said: ‘There have been times when the constant noise has been a bit of an upheaval but I’ve coped with it. I don’t think my problems are as great as the houses nearer the site.’

The current EastEnders set was built in 1984 and was intended to last two years. Its construction makes it unsuitable for HD filming.

The BBC said: ‘We are extremely mindful of the neighbouring properties and have ensured residents are regularly updated.

‘We keep all out-of-hours work to an absolute minimum.’

A spokesman added there had been building on only one Saturday since the latest stage of the project began in September.