Neighbours will air the first gay wedding on Australian television in the coming months, after the government legalised same-sex marriage last December.

On Tuesday, filming of the historic moment commenced in Melbourne, with actors Matt Wilson and Takaya Honda looking sharp as grooms.

According to The Daily Telegraph, Magda will play celebrant Jemima Davies-Smythe during the wedding of characters Aaron Brennan (Matt) and David Tanaka (Takaya).

Magda is seen wearing a colourful top, spectacles with a royal blue neck strap and a orange headpiece.

The wedding is due to become the first gay wedding on an Australian television show after same-sex was legalised after the postal plebiscite, following a smaller scale commitment ceremony on Nine drama House Husbands. Celebrate! According to The Daily Telegraph , Magda will play celebrant Jemima Davies-Smythe as actors Matt and Takaya’s characters Aaron Brennan and David Tanaka tie the knot in an outdoor wedding

Matt Wilson spoke to Confidential last year about the major moment – which he claimed didn’t originally intend to line up with Australia’s marriage law decision.

‘The writing department actually fluked this,’ the 29-year-old said.

Matt explained that the proposal itself had been shot months prior to the postal plebiscite, and the idea for the episode was dreamt up over half a year before, so it was pure coincidence that it will be happening at such an appropriate time. 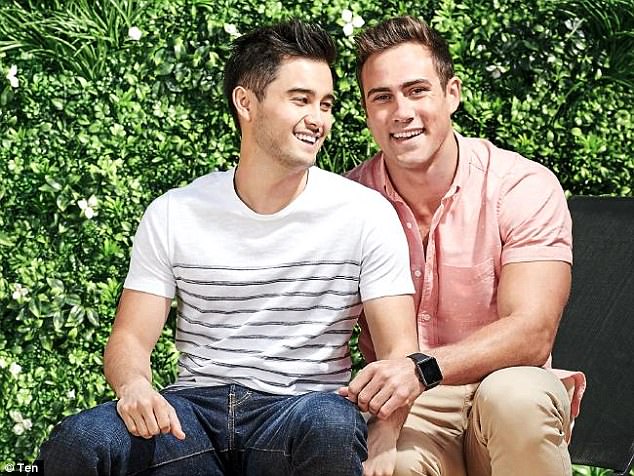 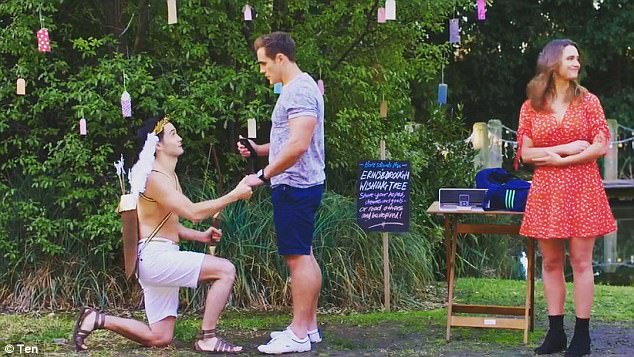 The one! The proposal itself had been filmed months before the postal plebiscite and the idea for the episode dreamt up over half a year before that

‘A lot of the times we try to attack issues on the show and sometimes they have been and gone in the media or they don’t get as much light as they can but this should absolutely bring the issue to the surface,’ Matt said.

Both actors have girlfriends outside the show, with Takaya’s partner Amy moving from Sydney to Melbourne to be with him and Matt frequently posting about his stunning leading lady Jessica on social media.

But despite their real lives and on screen lives being different, Matt commented that he is still astounded by the effect his character has.

‘I’ve had people come out to their friends because of Aaron and the storylines the guys have written and then send me messages thanking me,’ he said. 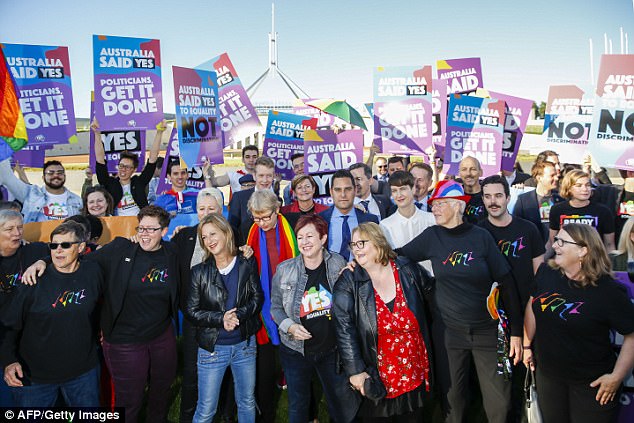