A letter Neil Armstrong sent to his father about how he almost died in the Korea War is set to fetch $20,000 at auction tomorrow.

The first man on the moon was piloting a US Air Force F9F Panther plane on a reconnaissance mission in September 1951 when it was hit by anti-aircraft fire.

While trying to regain control, he collided with a pole which sliced off 3ft of the Panther’s right wing.

Armstrong, 21, ejected over water and wanted to await rescue by Navy helicopters but his parachute blew him back over land and he was eventually rescued in a Jeep.

He sent a hand-written letter telling his father about the close shave – and asking him to not tell his mother because she would worry. 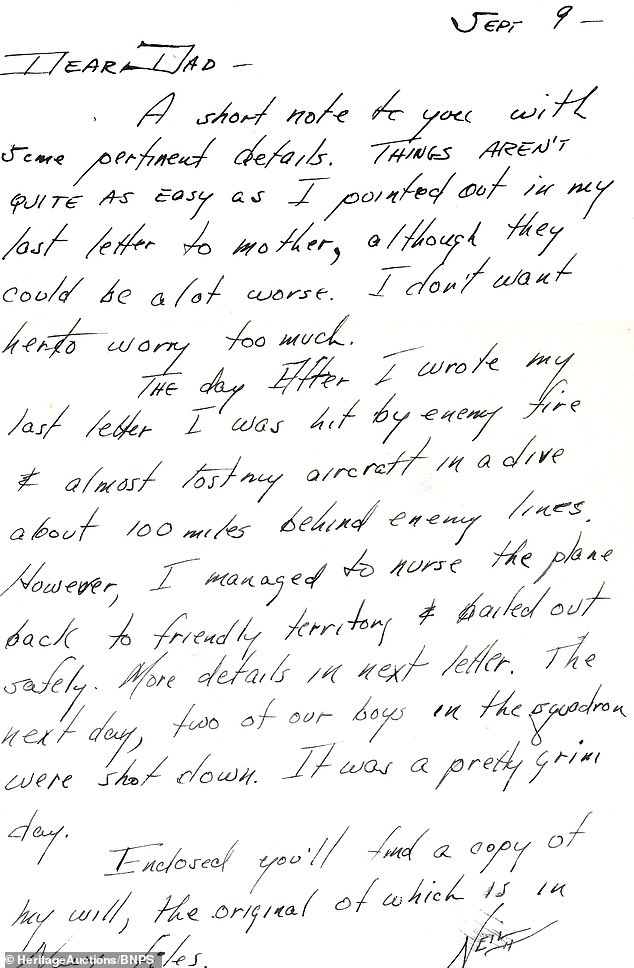 Armstrong sent a hand-written letter (pictured) telling his father about the close shave which has been unearthed by his children 67 years later. 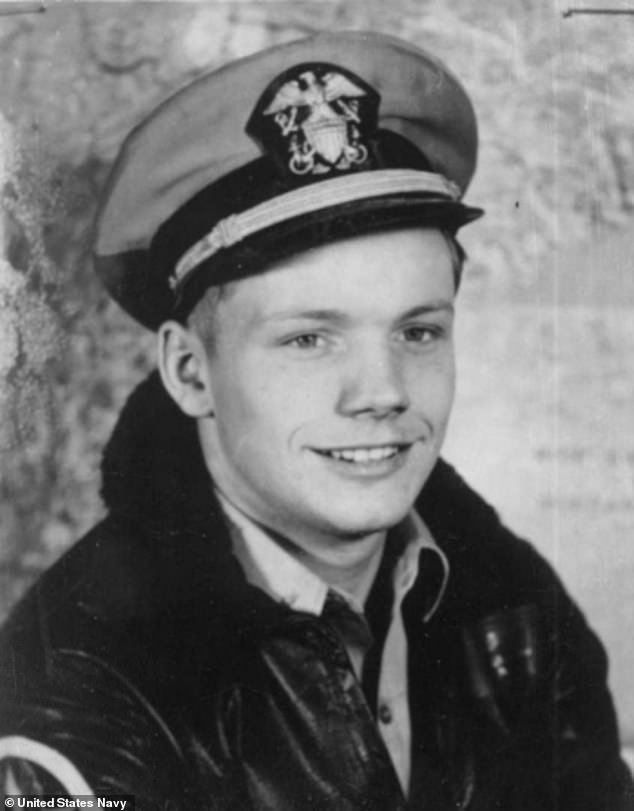 The letter, uncovered by the astronaut’s children 67 years later, is now being sold the Armstrong family. Part of the proceeds will go to charity.

In his letter to his father, Stephen, Armstrong wrote: ‘The day after I wrote my last letter I was hit by enemy fire and almost lost my aircraft in a dive about 100 miles behind enemy lines.

‘I managed to nurse the plane back to friendly territory & bailed out safely.

‘The next day, two of our boys in the squadron were shot down. It was pretty grim.’

Armstrong also enclosed a copy of his last will and testament, adding that the original was in the Navy files.

Also on sale is one of the pioneering astronaut’s spacesuits and a US flag he took into space. 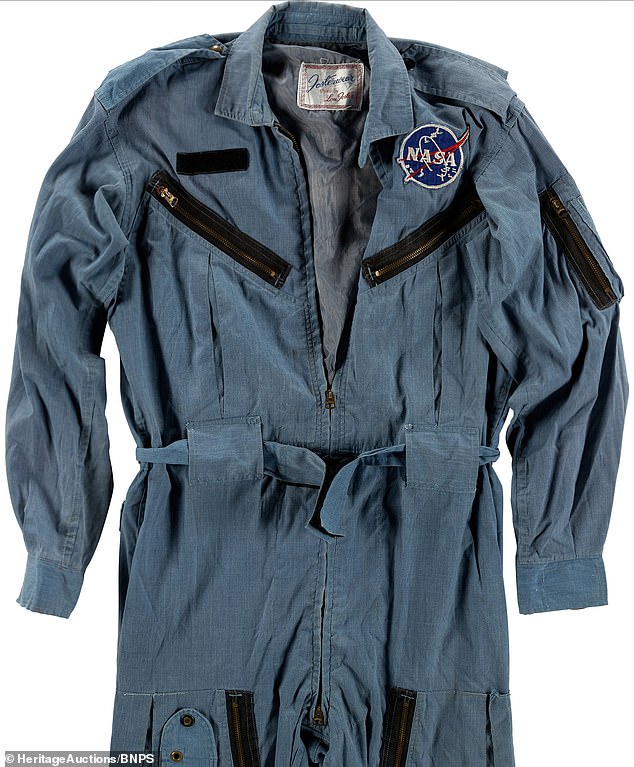 An early spacesuit warn by Armstrong around the time of project Mercury. It could sell for $13,000 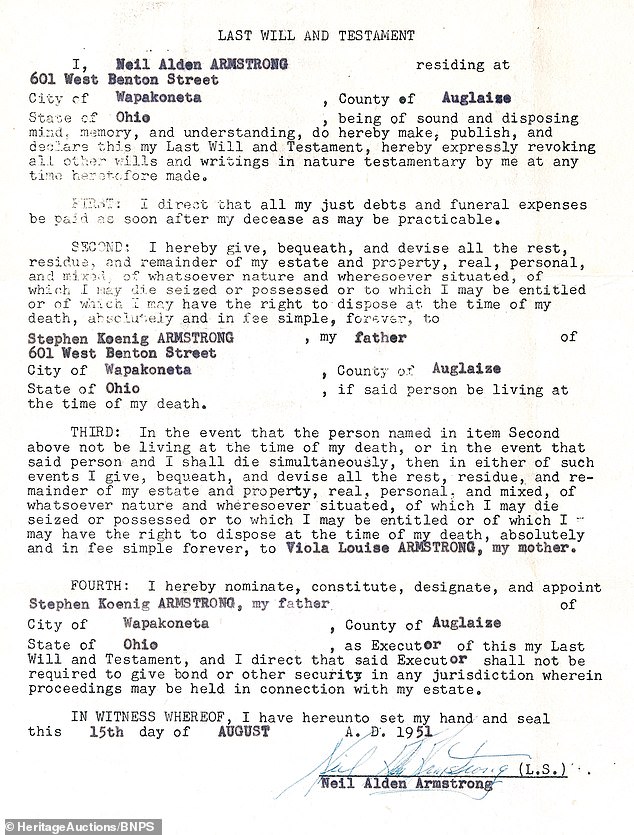 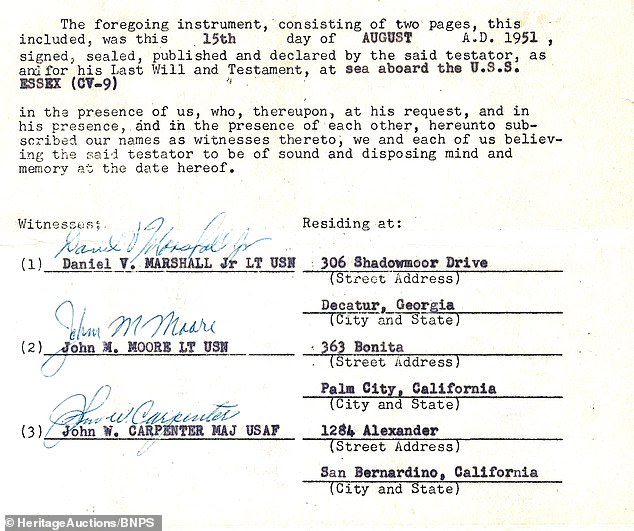 Michael Riley, a space memorabilia expert with the auction house Heritage, said: ‘I didn’t know about the existence of this letter and outside of the family, neither did anyone else.

‘I’d expect it to have a huge market, not just to fans of Armstrong the astronaut but also to military enthusiasts and museums.

‘The letter is fantastic because it offers a personal take on one of the scariest and most dramatic incidents of his life.

‘What’s nice about it is how he didn’t want to upset his mother and only spoke about what happened in a letter to his father.’

He added: ‘The letter itself is in fantastic condition and has been well looked after throughout its life. 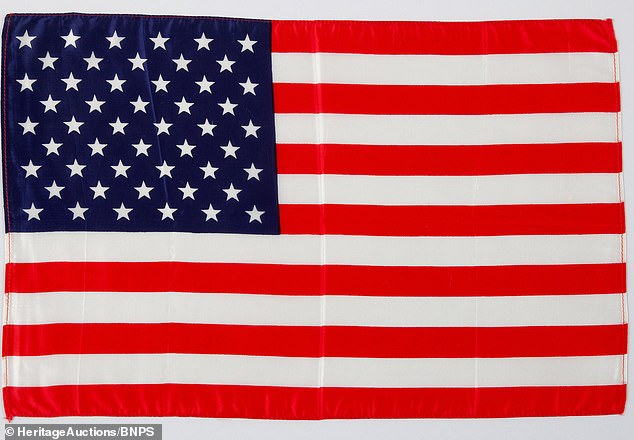 An American flag which Neil Armstong kept from Apollo 11 as a souvenir. It could fetch $75,000

‘It has been folded into three parts at some point and one side has been more exposed to the light, but other than that it’s absolutely fantastic.

‘It will come with a certificate of authenticity from the current owner and I’d be very surprised if it didn’t sell for a huge amount.’ 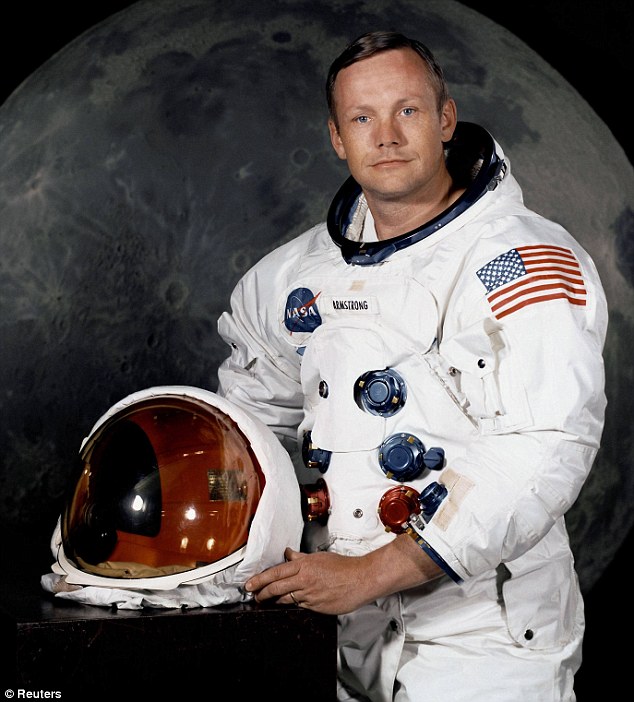