Professor Neil Ferguson today admitted breaching the Covid-19 lockdown for secret trysts with his married lover was the ‘wrong thing to do’.

The shamed scientist, nicknamed ‘Professor Lockdown’ because his grim modelling convinced ministers to shut the UK down, said: ‘I should have followed the rules and I regret that.’

Professor Ferguson, an epidemiologist at Imperial College London, sensationally quit his role on the influential government advisory SAGE committee in the wake of his actions.

As well as discussing his breach of the rules, he told BBC Radio 4 today that the next stage of the UK’s coronavirus outbreak may resemble a game of ‘whack-a-mole.

He revealed he does not think another nationwide lockdown mirroring the one imposed on March 23 would be necessary – but said there are likely to be targeted local shutdowns. 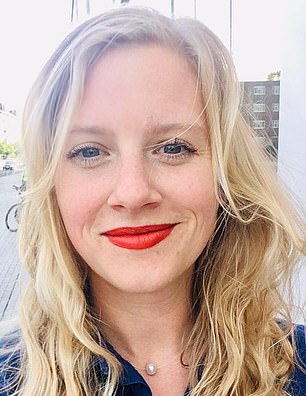 Professor Neil Ferguson (left), 51, asked his mistress Antonia Staats (right), 38, to travel across London to his home at least twice during the peak of the outbreak, it was revealed at the beginning of May

Professor Ferguson, 51, asked his mistress Antonia Staats, 38, to travel across London to his home at least twice during the peak of the outbreak, it was revealed at the beginning of May.

Critics argued his actions ‘undermined the government’s lockdown message’. He admitted he made an ‘error of judgement’ in his resignation letter from SAGE.

And he claimed he thought he was ‘immune’ to the illness – despite leading scientists warning there was still not enough evidence that Covid-19 survivors are protected from reinfection.

Discussing his actions that led to him quitting SAGE on BBC 4’s Political Thinking podcast, he said: ‘It was the wrong thing to do. I should have followed the rules and I regret that.’ 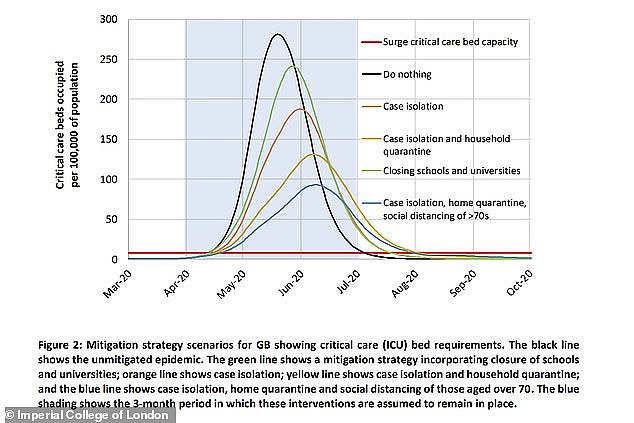 The director of the MRC Centre for Global Infectious Disease Analysis at Imperial authored the report containing the apocalyptic prediction that coronavirus could kill 500,000 Britons without action. Pictured, one of his graphs showing how hospitals could be swamped if no action was taken

BRITAIN’S COVID-19 DEATH TOLL COULD HAVE BEEN HALVED IF LOCKDOWN WAS INTRODUCED A WEEK EARLIER, SAYS PROF LOCKDOWN

Britain’s coronavirus death toll could have been halved if stay at home measures were introduced a week earlier, ‘Professor Lockdown’ Neil Ferguson claimed a fortnight ago.

Boris Johnson imposed the lockdown on March 23 on the back of the Imperial College London scientist’s grim modelling, which predicted 500,000 people could die if the virus was left unchecked.

Professor Ferguson said that, based on what was known about transmission and fatalities at the time, the draconian measures were implemented at the correct time.

But he conceded that, in hindsight, around tens of thousands of lives could have been saved if the lockdown had come a week earlier.

Britain has officially suffered 43,000 fatalities where Covid-19 was the definite cause of death – the most in Europe. But the true death toll is thought to be above 50,000 according to estimates which factor in suspected cases who did not receive a test.

Professor Ferguson, who regularly appeared on TV to urge the public to stick to lockdown rules, added: ‘I’m glad it’s behind me now and I understand how people feel disappointed.’

He claimed a lot of scientists ‘have been subject to really quite vitriolic attacks in personal emails and in the media and that’s what’s been one the most regrettable aspects of what’s happened’.

The director of the MRC Centre for Global Infectious Disease Analysis at Imperial authored the report containing the apocalyptic prediction that coronavirus could kill 500,000 Britons without action.

Professor Ferguson’s devastating conclusion persuaded Number 10 to perform a drastic U-turn and imposed the lockdown. Schools were closed and people told to stay at home.

But doubts have since been cast about the grim modelling, with rival academics accusing him of having a patchy record and others describing his work as ‘totally unreliable’.

He was previously instrumental in the decision that led to the cull of more than 6 million animals during the foot and mouth outbreak in 2001, which left rural Britain economically devastated.

Fellow researchers claim they have been unable to replicate his findings when they tried to do so using the same data model, branded by one expert as a ‘buggy mess’.

Professor Ferguson also said Britain has to be cautious about the lockdown changes Boris Johnson announced this week.

The Prime Minister dramatically unwound the coronavirus lockdown on Monday, in his plan to bring the country out of ‘hibernation’.

It has allowed a return for pubs, haircuts and weddings from July 4 and means family and friends can finally meet up indoors for the first time in months.

Professor Ferguson added: ‘Right now we are experimenting frankly. I don’t disagree with the policy changes announced this week.

‘But I would say we need to monitor their effects very closely and be prepared to row back a bit if we start seeing increases in case numbers.’

In the interview – aired in full tomorrow evening – he revealed he doesn’t expect to see a uniform resurgence in cases crop up across the country after July 4.

Instead, the UK is likely to be hit by local outbreaks in food production plants, work places and schools, Professor Ferguson said.

He added: ‘We will be playing in some senses, and it’s not a nice metaphor, a game of Whack-A-Mole of trying to suppress those outbreaks.

‘I think as we go into the autumn and winter there’s a bigger potential risk of more widespread community transmission.’

Professor Ferguson also revealed he did not present his findings directly to the Prime Minister, saying ‘that’s not how scientific advice works in the UK’.

And he claimed he welcomed the presence of the Prime Minister’s maverick chief aide Dominic Cummings in SAGE meetings.

Professor Ferguson told the BBC’s Nick Robinson: ‘I viewed it as an indication that Number 10 were taking the epidemic much more seriously.’

And he added any inquiry into the handling of the pandemic should be delayed until the end of this year.

He said: ‘Right now people are still heavily engaged in managing this epidemic and our exit from lockdown and setting up the track and trace system.

‘Towards the end of this year would about the sort of time I think would be appropriate to look back.’