Neil Gaiman travels 11,000 miles from New Zealand to get ‘some space’ from wife

Good Omens author Neil Gaiman has sparked outrage after he travelled 11,000 miles from New Zealand to the Isle of Skye so he and his wife could get ‘some space’.

The fantasy writer, 59, took to his blog on Thursday to describe his trip halfway  around the world from Auckland after he and singer Amanda Palmer hit a ‘rough place’ amid the coronavirus lockdown.

‘Hullo from Scotland, where I am in rural lockdown on my own,’ Gaiman wrote. ‘I’m half a world away from Amanda and [my son] Ash, and missing both of them a lot.’

He explained he had been living in New Zealand with Palmer and his son Ash, four, until two weeks ago, when the pair ‘agreed that we needed to give each other some space’ and he boarded a flight to London.

The pair, however, confirmed in a letter shared beneath the blog that they are ‘not getting divorced,’ and will ‘sort out our marriage in private.’

Gaiman said he borrowed a spare car from a friend after arriving in the UK and began the 600-mile drive north to his second home in Skye – despite Scottish officials urging Britons to stop travelling to the Islands.

The house, which Gaiman previously claimed is ‘cursed’, was purchased by the Hampshire-born author more than a decade ago.

Pictured: Neil Gaiman with his wife Amanda Palmer, who admitted they are going through troubles in their marriage earlier this month 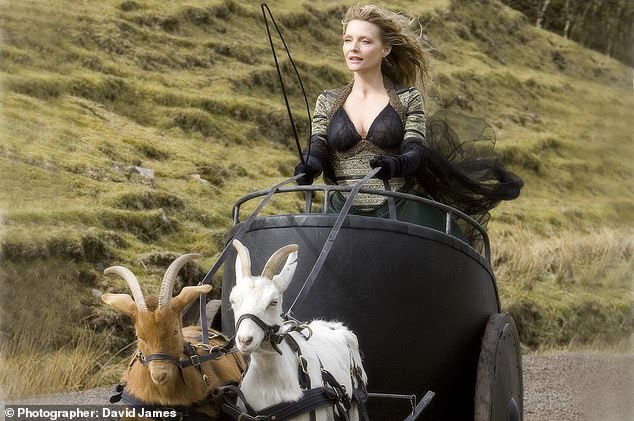 Pictured: Michelle Pfeiffer in Stardust, an adaptation of Gaiman’s 1997 fantasy novel which was partially filmed in Skye

His decision to make the 11,000-mile trip from Auckland to Skye, via Los Angeles and London, has been heavily criticised by Scots who have dubbed the author ‘selfish’ for reportedly flouting ‘essential travel’ rules.

‘Neil, we’re in a lockdown in Scotland,’ one Twitter user wrote. ‘Maybe don’t encourage folk to travel to a second home – especially in small island communities.

‘I’m sorry for your troubles and sympathise with your situation but we are doing our best to save lives right now and that means every stay put.’

Another added: ‘Whilst I appreciate you’re going through relationship drama I would have hoped that your common sense wouldn’t have eluded you.

‘Scotland is in lockdown, no unnecessary travel. Your selfishness is staggering.’

Gaiman responded that he simply ‘went home,’ writing: ‘I’m currently a UK tax payer, and on the Scottish voting rolls. I went home.’ 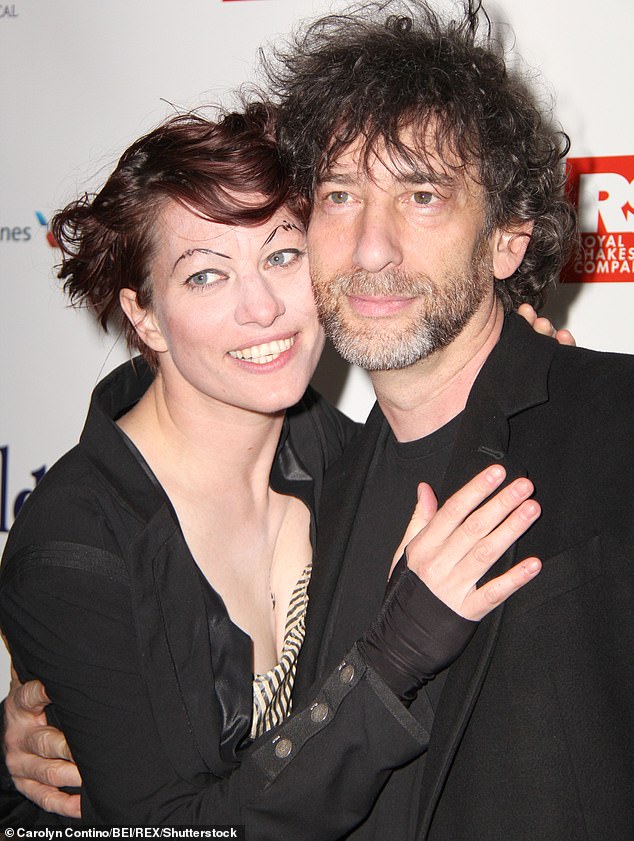 Gaiman (pictured with Palmer in 2013) sparked outrage after he travelled 11,000 miles from New Zealand to the Isle of Skye to get ‘some space’ from his wife 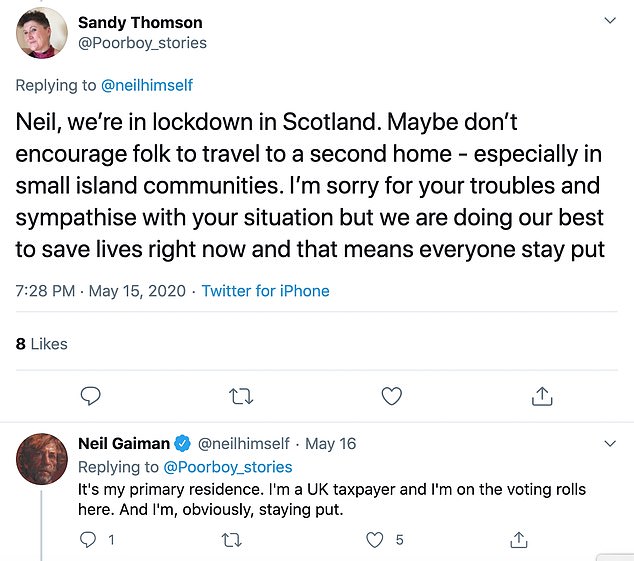 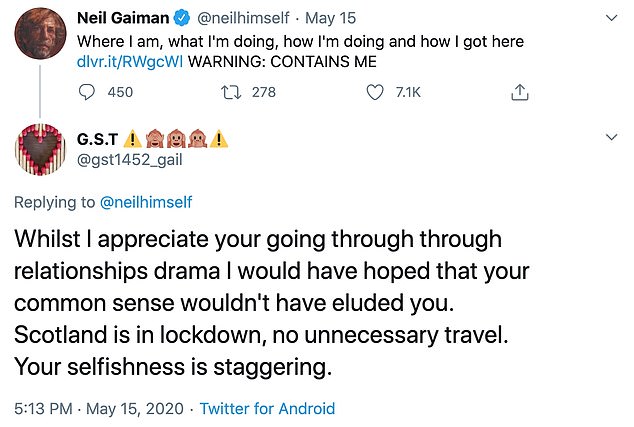 His decision to make the 11,000-mile trip from Auckland to Skye, via Los Angeles and London, has been heavily criticised by Scots who have dubbed the author ‘selfish’ for reportedly flouting ‘essential travel’ rules

Gaiman responded that he simply ‘went home,’ writing: ‘I’m currently a UK tax payer, and on the Scottish voting rolls. I went home’

‘What is it about people, when they know we are in the middle of the lockdown, that they think they can come here from the other side of the planet, in turn endangering local people from exposure to this infection that they could have picked up at any step of the way?’ local MP Ian Blackford added, according to the Sunday Times.

‘To descend on this island at this time, when we have a serious outbreak, which has resulted in such tragic circumstances — it pays scant respect to the families of the bereaved and the people who live here.’

Scotland’s tourism secretary Fergus Ewing urged tourists to stop travelling to the Highlands and Islands in a bid to slow the spread of Covid-19 at the very start of the outbreak in March.

In a statement released on March 21, he said: ‘I am furious at the reckless and irresponsible behaviour of some people travelling to the Highland and Islands.

‘This has to stop now. Let me be crystal clear, people should not be travelling to rural and island communities full stop. They are endangering lives. Do not travel.’ 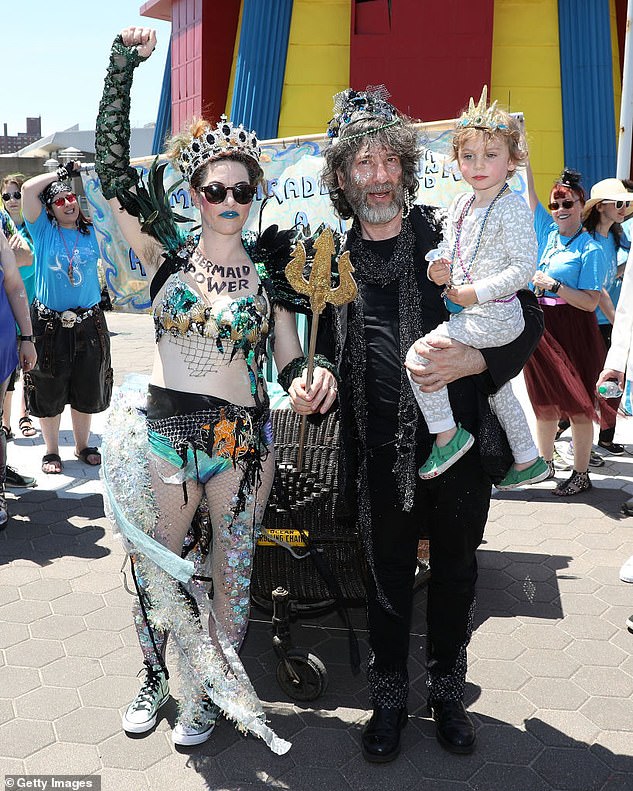 Pictured: Gaiman and Palmer with their son Anthony – known as Ash – during the Coney Island Mermaid Parade in New York 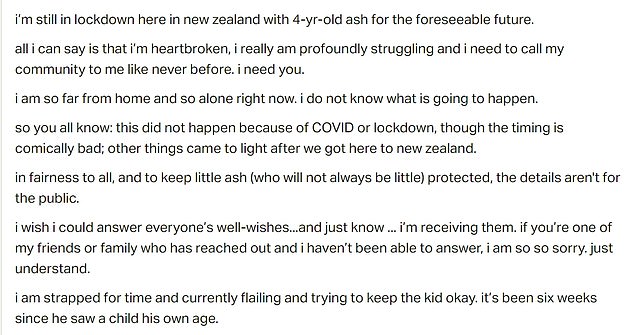 Dresden Dolls singer Palmer, 44, revealed earlier this month Gaiman had left New Zealand while she and their son Anthony – known as Ash – remained

Gaiman’s decision to relocate to Skye came shortly before an outbreak of the deadly virus at the Home Farm Care Home in Portree. Here, 59 residents and staff have been infected with coronavirus, with 10 fatalities reported.

The outbreak was first detected the care home in April, and the patients were the first confirmed cases of Covid-19 on the island.

Scotland has confirmed 14,447 cases of coronavirus, with 2,094 deaths reported across the area.

Dresden Dolls singer Palmer, 44, revealed Gaiman had left New Zealand while she and their son Anthony – known as Ash – remained in lockdown in a separate blog post on May 4.

She wrote: ‘Since people are getting confused and asking and my phone and inbox is blowing up with “where’s Neil?” a few times a minute …

‘I can only gather that he’s finally told the internet that he’s left New Zealand, and I thought I would come here with a short note.

‘I’m still in lockdown here in New Zealand with four-year-old Ash for the foreseeable future. ‬

‘All i can say is that i’m heartbroken, I really am profoundly struggling and I need to call my community to me like never before.‬ I need you.’ 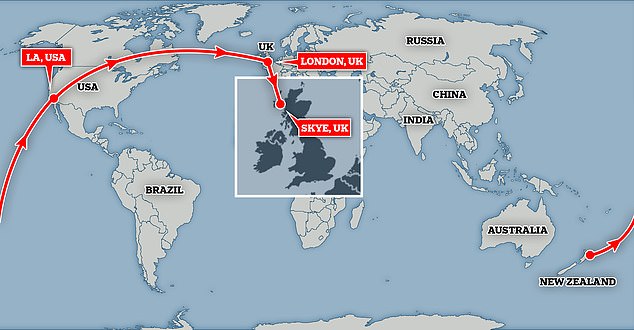 Gaiman flew from Auckland, New Zealand to London via Los Angeles, before driving from the capital to Skye

Gaiman added on Twitter that the pair were ‘going through rocky times,’ before detailing his journey in another blog posted on Thursday.

Gaiman confirmed on Twitter that the pair were ‘going through rocky times,’ before detailing his journey in subsequent blog posted on Thursday.

‘I was in New Zealand with them until two weeks ago, when New Zealand went from the Level 4 lockdown it had been on for the previous 5 weeks down to Level 3,’ he wrote. ‘I flew, masked and gloved, from empty Auckland airport to LAX, an empty international terminal with only one check in counter open – the one for the BA flight from LAX to London.

‘Both flights were surreal, especially the flight to London. Empty airports, mostly empty planes. It reminded me of flying a week after 9/11: everything’s changed.

‘I landed in London about ten in the morning, got a masked car service to a friend’s house. He had a spare car (bought many years ago as a birthday present for his daughter, but she had never learned to drive), with some groceries for me in a box in the back, waiting in the drive, with the key in the lock.

‘I drove north, on empty motorways and then on empty roads, and got in about midnight, and I’ve been here ever since.’

In a letter signed by both Gaiman and Palmer shared beneath the blog, the pair insisted they are ‘not getting divorced,’ but will ‘sort out our marriage in private.’

‘We love each other very deeply. As sometimes happens during the course of a long marriage, we have hurt each other,’ the letter said. ‘We have lived our lives individually, and then as a couple, very publicly (and right now, too publicly).

‘We have been trying to figure out how best to love each other for twelve years. It is fair to say that this relationship has been the hardest, but also the most rewarding, collaboration of our lives.

‘Living in lockdown is hard. Working on a marriage, as everyone married knows, is also hard. And we are very aware there are thousands, probably millions of people who have been dealing with their own versions of problems like ours over the last few months – and many face situations that are far worse.

‘We will sort out our marriage in private, which is where things like this are best sorted.’

A spokesperson for Gaiman has been contacted for comment.