His granddaughter Zamaswazi Dlamini-Mandela looked emotional and wiped away tears as she attended the event.

She also laid a wreath by a memorial stone in her grandfather’s name.

The dedication was led by The Dean of Westminster, The Very Reverend Dr John Hall and attended by South African High Commissioner to the United Kingdom Nomatemba Tambo, who gave an address.

Princess Eugenie looked glamorous in green as she led guests at the reception event celebrating the work of anti-apartheid hero Andrew Mlangeni. 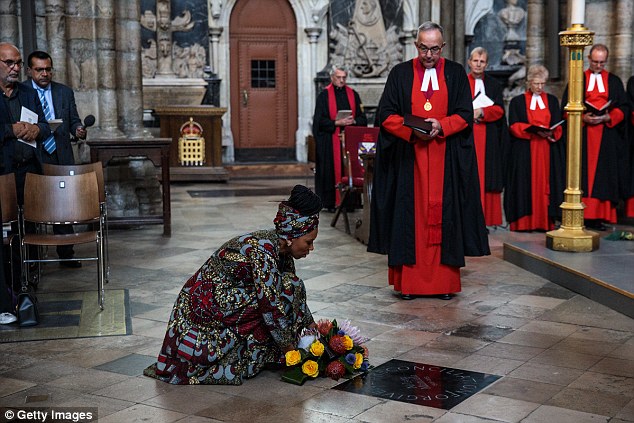 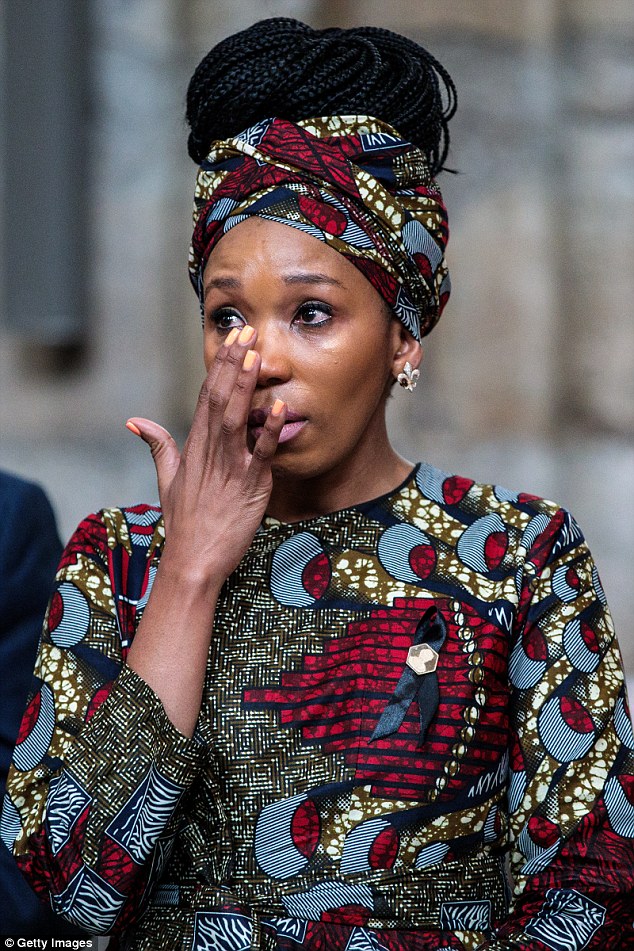 Zamaswazi Dlamini-Mandela, granddaughter of Nelson Mandela, wipes away tears as she attends a service to mark the centenary of the birth at Westminster Abbey 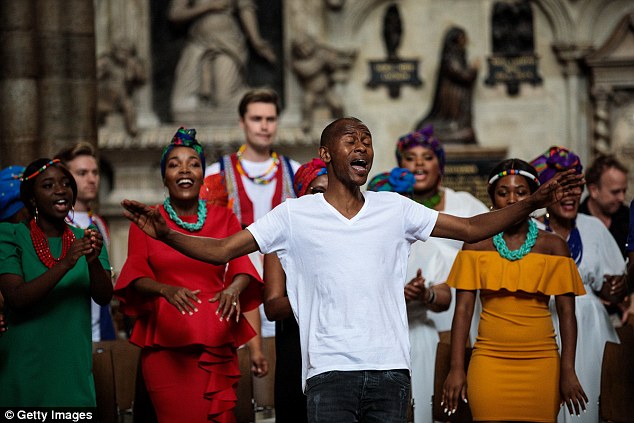 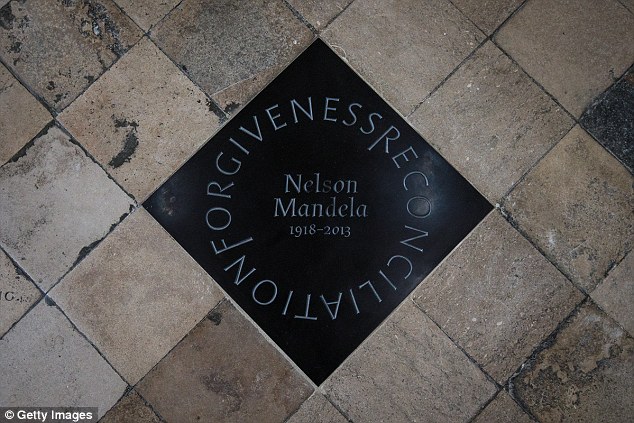 A memorial stone in Mandela’s name with the words: ‘Forgiveness, respect, conciliation’

The royal, 28, beamed as she shook hands with Mr Mlangeni, 93, at the reception at Coutts private bank in London on Wednesday night.

Mr Mlangeni, a former member of the South African parliament, was close friends with Nelson Mandela and stood alongside him in his fight for equality.

The men were also imprisoned on Robbin Island at the same time. 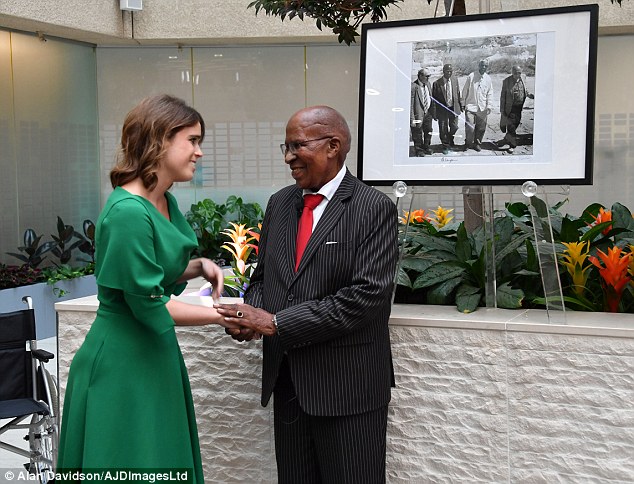 The activist was recognised at an event hosted as part of the Nelson Mandela 100th birthday celebrations this week.

It comes days after the Duke and Duchess of Sussex attended the opening of a Mandela centenary exhibition on London’s South Bank.

Eugenie, who today announced she would be inviting 1200 members of the public to attend her wedding to Jack Brooksbank in October, looked in suitably good spirits as she made the appearance.

Dressed in an emerald green silk dress featuring a boat neck and  asymmetric hemline, the piece accentuated her waist.

Perhaps having taken tips from Meghan, Eugenie wore the exact same pair of Aquazzura £550 nude heels the Duchess of Sussex wore to her engagement photcall with Harry.

With her brunette hair blow-dried into soft curls, Eugenie was seen beaming as she met Mr Mlangeni.

The royal, who today announced she would be inviting 1200 members of the public to attend her wedding to Jack Brooksbank in October, looked in suitably good spirits as she made a chic appearance

Perhaps having taken tips from Meghan, Eugenie wore the exact same pair of Aquazzura £550 nude heels the Duchess of Sussex wore to her engagement photcall with Harry A whole array of events are taking place giving an insight into Mr Mandela’s journey from young anti-apartheid campaigner to becoming the inspiration for an international movement against South Africa’s violent and oppressive system.

It is based around six themes – Character, Comrade, Leader, Prisoner, Negotiator, Statesman – all made up of information and photo panels, along with films and archive items from different periods of Mandela’s life.

In 1962, Mr Mandela he was arrested for conspiring to overthrow the state and sentenced to life imprisonment in the Rivonia Trial. He served 27 years in prison, split between Robben Island, Pollsmoor Prison, and Victor Verster Prison. 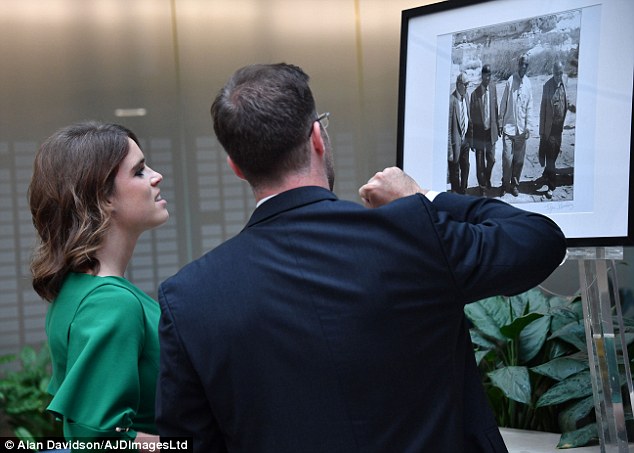 Eugenie looks at a photo of Mr Mlangeni and Nelson Mandela revisiting Robben Island in 1994. Both men were imprisoned there during the Apartheid

With her brunette hair blow-dried into soft curls, Eugenie was seen beaming as she made her way to meet Mr Mlangeni 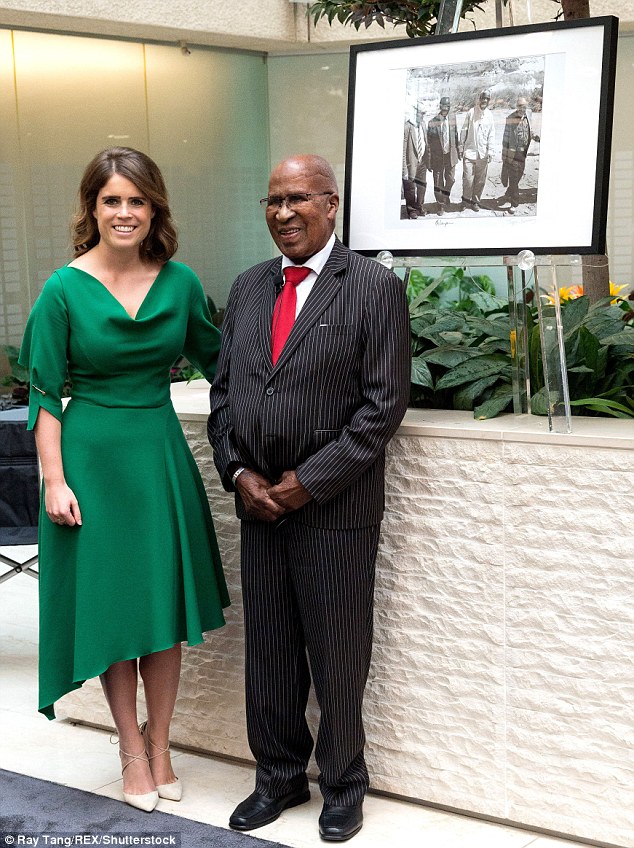 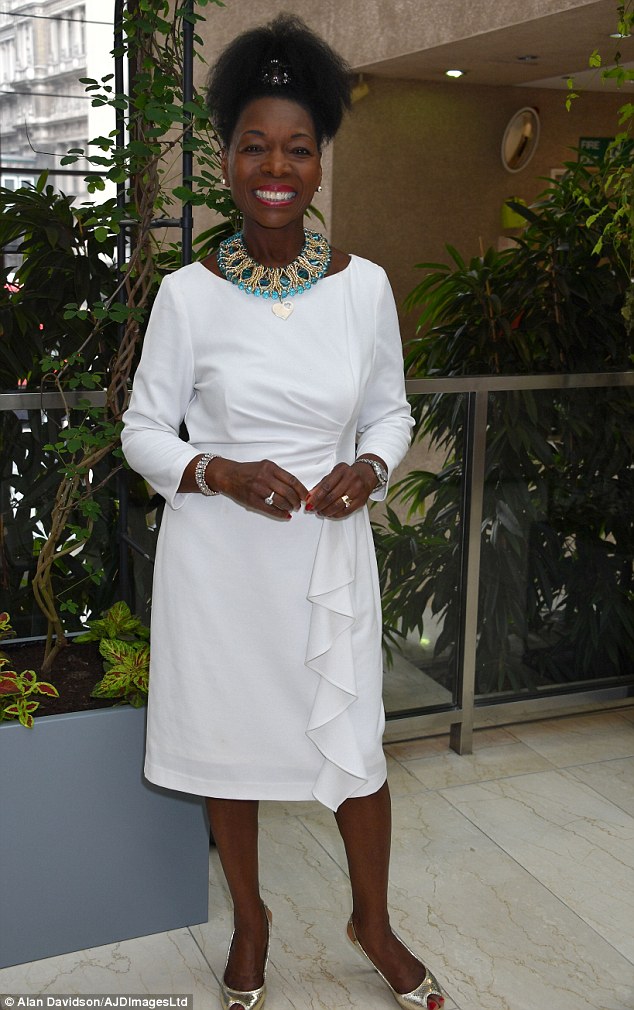 Other attendees on the night included Baroness Floella Benjamin 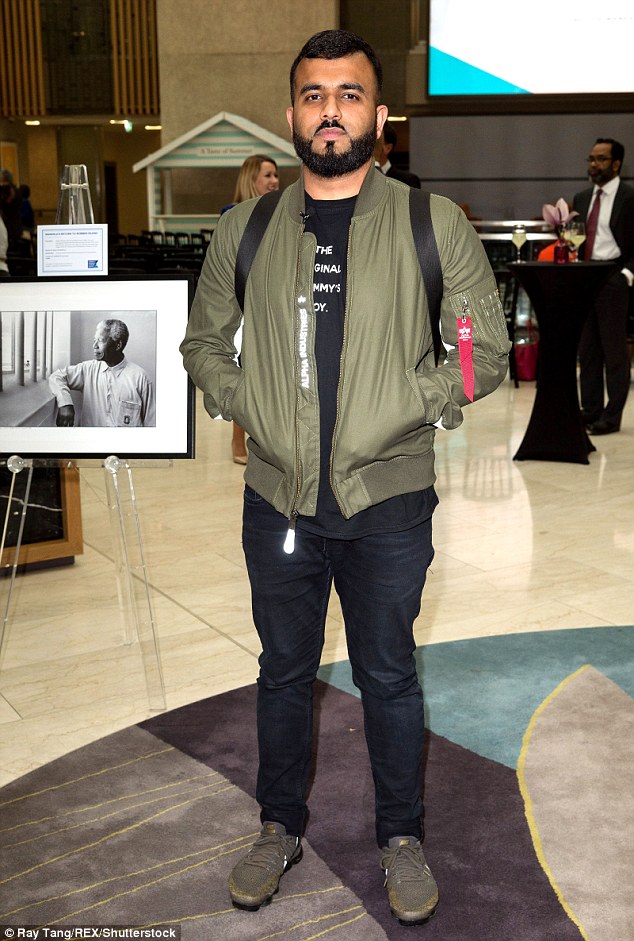 Musician Hussain Manawer also put in an appearance at the event

Amid growing domestic and international pressure as well as increased fears of a racial civil war, President F. W. de Klerk released him in 1990.

One of Mr Mandela’s fellow prisoners during his incarceration was Mr Mlangeni, who stood trial accused of sabotage against the then apartheid government and spent 26 years in prison on Robben Island with Mandela.

The 93-year-old told of how being faced with the collection of artefacts and pictures which ‘brought back so many memories’.

He praised Harry and Meghan’s visit, saying: ‘To me, it’s an indication of the importance. I am hopeful that we will do more to teach the young generation about the history and especially of our struggle in South Africa, where we come from and where we are at present. This exhibition I think will help in showing the younger people.’