A far-right paedophile gave a Nazi salute today as he was jailed for life after plotting to murder Labour MP Rosie Cooper and threatening to kill a police officer.

Jack Renshaw bought a 19-inch replica Roman sword and announced his plans to kill the West Lancashire MP as part of a ‘white jihad’ at a pub in Warrington in July 2017.

The 23-year-old, from Skelmersdale in Lancashire, also threatened to kill detective Victoria Henderson, who was investigating him for grooming two young boys.

His plan was scuppered by whistleblower Robbie Mullen, from Widnes, Cheshire, who was at the same Cheshire pub when Renshaw revealed his chilling plans.

Last month a re-trial failed to reach a verdict on whether Renshaw remained a member of the far-right terrorist group National Action after it was banned.

But today he was jailed for life at the Old Bailey in London for the plot against Ms Cooper and threats towards DC Henderson and told he must serve a minimum term of 20 years.

As he was led away, Renshaw raised his arm in an apparent Nazi salute as a supporter in the public gallery shouted ‘we’re with you Jack’. 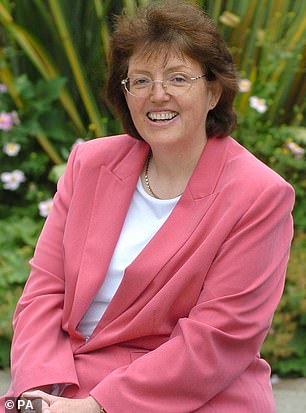 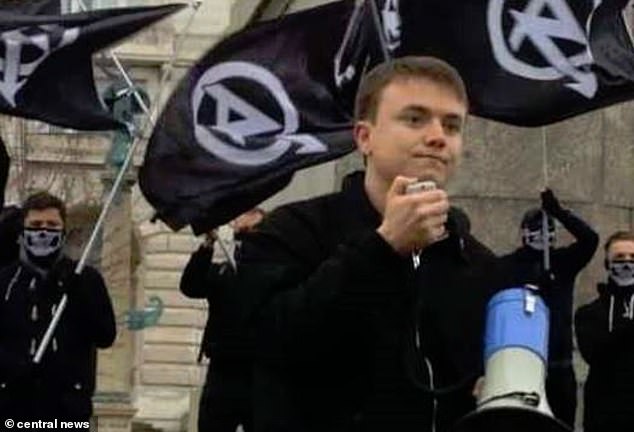 Jack Renshaw (pictured above) had previously attended National Action rallies before plotting to kill an MP. A re-trial last month failed to reach a verdict on whether Renshaw remained a member of the far-right terrorist group after it was banned 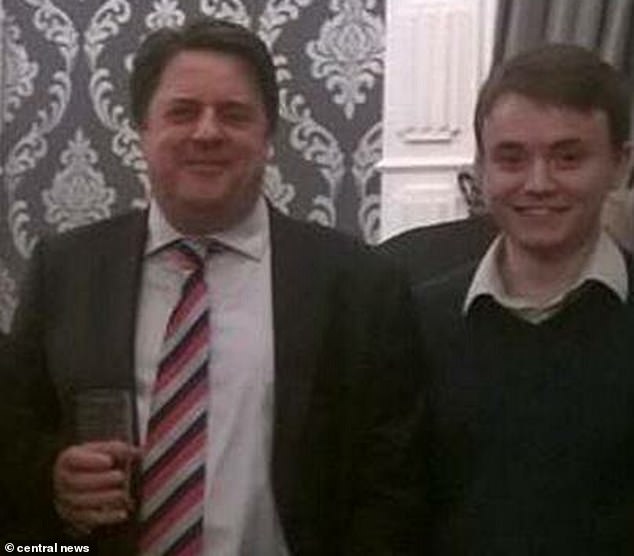 Jack Renshaw (right) had once been a British National Party youth leader. He is pictured here alongside Nick Griffin, who served as chairman and then president of the BNP from 1999 to 2014 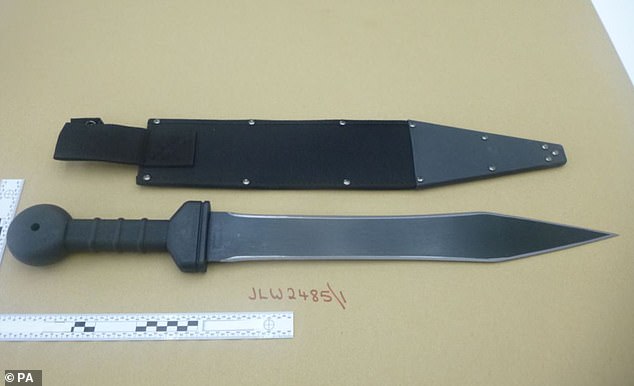 Renshaw bought a 19-inch replica Roman sword, known as a ‘Gladius knife’ to kill Ms Cooper and exact revenge on detective Victoria Henderson who was investigating him for child sex offences

Sentencing Renshaw, Mrs Justice McGowan said: ‘Your perverted view of history and current politics has caused you to believe it right to demonise groups simply because they are different from you.’

She added: ‘This is a case in which only a sentence of life imprisonment can meet the appalling seriousness of your offending.’

‘The dignity and bravery they have demonstrated show the true public spirit and public interest that motivated their work,’ she said.

Speaking after the hearing today, Ms Cooper said in a statement: ‘My deepest wish is that this case is the last occasion when any public servant, any politician, has their life threatened for simply doing their job.

‘I believe today justice has been served. Not for me personally, but for every MP and public servant, and for our democratic way of life which affords us the privilege of free speech, without fear of violent retribution.’ 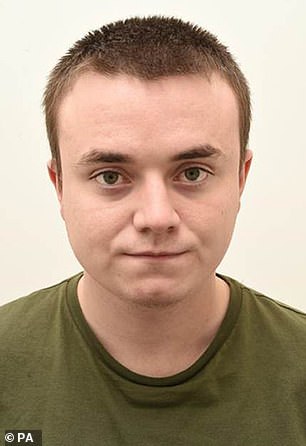 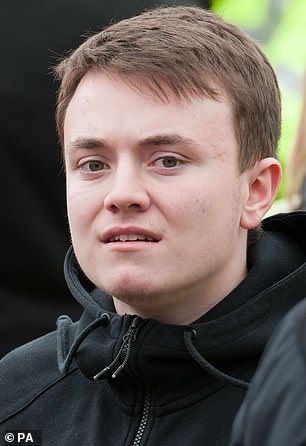 Neo-Nazi Jack Renshaw, 23, has been jailed at the Old Bailey for life with a minimum term of 20 years after plotting to murder Labour MP Rosie Cooper and threatening to kill a police officer 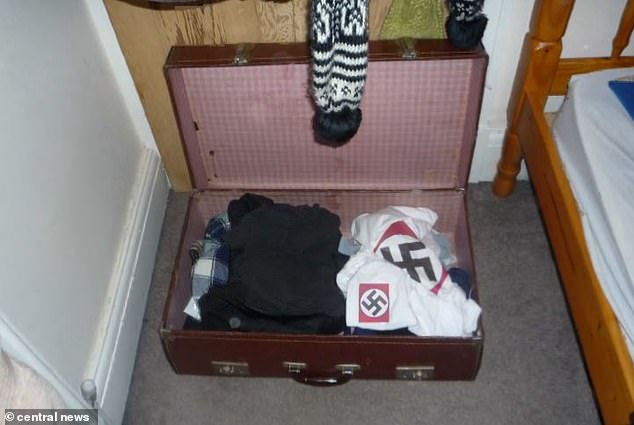 The contents of Renshaw’s suitcase was revealed after he was arrested. It was shown to hold clothing emblazoned with the Swastika 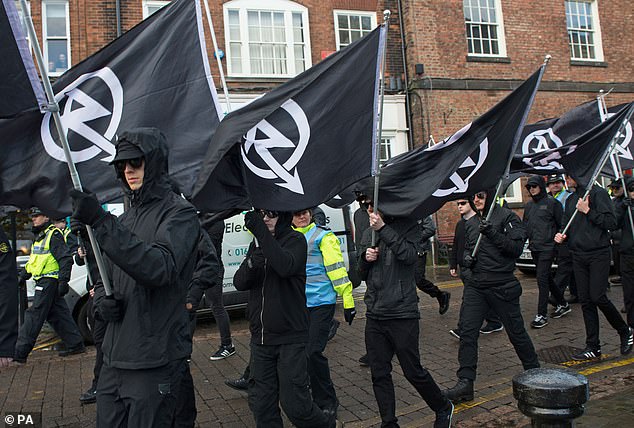 While Ms Henderson told the court today that knowing what Renshaw was planning to do to her: ‘makes me feel physically sick.’

Following his re-trial in April it was revealed that Renshaw, a former BNP youth leader, is a convicted paedophile who was jailed last June for 16 months.

He was found guilty of grooming two underage boys – aged between 13 and 15 at time – using a fake Facebook profile.

Jurors at Preston Crown Court found him guilty of four counts of inciting a child to engage in sexual activity.

He also received a three-year prison sentence two months earlier when he was found guilty of stirring up racial hatred after he called for the genocide of Jewish people.

But he denied membership of banned extreme right-wing group National Action and a jury was discharged when they failed to reach a verdict.

Who is Jack Renshaw and what are his offences?

2014 – Declares in a blog that Jewish people are traitors and should be killed. He also appears in a video titled ‘BNP Youth Fight Back’

January 11, 2017 – Arrested for hate crimes and terror offences after the arrest of National Action members across the UK

July 1, 2017 – tells friends he would murder Rosie Cooper and take hostages in a pub

July 5, 2017 – charged by the CPS under pressure from the Campaign Against Anti-Semitism

April 2, 2019 – trial for membership of National Action where the jury was unable to reach a verdict

The organisation is hostile to democracy and the British state and has sought to radicalise young people through violent imagery and ‘hate-filled’ social media messages, as well as street demonstrations and intimidation of local communities.

It was banned in in December 2016 by then-Home Secretary Amber Rudd after the group declared its support of the murder of Batley and Spen MP Jo Cox.

National Action leader Christopher Lythgoe, 32, of Warrington, and his right-hand man Matthew Hankinson, 24, from Merseyside, who were present when Renshaw outlined his plans, were convicted of membership last year.

He had revealed the plans just a year after Labour MP Jo Cox was stabbed and shot by a fellow far-right extremist, Thomas Mair.

Renshaw had been arrested on January 11, 2017 for stirring up racial hatred in relation to two speeches he made, and as a part of the investigation his phone was examined.

Detective Victoria Henderson discovered evidence of Renshaw’s perverted affairs with the underage boys and arrested him again on May 19.

Renshaw had told DC Henderson in interview that she was fabricating evidence for ‘the two worst things anyone could be – a homosexual and a paedophile’.

He was released on bail and began researching DC Henderson in preparation for the revenge attack.

The paedophile was so determined to stop the detective revealing his paedophilia that he plotted to kill his local MP in a pub.

He claimed this would involved taking hostages and luring in DC Henderson to silence her before committing ‘suicide by cop’.

It was at the Friar Penketh pub in Warrington that he revealed his plans, at a meeting with the leader of National Action, Christopher Lythgoe and others.

He told the Old Bailey at an earlier hearing how he spent just under a month planning to kill Ms Cooper to ‘send the state a message’.

Renshaw had criticised Adolf Hitler for what he believed was showing Jewish people ‘mercy’.

Jurors heard a speech he delivered to the Yorkshire Forum for Nationalists in 2016 in which he said: ‘I do actually have some problem with the statement ‘Hitler was right’ in many senses but you know where he was wrong?

‘As nationalists, we need to learn from the mistakes of the National Socialists and we need to realise that no, you do not show the Jew mercy.’ 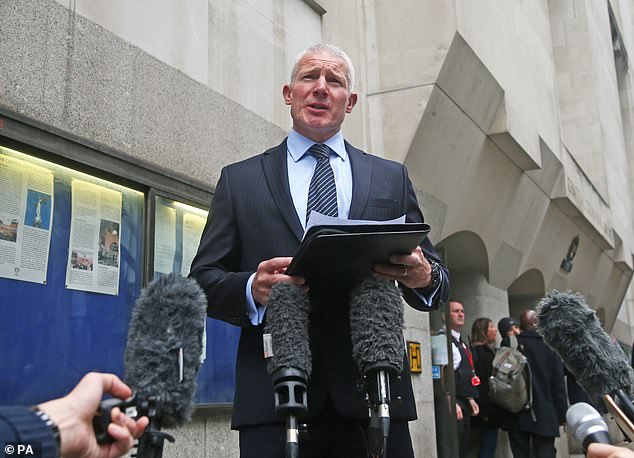 Renshaw had planned to make a ‘white jihad’ video explaining his motives for the terror attack. But he was arrested on July 5, 2017.

He had also conducted internet searches during May 2017 in relation to cutting of the jugular artery and how long it would take to die after suffering such a wound in preparation for his plan.

At an earlier hearing, Robbie Mullen, who reported Renshaw’s plans to Hope Not Hate, recalled hearing Renshaw reveal his plans in the pub.

Mr Mullen, who was granted immunity from prosecution, told jurors: ‘He said he was going to kill his local MP, Rosie Cooper. I said ‘Are you sure?’ and he said ‘Yeah’.

‘He said he would kill her, then try to take some hostages to lure the police officer that was investigating him to try to kill her because she was the reason behind it all.

‘He said his mind was made up. He had bought a machete.’ 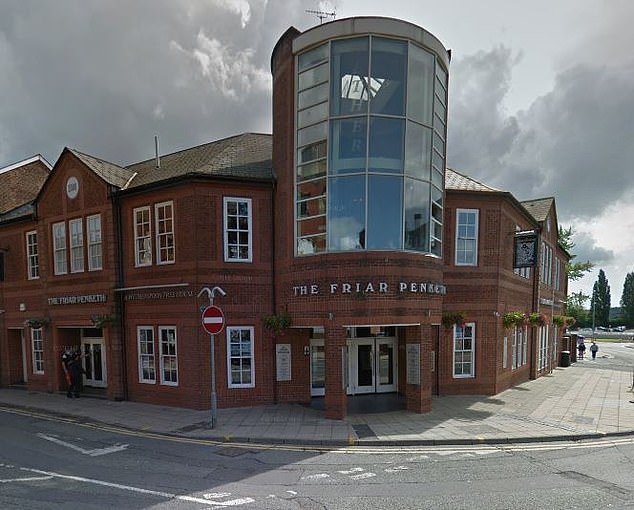 It was at the Friar Penketh pub in Warrington that Renshaw revealed his plans, at a meeting with the leader of National Action, Christopher Lythgoe and others

Renshaw said he would wear a fake suicide vest so he would be killed by police, Mr Mullen added.

Renshaw declined to give evidence in his retrial, but in his first trial last year explained his reasons for targeting Ms Cooper.

He said: ‘I wanted to send a message to the state that if you beat a dog long enough it bites – she just happened to be my local MP.’

Ms Cooper earlier this year spoke in the House of Commons about the planned attack by Renshaw, as she slammed the abuse politicians sometimes face.

‘Members of this house are regularly abused and attacked. Our freedoms, our way of life, our democracy is under threat and we must do our utmost to defend it.