Two men are are arrested after their two roommates were murdered, and now the feds are investigating their ties to a neo-Nazi group and the possibility they were planning an attack on the public.

The four men, who were living together in Tampa, Florida, were members of an obscure neo-Nazi group called Atomwaffen Division. Devon Arthurs, the group’s 18-year-old co-founder, told detectives that he killed his roommates to thwart a terrorist attack by Atomwaffen.

‘I prevented the deaths of a lot of people,’ Arthurs said in a rambling statement about shooting his roommates Andrew Oneschuk, 18, and Jeremy Himmelman, 22 in May 19. 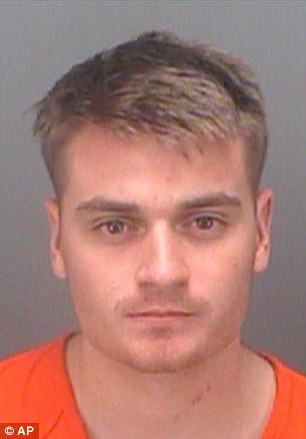 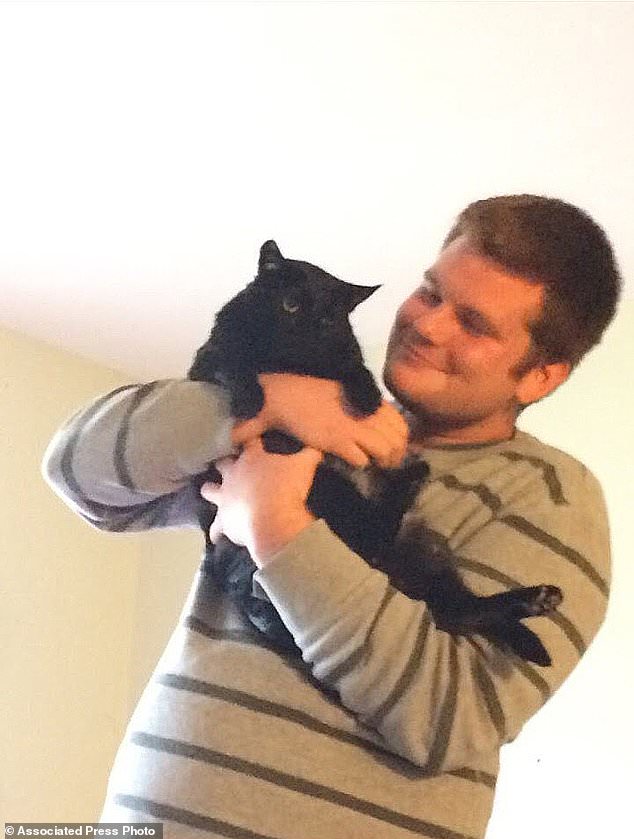 Jeremy Himmelman was fatally shot along with his friend Andrew Oneschuk, 18, by a roommate in the Tampa apartment the men all shared 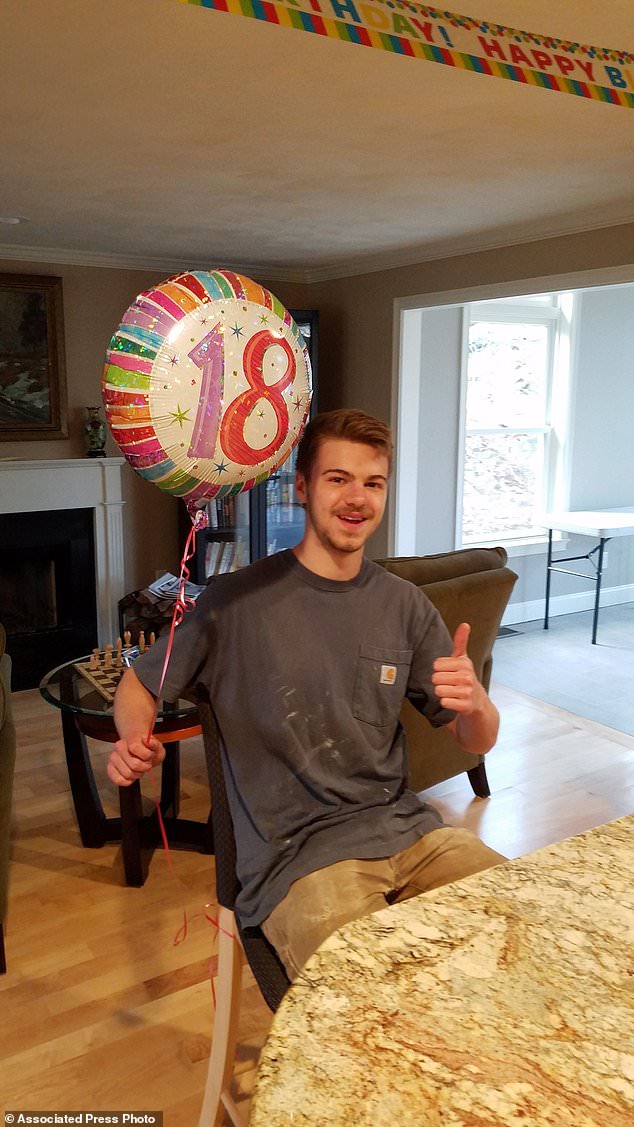 Andrew Oneschuk during his 18th birthday at his family’s home in Massachusetts. Arthurs told police detectives he killed his roommates Oneschuk Jeremy Himmelman

Their other roommate, Brandon Russell, 21, was at his Florida National Guard duties, when the shootings occurred and Arthurs said knew nothing about the killings.

FBI agents have filed explosives charges against Russell, who was dressed in a military uniform and crying outside the apartment when Arthurs led officers to the grisly scene.

Asked why his roommates would plan such an attack, he responded, ‘Because they want to build a Fourth Reich.’

Inside the apartment the men shared, authorities said they found guns, ammunition and bomb-making material, along with a framed picture of Oklahoma City bomber Timothy McVeigh on a bedroom dresser.

Atomwaffen is German for ‘atomic weapon.’

The victims’ families insist, however, that the two slain young men were transitioning to new phases in their lives.

And another Atomwaffen member characterizes the group as simply a band of trolls who delight in provoking outrage with stunts like picketing at a vigil for victims of the Orlando nightclub shooting. 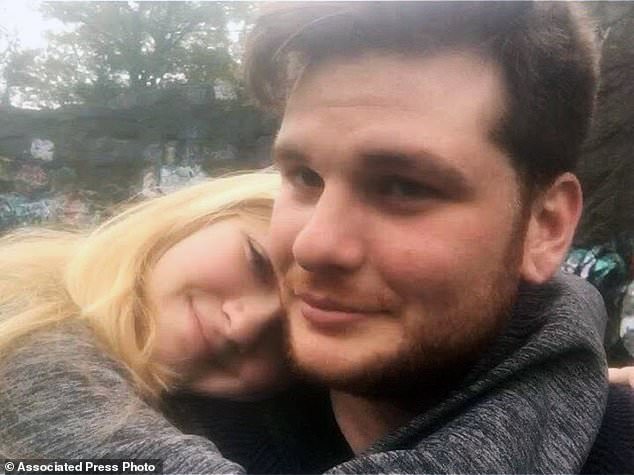 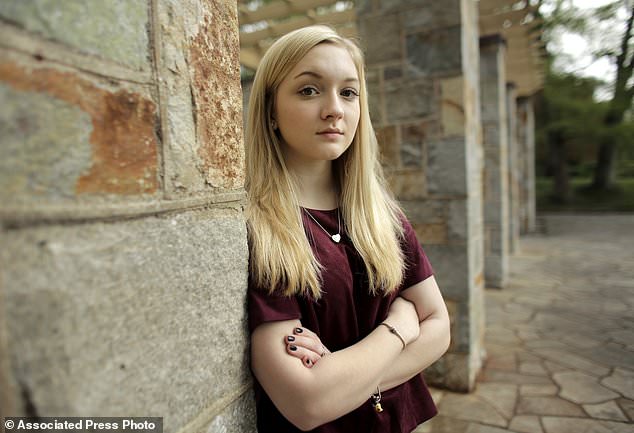 ‘I’m a neo-Nazi. I’m not a monster,’ a fried of the men, William Tschantre, said.

Atomwaffen doesn’t have near the numbers or the notoriety of some of the white nationalist and neo-Nazi groups that gathered in Charlottesville, Virginia, for this month’s deadly rally.

Tschantre and others estimate that it has only a few dozen members nationwide.

But federal investigators say they believe the May 19 shooting exposed evidence of a credible threat to the public.

In the condo’s garage, they say they found volatile explosive material stored in a cooler, near homemade detonator components and several pounds of ammonium nitrate. Two sources of radiation also were detected on the premises, they say.

FBI agents have filed explosives charges against Atomwaffen’s leader, 21-year-old Brandon Russell, who was dressed in a military uniform and crying outside the apartment when Arthurs led officers to the grisly scene.

Arthurs said Russell, who had just returned home from his Florida National Guard duties, knew nothing about the killings. But he accused Russell of stockpiling explosives to bomb power lines, nuclear reactors and synagogues.

Russell told investigators that he had used the material to boost homemade rockets, but a federal judge agreed he posed a risk to the public and ordered him detained.

The judge added, however, that he was troubled investigators hadn’t presented more evidence to corroborate Arthurs’ claims about Atomwaffen.

The slain men’s relatives and friends reject any neo-Nazi labels, but do not dispute that they shared an interest in right-wing ideologies.

Kianna Kaizer, Himmelman’s girlfriend, called his ‘political side’ only a small part of his life but acknowledged he held decidedly far-right beliefs.

‘Jeremy went through a lot of struggle in his life, and national socialism offered him the rigidity he desired, and offered him solutions for the things out of his control,’ she wrote in an email.

Walter Oneschuk said that when Andrew was 15, he had blocked his son’s computer from accessing sites rife with racist and anti-Semitic content. But he said Andrew changed after briefly joining the French Foreign Legion last November, just six months shy of turning 18.

Andrew’s fervor for far-right extremism waned after his return from France, Oneschuk said. ‘He realized this stuff was not his future,’ the father said.

It was the lure of free rent and bountiful fishing opportunities that convinced Himmelman and Oneschuk to leave Massachusetts and spend part of the summer in Florida.

Himmelman had toyed with joining the military, but instead planned to use the time to plot his next move, friends and family said.

Andrew Oneschuk’s father said his son had met with a Navy recruiter in April and looked forward to a military career.

Tensions between the four roommates quickly mounted. Kaizer said Himmelman and Oneschuk often teased Arthurs for having no job and spending most of his time playing video games.

Oneschuk told his father that he was tired of Arthurs’ attempts to convert him to Islam.

The night before the shooting, Arthurs argued with them about his conversion during an online chat, Tschantre said.

Himmelman and Oneschuk didn’t join in the chat, but Tschantre said he suspects the heated exchange could explain how Arthurs’ anger turned into violence the next evening.

In anonymous internet posts, Atomwaffen members hailed Oneschuk and Himmelman as fallen heroes and assailed Arthurs as a race traitor. A tribute on IronMarch, a website for the ‘global fascist fraternity,’ included swastika-stamped photos of the slain men.

Days following the murder of the two men, Atomwaffen posted an ominous video on YouTube depicting members standing with arms extended in ‘Heil Hitler’ salutes and posing with guns in front of a swastika flag, their faces obscured by images of skulls. It ended with a stark slogan: ‘Join your local Nazis.’

In a 2015 post on IronMarch, Russell had described Atomwaffen as a ‘fanatical, ideological band of comrades who do both activism and militant training.’

‘Keyboard warriorism is nothing to do with what we are,’ he wrote.