Netflix could be ready to dive into video games and interactive programming, revving up by searching for an executive to oversee new expansion

Netflix might be planning to expand into the $150 billion video game industry, according to a media report.

The popular streaming company is ‘excited to do more with interactive entertainment’ beyond its popular offerings ‘from series to documentaries, film, local language originals and reality TV’, a spokesperson told DailyMail.com.

‘Members also enjoy engaging more directly with stories they love – through interactive shows like Bandersnatch and You v. Wild, or games based on Stranger Things, La Casa de Papel and To All the Boys. So we’re excited to do more with interactive entertainment.’

The Information, which first broke the news, reports that the Los Gatos, California-based company has approached veteran executives in the industry to lead its efforts.

At this time, it’s unclear what Netflix’s strategy would be; one source told the tech news outlet, ‘Strategy TBD.’

Netflix has done some ‘very basic things’ in the gaming industry, said co-CEO Reed Hastings on the company’s most recent earnings call in April.

‘In ways, we’re kind of in gaming now because we have Bandersnatch and, you know, we have some very basic interactive things,’ Hastings said.

Bandersnatch is a 2018 film on Netflix that let watchers make choices for certain characters that either lengthened or shortened the time of the movie.

In total, there are 250 segments of the film, totaling 150 minutes.

Netflix also competed with wildly popular game Fortnite for consumers attention, it said in its 2018 fourth-quarter letter to shareholders. In 2017, ‘Stranger Things: The Game’, based on the hit Netflix show, launched on mobile devices, designed by BonusXP, Inc.

Two years later, ‘Stranger Things 3: The Game,’ also designed by BonusXP, launched on both iOS and Android, as well as consoles such as the Nintendo Switch and Sony PlayStation.

Netflix is listed as a collaborator with publisher BonusXP on both video games.

Stranger Things 3: The Game is a collaboration between Netflix and BonusXP and is available on mobile devices and consoles 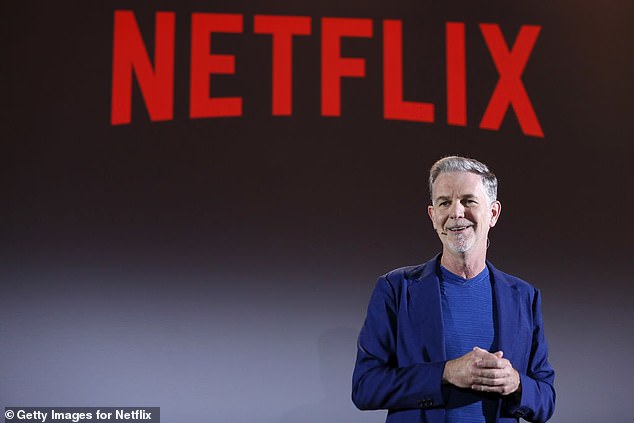 Netflix co-CEO Reed Hastings said the company does some ‘very basic things’ when it comes to video games, but the company might be expanding beyond streaming movies and TV shows

The company is ‘in the business of creating these amazing deep universes,’ adding it can certainly go further into interactive content, such as games, Netflix’s COO Greg Peters said.

‘We’re trying to figure out what are all these different ways that we can increase those points of connection, we can deepen that — that fandom and certainly, you know, games are a really interesting component of that,’ Peters said on the April call.

‘So whether it’s, you know, gamifying some of the linear storytelling redoing like interactive Bandersnatch and the kids’ interactive programs, that’s been super interesting. We’re going to continue working in that space for sure.’

Netflix’s CFO, Spencer Neumann, brings some expertise to the company. He spent time at video game developer Activision Blizzard before joining the streaming service in January 2019.

Four million subscribers joined the service in the first-quarter, well below Wall Street estimates of 4.8 million.

While the subscriber rate has slowed in the first quarter of 2021, the number of new subscribers has continued to increase quarter by quarter.

Europe region, which includes Africa and the Middle East, saw the largest growth in the first quarter of this year.