Netflix decided to publish anonymous love letters from fans after it released the teen romantic comedy To All the Boys I’ve Loved Before.

For those who are unaware, the young adult movie is about a teenager who wrote love letters to five boy she previously loved. Drama ensues when her love letters are mailed to the boys and, of course, there is a cheesy ending that makes everyone’s hearts swoon.

To capitalize on this adorable movie plot, which was adapted from a book written by author Jenny Han, Netflix encouraged its followers to send them anonymous love letters that they would publish for people who had crushes.

Cute: Fans have gone wild for the young adult movie To All the Boys I’ve Loved Before

Love: In honor of the new movie, Netflix asked people to submit their own anonymous love letters that the streaming site would post on Twitter 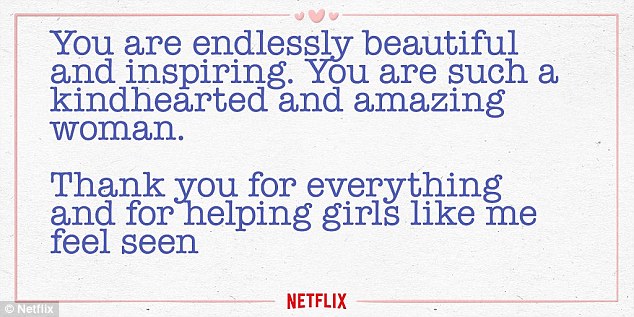 Amazing: One person wrote a love letter to Lana Condor who played Lara Jean in the movie

‘After watching To All the Boys roughly 37 times, I just want to see more love in the world,’ one Netflix social media manager wrote on Twitter.

The streaming site encouraged people to send in their own love letters and the Twitter page would publish them anonymously.

We can imagine, but it’s not confirmed, that Netflix was probably flooded with thousands of adorable love letters to be sent to people’s crushes worldwide.

The first love letter Netflix published was actually for Lana Condor who played the main character for the romantic comedy.

‘You are endlessly beautiful and inspiring,’ the note read. ‘You are such a kindhearted and amazing woman. Thank you for everything and for helping girls like me feel seen.’

People have commended the movie, which was released at the beginning of the month, for a number of reason. But Lana playing Lara Jean was raved about because it cast an Asian as the female lead in a romantic comedy, something that rarely happens in Hollywood.

So it only makes sense she would be the first among the public to receive a love letter from a fan. 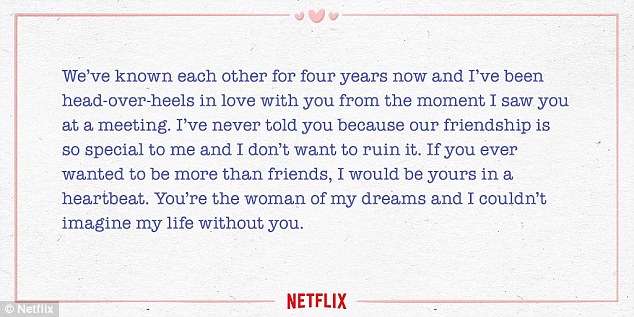 Special: Another person confessed to loving a crush for four years since they first met the person at a meeting 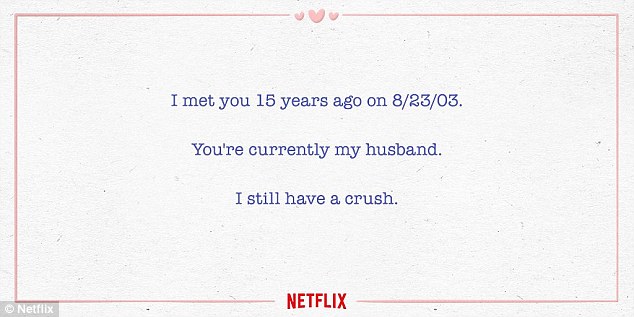 Romantic: Netflix didn’t just receive love letters from crushes. The site also received one who was already married to their crush 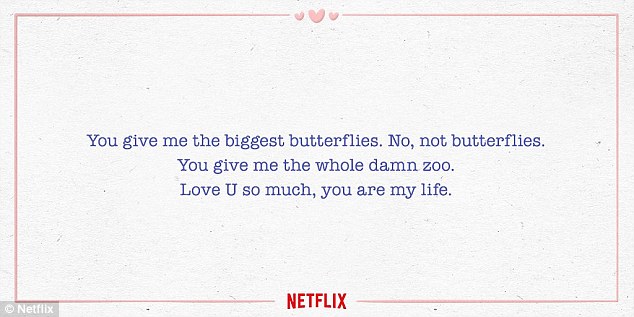 Cute: One person described their crush as not just giving them butterflies, but giving them the ‘whole damn zoo’

The second love letter read: ‘We’ve known each other for four years now, and I’ve been head-over-heels in love with you from the moment I saw you at a meeting.

‘I’ve never told you because our friendship is so special to me, and I don’t want to ruin it. If you ever wanted to be more than friends, I would be yours in a heartbeat.

‘You’re the woman of my dreams and I couldn’t imagine life without you.’

Not everyone wrote love letters to people who were unaware of their love. One person wrote one to someone they married.

Another person received a letter about how they give their crush butterflies every time they see them. 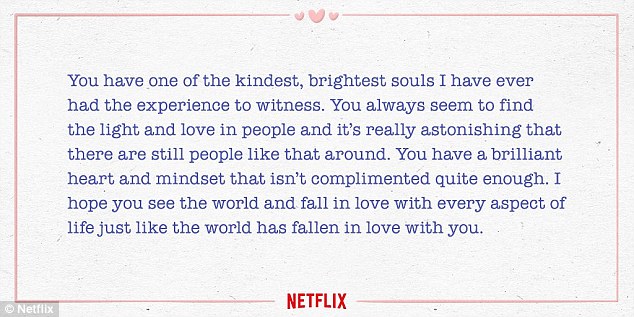 Huge fan: Noah Centineo, who played Peter Kavinsky, reportedly received hundreds of love letters from fans. Netflix sorted through all of them and posted this one 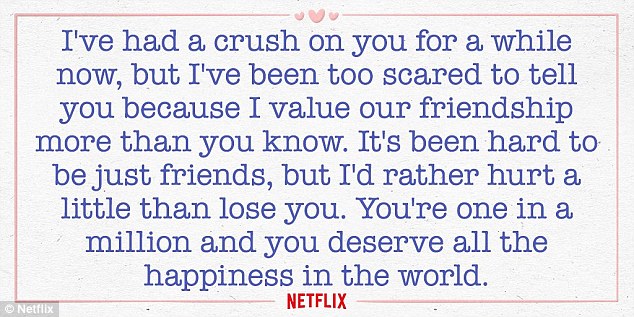 One in a million: One person described their crush as someone who ‘deserves all the happiness in the world’

Noah Centineo, who played Peter Kavinsky, received the most love letters out of anyone, the streaming site said.

But Netflix chose to publish only one very special note that stood out among the hundreds.

‘You have one of the kindest, brightest souls I have ever had the experience to witness,’ the letter began.

‘You always seem to find the light and love in people and it’s really astonishing that there are still people like that around.

‘You have a brilliant heart and mindset that isn’t complimented quite enough. I hope you see the world and fall in love with every aspect of life just like the world has fallen in love with you.’

The final love letter released by Netflix was for someone who their crush said deserved all the happiness in the world.

‘I’ve had a crush on you for a while now, but I’ve been too scared to tell you because I value our friendship more than you know,’ the anonymous person wrote.

‘It’s been hard to be just friends, but I’d rather hurt a little than lose you. You’re one in a million and you deserve all the happiness in the world.’

But people out there who have crushes could mail the letters themselves to see if they will have their own Lara Jean moment. We think Peter Kavinsky would approve.