This month, Netflix revealed that its energy usage for 2019 was almost double what it had been in 2018.

The company consumed the equivalent of what 40,000 average American homes would consume in a year.

It takes the equivalent amount of energy to keep Netflix’s streaming services running as 40,000 American houses would use in a year, and the company’s energy consumption nearly doubled between 2018 and 2019

94,000 megawatt hours went to keeping the lights on in its own offices and studio spaces.

Another 357,000 megawatt hours went to what the company terms ‘indirect electricity use.’

This includes all the electricity used by external companies to support its streaming service, including Amazon Web Services, Google Cloud, and servers maintained with various internet service providers around the world.

While Netflix’s energy usage is rising, it says it’s taking measures to reduce the environmental impact of that consumption.

Netflix points to their support for renewable energy projects in 20 countries around the world, including Brazil, Croatia, Colombia, South Africa, Vietnam, Turkey, Malaysia, and elsewhere. 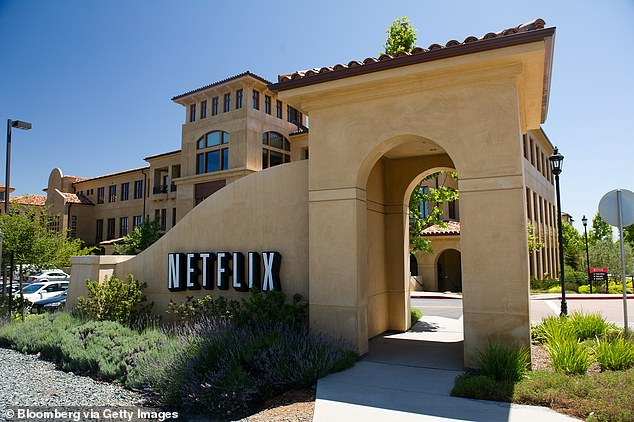 Netflix breaks its energy usage into two categories, one covers what its own offices and studios use, which account for around 20 percent of its total usage. The second category includes all the external partners like Amazon Web Services, which help keep its content available 24 hours a day

The company is also backing renewable energy development in 15 US states, including Alaska, Georgia, South Dakota, Texas, and New York.

Netflix acknowledges an unspecified percentage of its energy usage comes from non-renewable sources, but the company claims it offsets this usage with an equivalent amount of energy drawn from 100 percent renewable sources.

The company also highlights its efforts to promote environmentally conscious practices in its offices, and through the content it distributes.

‘In our offices, sustainable practices include donating excess food and reducing our use of paper,’ the company report states.

‘Finally, through content like Our Planet—featuring David Attenborough and supported by the World Wildlife Fund—we work with storytellers who use their talents to build awareness around environmental issues, reaching millions of people around the world.’