A home cook has revealed how she recreated the famous honeycomb challenge from Netflix’s hugely popular series Squid Game.

During the series, the players were given a flat piece of honeycomb with an indented shape in the middle. They needed to separate the shape from the surrounding part of the candy without it cracking or breaking.

‘A lot of you asked how to make the candy from Squid Game. So here’s how to make it with some tips,’ Ayeh, from Sydney, said in the video. 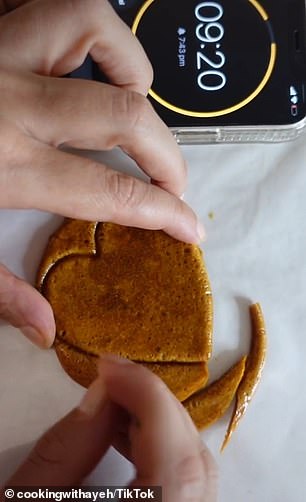 To get started, she simply poured white sugar into a hot pan.

‘Heat up a few tablespoons of sugar in a pan and once it’s all melted, add a pinch of baking soda,’ Ayeh said.

‘Keep stirring it quickly so it becomes all foamy, then pour it on baking paper.’

She then waited 20 seconds before she used a plate to flatten the candy.

‘Just make sure to oil the bottom so it doesn’t stick… Now make your shape with a cookie cutter,’ she said.

Once it’s ready, Ayeh said put your timer on to ‘start playing’.

‘Never has a show made me so anxious and sick every episode but I was addicted and now re-watching,’ she said, laughing. 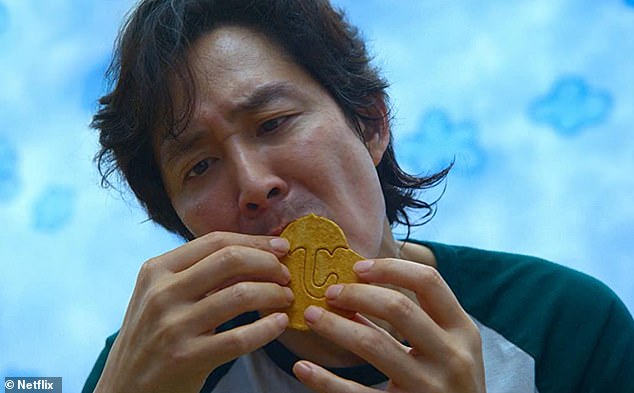 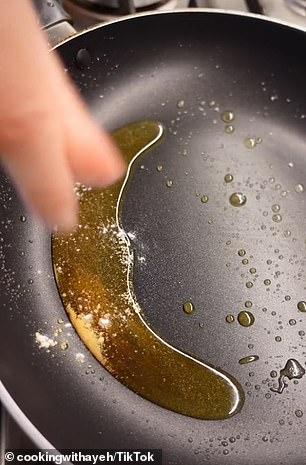 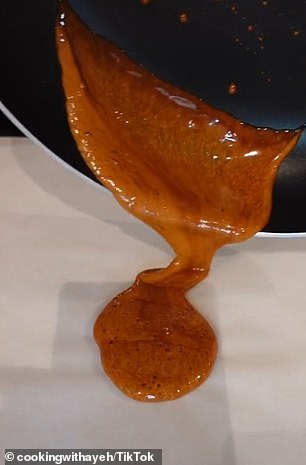 She shared a now-viral TikTok video showing exactly how she made the South Korean ‘Dalgona’ candy at home using two ingredients – sugar and baking soda. Once the sugar is melted, she poured the mixture onto a baking tray 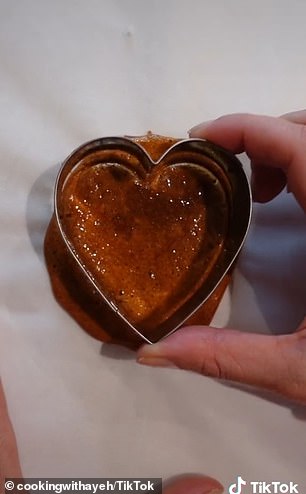 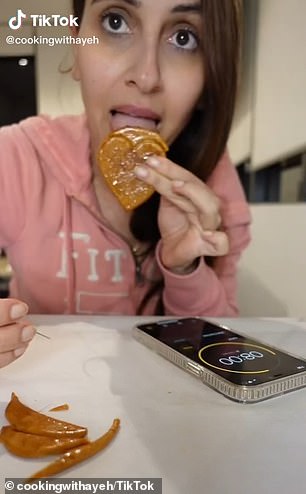 She waited 20 seconds before she used a plate to flatten the candy. She then made the shape using a heart-shape cookie cutter. Once it’s ready, Ayeh said put your timer on to ‘start playing’

The South Korean series has taken the world by storm in recent weeks, with the show on-track to become the most popular in the streaming service’s history.

Viewers watch 456 players participate in a series of children’s games to win an eye-popping prize – however there are deadly consequences for losers.

The second task in the series was the honeycomb challenge.

Jung Ho-yeon, who plays Sae-byeok, revealed the Dalgona candy was actually produced by an on-set honeycomb artist behind the scenes.

‘The film set smelt like honeycomb all day as there were real honeycomb objects as the director requested. So we brought a honeycomb master and he made objects whenever they were needed.

‘We were trying very hard to make the objects which can represent the feelings of the characters.’