Christmas chaos on the rails: Network Rail admits major works will be taking place on most routes over the festive period with closures kicking in from December 23

Rail passengers travelling over Christmas are set to endure festive misery with ‘major’ engineering works taking place on most routes over the festive period.

Commuters using the London terminals of Victoria, Paddington, Liverpool Street, Euston and St Pancras will all be disrupted – as well as those at Liverpool Lime Street.

Some 25,000 engineers are carrying out more than £148million of upgrades for Network Rail with some of the work beginning as early as Sunday, December 23.

All routes between Victoria and Clapham Junction will be closed over Christmas and New Year, London Paddington will suffer the same fate on December 23, 24 and 30.

The work at Paddington will see Heathrow Express services suspended on four days and Great Western Railway trains terminated at Slough or Reading.

Where are the major train works taking place this Christmas?

There will be a reduced service at London Euston and London St Pancras International, with buses set to replace trains between Bedford and Kettering.

Passengers will be unable to use the Gatwick Express from December 23 to January 1 – and, further north at Liverpool Lime Street, a reduced service will operate with many trains diverted.

As for Liverpool Street and Stratford in East London on the Greater Anglia line, a number of lines will be closed over the Christmas period.

Among the works will be the installation of an eight-mile overhead wire at Forest Gate on the Great Eastern Main Line as part of a £250million investment.

Structures to carry new overhead wire on the Southend Victoria line will also be put in place as part of a £46million investment to reduce hot weather delays.

And there will be work on the Felixstowe branch line as part of a £60million project to install a new one-mile loop near Trimley to increase freight traffic.

This will result in changes to services between Ingatestone and Liverpool Street on the main line, and between Billericay on the Southend Victoria line. 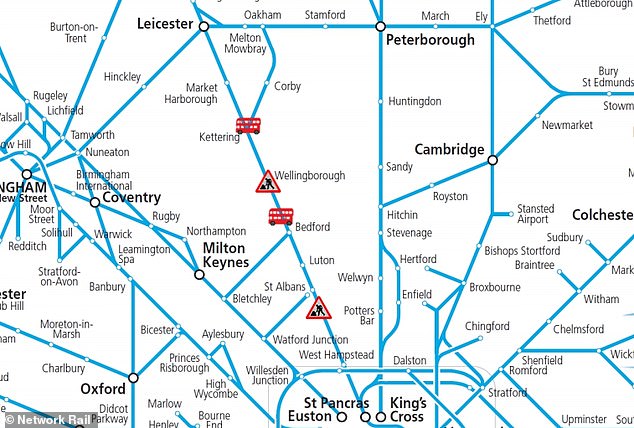 There will be a reduced service at London St Pancras, with buses set to replace some trains 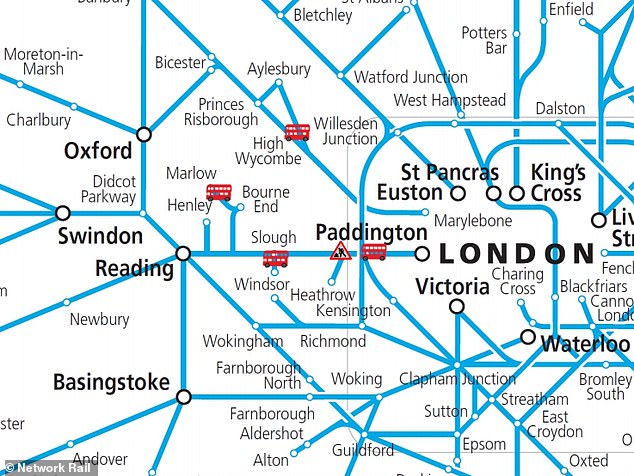 Works at London Paddington on December 23, 24 and 30 will see Heathrow Express services suspended on four days and Great Western Railway trains terminated at Slough or Reading 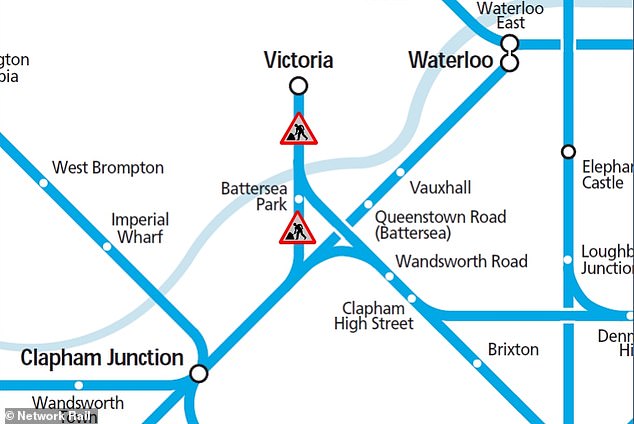 Greater Anglia managing director Jamie Burles said today: ‘We know customers would rather stay on the train all the way to their destination.

Charges to use toilets at three of northern England’s busiest railway stations will be scrapped next week.

The facilities at Leeds, Manchester Piccadilly and Liverpool Lime Street will be free to use from December 17.

Passengers are currently charged 40p to use the toilets at Leeds station, while Manchester Piccadilly and Liverpool Lime Street have 30p fees.

Network Rail, which owns the stations, said it will be the first improvement for passengers resulting from a £15million benefits package announced last week by Rail Minister Andrew Jones.

Mr Jones said the disruption suffered by passengers in the North has been ‘unacceptable’. Many Northern and TransPennine Express routes were crippled amid new timetables in May.

‘But I’d like to assure passengers that they will still be able to complete their journeys over the festive season, even if part of it is by bus.

‘We’re sorry that customers are inconvenienced by these works, but together with Network Rail, we’re working to transform the railway in East Anglia.’

Network Rail has already insisted there will be less overall disruption than last year because most of the engineering work has been scheduled for when no trains are planned to run, such as on Christmas Day and Boxing Day.

And National Rail said: ‘Fewer people travel by rail over the Christmas the New Year bank holiday period which is why rail companies decide to carry out essential improvement and engineering work across the rail network during this time.

‘Work consists of a 25,000-strong workforce who will carry out more than £148million of vital upgrades across Britain to provide a better service for customers.

‘This is why many train companies will also be making changes to their timetable and some train times to match services to the number of customers travelling.’