Tennis fans around the world are gathering this week in Queens, New York to watch the world’s best players gracefully execute impossible-looking shots.

Rafael Nadal, who is ranked number one in men’s singles and playing tonight in the second round of the competition, is one of the athletes people are most keen to watch.

The 31-year-old tennis star from Spain is widely regarded the greatest clay-court player in history, and has won an astounding 15 Grand Slam Titles.

Though he isn’t playing on clay, the prospect of watching his expertise in surveying his opponent and anticipating where the ball will go next has the world buzzing.

As millions from around the world tune in, there will be more than a few who think: ‘How on earth does he do that?’

Dr Rudy Behnia and Dr Thomas Jessell, neuroscientists at Columbia University explained how Nadal uses perception and reaction to create the perfect shot. He sees the ball coming towards him, then uses that image to create a motor plan in his brain, and then his brain sends that plan throughout his body to put it into action

Dr Behnia has done extensive research on visual processing, and Dr Jessell has spent the past 30 years researching how the nervous system controls muscles.

As an amateur tennis player herself, Dr Behnia said she loves when the Grand Slams come around so she can watch the interplay of perception and physical ability on the court.

Nadal has, of course, spent most of his life training intensively.

But like many other once-in-a-generation athletes – Michael Jordan, Simone Biles – the tennis star seems to possess an extra quality that allows him to predict the moves his opponent will make and elevates him above his competitors.

And after predicting the move his competitors make, he’s able to move his body to react in a split second to hit the perfect shot.

That action has to do with perception of the ball – how the eye sends a signal to the brain to tell it what it sees, the plan that is created with that image, and then how the plan is messaged throughout the body to tell the muscles how to move.

HOW TENNIS PROS LIKE RAFAEL NADAL TRAIN IN PERCEPTION

Tennis players are often better than the rest of us at time-related perceptual skills – such as speed discrimination.

In prior studies tennis players have been shown to perform more quickly and precisely in skills like anticipating the ball’s direction and speed than people who do not play the sport.

And in research, those skills are shown to usually be sport specific.

For example, tennis players are tested by reacting to videos of other expert players performing serves or ground strokes.

NeuroTracker is a videogame that is aimed at heightening those skills.

The game requires an individual to track spheres as they bounce around a 3D screen and attempts to heighten cognitive agility like the way dumbbells develop muscles.

The idea of the NeuroTracker is that it improves peripheral vision.

Users put on a pair of 3D glasses.

They then observe eight yellow balls in 3D projection against a black background (see above).

Half of the balls flash red, before all eight bounce around the screen again.

The user has to try to keep track of all eight balls while concentration on a tiny green dot in the middle of the screen.

SEEING THE BALL: HOW NADAL SEEMS TO HAVE AN UNUSUALLY STRONG CAPACITY TO LEARN VISUAL CUES AND ANALYZE A SITUATION

When Nadal is playing against his opponent it seems like he has the superhuman ability to perceive where the ball is at any time.

Dr Behnia explained that when Nadal sees the ball there are series of steps that seem to happen simultaneously so he can decide how to react.

Essentially, the brain does three jobs: extracting visual information from the world, storing that information, and deciding what to do with it to create the required action.

First, his opponent hits the ball and it comes his way, which his eyes see.

The light that’s seen sets of a certain sequence of photoreceptors, which are activated based on the motion that the ball does.

So if the ball is moving forward and spinning counter clockwise, a sequence of photoreceptors will be activated that reflects those movements.

The sequence then transforms the light photons into electrical signals that are sent to the brain.

Everyone is born with the same basic ability to perceive the world around them, but a player like Nadal has an unusual ability to process that information, Dr Behnia explained.

‘Someone like Nadal isn’t born with super-human perception,’ she said.

His real skill, she explains, is that he’s trained himself to focus his perception and analyze the ball as it moves in front of him. She makes clear that not everyone can do this.

‘Vision isn’t passive. His attention and focus, his ability to filter in and out what’s important in that moment… that’s what makes him so amazing,’ Dr Behnia added.

CREATING A MOTOR PLAN: HOW THE 31-YEAR-OLD STAR REACTS TO A PLAY WITHIN MILLISECONDS

Once eyes have used light particles to send an electrical signal to the brain, that signal is used to reconstruct an image of the world as Nadal sees it.

Nadal’s brain will receive images of the opponent diagonally across from him on the 78 foot long quart, of that person throwing the ball into the air before it is hit, and of the ball hurdling in his direction.

If fans are lucky enough to Nadal play his rival Roger Federer in the semi-finals, they will notice how the two athletes seem read each other’s minds – which is because of stored visual information the players have about each other.

Having played him before, Nadal will recognize Federer’s classic move of running to hit a return on a serve and be able to react quickly enough to strike it back to him.

After reconstructing the image of the court in front of him, Nadal’s brain brain then uses it to tell the rest of his body how to react.

Once the visual information is processed in the brain, it’s then sent to the motor cortex, Dr Jessell explained.

The motor cortex is what tells the rest of the body how to react to what the eye has just seen.

Dr Jessell explained that first, within the motor cortex cortical cells sense the information coming in and receive it.

Then, based on what the message says, those sells activate a set of neurons and create a motor plan.

Those neurons then take the motor plan and travel down the spinal cord, bringing message to different parts of the body.

Nadal has just milliseconds to detect the height and direction it was hit, the spin that was put on it, and whether he will need to move left, right, forward or backward to whack the ball – and because of his tuned perceptive skills, is able to do so nearly every time. 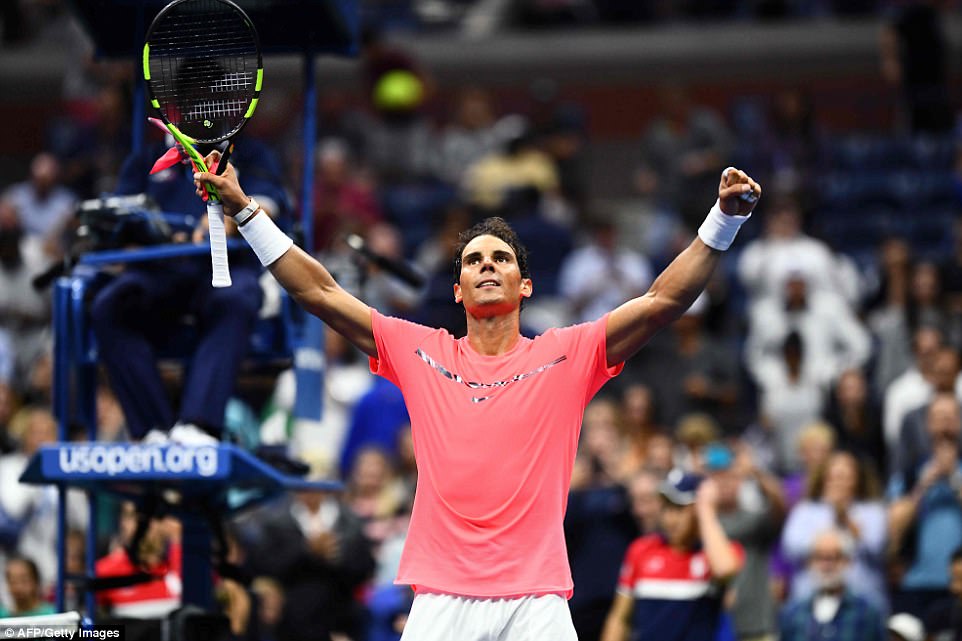 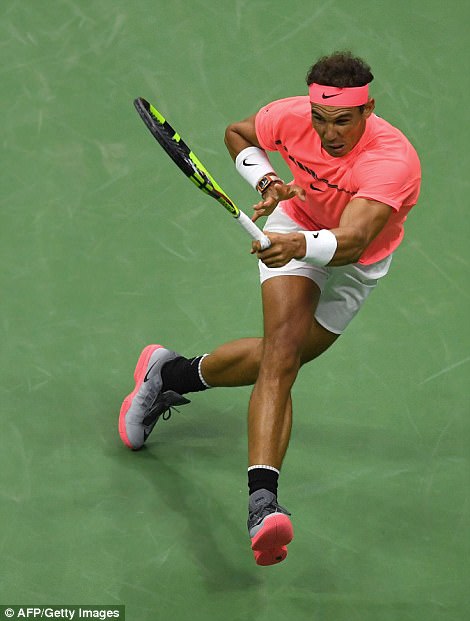 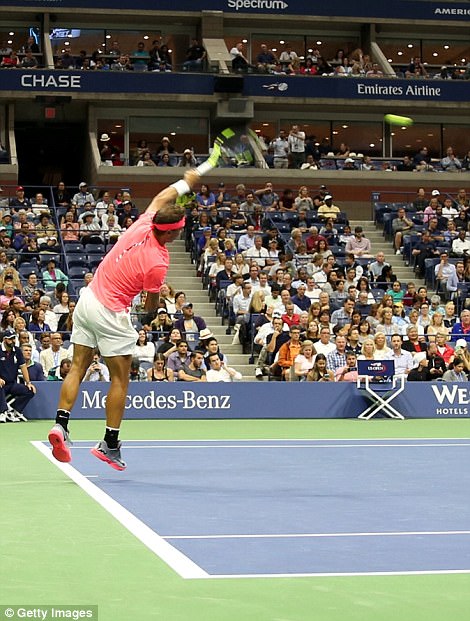 And after predicting the move his competitors make, he’s able to move his body to react in a split second to hit the perfect shot. That action has to do with perception of the ball – how the eye sends a signal to the brain to tell it what it sees, the plan that is created with that image, and then how the plan is messaged throughout the body to tell the muscles how to move

PUTTING IT INTO ACTION: FROM BASELINE STROKES TO POWERFUL SPINS – HOW RAFA USES ALL THIS INFORMATION TO TRIUMPH OVER HIS OPPONENTS

Once the plan is created it is taken down the spine and to the motor neurons, which are the last in the nervous system to make contact with the muscle.

As soon as the plan reaches the motor neurons, a signal is sent to tell his muscles how to contract to create a specific movement. How that precise mechanism happens, Dr Jessell explained, isn’t fully understood.

For each muscle, there are about 300 to 400 motor neurons that innovate it to move. Each of those motor neurons receive about 25 inputs from the brain. In a recent study, Dr Jessell found that there are as many as 200 classes of nerve cells that influence movement.

And understanding every single one of these cells and neurons counts is crucial to understanding why one body is different to another.

The muscle contraction is what we see when Nadal pulls back his arm and lunges forward to take the perfect shot.

In practice, he has mere seconds from when his opponent raises his arm to prepare for a serve to the moment the ball will touch his racket so he can return it.

‘But it is clear that some people are good at learning movements, and others are not.

‘Athletes are born with an ability to learn movement that other people don’t have, and we don’t know why that is.’

Nadal, who is known for his quick and graceful baseline strokes and powerful spins, will have trained so intensely that the few seconds he has to make a play will look like reflex.