A high school is under investigation by a Nevada school district after video showed a student dragging a black mannequin across the ground during a homecoming football game halftime parade.

The incident occurred on Friday night in Reno between Damonte Ranch High School and McQueen High School around 9.30pm.

In a video shared by KRNV, a student from Damonte Ranch High School can be seen dressed as a cowboy riding a mustang, the school’s mascot, while using a lasso to drag a black mannequin dressed as a lancer by the waist.

On Friday night during a homecoming football game, a student was seen dragging a black mannequin by a lasso during a halftime parade (pictured)

In a statement, McNeill said: ‘This incident and the behavior of those responsible is utterly inconsistent with our collective commitment to equity, diversity, responsibility, and kindness for all of our students and staff members.’

‘The District is continuing the investigation into how this most unfortunate incident occurred, and will take appropriate action to ensure it never happens again.’

‘We will hold those responsible accountable for their actions. This may in fact entail— in addition to apologies— a school-wide redoubling of efforts around civil rights, equity, and diversity training.’ 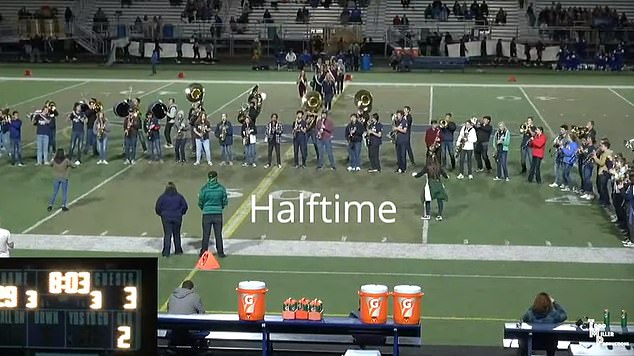 According to the incident report provided by Reno Gazette Journal, students chose to build a homecoming float centered around a rodeo theme.

Class advisors approved students purchasing a ‘blowup cowboy/horse’ and a lasso to tie around a student dressed as a lancer – McQueen’s mascot – for the float.

It was later decided students would purchase a blow up mannequin instead of using a student.

Students attempted to purchase a grey mannequin on Amazon, but bought a black one when that was the only color available.

Students were unable to keep the mannequin standing once on the float and that’s what led to the mannequin being dragged by a lasso tied around the waist.

‘On behalf of our Damonte Ranch staff and students, we are extremely apologetic and by no way was our intent to ever offend anyone but rather demonstrate a traditional, friendly rivalry,’ Damonte Ranch High School officials said in the report.

‘We completely understand how this was perceived and how this could be offensive to anyone in attendance at the game.’

‘We would never intentionally try to offend any culture as we represent diverse cultures in our Damonte Ranch High School and community.’

‘Again, we are deeply sorry and will take action and necessary steps to ensure that this never repeats itself at Damonte Ranch High School.’

The investigation is still being reviewed.