The father of slain teen cowgirl Gabrielle ‘Britney’ Ujlaky has testified against his daughter’s accused killer in a preliminary hearing in Nevada.

James Ujlaky took to the stand at Elko Justice Court Tuesday recalling the final time he saw his 16-year-old daughter before she was allegedly raped and murdered by Bryce Dickey on March 8.

James told the court that he and Britney had attended a band rehearsal together, before she left with Dickey, a longtime friend who had offered to drive her home.

Britney told her father that she would ‘beat him home’, but James became anxious when he returned to the house several hours later and discovered that she was not there.

‘I was repeatedly calling her and I sent a text, ‘Why aren’t you answering my calls?’” James stated, according to Elko Daily.

Police allege that, at the time, Britney was being raped, suffocated and stabbed to death by Hickey – whom she had known for many years.

Britney’s partially clothed body was discovered on a remote desert road on March 11, three days after she was last seen alive.

A used condom was found at the scene, which eventually tied Hickey to the crime. 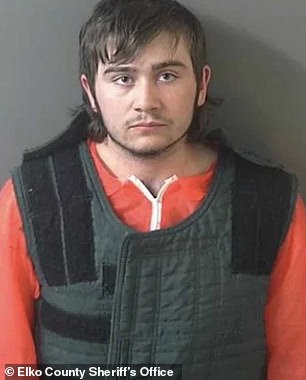 Nevada cowgirl Gabrielle ‘Britney’ Ujlaky, 16, was sexually assaulted and murdered on March 8. Her longtime friend Bryce Dickey, 18, has been charged with murder and is now facing the death penalty 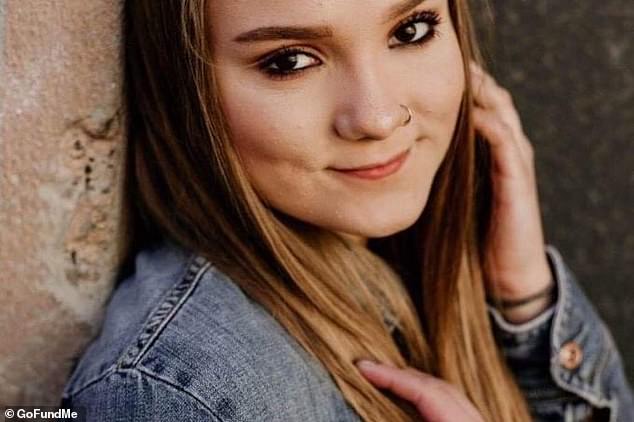 Ujlaky (pictured) was last seen by her father driving off with Dickey on the afternoon of March 8. Her father testified at a preliminary hearing against Dickey on Tuesday

Britney Ujlaky was last seen with Dickey on the afternoon of March 8, who had offered to give her a ride home.

However, Dickey told police he instead dropped off her at Spring Creek High School and saw her get into a green F-150 Ford pickup truck with a ‘pretty tall’ white male wearing a cowboy hat. 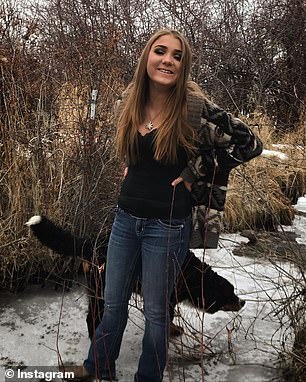 ‘Britney was this smart girl that everyone liked. She had high morals as far as I knew, she was still a virgin to the best of my knowledge,’ a friend told DailyMail.com

Elko police then filed a missing person/runaway report on March 9th requesting information about a green F-150 truck, even setting up a tip line.

The green truck later turned out to be a fabrication,that Dickey used as an attempt to mislead investigators.

In subsequent interviews Dickey told police that he had driven around with Ujlaky for about three and a half hours before taking he to Spring Creek High School. He also showed them Snapchat text messages he had to sent to Ujlaky asking if she was OK and where she was at.

According to the probable cause statement, police say, on March 11 a deceased female was found that was partially covered by a tarp and was partially clothed. ‘Blood was found near the edge of the roadway with a trail of disturbed earth leading to the body.’

After Ujlaky’s body was positively identified on March 13, Dickey was again interviewed at the police station, where detectives notated that some of his statements contradicted earlier statements.

During this interview Dickey described the clothing that Ujlaky was wearing at the time he was with her which matched the clothing she was wearing on her body and confirmed she was in possession of a cell phone and lanyard of keys.

Dickey agreed to voluntarily sign a consent form and provided a DNA sample.

Police went back out to the crime scene again on March 14 where a set of earbuds and a used condom were found. DNA on the condom later tested positive for both Dickey and Ujlaky. 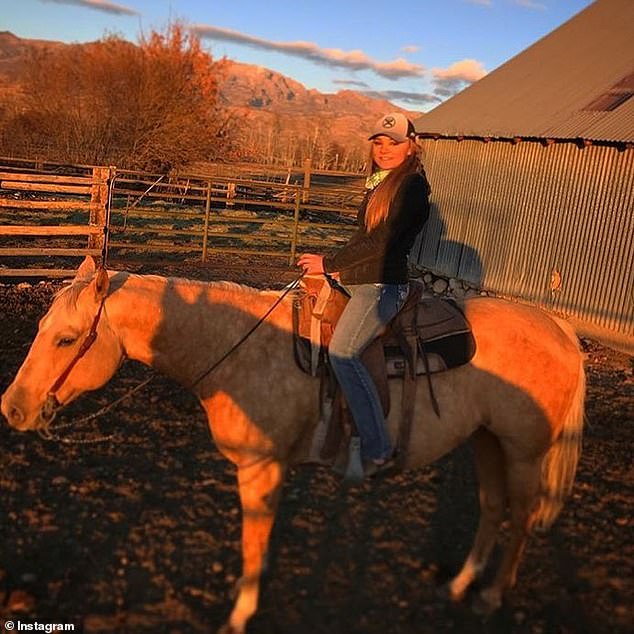 A condom wrapper was found at the crime scene, as well as keys on a lanyard with the name ‘Britney’ on it and they were used to track down Dickey 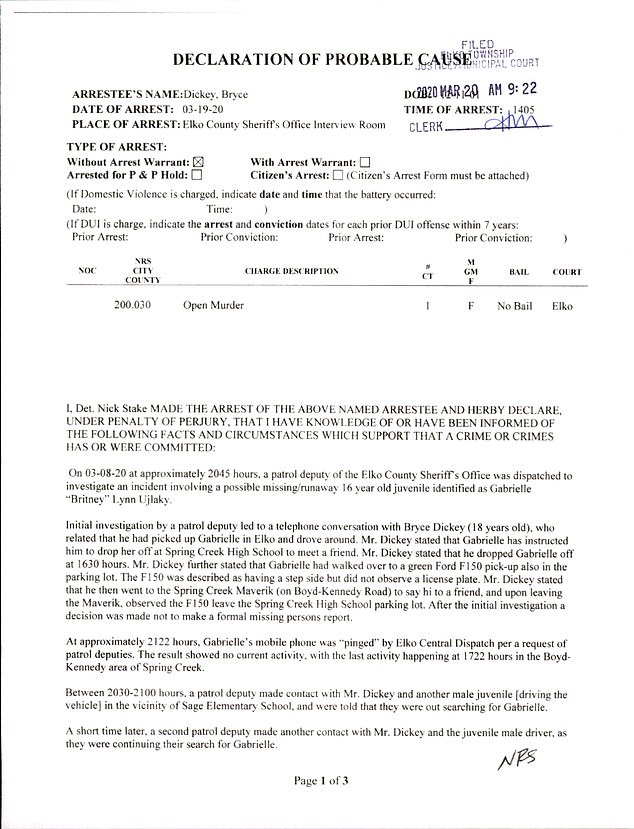 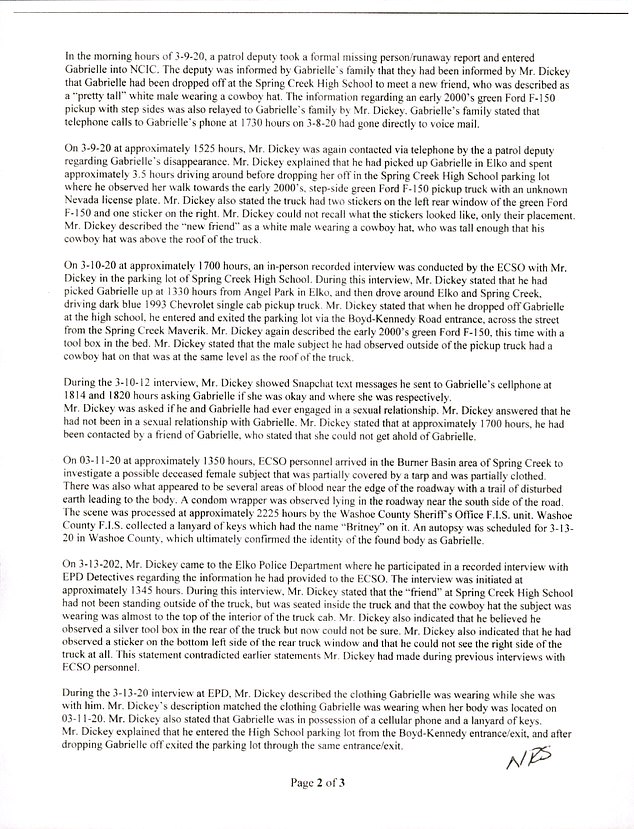 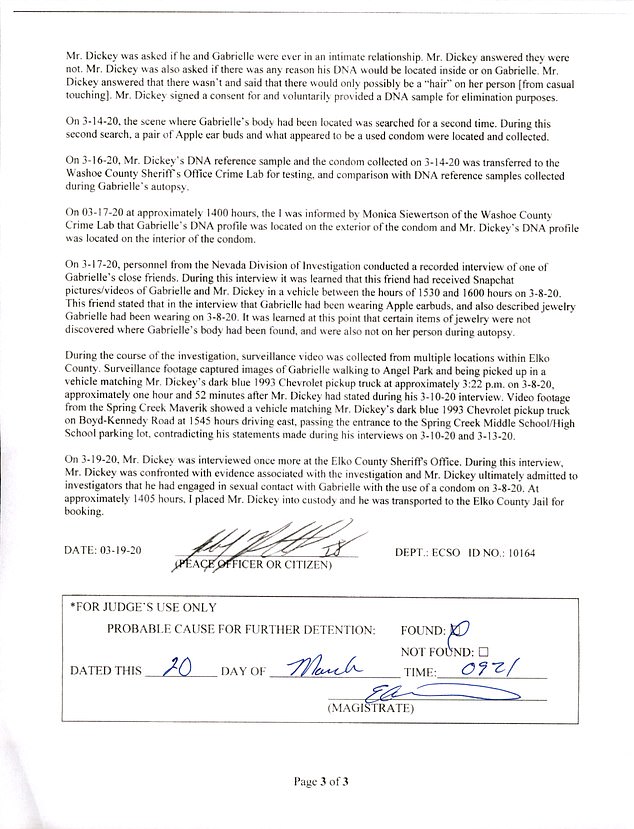 According to a probable cause statement obtained by DailyMail.com, a used condom found at the crime scene was used to track down Dickey

Days earlier Dickey denied to police of ever having a sexual relationship with Britney but in a police interview on March 19 when confronted with evidence, he confessed to having sex with her on March 8 with a condom.

Dickey was arrested and search warrants were served on residencies associated with him. Blood was found on a pair of boots and a sweatshirt.

Travis Johnston, 17, of Spring Creek, Nevada and a childhood friend of Dickey’s, exclusively told Dailymail.com, ‘I’m still in shock over this, I can’t believe it.’

Johnston said they all knew each other, ‘We come from a small town, everyone knows everyone, Bryce was the type of friend that would give you the shirt off his back. He was as mellow as anyone I’ve ever met. I just can’t believe he killed Britney; he was like her big brother. He never said anything sexual in nature about Britney.

‘Britney was this smart girl that everyone liked. She had high morals as far as I knew, she was still a virgin to the best of my knowledge.’

The night Ujlaky went missing on March 8, Johnston said that Dickey called him around 9pm and told him that Ujlaky had been reported missing and wanted to know if he wanted to go out looking for her in the Burner Basin area.

‘I told Bryce I couldn’t go with him that night because I already had plans,’ but now wonders why Bryce wanted to specifically look in the area where her body was found just days later.

Over the course of the next few days Johnston said Dickey didn’t have a lot to say about Britney. ‘I asked him if he spoke with the police since he was one of the last people to see her the day she disappeared and he told me, ‘Yeah I’ve spoken to the police on several occasions and they are all up in my a**.’

Johnston added the day Dickey was arrested the police pulled a rouse on him, ‘The police told Bryce to come down to the station so they can discuss some new information with him about the green truck, so as Bryce drove into the Elko County Sheriff’s office he was arrested.’

Johnston said he’s still not convinced of his friend who he has known since kindergarten’s guilt, ‘I want to see more evidence linking him to the murder.’

But then added, ‘I guess you really never know someone and what they are capable of.’ 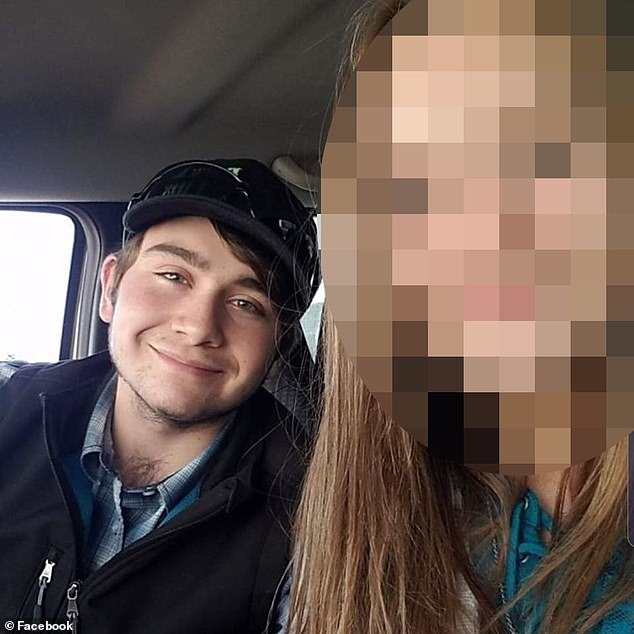 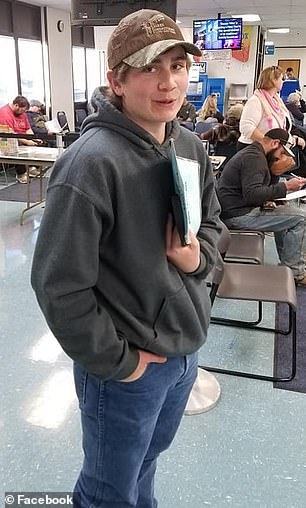 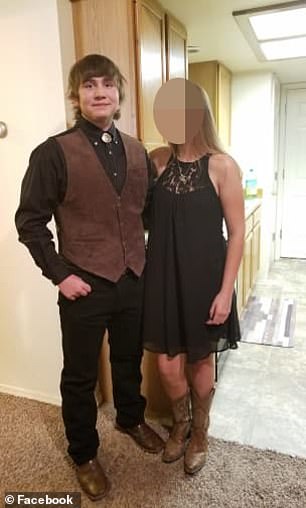 Britney’s body was found partially covered by a tarp and was partially clothed. ‘Blood was found near the edge of the roadway with a trail of disturbed earth leading to the body,’ the probably cause statement read

Johnston says he still hasn’t spoken to the police about his interaction with Dickey.

Another friend of both Britney and Bryce’s, Cameron Rand, 19, Elko, Nevada told Dailymail.com,

‘The Bryce I knew would have never done this to anyone let alone Britney. But if he did it, the law is the law and he’ll need to pay for what he did.’

Ujalky’s mother, Alisha Ujlaky told Oxygen.com, ‘I’m really, really numb, we are hanging in there by the fingernails.’

‘I trusted him impeccably,’ she added. ‘The betrayal in this is unreal.’

She said she bought Dickey’s story about the green Ford pickup, ‘hook, line, and sinker.’

She even consoled Dickey at a balloon launch memorial for her daughter just days before his arrest.

‘I grabbed his cheeks and I tilted him towards me so he was looking in my eyes, for somebody who can sit there and betray a best friend like that, take her life, then go and celebrate her life with her family, go out looking for her — he is a psychopath.’

Ujlaky’s father, James Ujlaky, said he trusted Dickey, and that the two had been friends for years through the rodeo community.

‘There’s no worse betrayal than this,’ James told The Daily Beast. ‘Because she really thought he was a good friend.’

‘She did trust everybody. She always saw the good. If someone did wrong, she would call you out in front of everybody. She was going to expose you for who you were, come hell or high water.’ 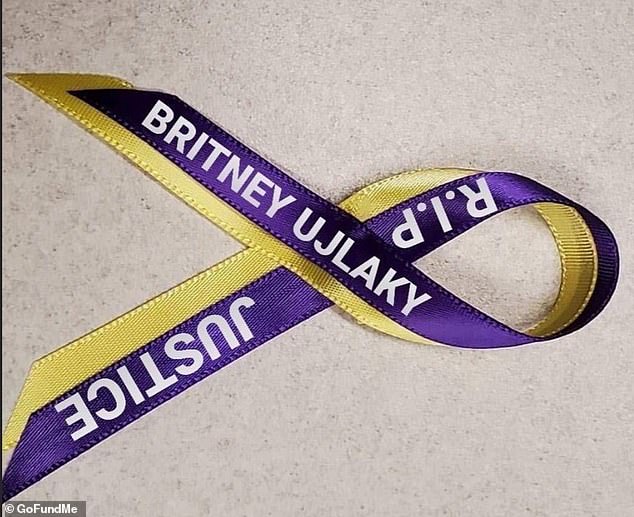 A ribbon reads: ‘Justice for Britney Ujlaky’ after her body was found 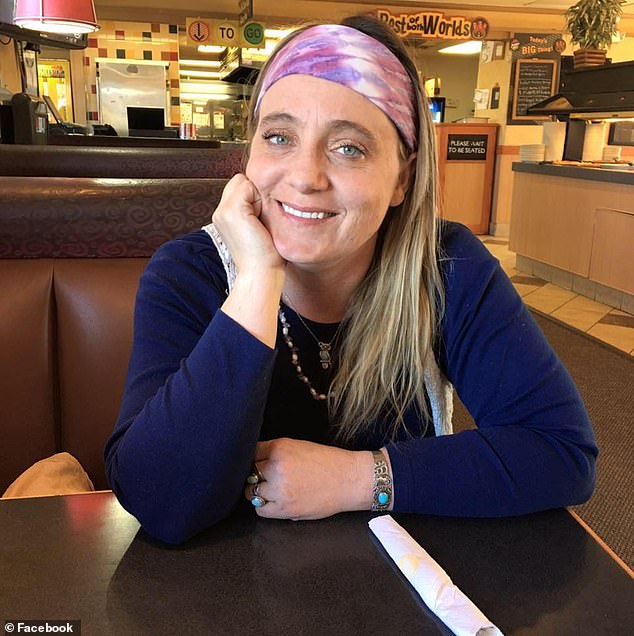 Ujalky’s mother, Alisha Ujlaky told Oxygen.com, ‘I’m really, really numb, we are hanging in there by the fingernails’

On the day Ujlaky’s body was found, March 11 Dickey posted a link to a Go Fund Me page on his Facebook in honor of Britney Ujlaky then again on March 13 he posted again about Britney

‘Yesterday, we all received news that made us hit the floor. Around 8 in the morning we all started meeting up at my house to grieve an to mourn Britney’s life. Which was taken far too soon. That day I had tears of pain and joy. I wish she could have seen the amount of us that came together to honor you sis. We love you so much. Just know you won’t ever be forgotten.’

Friends of Ujlaky’s have started to speak out against Dickey without mentioning his now on social media. Britney’s good friend Cheyenne Fry wrote,

‘I misss you sooooo freaking much brit. You didn’t deserve any of the things that happened to you. I miss your laugh and your voice so much I think about you all the time and how I wanna send you all the funny TikToks that we used to laugh at the most I miss seeing you everyday I want you back I want my best friend back!!

‘The coward that took you away from me is going to pay and I will make sure that i do all the things we had planned on doing together. You were more than my best friend you were my little sister and I love you so much I really could use one of your hugs right now’.

Dickey is currently being held at the Elko County Jail without bail.