Never throw leftover food away again: These tips show how everything can be put to good use

As supermarkets such as Tesco plan to ditch ‘use by’ dates on many products, and pressure grows to stop wasting food, follow our A-Z to find out how you can cut down on waste, slash shopping bills and make your groceries go further.

A is for Avocados after sun

Just rub the inside of the skin over any areas of sunburn. Leave the avocado on for an hour or so before rinsing away with lukewarm water.

A recent study revealed that British households now throw away five million tonnes of good food a year. Here, FEMAIL reveals how you can make your groceries go further

B is for bring stale bread back from the brink

Bread is the most wasted food product in the UK, surveys show. But stale crusty bread can be revived by running it under the cold tap, then popping it in a hot oven — around 180c — for six to 12 minutes. The heat and steam turns starch in the crust into a gel, which dries to a glossy, crisp crust. The stale interior will also release moisture, for a softer texture.

C is for cook up a compote

Cupboards full of rock-hard dried fruit? It’s the perfect base for a compote, says cookery writer Danielle Svetcov. Chop fruit into a saucepan, then cover with water. Add orange peel, a tablespoon of sherry, and simmer for 20 minutes, until syrupy. Store in the fridge and use within two weeks.

D is for disinfect your chopping board with old lemons

Use old lemons to clean and disinfect chopping boards. Sprinkle the surface of the board with a little salt, then rub firmly with the cut side of half a lemon to remove stains. The citric acid has a bleaching effect and will also banish lingering smells.

If your eggs are nearing their best-before date, freeze them! Egg expands when frozen, so to avoid burst shells, break your eggs, beat them and freeze in a sealed container. They can stay in there for up to six months.

You can freeze yolks or whites separately in the same way. The Oxo Good Grips 3-in-1 Egg Separator (£5, from johnlewis.com) will help you do this neatly. When freezing the yolks, mix in half a teaspoon of salt per 240ml raw egg yolk to stop it turning into an inedible gel during the freezing process. F is for freeze your fromage

If soft cheeses develop mould, throw them out — harmful bacteria could be growing. But hard cheeses such as cheddar or red Leicester can be rescued. Just trim off the mould, then grate the rest to add to food.

You can also freeze hard cheeses for up to six months — although they’ll be crumbly after defrosting, so will be best used in cooking.

G is for get crunchier biscuits

Rejuvenate your biscuits and crisps by spreading them on a baking sheet and giving them five minutes in a 180c oven. This removes humidity and restores the cr

H is for home-made oil

Fresh herbs can be expensive, so put leftovers to good use. Flavoured oils can be used in salads, to dip bread in, or to cook with. Chop the herbs, drop them in 200ml bland vegetable oil and gently warm on the stove for five minutes. Once the oil has cooled, sieve out the herbs, bottle and keep in the fridge for up to two months. 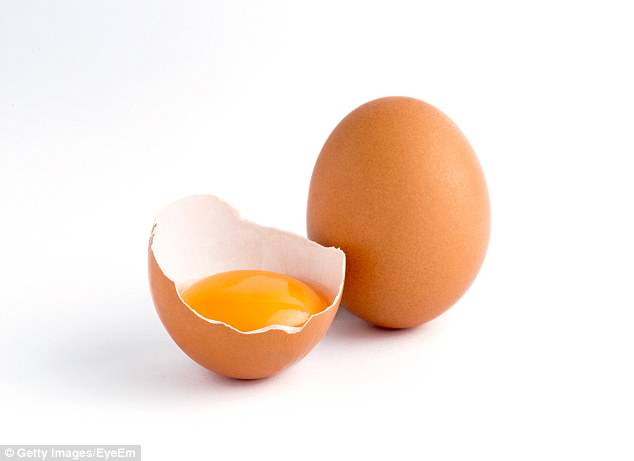 Eggs’ shelf life (pictured) can be extended by freezing them, they can stay that way for six months

I is for iceberg smoothie anyone?

Iceberg lettuce may taste bland, but its mild flavour and long shelf life makes it a very versatile ingredient. Ninety-six per cent water, and low in sugars and calories, wilting leaves are ideal for hydrating smoothies. Old lettuce can also be turned into soup by chopping it up, adding a few handfuls of frozen peas, onion, garlic and chicken stock, simmering for ten minutes and blending.

J is for jam jar marinade

Do you have a larder filled with jars with tiny bits of jam in the bottom? Use them to create a marinade. Add an equal quantity of balsamic vinegar to any berry jam, finely chopped garlic, then shake to create a marinade for steak. Add apple cider vinegar and cardamom to apricot jam for pork. K is for kale conditioner

Blend four past-their-best, washed kale leaves, the juice of a lemon and a teaspoon of olive oil into a paste.

Rub into the scalp and leave for 20 minutes.

L is for leftover lollipops

Exotic fruits that are fiddly to prepare, such as mango and pineapple, often end up rotting in the bowl. If you have fruit that’s a little past its best, puree in a blender and freeze the pulp in lollipop moulds to make snacks for kids. Also works with peaches and apricots. 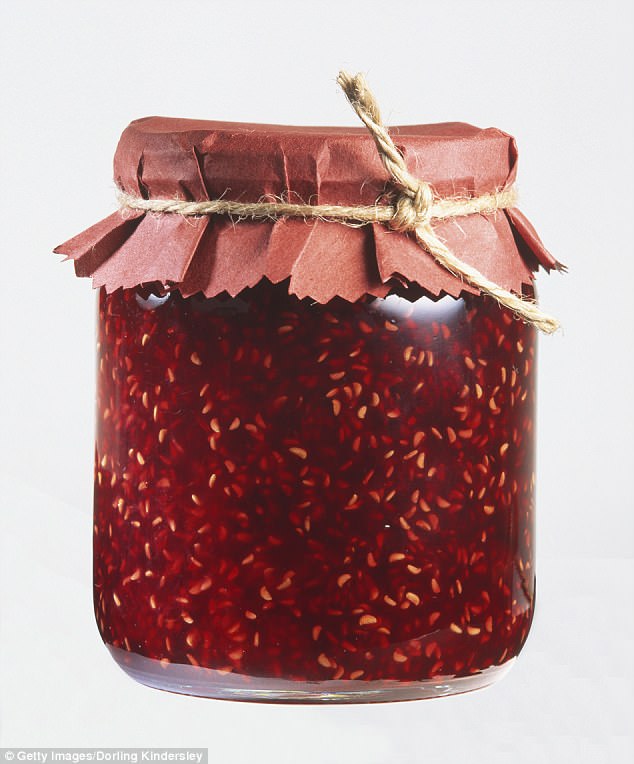 If your jam jars have bits of jam at the bottom, you can add an equal quantity of balsamic vinegar, finely chopped garlic, and then shake to create a marinade for steak

M is for make a white whine syrup

You can freeze vinegary leftover wine in cubes and use it enhance your cooking — or turn it into a syrup. Stir one part sugar into three parts wine, add a cinnamon stick, star anise or vanilla pod, and simmer until reduced by two-thirds. Pour over ice cream and stewed fruit, or add to marinades or salad dressing.

N is for no more dirty marks

Stale white bread has a multitude of uses. Scrunch a slice into a ball and use it to buff away scuffs, dirty marks and fingerprints on painted walls and wallpaper. You can also use a slice to mop up fine shards of broken glass — just wipe over to pick it up. O is for over-ripe apples

We throw away 4.4 million apples a day in the UK — but instead of chucking bruised apples, cut up and pop a slice in your cake tin. The moisture will prevent baked goods from going stale.

P is for pep-up potatoes

We bin nearly half of the potatoes we buy. To extend their shelf life, store them in a breathable potato bag with blackout lining, such as the Potato Preserving Bag (£4.59, from lakeland. co.uk). Potatoes also freeze well if they are blanched in boiling water.

Q is for quinoa brownies R is for roast your grapes

Toss past-their-best, wrinkly grapes in olive oil, salt and pepper and roast for 20-30 minutes until sugars caramelise and skins blister. Roasted grapes — served hot or cold — will make a great accompaniment for cold meats, and can also be served with salads, cheese or poured over vanilla ice cream.

S is for sour milk shells

If milk is sour but not curdled (once milk starts to separate and curdle it needs to be poured away) you can still use it. Milk turns sour when the harmless bacteria found in dairy products start to convert natural sugars into lactic acid. Used instead of fresh milk in scones or pancakes, the acid in sour milk reacts with the raising agents in these recipes to produce large amounts of carbon dioxide and a fluffy rise. 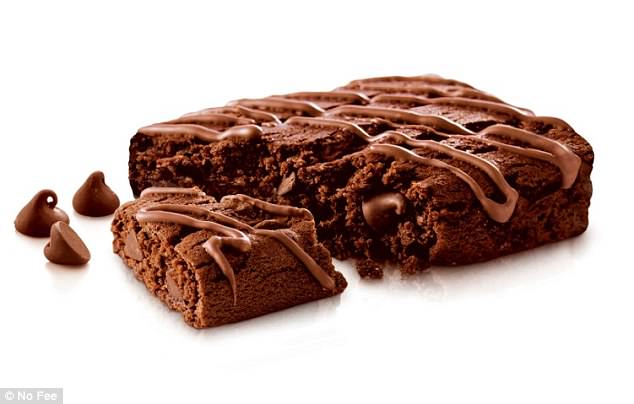 According to cookery writer Gunjan Dudani, leftover quinoa can be used to make brownies

T is for tomato polish

The citric acid in your dried up tomato ketchup or week-old leftover tomato pasta sauce will eat through dirt and tarnish on copper pots and pans. Just apply the tomato paste with a cloth, and scrub until the shine is restored.

U is for umami paste

Leftovers with strong flavours such as parmesan rind, old anchovies or dried-up garlic can be rescued by combining them to make an ‘umami’ paste. This has lots of potential uses — stir a teaspoon into bolognese sauce, stew or an oriental dish for a rich flavour.

Blend one tablespoon each of tomato paste, anchovy paste and soy sauce with two tablespoons each of grated parmesan rind and olive oil, a couple of minced garlic cloves, a handful of mushrooms and a dash of chilli. 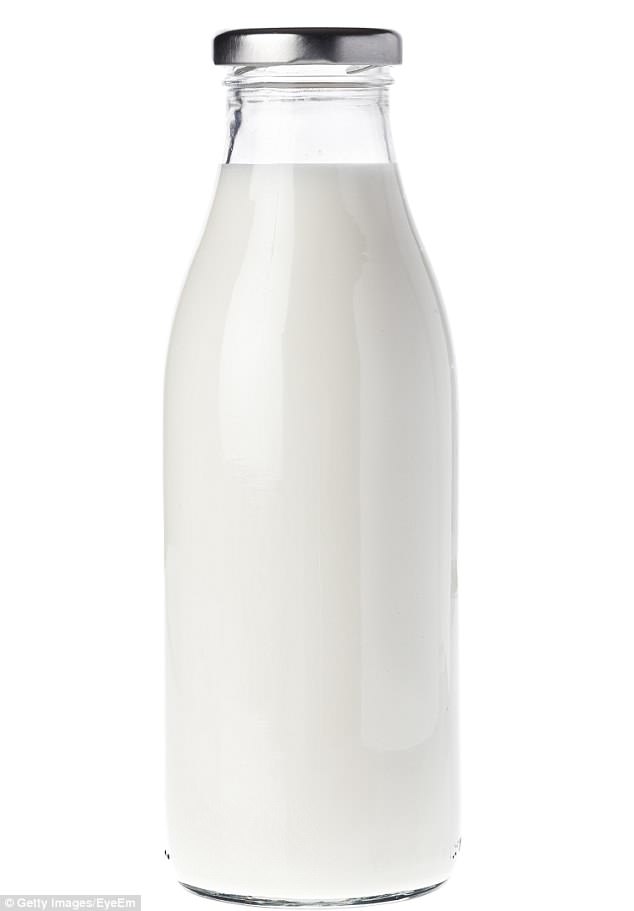 V is for veggie peel fritters

When you peel vegetables, you’re removing the most nutritious part.

Try making fritters. Carrot, parsnip, sweet potato and courgette peelings, and sliced cauliflower or broccoli stalks, work well. Mix with a beaten egg, a tablespoon of flour, minced garlic clove, a teaspoon of mixed herbs, and a handful of parmesan. Fry spoonfuls of mixture in hot oil until both sides are crispy.

W is for walnuts to revive furniture

Treat scratches on wooden furniture by snapping an old walnut kernel in half, and firmly rubbing the exposed edge of the nut over the mark. The oil from the nut should fade the scratch.

The flavour of any stale nuts can be refreshed by giving them a quick blast in the microwave for 60 to 90 seconds.

X is for x-tra sharp blades

Past-its-best uncooked rice can be really handy. Pouring half a cup into your blender and blitzing it for a minute will sharpen the blades. To remove limescale and tide marks from an awkward-shaped glass vase, add a handful of dry rice to soapy water and swill around.

Y is for youthful skin with yoghurt

Got a spare pot of ancient yoghurt sitting at the back of your fridge? For radiant skin, try applying a natural yoghurt masque. Paint the yoghurt over the skin and leave to set for 20 minutes before rinsing with cool water. The combination of lactic acid and fats in the yoghurt will help to loosen flaky skin cells and soften fine lines.

Z is for zesty fire lighters

Got a spare pot of ancient yoghurt sitting at the back of your fridge? For radiant skin, try applying a natural yoghurt masque. Paint the yoghurt over the skin and leave to set for 20 minutes before rinsing with cool water. The combination of lactic acid and fats in the yoghurt will help to loosen flaky skin cells and soften fine lines.