New £10 note released this week – what you need to know

The new polymer £10 note featuring Jane Austen is due to be released this week -and some could be worth thousands.

The release will see a repeat of the scramble to find currency with the coveted ‘AA’ serial number.

When the £5 polymer notes were put into general circulation earlier this year a lucky few cashed in – making thousands of pounds because of the rarity of their fivers.

The new currency is plastic, difficult to tear and can survive being put through the washing machine and other spills.

Adapting bank cash machines, rail ticket machines, self-service tills and other vending machines to cope with them is costing up to £236million, say consultants CMS Payment.

Not all machines are ready to take the new notes, which have extra security features, making them harder to counterfeit.

These include a see-through window framing the Queen’s portrait and Big Ben in gold foil on the front and in silver on the back.

Because they are plastic, the notes are difficult to tear and can survive being put through the washing machine and other spills 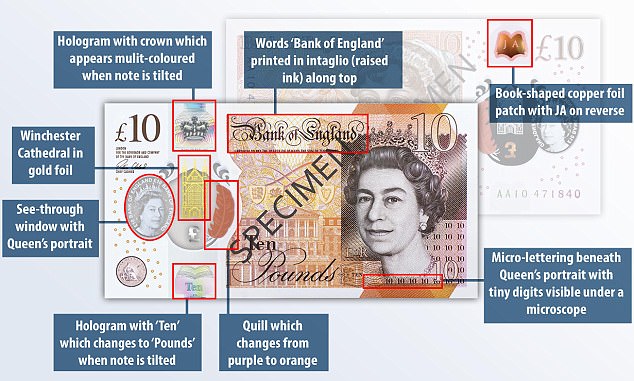 To help the blind and vision-impaired distinguish between denominations, new £10 and £20 notes will have tactile features created by a series of raised dots.

The note will be distinguishable by not having raised dots. The denominations will still be different sizes and have a similar colour scheme to existing notes.

More than 30 countries already use plastic banknotes. Australia was the first to launch them in 1988, followed by countries including New Zealand and Singapore.

Scotland has had polymer notes since March, when two mmillion were released by the Clydesdale Bank. 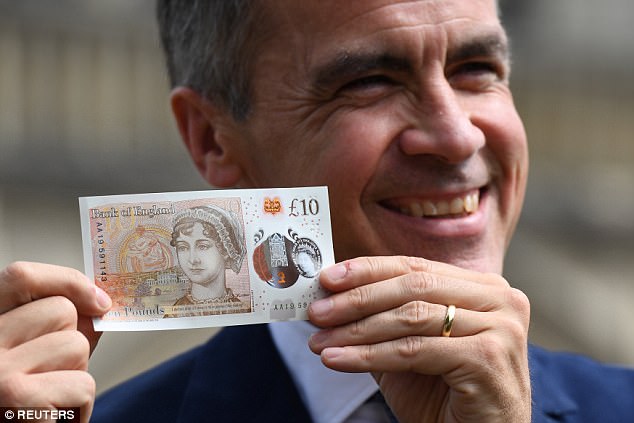 Not all machines are ready to take the new notes, which have extra security features, making them harder to counterfeit. Bank of England governor Mark Carney is pictured with the currency 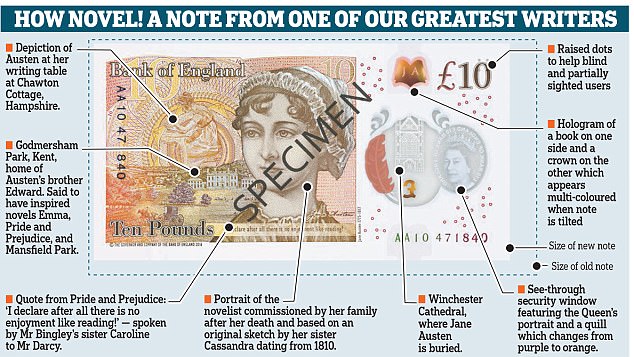 Legal tender status of the paper £10 featuring Charles Darwin will eventually be withdrawn in Spring 2018. The exact date will be announced at least three months in advance.

Security features on the new £10 note

Like the £5 note already in circulation featuring Sir Winston Churchill, the new £10 banknote is made from polymer.

It is expected to last at least two-and-a-half times longer than the current paper £10 notes – around five years in total – and stay in better condition during day-to-day use.

The transition to polymer has sparked controversy after the Bank confirmed that an ‘extremely small amount’ of tallow – or animal fat – was used to produce polymer pellets, which were part of the production process for creating the notes.

Activists and religious groups have been pushing for sustainable, plant-based alternatives and have accused the central bank of forcing unethical products on the public.

The note will be the only one in circulation to feature a woman, aside from the Queen, following the replacement of the old £5 note which featured prison reformer Elizabeth Fry, with the polymer version featuring Sir Winston Churchill.

But the note has caused anger over what is claimed to be a misleading quote from Pride and Prejudice character Caroline Bingley – an antagonist in the famous novel.

The words ‘I declare after all there is no enjoyment but reading!’ feature underneath a portrait of Austen, commissioned by her family. 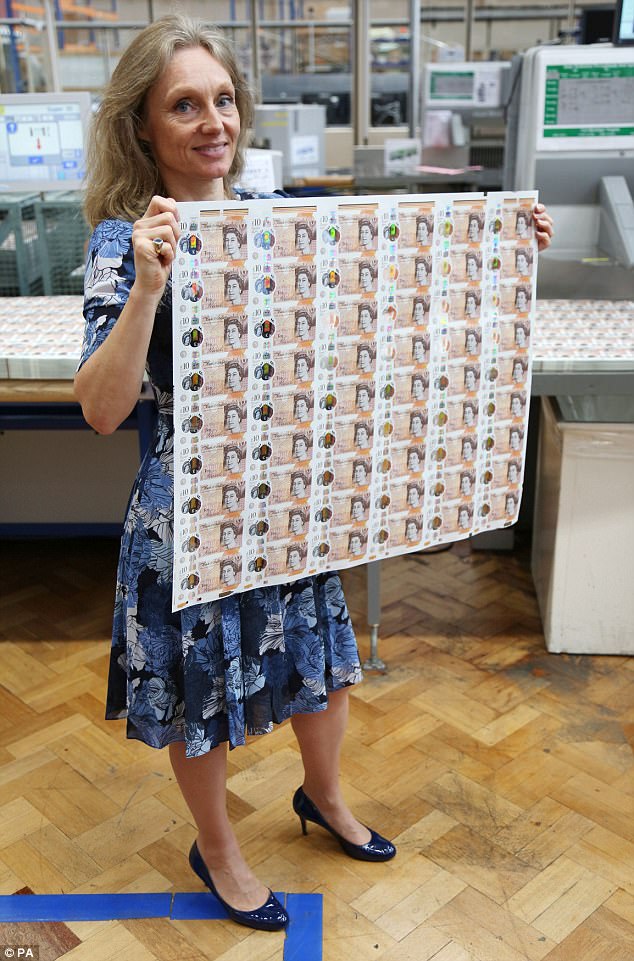 But Twitter users criticised the decision to use a quote from a ‘detestable character’ who has no real interest in reading and only said it to attract attention from Mark Darcy – the book’s heart-throb and eventual husband of protagonist Elizabeth Bennet.

How Austen’s character is ‘misquoted’ on note

The words ‘I declare after all there is no enjoyment like reading!’ are spoken by Caroline Bingley, a deceitful character who has no interest in books.

She says the words as she speaks to Mr Darcy, whom she wants as a husband, and pretends to read a book so she can appear to share his interests.

She is also a detested character due to her snobby nature, particularly towards the Bennet family.

Despite originally being friends with Jane, she later snubs her after realising her brother, Charles, developed feelings for her.

Miss Bingley also is openly rude to Elizabeth at a dinner party, but is later forced to accept her after Mr Darcy and Elizabeth get engaged.

Austen writes in the 1813 book that she is ‘as much engaged in watching Mr Darcy’s progress through his book, as in reading her own’.

Carney responded to the criticism by saying today: ‘It’s two things; it captures much of her spirit, that is the quote, you can read it straight, there is no enjoyment like reading, and we agree with that.

‘If you know her work, you can enjoy the irony of that, it draws out some of the aspects of her social satire, it works on many levels.’

Alice Banks wrote on the micro-blogging website: ‘Whoever made the decision for the Jane Austen quote on the new £10 note has clearly never read Pride & Prejudice.’

Teresa Warner, who describes herself as a ‘Jane Austen addict’, wrote: ‘You know what’s a great idea, using a Caroline Bingley quote to celebrate Jane Austen” – said no one ever.’

Omar Moore agreed, and wrote: ‘Dear @bankofengland, why disrespect Jane Austen with a quote from a detestable character who despised reading? In poor taste. #janeausten200.’

However, some people suggested the use of the quote was ironic – something Austen is known for.

A Twitter user, known as Hope, said: ‘Perhaps they chose the quote tongue-in-cheek, as a tribute to Jane Austen’s use of irony.’

Another user, called James, said: ‘Jane Austen is the Queen of Irony, so the quote is very apt.’

Sadie Berlin wrote: ‘Folk offended by the Jane Austen quote on the tenner are just as fussy & annoying as Austen’s fussiest and most annoying characters #fitting.’

It has also caused other problems, with Britain’s banks urged to upgrade cash machines because the new polymer notes are ‘too slippery’.

Bosses at Diebold Nixdorf, the firm which makes ATMs, said the network of around 70,000 UK machines would need to be upgraded once the new polymer £10 notes enter circulation.

Some of the devices have already been improved to handle polymer £5 notes after it was released last autumn.

But Andy Mattes, chief executive of Diebold Nixforf, told the Times the new £10 ‘would be a catalyst for innovation’ around the machines.

He said: ‘Most of the old machines cannot handle polymers because they are too thin and too slippery. There will have to be an upgrade of both hardware and software.’ 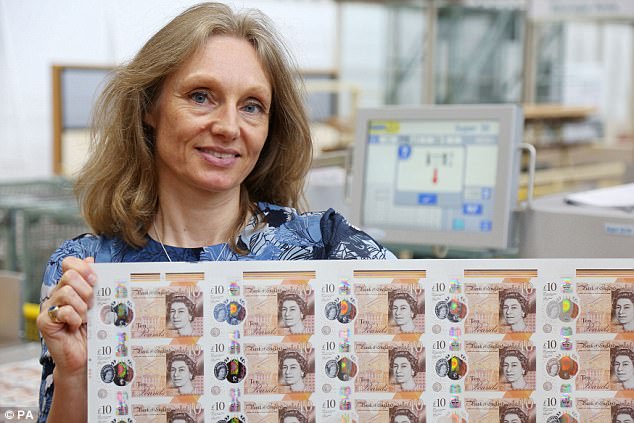 Ms Cleland poses with the new note, which will be issued in two months’ time on September 14

It also believed there could be upgrades to allow customers to withdraw cash using their mobile phones following improvements that allow people to pay for products and services using their devices. Barclays is understood to be testing machines to see if it is viable.

Mr Mattes added the ‘death of cash was vastly exaggerated’ ahead of an ATM Industry Association conference in London this week which marks the 50th anniversary of the cash machine.

According to the Guardian, Diebold Nixdorf has created a prototype ‘iPhone ATM’ which gets rid of the keyboard and ‘works like a tablet’ using a touchscreen.

Other ‘futuristic’ designs include ATMs that allow customers to access funds by scanning a fingerprint or a ‘selfie’ cash machine where a photo is needed to withdraw funds.

How much would a tenner have been worth in Jane Austen’s time?

Ten pounds in Jane Austen’s time would have been worth the equivalent of £786 in today’s money, research has found.

If the Bank of England had wanted the new £10 banknote to have the same purchasing power that £10 enjoyed 200 years ago, it would need to be revalued as the £786 banknote, according to analysis by British insurance firm Aviva.

But the eroding impact of inflation over time means a tenner has a relative purchasing power of only 13p, compared with what it could have bought in 1817 – the year of Austen’s death, Aviva found.

Alistair McQueen, head of saving and retirement at Aviva, said: ‘Inflation silently shrinks the value of our hard-earned cash.

‘Today’s new £10 note allows us to powerfully demonstrate the impact of inflation over time.’

The new £10 note is the first Bank of England banknote with a tactile feature to help blind and partially sighted users – a series of raised dots in the top left-hand corner.

The £5 polymer does not have any dots, meaning it will be clear to the visually-impaired that the £10 polymer is a £10 note.

The new £20 polymer will have dots when it is released in 2020, but these will be in a different formation.

Campaigners for the visually-impaired welcomed the new note, which was designed and printed by De La Rue.

Wendy Rankin, director of mobility services at the charity Guide Dogs, said: ‘We’re delighted that the Bank of England has included a tactile feature on the new polymer £10 note, ensuring that people with sight loss can continue to use cash with confidence.’

Colour-changing quill and raised dots: Ten facts about the new £10

The new £10 banknote featuring Jane Austen will be issued on September 14 and will start appearing in the nation’s wallets in the following days as it leaves cash centres around the country. Here are 10 things you should know about the new tenner:

1. The new £10 note is the first Bank of England banknote with a tactile feature to help blind and partially sighted users – a series of raised dots in the top left-hand corner.

2. Security features include a see-through window featuring the Queen’s portrait, a quill which changes from purple to orange and a hologram of the coronation crown which appears 3D and multi-coloured when the note is tilted. 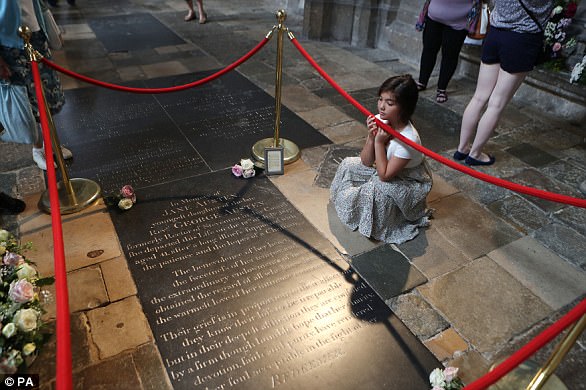 3. Winchester Cathedral, where Austen is buried, also features on the note. It is shown in gold foil on the front and silver on the back.

4. The note features a portrait of Jane Austen. An engraving was commissioned by her family and based on an original sketch of Austen drawn by her sister, Cassandra Austen. The choice of the portrait has drawn some controversy, with some claims it gives Austen a ‘makeover’ compared with her sister’s original sketch. 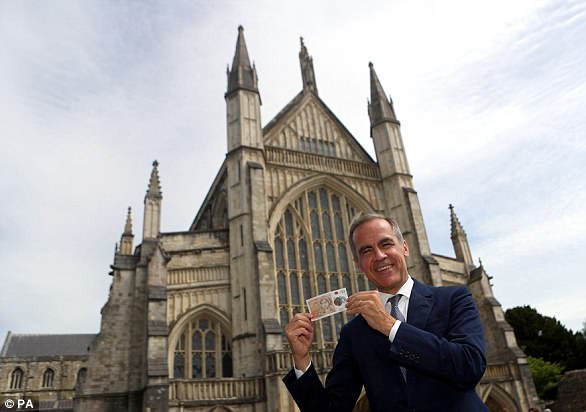 Winchester Cathedral, where Mr Carney is pictured today, also features on the note

5. The selection of Austen removed the possibility of a long-term absence of women on Bank of England notes, apart from the Queen, after it was announced that Sir Winston Churchill would replace social reformer Elizabeth Fry on the £5 note. The prospect of a lack of female faces on banknotes caused an outcry.

6. The new Austen note joins the £5 note featuring Sir Winston as the Bank of England’s first ‘family’ of banknotes to be made from polymer.

7. Polymer banknotes last around two and-a-half times longer than paper ones and are also said to be able to survive a spin in the washing machine.

8. But the polymer notes issued by the Bank have also been controversial, after the discovery in late 2016 that animal-derived additives were used in the manufacture of the new £5 note. The Bank looked into the issue and decided in February 2017 that the new £10 note would be manufactured on the same polymer material. By then, it had already printed 275 million £10 notes at a cost of £24 million. The Bank has run a public consultation on future print runs of the £10 and £5 and the next £20 note, which will also be printed on polymer. 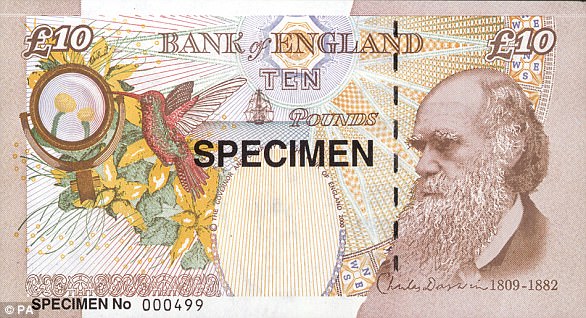 9. As well seeing Austen on banknotes, you may also spot her on coins – she features on a new £2 coin issued by the Royal Mint.

10. People can still spend the existing paper £10 note alongside the new tenner when it is first issued. Legal status of the paper £10 note featuring Charles Darwin will be withdrawn in Spring 2018.