The most hi-tech Bentley ever has been launched with the world’s first three-way rotating dashboard that takes its inspiration from James Bond’s famous revolving number plate.

A clever triangular ‘Toblerone-style’ device showing three different dashboard ‘faces’ allows the driver to choose which one to view.

The new model is due to go on sale next year with a £160,000 price tag, It will be capable of smashing through the 200mph barrier and will be built exclusively in the UK.

There are plenty of new features for the revised 2018 Continental GT, but let’s start with the car’s clever new party-piece dashboard.

At first glance the fascia of the sporty new Bentley displays a clear smooth wood veneer. But fire up the engine and the middle of the dash ‘glides silently forward and rotates’ to reveal a 12.3-inch display screen with three ‘windows’ for navigation, telephone and general media.

At the flick of a switch, the driver can spin it again to reveal a third ‘face’ – showing three analogue dials displaying outside temperature, a compass and a chronometer.

It is inspired by the rotating number-plate gadget used in the James Bond movie ‘Goldfinger’ on 007’s gadget-laden Aston Martin DB5 – using three-sided faces, like on the distinctive triangular packaging of the Toblerone bar of chocolate.

Explaining how the Bond-like rotating dashboard display works, a Bentley spokesman said: ‘Forty moving components make up the mechanism, which is bespoke to Bentley.

‘Small electric drive motors linked to a series of tiny gear-boxes are controlled by a dedicated electronic control unit or ‘brain’. ‘To provide the rotation whilst maintaining extremely tight tolerances (less than 0.5 mm for each of the sides), three separate but linked motions are required. 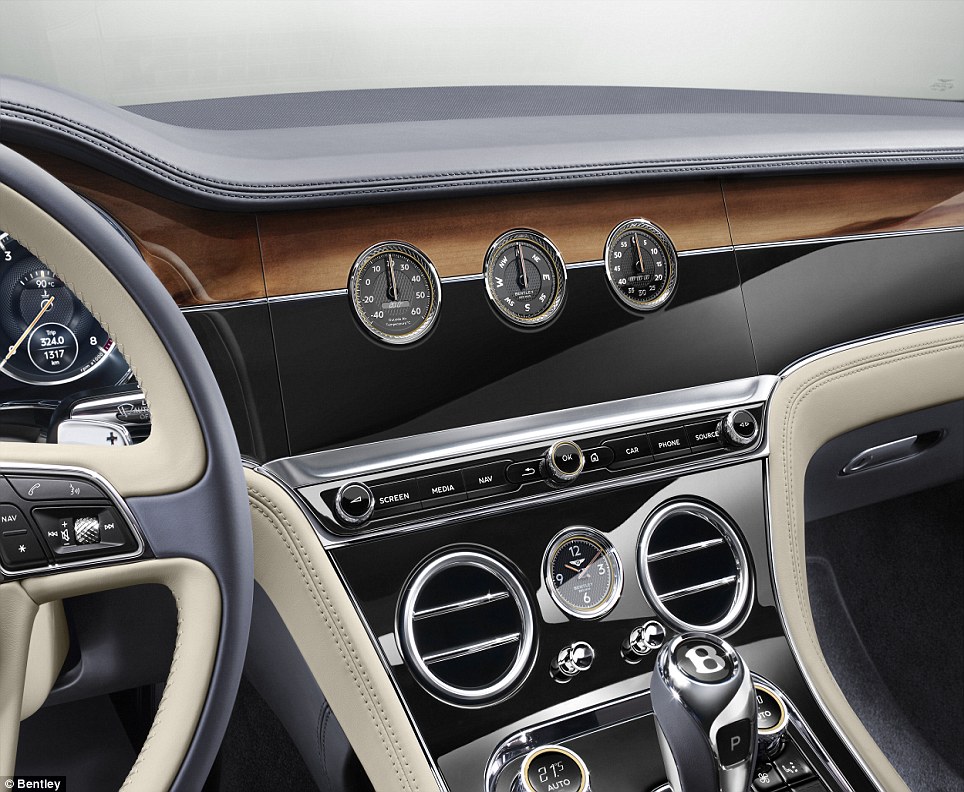 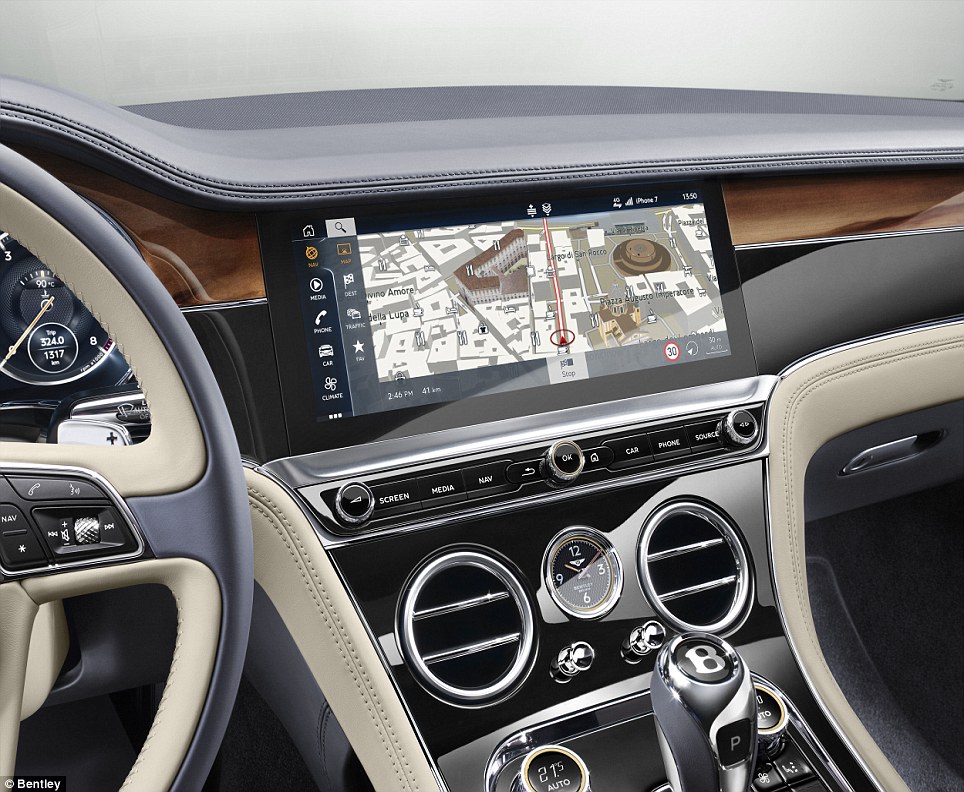 Ray Massey is particularly impressed with the rotating section in the central part of the dashboard. When the car is locked, it looks like a normal piece of wood veneer. But the driver can then switch between analogue dials (left) and a 12.3-inch sat-nav display (right) 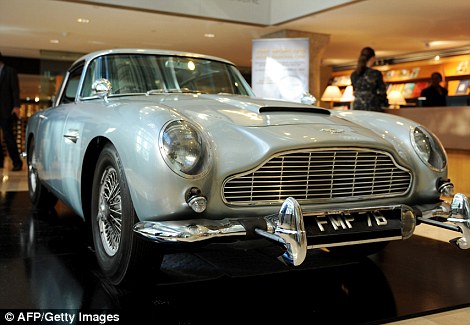 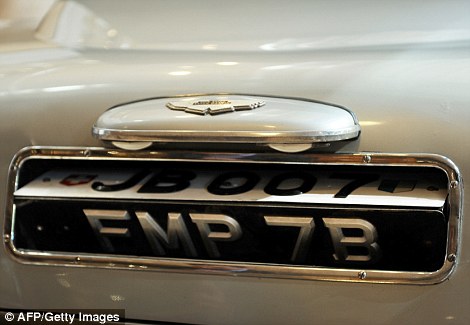 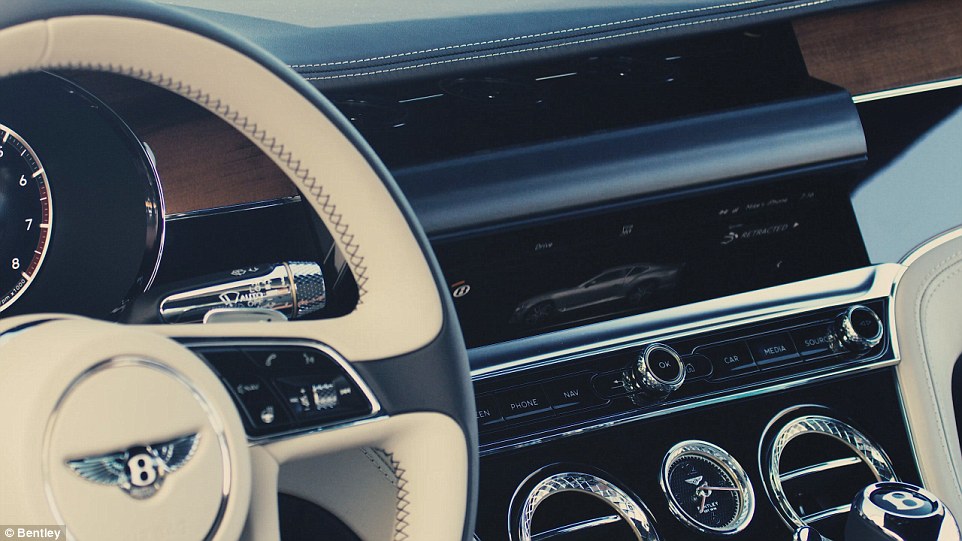 ‘The first moves the unit in to the dashboard to provide clearance for the second stage – rotation – before the unit is then moved back in to a flush position.’

The system even has built-in cooling fans to manage motor and screen temperatures.

Bentley said: ’It’s the most technologically advanced Bentley ever. And the rotating dashboard does add a little bit of James Bond magic.’

Away from the spinning display, Bentley said the new third-generation Bentley Continental GT will cost £160,000 when it goes on sale next year and is being built in Britain at the firm’s factory in Crewe which employs 4,000 people. 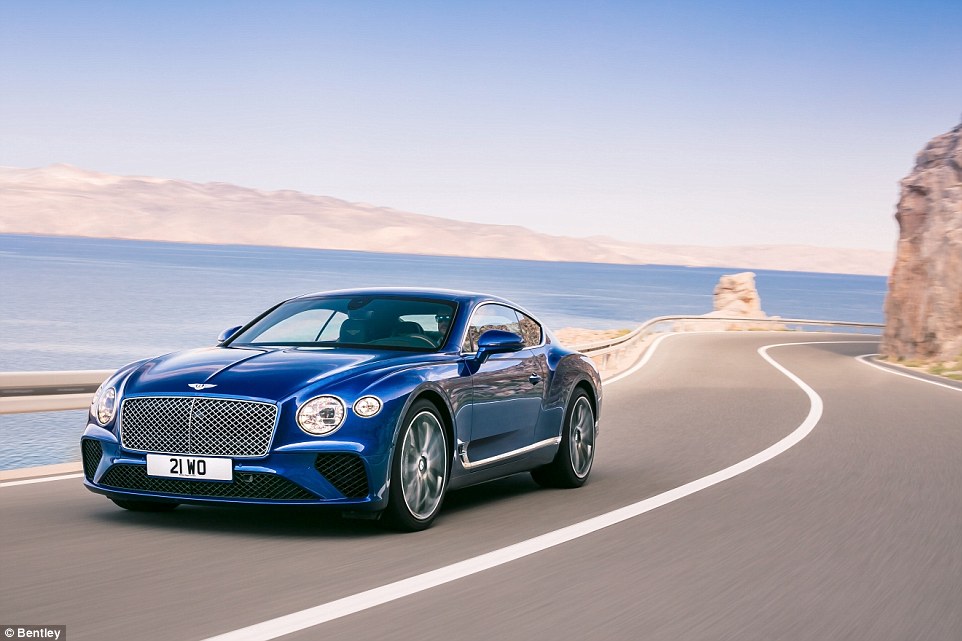 The new Continental GT will be built at Bentley’s factory in Crewe, with first deliveries expected in Spring 2018 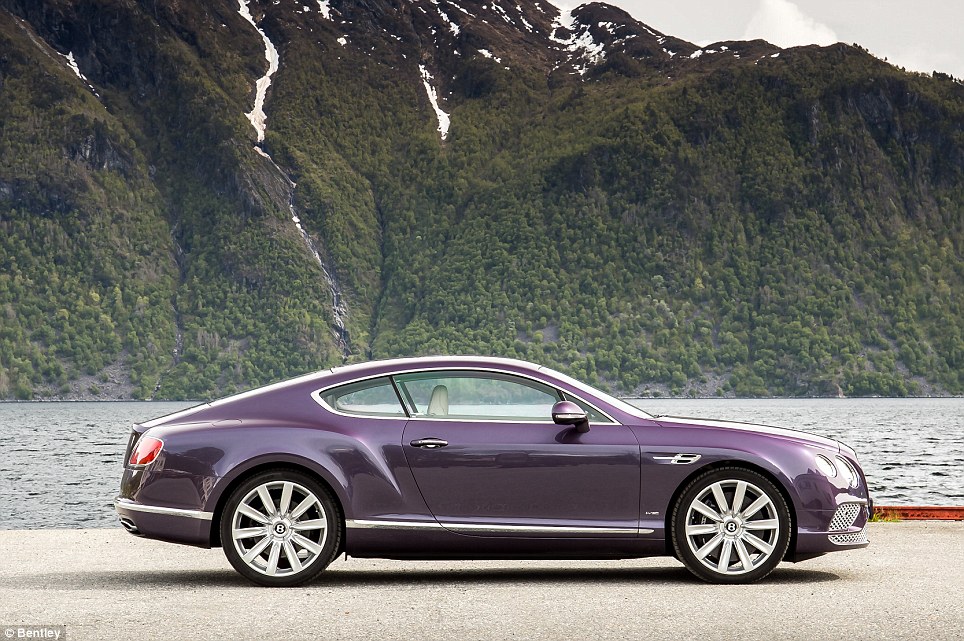 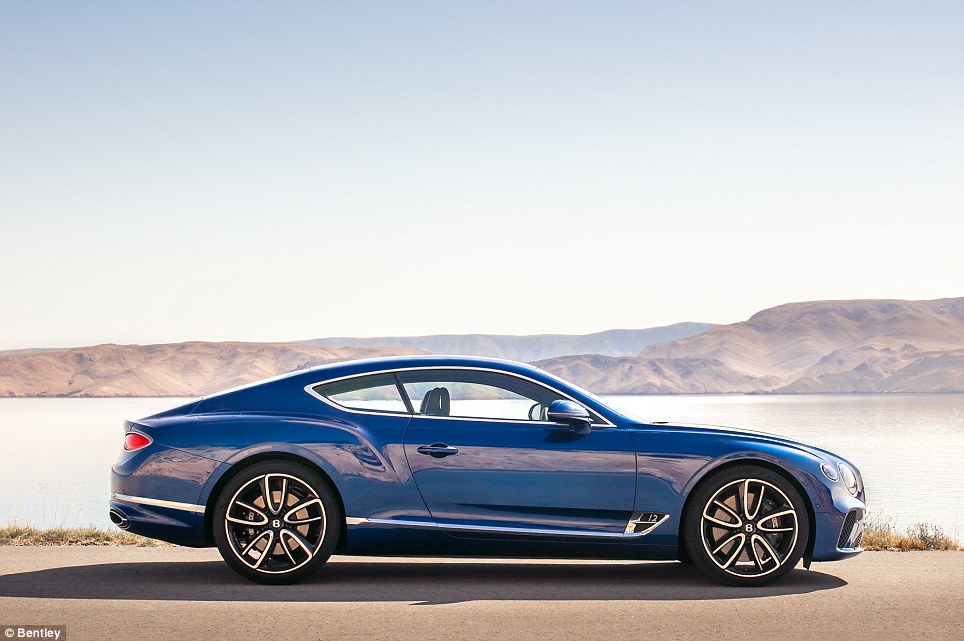 Left: The outgoing Continental GT. Right: The all-new car that will replace it from next year 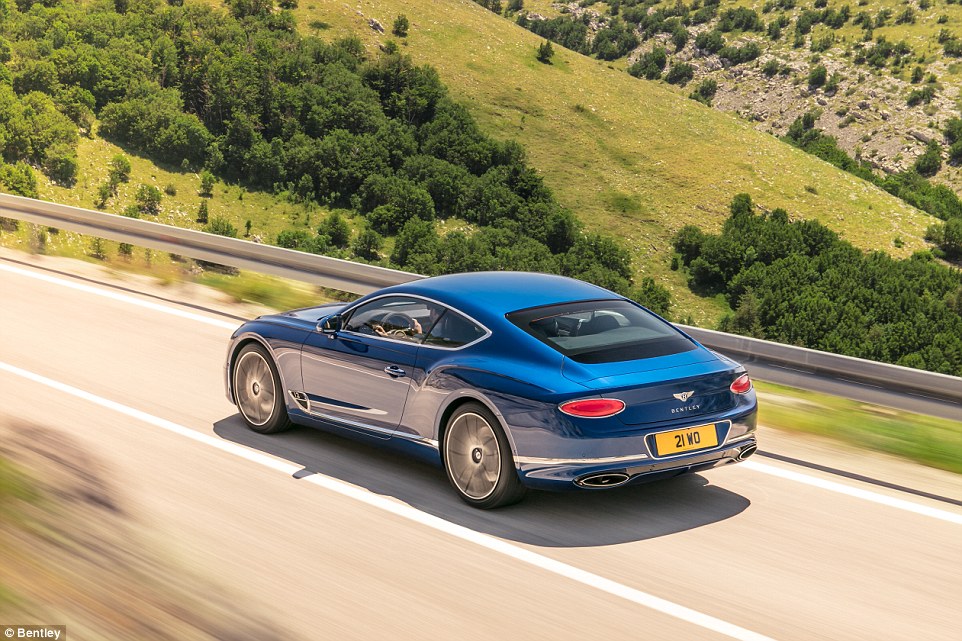 The biggest styling change comes at the back with reshaped rear lights and higher haunches over the rear wheels. It looks powerful but elegant at the same time

Since it first launched in 2003, some 66,000 Continental GTs have been sold, with the second generation car arriving in 2011.

Will it fit in my garage?

Bentley said big steps have been made and the new Continental GT is the ‘most technologically advanced car’ they have ever produced – with 2,300 circuit boards, five miles of wiring (8km), 92 electronic control units, and 100 million lines of computer code, some 15 times the amount on a Boeing 787 Dreamliner, to make it all work.

Details of the new Bentley ‘Grand Tourer’ have been revealed ahead of its global launch at the Frankfurt Motor Show in September ahead of first deliveries from Spring next year.

Styling is influenced by the classic R-Type Continental of 1952.

The 2018 model has a longer and lower profile, with the front wheels further 5 inches (135mm) forward which allows the bonnet to be extended and the nose lowered. But it is at the back where changes are most noticeable.

The muscular rear haunches are more pronounced and the rear tail-lights are shaped into ellipses to echo the silhouette of the exhaust pipes below them.

It will go into production in December, with the brand, which is part of the giant Volkswagen group, confirming that the Continental GT will be ‘designed, engineered and handcrafted in Britain’.

It accelerates from rest to 60mph in just 3.6 seconds – 0.7 seconds faster than its predecessor – thanks to its powerful and enhanced 6.0-litre W12 turbo-charged petrol engine developing 626bhp and linked to a slick new eight-speed dual-clutch automatic gear-box.

It means the top speed is 9mph faster than the outgoing car at a colossal 207mph. Fittingly, the braking system is the most powerful system ever fitted to a Bentley, with a total of 28 pistons.

As well as being quicker than before, Bentley promise the new GT will be sharper, lighter and more refined, with improvements to ride and handling and suspension, including a roll-control system, so that it corners ‘almost completely flat.’ Though predominantly rear wheel drive, the new all-wheel drive drive train switches power around to where it is needed most.

It has been tested over more than 600,000 miles around the globe in temperatures from sub-zero to 50C – from the Middle East and South Africa to the America and China – and even on a special piece of pot-holed road near the firm’s Pym’s Lane factory which Bentley persuaded the local council to leave unrepaired because it gives such a good real-world experience of wear and tear on UK highways. 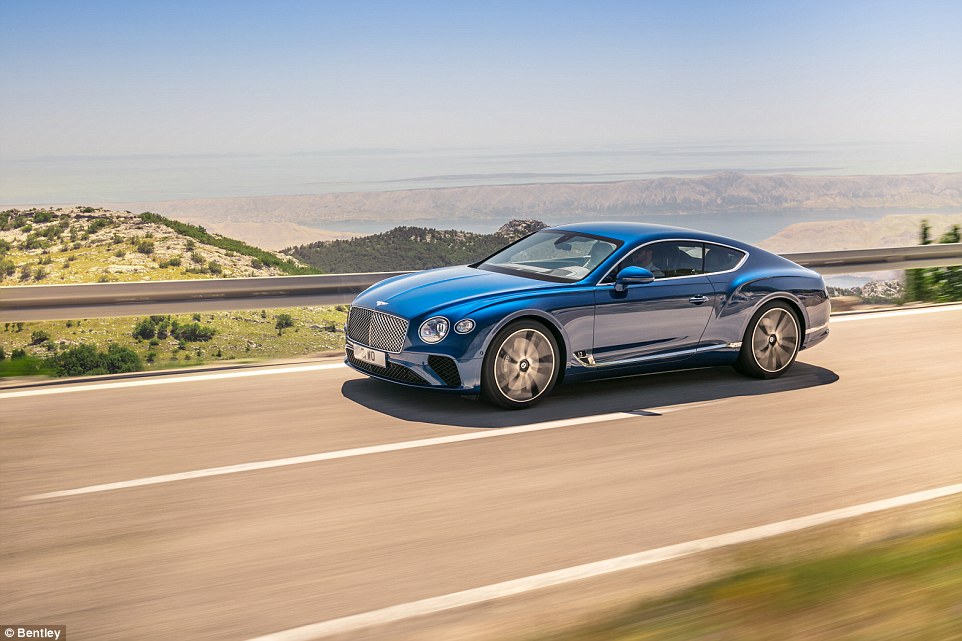 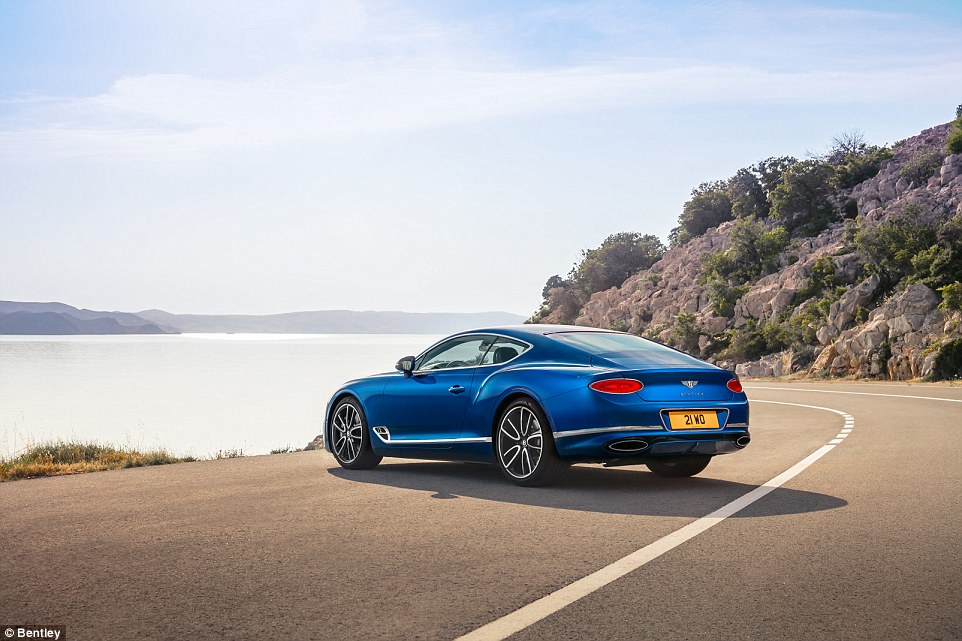 Bentley says the new Continental GT accelerates from rest to 60mph in just 3.6 seconds – 0.7 seconds faster than its predecessor 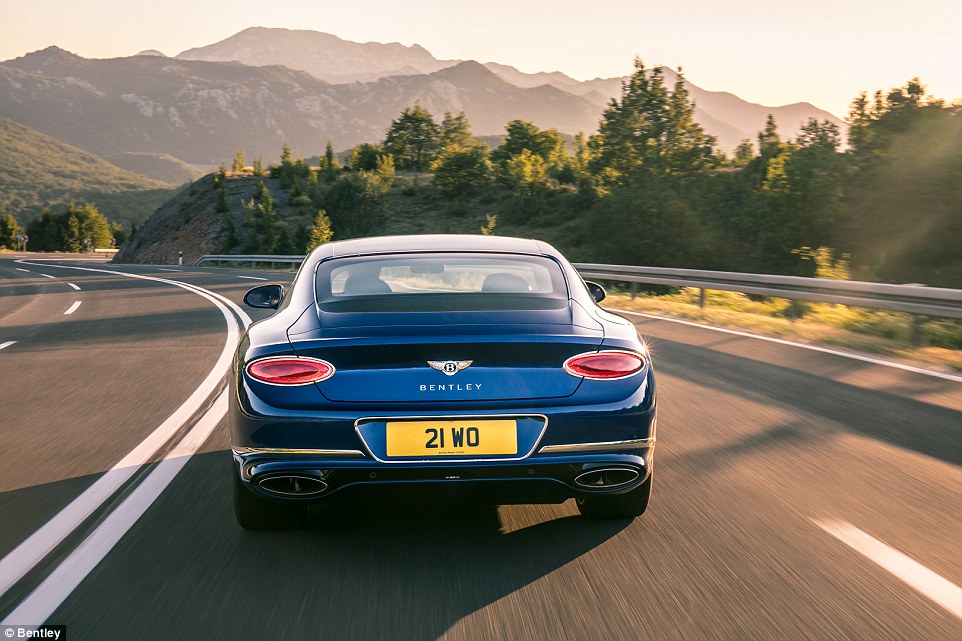 The British car maker also confirmed that the new model is 16 per cent greener than the model it replaces. Fuel economy has also been improved from 19.9mpg to 23.2mpg

Despite improvements to fuel efficiency – it averages 23.2mpg compared to 19.9mpg for the previous model – it’s still a gas-guzzler. CO2 emissions are a hefty 278g/km despite a 16 per cent improvement.

But it has shed 80kg in weight thanks to new hi-tech body forming and chassis technologies. And start-stop technology cuts out the engine at idle while a ‘sports launch’ allows a fast getaway.

The new Continental GT is also packed with safety equipment including blind-spot warning, traffic sign recognition, night-vision, lane-assist head-up display on the windscreen, automatic adaptable dipped and high-beam headlights; An ‘exit warning’ alerts occupants about to get out of the vehicle of cars or cyclists approaching from the rear. 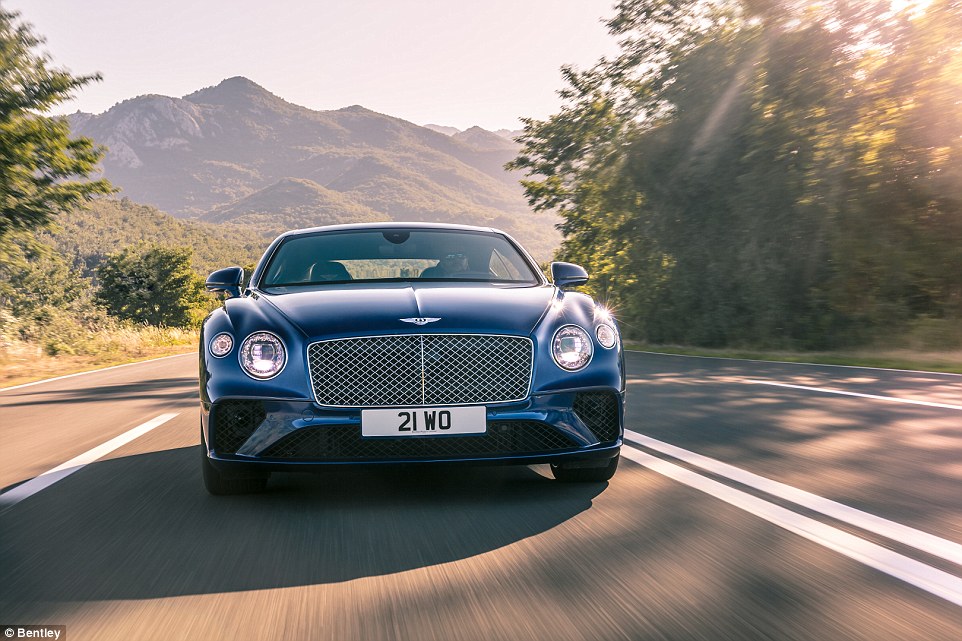 The front-end has also had a re-design, featuring the enormous grille with a sheet chrome effect and a lower nose than the car it replaces in the range 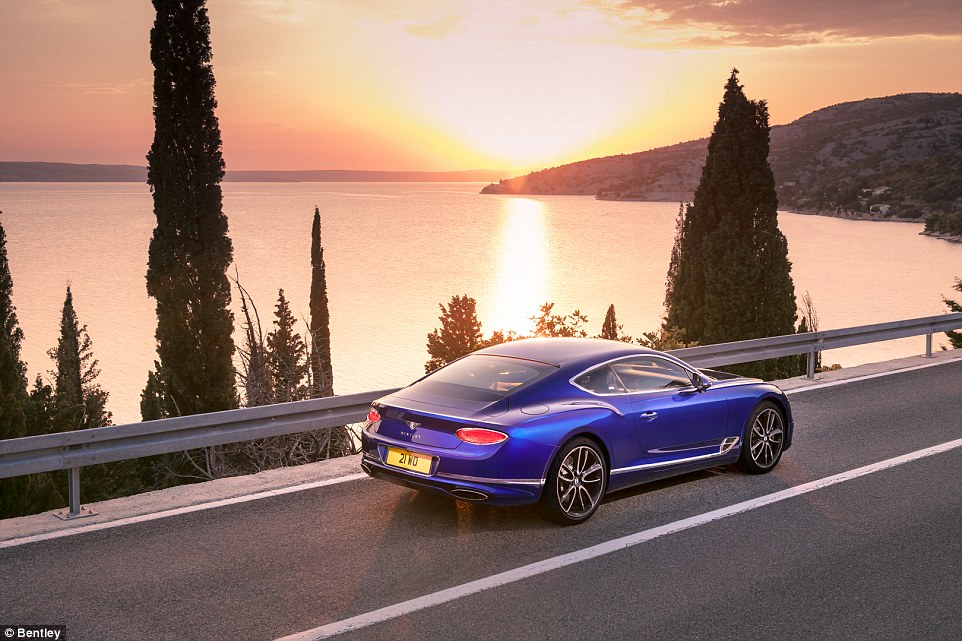 Since it first launched in 2003, some 66,000 Continental GTs have been sold, with the second generation car arriving in 2011 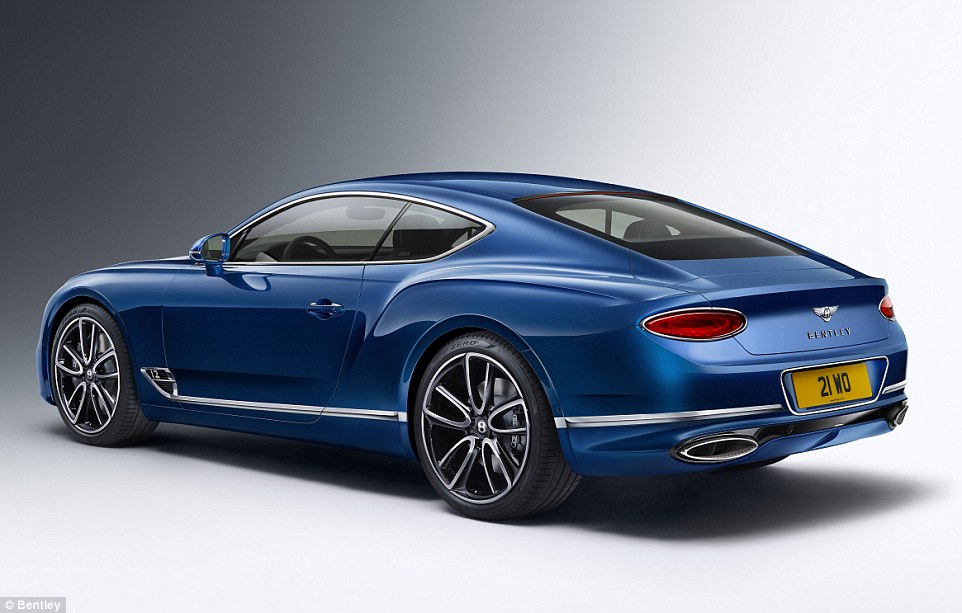 Want one? Prices will start from £160,000, though a raft of available optional extras means no car will leave a showroom at that price

Among other safety features ‘City Safeguard’ detects pedestrians and warns the driver if a collision is likely, preparing the car to brake. When reversing out of a parking space, radars detect any crossing traffic including bicycles and warn the driver of potential collisions.

Four cameras around the car mean the driver can also see on the car’s central screen a virtual bird’s eye view of the vehicle’s surroundings and any obstacles. A park-assist system detects suitable parking spaces can steer the car autonomously into the slot.

A Touring Specification option brings a suite of aids for highway traffic and long-distance driving including adaptive cruise control with ‘Stop & Go’ which cut s the engine when stopped in traffic or at lights. In traffic, the system senses queuing vehicles and initiates small steering inputs to keep the car in line without visibility of road markings. 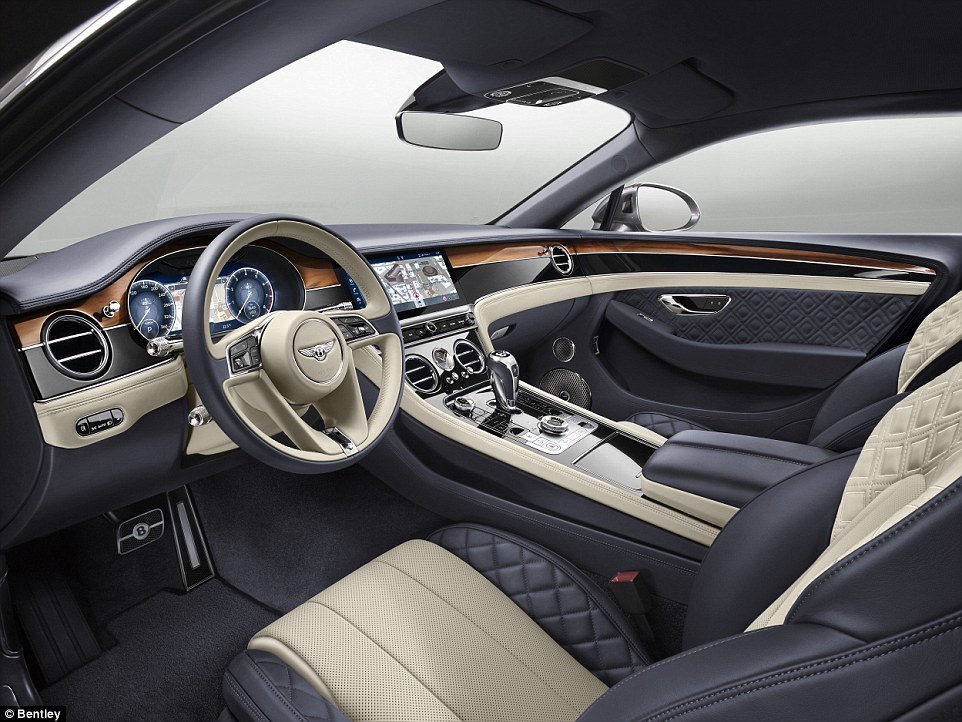 Inside, the new Continental is a classy place to be. See our panel below on the new features it boasts from next year 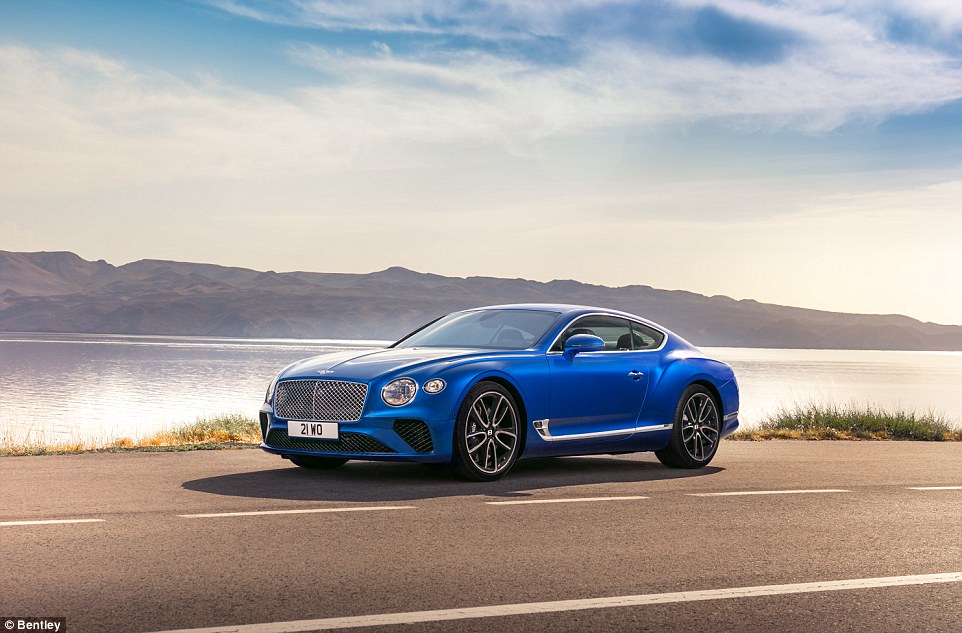 Another system scans the road ahead and recognises possible frontal collisions before alerting the driver. It automatically applies the brakes to prevent collisions at low speed.

Wolfgang Dürheimer, chairman and chief executive of Bentley Motors, said: ‘Bentley has been at the forefront of luxury Grand Touring for nearly one hundred years. The new, third-generation Continental GT is the pinnacle of our design and engineering achievements and marks the next step in Bentley’s journey’. 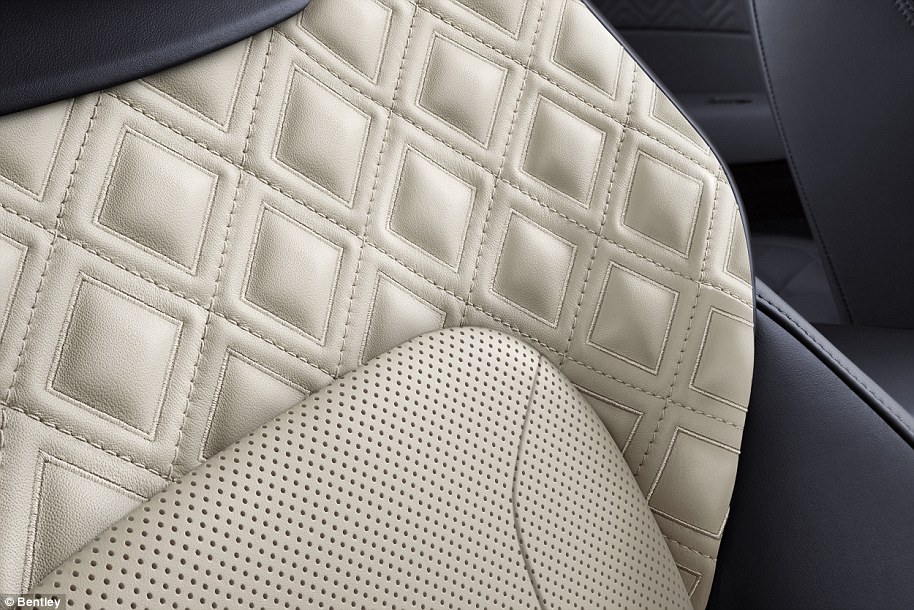 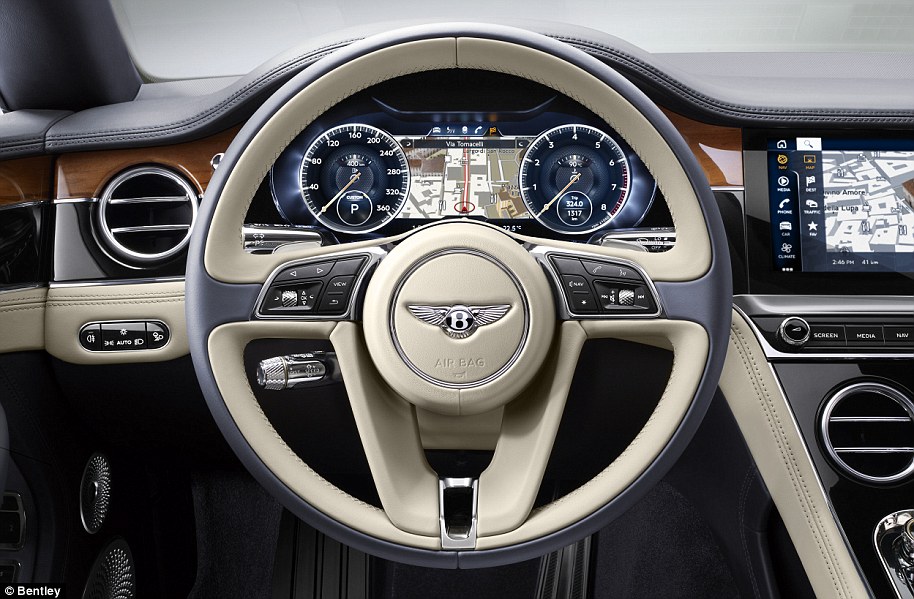