Savers and cash hoarders are being warned to consider the eroding impact of inflation as the Bank of England’s new £50 note entered circulation today.

After being withdrawn in 1945, the £50 was reintroduced into circulation in 1981 – at that point it had the purchasing power of around £217 at today’s prices.

The new £50 polymer banknote, which features mathematician and code-breaker Alan Turing will become the final bank note to switch from paper to plastic.

Anyone who stashed a £50 note under the mattress 40 years ago would find they now have considerably less purchasing power.

There are currently 330million £50 notes in circulation – with a combined value of £16.5billion.

Britons should take heed of history, according to Hargreaves Lansdown, and think carefully about how best to protect the purchasing power of a £50 note in the future.

If you’d saved the £50 at launch and it grew at two per cent a year it could be worth around £110 today.

As for those who invested the £50 at its relaunch, they are likely to have made a much healthier return. 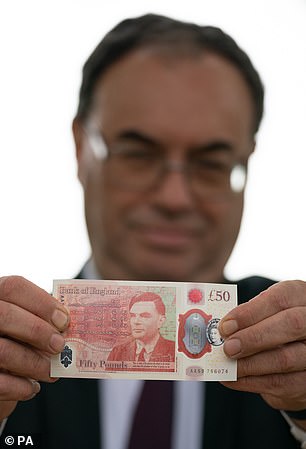 Governor of the Bank of England Andrew Bailey with the new £50 note which features Alan Turing.

‘£50 isn’t what it used to be,’ said Sarah Coles, personal finance analyst at Hargreaves Lansdown.

‘If you had a modern £50 note when it was first issued in March 1981, and kept it under the mattress ever since, it would have lost more than three quarters of its buying power.

‘By contrast if you’d put the £50 into a savings account paying an average of 2 per cent over this period, it would have delivered just £110.

‘It demonstrates that while holding emergency cash in savings is invaluable, keeping too much in cash over the long term means you risk losing spending power after inflation.’

The rate of inflation rose to 2.1 per cent last month on the back of a surge in fuel prices, food, drink and clothing.

If inflation were to rise by 2.1 per cent over the next 10 years the actual value of a new £50 note will fall nearly a quarter, meaning in ten years your £50 will be worth the equivalent of £38.45 in terms of purchasing power.

There is currently not one savings account that can outpace the eroding power of inflation with many commentators predicting that worse is still to come.

When is the last day you can use paper £50

But after 30 September 2022, many banks will still accept withdrawn notes as deposits from customers.

For example, HSBC and Lloyds Bank are on average paying 0.02 per cent, NatWest pays only 0.03 per cent across its range of easy access deals, whilst Santander pays 0.04 per cent on average.

Only six out of the 15 best known banks and building societies can beat the market average easy access rate of 0.17 per cent, according to Moneyfacts.

Out of the 15 brands, Yorkshire Building Society and Virgin Money Group come out on top, paying an average of 0.3 per cent and 0.28 per cent respectively.

‘The past year has not been favourable to savers and it wouldn’t be surprising if they feel apathetic when it comes to switching their easy access account,’ said Rachel Springall, Finance Expert at Moneyfacts.co.uk.

‘Interest rates dropped to record lows and such an environment could even be a deterrent for savers who may feel there is little point chasing down interest on a flexible account.

‘However, we can see savers would be better off either by moving their money or opening an account away from the biggest high-street banks.

‘Away from the 15 well-known brands, we have seen market-leading easy access rates from alternative banks, including Cynergy Bank, Atom Bank, ICICI Bank UK and Charter Savings Bank all paying 0.50 per cent.’

Those willing to consider longer term fixed rate savings accounts may at least be able to partially offset the threat of inflation.

The best five-year fixed rate account, offered by Shawbrook Bank, is currently paying interest of 1.55 per cent – but that requires locking up your cash until 2026.

Savers opting for a shorter-term horizon could consider the latest one year fixed deals by Shawbrook Bank and Zopa Bank offering 1 per cent and 0.95 per cent respectively.

With inflation currently outpacing all savings rates and with fears this gap may only become worse, investing might be a more effective way to safeguard the value of £50 in the future.

‘Our figures demonstrate how, despite short term ups and downs in the market, when you’re investing for the long term, you have the chance to ride those out and tap into the long-term growth potential of the markets.

‘Although your first priority should be to build an emergency savings safety net of three to six months’ worth of essential spending.

‘It’s worth revisiting your spending, to see if you could free up £50 a week and put it aside in the way that makes the most sense for you.’

Before considering investing, Coles suggests taking advantage of the various tax breaks available that can also boost your long-term returns.

‘By using a Lifetime Isa or pension, you receive a government top-up before you even invest,’ said Coles.

‘If you’re aged 18-39, saving for a first property, and have at least a year before you buy, or for retirement, you can pay it into a Lisa.

‘With a pension, you’ll get tax relief at your highest marginal rate and if you pay it into a workplace pension, you might also get a matching contribution from your employer – supercharging the value of your pot.’