Now you can swim in Sydney HARBOUR: New ‘beach’ opens in the centre of Australia’s biggest city

City workers can now cool off with a refreshing lunchtime dip in one of Australia’s  most iconic waterways.

Sydneysiders have flocked to their newest ‘beach’ unveiled at the northern end of Barangaroo Reserve on Monday.

Marrinawi Cove is set to become the coolest place in town this summer as the first new harbour swimming spot to open west of the Sydney Harbour Bridge in more than half a century.

Formerly used by its traditional Gadigal custodians for fishing, canoeing and swimming for thousands of years, the NSW government hopes the harbour pool enclosure will the first of many new swimming spots along the city’s world famous waterway. 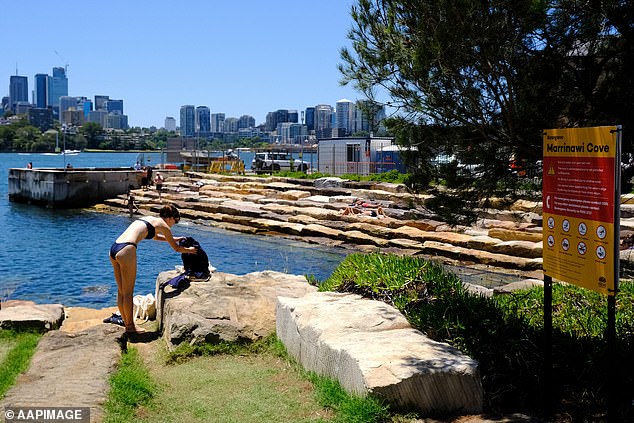 Located at the northern end of Barangaroo, Marrinawi Cove is Sydney’s first new harbour swimming spot to open west of the Harbour Bridge in more than 50 years

‘Our city stopped building ocean and harbour pools more than half a century ago – it’s past time to provide more great, safe public places to swim,’ minister Rob Stokes said.

‘Being able to swim at Marranawi Cove is only possible because we have invested in cleaning up our harbour from industrial wastelands to aquatic playgrounds.’

Sydney MP Alex Greenwich added: ‘This is a major win for the community who have advocated for the ban on swimming to be lifted.’

The new ‘beach’ boasts spectacular views of some of Sydney’s famous landmarks, including the Harbour Bridge.

Netting, signage and a new shower were installed so all swimmers can safely enjoy the facility.

‘How awesome. I would have loved to have a lunchtime swim when I worked in the city,’ one Sydneysider commented.

Another added: ‘Looks like an extra place to swim which is great, as long as it has shark nets. I wouldn’t call it a beach though, as it doesn’t have sand. Is there a toilet block close? 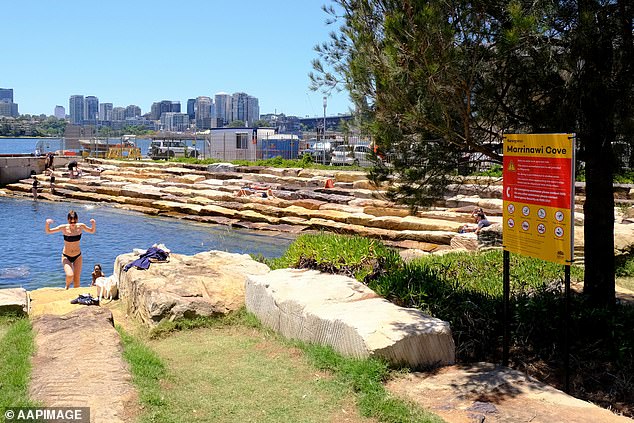 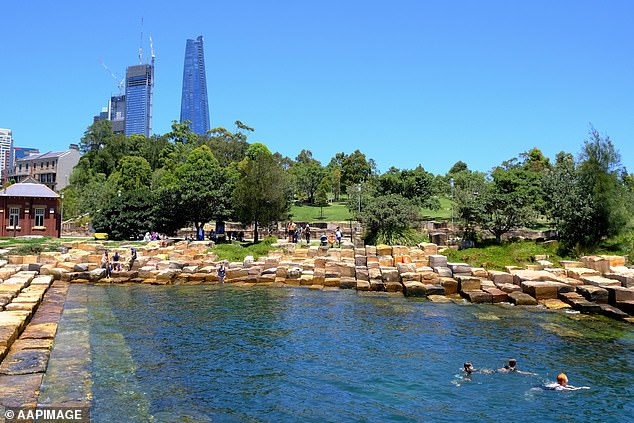 While some Sydneysiders were keen to be among the first test the waters, others opted to enjoy the views from the rocky foreshore

Others remain unconvinced, including concerns about pollution.

The NSW government will review patronage levels at the end of summer.

If successful, the swimming enclosure could be boosted with better facilities such as decking and ladders to enter the pool next summer.

The government also plans to explore more ways to increase public access to the harbour for swimming and water sports at other Barangaroo spots, along with Blackwattle Bay and Bays West. 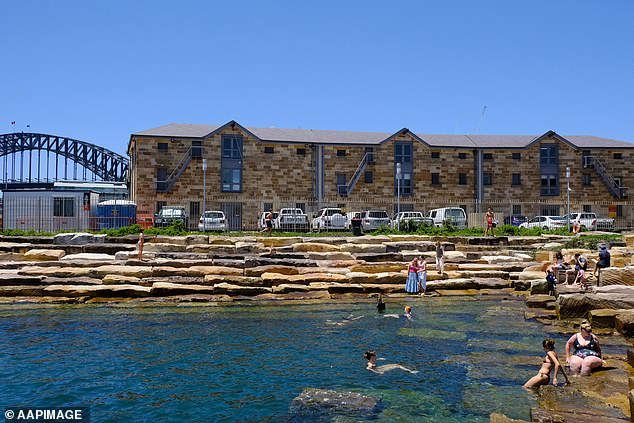