New blood pressure checker that goes around the wrist

Britain’s obesity epidemic means thousands of patients have become too fat to have their blood pressure taken normally.

Doctors have now been forced to develop a new type of blood pressure checker that fits around the wrist.

Medics say so many patients are now so overweight they cannot use the traditional device designed to go around the upper arm.

Studies show a quarter of the adult population in Britain is obese, making the nation one of the fattest in Europe and the world.

The crisis has even led to the NHS spending thousands of pounds on super-sized fridges to store obese corpses, reinforced beds, bigger wheelchairs, and wider corridors.

Doctors have now been forced to develop a new type of blood pressure checker that fits around the wrist, called the RS7 Intelli IT (pictured)

As this is released, blood starts flowing again and can be detected by an automatic sensor or listened to by a doctor with a stethoscope.

But soaring obesity rates mean many patients’ arms are too wide to fit into devices or too fatty for monitors to accurately measure the blood flow.

To combat the problem, a new device called the RS7 Intelli IT, specifically for obese patients, will be launched later this year in the UK.

The device, made by health electronics manufacturer OMRON, uses a strap around the wrist to automatically monitor blood pressure.

It includes an LED positioning sensor which flashes if it is not in the correct position on the arm to avoid inaccurate readings.

The device, which will go on sale in the autumn, also links to an app, which patients can use to monitor their blood pressure and heartbeat.

Researchers at The Cardiovascular Institute, Paris, France, studied the RS7 Intelli IT to ensure it would give accurate results on the wrist.

They found patients were able to use the device at home to get results as accurate as those measured by a doctor in a clinic. 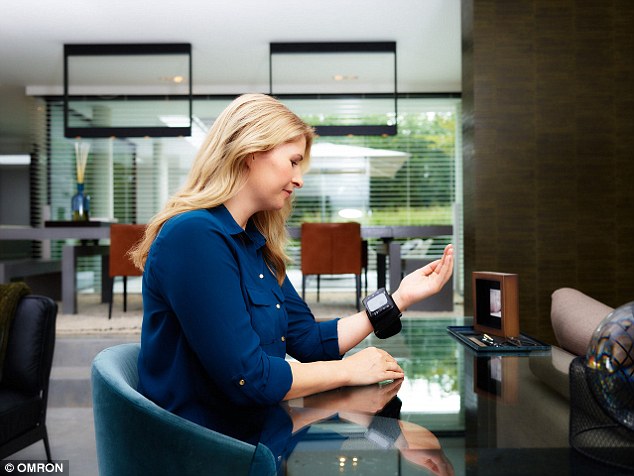 The device, made by health electronics manufacturer OMRON, uses a strap around the wrist to automatically monitor blood pressure

IS BRITAIN THE FATTEST COUNTRY IN THE BLOC?

Britain was shamed as the obesity capital of the EU last November.

This country has the highest rates in the bloc with nearly 30 per cent of women and just under 27 per cent of men overweight.

Other health figures were also worrying. They showed we are second worst at exercising and have one of the highest rates of heavy drinkers.

Britons are also near the top of an international table for having dangerously high cholesterol levels.

The statistics followed a warning that it has become normal to be vastly overweight, with this country following the lead of the US, the world’s most obese nation.

The analysis came from the European Society of Cardiology, which ranked British men as the most obese in 47 countries including the 28 in the EU.

Professor Asmar and his colleagues unveiled their study at the European Society of Cardiology congress in Munich, Germany.

The device is expected to be available in the UK to doctors and for patients to buy for home use for around £90.

Traditional blood pressure monitors cost anywhere in the region of £20 and £150, depending on the features they include.

Professor Asmar said: ‘Obesity is an increasing concern within the medical community due to the health implications it has for our patients such as the risk of hypertension, heart attacks and diabetes, among others.

‘As physicians, we need to constantly adapt to ensure we meet the needs of our patients and a device like [this] is a good example of an innovation that can help us to better monitor our patients and support them in monitoring their health.’

Checking blood pressure is important to detect whether patients may be at risk of heart attacks or strokes – both of which are more common in overweight people.

Patients with high blood pressure are sometimes encouraged to monitor their blood pressure levels regularly at home to make sure their condition does not deteriorate.

‘We know that obtaining accurate blood pressure readings with traditional devices can be a real challenge for these patients.’