New book reveals heart-stopping love shacks around the world, from Wales to California

These love shacks are proof that home is where the heart is.

Lovers don’t necessarily occupy the ‘love shacks’ that are showcased, but rather, they’re ‘architectural odes to an unhurried life, to their natural surroundings and, ultimately, to love’, the author reveals.

Redman writes in the introduction: ‘Why do we yearn to skip town to our own little holiday house with those we love? Love Shacks explores this “desire” from the perspective of holiday homeowners throughout the world who, in telling their personal stories, provide answers.’

The compendium is filled with 320 photographs of 23 different holiday homes, from a whitewashed farmhouse in the Welsh countryside to a retro beach shack in South Australia and a ‘minimalist box’ in the Californian desert.

THE BOOKWORM CABIN, ADELIN, MAZOVIA, POLAND: This property, set in a forest outside Warsaw, is owned by Bartlomiej Kraciuk, a hospitality entrepreneur, and Marta Puchalska-Kraciuk, an architect. Bartlomiej tells the author: ‘There are little treats like mushroom picking without having to leave the terrace, and roe deer regularly pass right in front of the house.’ Inside, the walls are lined with bookcases ‘filled with hundreds of books’. When the couple arrive, they place their phones in a yellow box to avoid distractions, the book reveals. Luckily for fellow bookworms, it’s available for rental 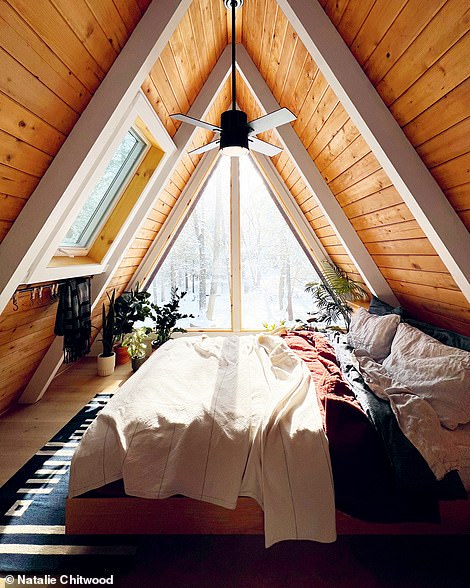 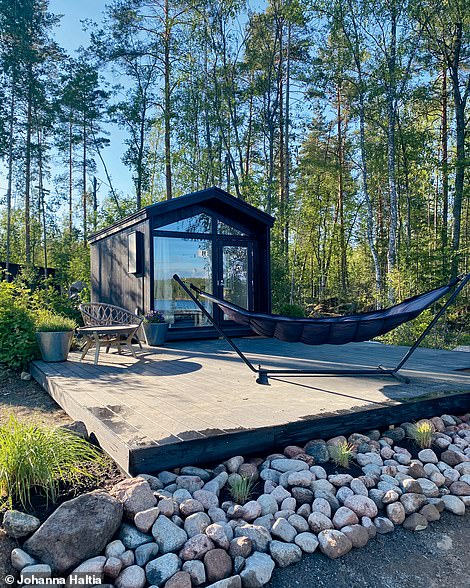 HEMLOCK HOLLOW A-FRAME, POCONO MOUNTAINS, PENNSYLVANIA (LEFT): Describing this property, Redman says: ‘The A-frame is an iconic American holiday home, which became the classic representation of leisure in the 1960s. So when New Yorkers Lauren Spear and Michael Goesele purchased a dilapidated one in the Pocono Mountains of northeastern Pennsylvania, the couple was determined to restore it with integrity.’ After introducing electricity and running water to the property, architectural designer Lauren and creative director Michael harkened back to the past with the decor, introducing midcentury furnishings, terrazzo tiles, and vintage art, the book reveals. VILLA SYSMA, LAKE PAIJANNE, SYSMA, FINLAND (RIGHT): This bunkhouse is part of a ‘kesamokki’ – a Finnish summer cottage – built by Johanna Haltia, who is the CEO of a ‘large fashion-centric shopping centre in Helsinki’, and her husband Mikko, the book reveals. The main cottage nearby houses a sauna, and solar panels are used for electricity. Redman says that the holiday house, which lies two hours north of Helsinki, offers views of ‘serene’ Lake Paijanne and Kammiovuori mountain 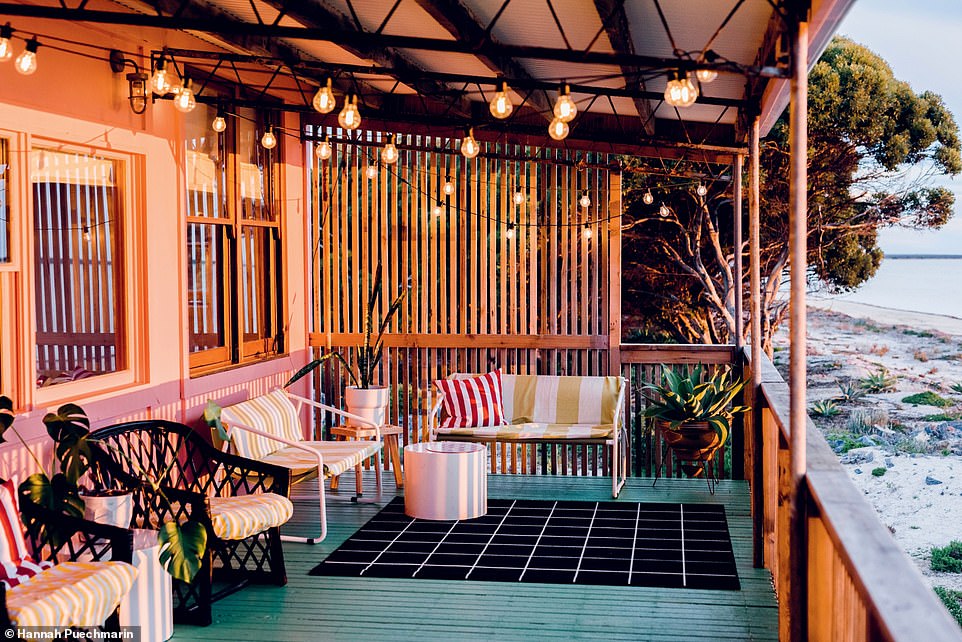 LOVE & MUTINY BEACH SHACK, CHINAMAN WELLS, YORKE PENINSULA, AUSTRALIA: This is the fairy-light-embellished balcony of an original 1950s beach shack that was bought and transformed by sisters Emma Read and Sarah Hall, who together run a vintage bespoke styling business, the book reveals. Redman writes: ‘Fishermen say the striking pink house… serves as a landmark for local seafarers.’ You can see and hear pelicans and black swans from the house, which has been decorated with a ‘celestial and astrological vibe’, the tome notes. The shack is available for holiday rentals 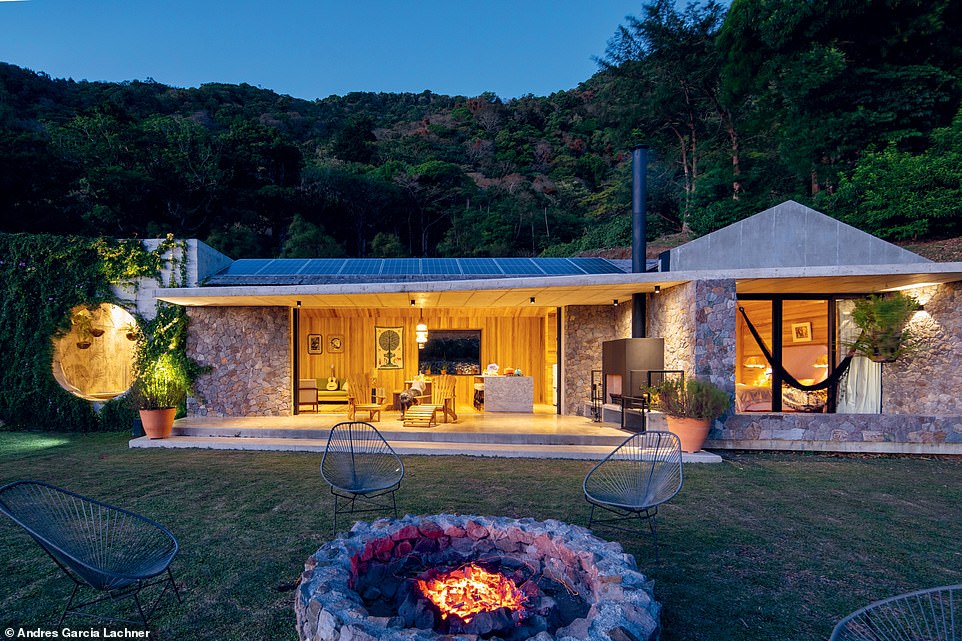 CASA SALVAJE, PALMICHAL DE ACOSTA, COSTA RICA: This ‘brutalist off-grid haven’ is surrounded by cloud forest in the mountains of Palmichal de Acosta. It’s owned by Costa Rican filmmaker Lilly Pena and frames her ‘beloved’ rainforest views. Redman reveals that the house is powered by solar energy and water is supplied from a spring uphill. Lilly, whose time on the mountain is devoted to ‘slow-living’, grows produce in the adjoining edible and medicinal garden. She tells the author: ‘I love the energy, the view of the mountain, the light at sunset, the moon shadow and stars. It’s as romantic as it sounds’ 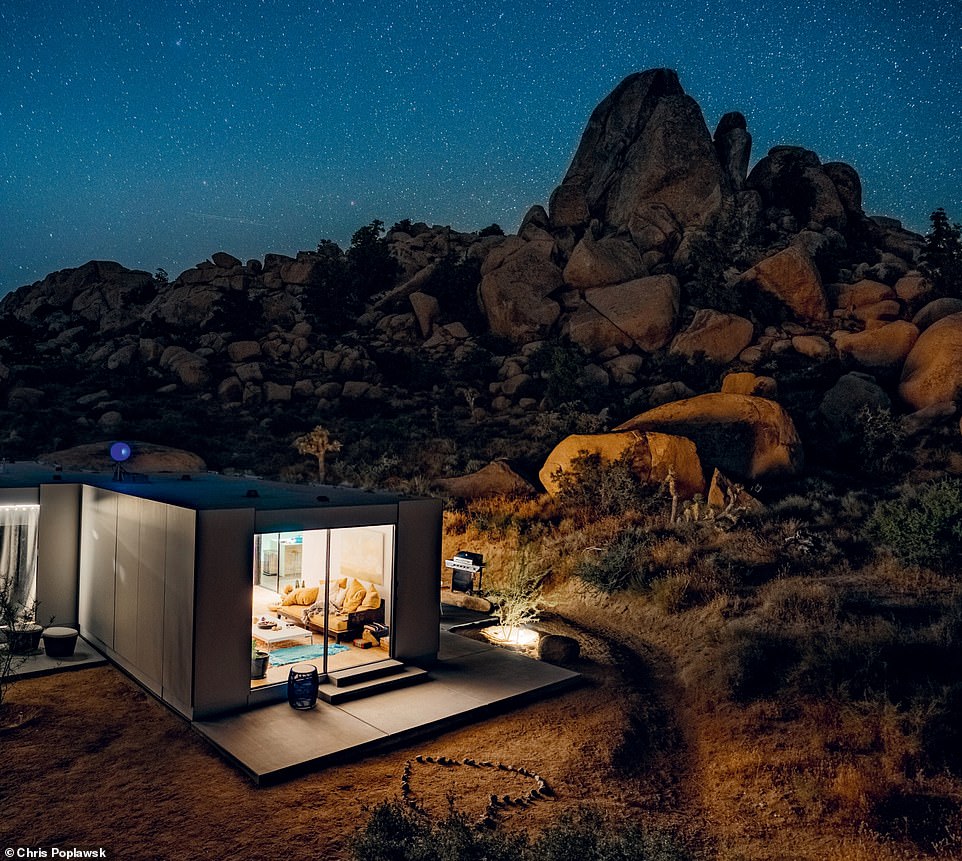 SOL TO SOUL HOUSE, PIONEERTOWN, MOJAVE DESERT, CALIFORNIA: Redman describes this property as ‘a stark white minimalist box’ that ‘sits in striking contrast to the dramatic russet amphitheatre of boulders that tower over and curl around it’. The abode is owned by writer and investor Leslie Longworth, who built it as an escape from her busy life in LA, the book notes. Leslie regularly goes hiking over the boulders or soaks in the tin ‘cowboy’ bath outside. ‘I often bring books and my laptop with the intention of writing, but I’m often seduced away from it by the vistas,’ she tells the author. The property is available for rental, the book notes 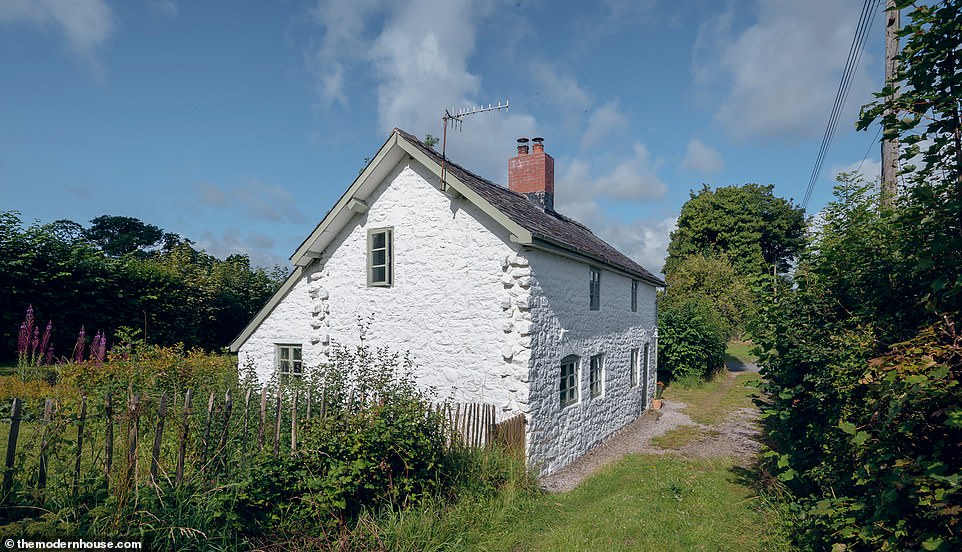 LITTLE HARP COTTAGE, OLD RADNOR, POWYS, WALES: This 17th-century stone cottage sits ‘atop a hill overlooking a valley in which Neolithic remains of a prehistoric tribal gathering place have been discovered’, the book reveals. Albert Hill, who works in the real estate of historic homes, bought the restored property with his wife Ciara in 2020. Albert tells the author: ‘From our position on the ridge… you watch the weather roll in and birds of prey swooping in the sky. It feels so ancient and unchanged.’ You can stay there yourself – it’s available as a holiday rental 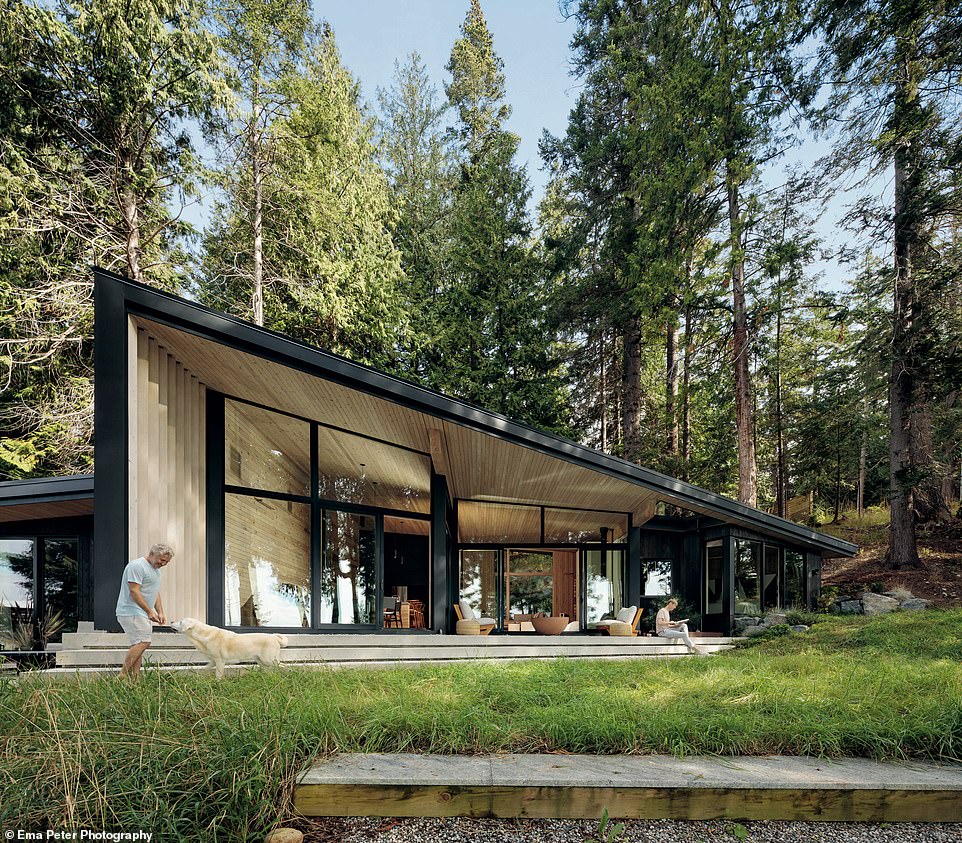 HALFMOON BAY CABIN, BRITISH COLUMBIA, CANADA: This cutting-edge cabin was designed by architect Patrick Warren for himself and his husband, marine biologist Kevin Kaufman. It sits a 40-minute ferry ride across the ‘stunning’ Strait of Georgia from the couple’s home base of Vancouver, the book reveals. It’s here that the couple held their wedding ceremony. The area is known for its wildlife. Patrick tells Redman: ‘One day we received [a] photo notification from our smart doorbell that “a person” was at the door. However, it was a large black bear lumbering down our front steps!’ 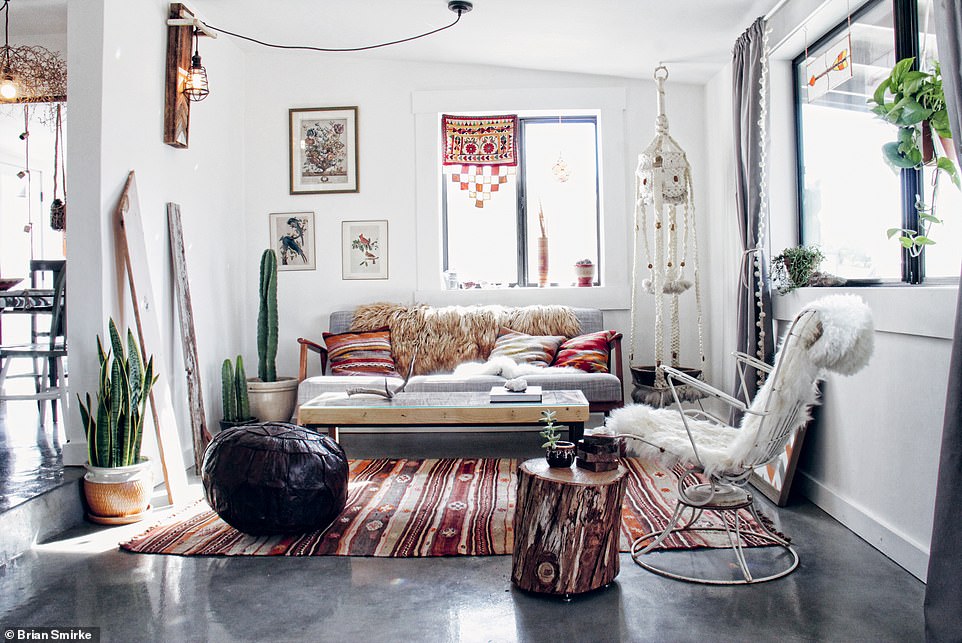 DESERT CABIN, JOSHUA TREE, CALIFORNIA: The book explains that this ‘little desert oasis’ is owned by Brian Smirke, a musician turned real estate developer, and his wife, Kathrin, a glass-artist-cum-stylist. The couple, who normally live on California’s Mendocino coast, discovered the then-derelict cabin on a weekend away in Joshua Tree National Park. After they bought it, their next steps were to gut the cabin and remodel it ‘to create a boho vibe’, the book reveals. It’s available to rent 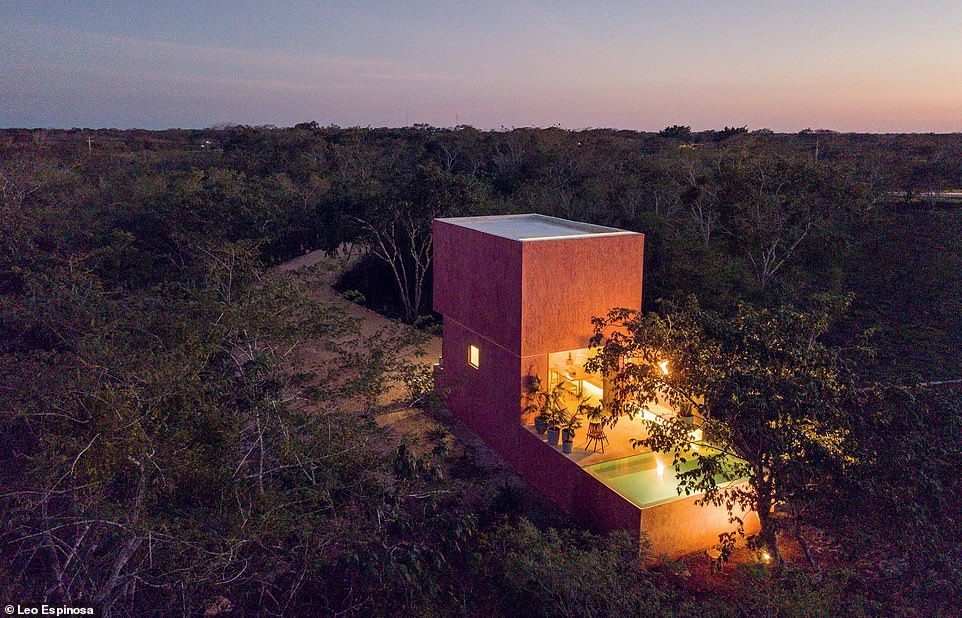 CASITA JABIN, VALLADOLID, YUCATAN, MEXICO: Located in the subtropical jungles of the Yucatan Peninsula is this ‘stacked pair of pink cubes’, which form a ‘contemporary one-bedroom getaway’. It’s ideally situated ‘near ancient Mayan pyramids and a walk away from the otherworldly waterhole Cenote Suytun’, the book reveals. Owners and married couple Anette Urbina Gamboa and Eduardo De la Pena Corral use the abode to unplug from their ‘busy corporate lives’ in Mexico City, the book explains. Travellers can experience it for themselves by renting the property via Airbnb 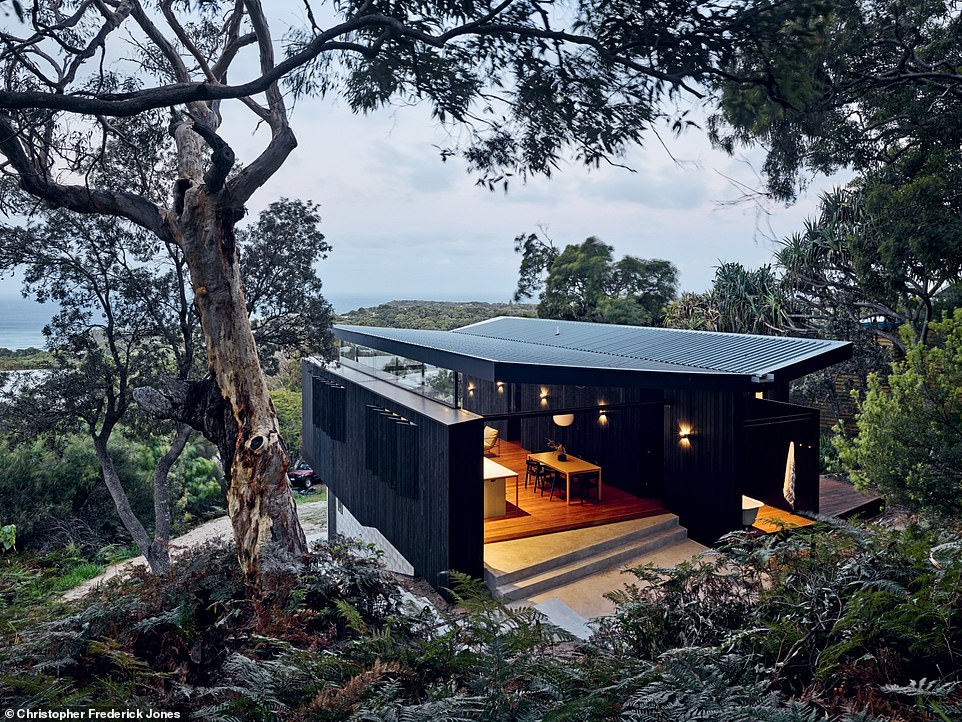 BAKER BOYS BEACH HOUSE, NORTH STRADBROKE ISLAND, QUEENSLAND, AUSTRALIA: This striking property’s design was inspired by the beach shacks that were typically built on Stradbroke Island from the 1960s to the 1990s. Located on a steep slope, one side of the structure is cantilevered to ‘take full advantage of sweeping ocean views’, the book reveals. It’s right in the heart of nature, as Frederic Dubois, one of the co-owners of the house, reveals: ‘Sometimes, I get up for my morning run, and the kangaroos, occasionally with babies in the pouch, are feeding on grass, right outside our door. It’s pretty special’ 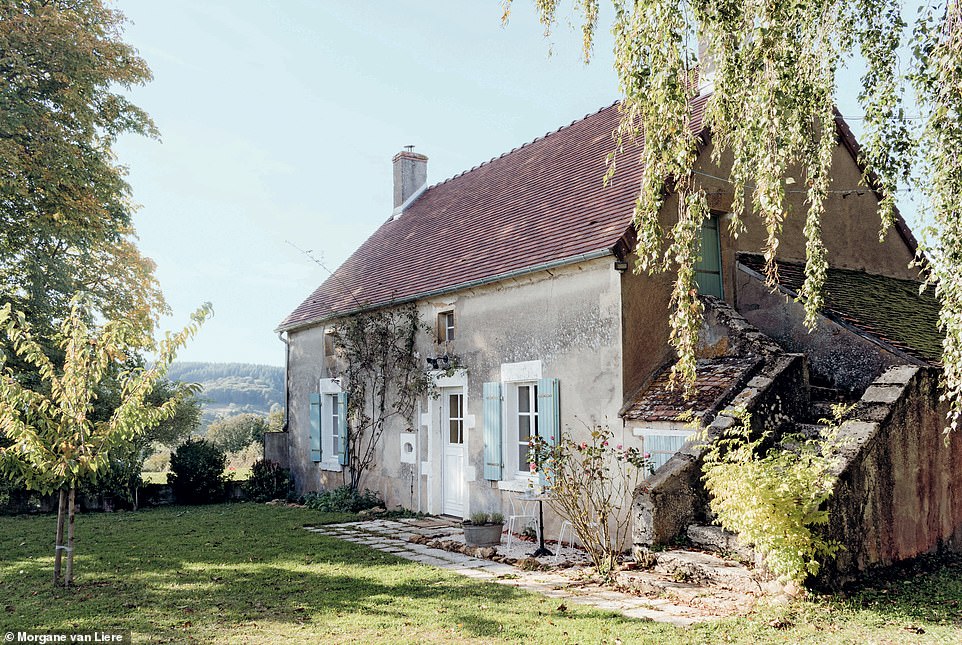 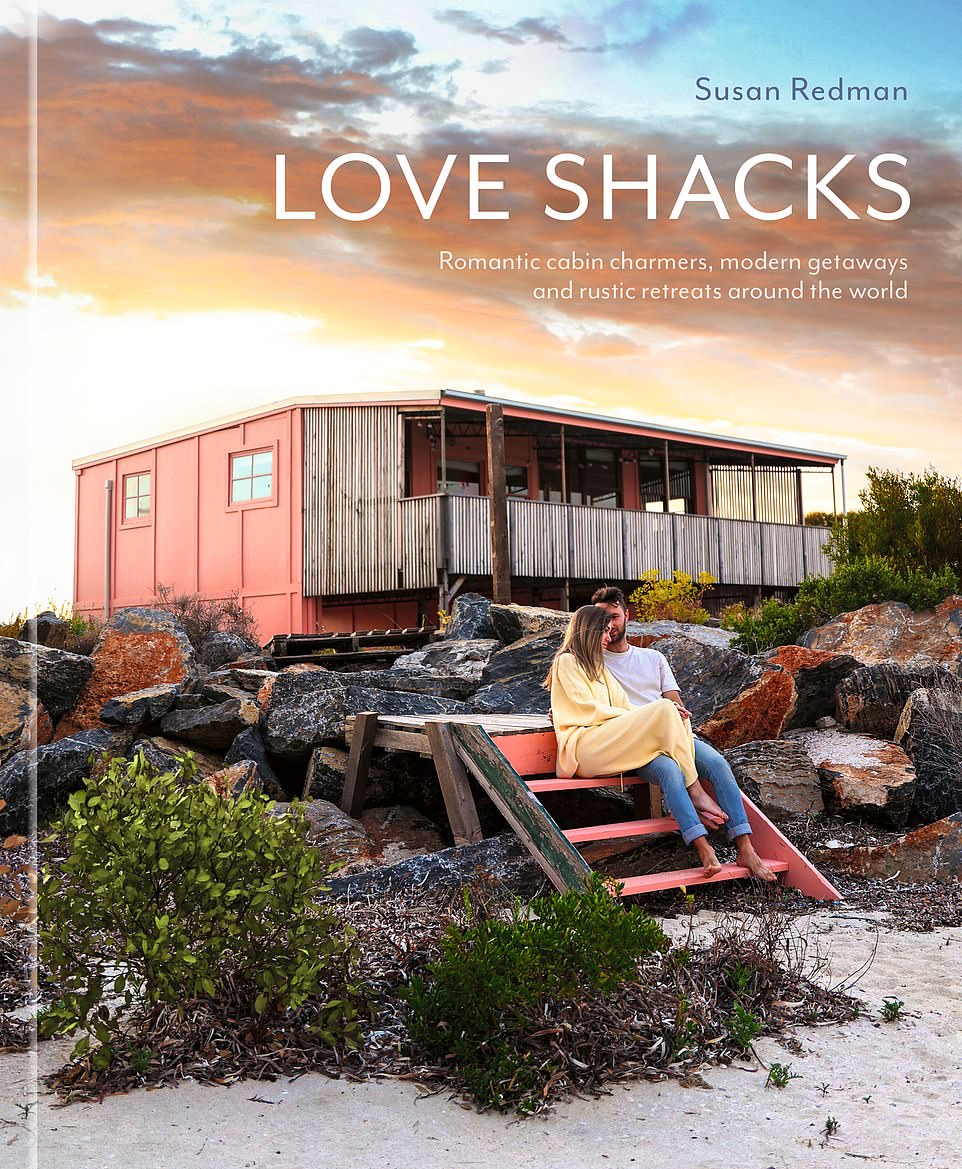 Love Shacks by Susan Redman, published by Images Publishing, is on sale from January 2023. It’s available for pre-order now, priced at £34