A new book by four academics has claimed that women are spending 200 hours more a year doing ‘office housework’ than men.

The No Club: Putting a Stop to Women’s Dead-End Work says that women are expected to do more ‘non-promotable tasks’ than their male counterparts – including fetch coffee, train junior staff, and organise leaving dos.

As such, the American-based authors  – professors Linda Babcock, Lisa Vesterlund, Brenda Peyser and Laurie Weingart – argue this is one of the main factors holding women back from advancing their skills or career, reported The Times.

They are encouraging female employees to ‘say no’ to ‘office housework’ after analysing workers at unnamed professional service firms and finding women on average were unwilling to decline the jobs due to ‘guilt or anxiety’.

They found that senior and junior women spent 200 more hours per year than the average male employee on non-promotable work — equivalent to about a month’s labour.

In their book, the academics insist female workers should create ‘No clubs’, places to get advice and pep talks from female friends and colleagues to help them ‘say no’ to ‘non-promotable’ work.

The No Club from left to right: Laurie Weingart, Lise Vesterlund, Linda Babcock, and Brenda Peyser. The four academics argue that women are spending too much time on ‘non-promotable tasks’

They say female staff are spending too much of their working day completing tasks such as sitting on committees, taking notes and training junior colleagues, in addition to what they coin as ‘office housework’ such as getting coffees, organising leaving dos and sorting out birthday cakes.

Jobs of this kind exist in all types of employment, they claim. For example in schools female teachers tend to be expected to do more classroom work whilst male staff accrue more time for managerial tasks, which enhance their chances of promotion.

Babcock, 60, the James M Walton professor of economics at Carnegie Mellon University in Pittsburgh, Pennsylvania, said these tasks are ‘invisible,’ explaining that many places of work don’t even notice them. 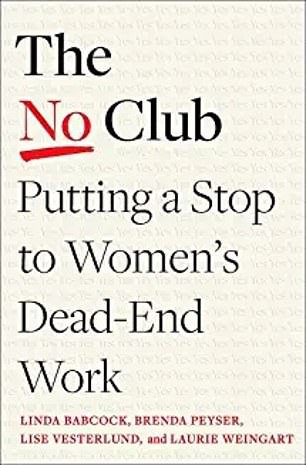 The No Club: Putting a Stop to Women’s Dead-End Work (above)

Vesterlund, 55, a professor of economics at the University of Pittsburgh suggest women were doing this work not because they were better at it or actually enjoyed it but because employers and colleagues expected them to.

The book claims that bosses and colleagues believe that women are not team players if they don’t volunteer for these tasks, but men don’t receive the same censure.

In addition, women are left feeling guilty and anxious if they decline these jobs.

Vesterlund added that women feel stressed and anxious when no one jumps to a task and will end up volunteering themselves, even though they don’t want to do it.

She said: ‘The emotions we see are very different because one gender is expected to come forward, and another one isn’t.’

Professors Babcock, Vesterlund, Peyser and Weingart, a business professor at Carnegie Mellon, created their own No club 12 years ago.

The four were struggling and exhausted with their endless lists of tasks, of which were of no use to their careers, but kept the workplace ticking over.

These tasks took away time from the women that they could have been spending on productive work.

It was Babcock who realised that a male colleague was able to spend more hours doing a research task of which both of them were being evaluated on, while she was attending endless committee meetings.