New coronavirus cases across the United States have started to decline for the first time in five weeks and the average daily toll of 66,000 infections is now the lowest it has been in 10 days.

Infections have been surging since early June when COVID-19 started spreading rapidly throughout the Sunbelt states and the US recorded single daily highs of more than 77,000 infections.

The US is now showing early signs that surging case numbers may be leveling out with week-over-week tallies showing infections have dropped two percent for the first time after rising steadily for five weeks.

The seven-day average for daily infections this week is now just under 66,000.

There has now been more than 4.29 million infections recorded across the United States and nearly 148,000 Americans have died from COVID-19.

The downward trend in cases is prominent in the hotspot states of Florida, Texas, Arizona and California where governors and local officials rolled back reopenings to curb the infection rate.

But even as cases start to plateau in those hard-hit states, 22 other states are currently seeing an increase in new infections.

New coronavirus cases across the United States have started to decline for the first time in five weeks. The downward trend in cases is prominent in the hotspot states of Florida, Texas, Arizona and California. But even as cases start to plateau in those hard-hit states, 22 other states – mostly in the Midwest – are currently seeing an increase in new infections 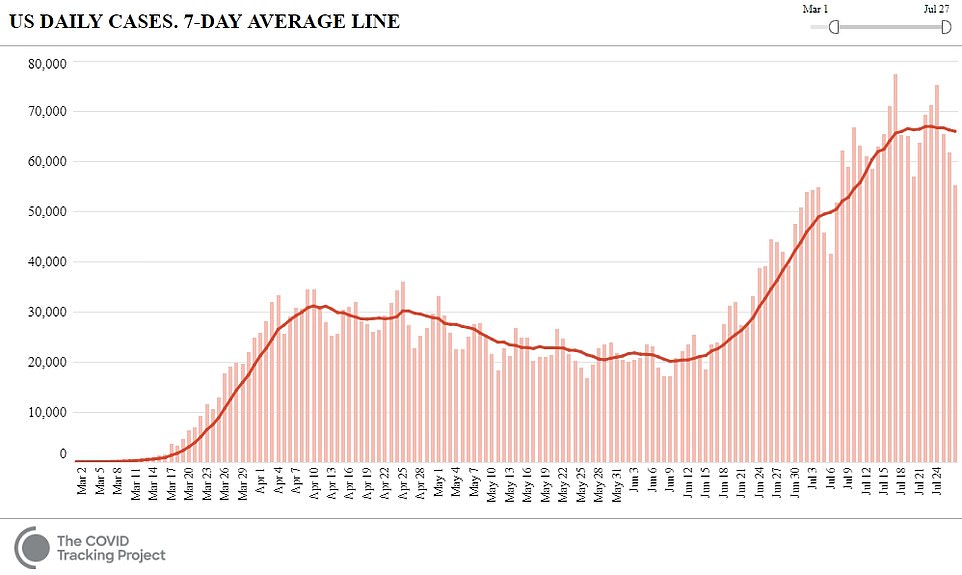 The US is now showing early signs that surging case numbers may be leveling out. The seven-day average for daily infections this week is now just under 66,000 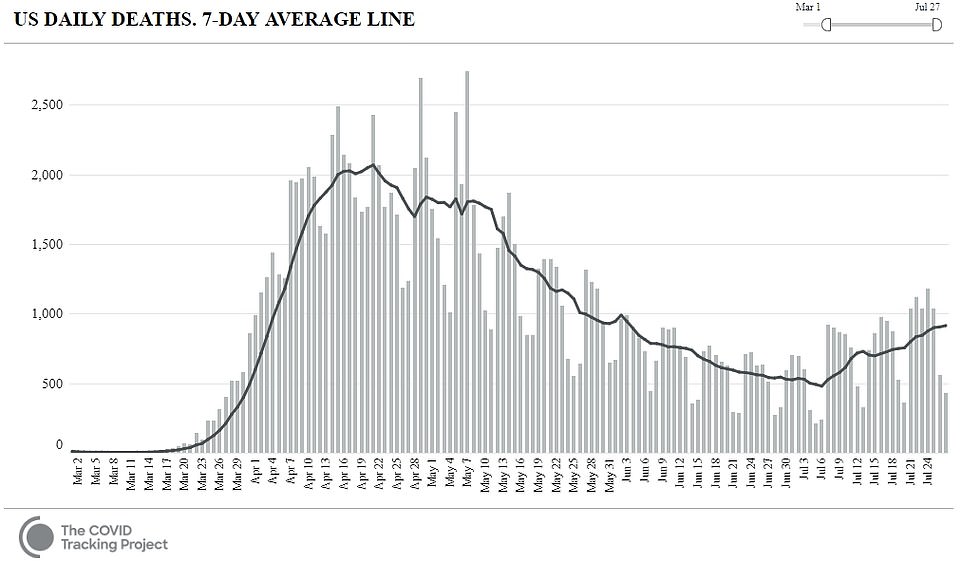 Deaths across the US have risen for the third straight week with 15 states reporting weekly increases in fatalities for at least two consecutive weeks. Deaths are a lagging indicator and can continue to rise weeks after new infections drop

Twenty states are seeing steady case numbers and eight states saw decreases in the number of infections in the last week.

Cases are mostly rising in the Midwest, which public health officials say is a sign the virus is spreading north from the Sunbelt states.

Infections also surged this week in some Northeastern states, like New Jersey, where infections fell after peaking in April.

Meanwhile, deaths across the US have risen for the third straight week with 15 states reporting weekly increases in fatalities for at least two consecutive weeks, according to a Reuters tally of state and county reports.

Even those deaths are rising across the US, they remain well below levels seen in April when an average of 2,000 people a day were dying from the virus. 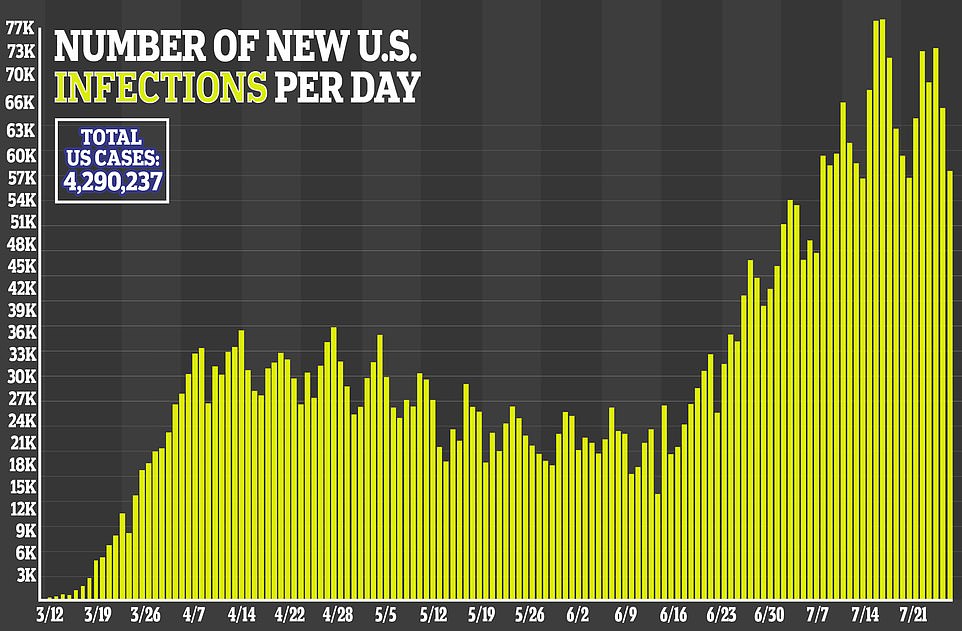 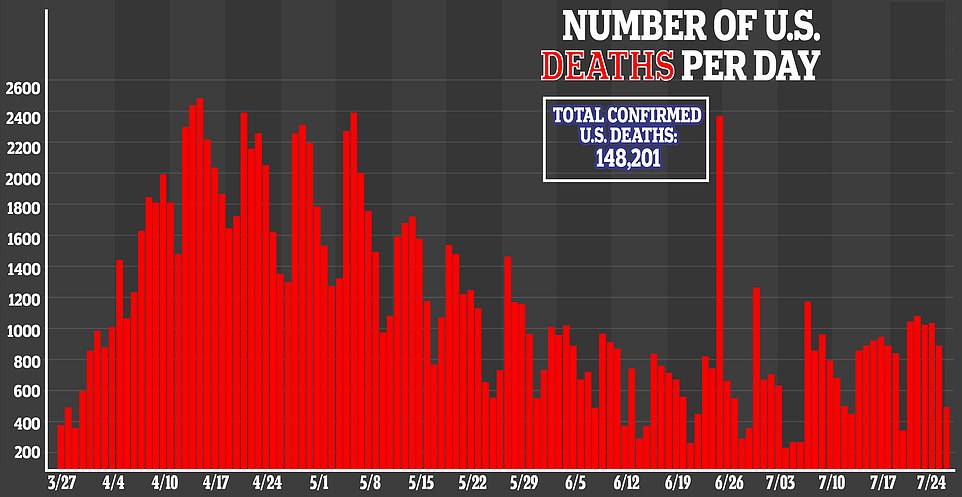 It comes as Dr Deborah Birx, the head of the White House COVID-19 taskforce, continued to urge states with rising infections to close bars, cut back on indoor dining and to mandate face masks in order to stop the spread of the virus.

She said the surge in cases that has plagued Sunbelt states since Memorial Day is now being seen elsewhere, which is a sign that the virus is now spreading North.

The states with rising cases should be closing bars, cutting back on indoor restaurant capacity and limiting social gatherings to 10 people, Dr Birx warned.

She also said all Americans should be wearing masks when out in public or around other people.

‘We can see what is happening in the South moving North,’ Dr Birx said. ‘We do believe there are states that do need to close their bars.’

‘Until you can see that explosion, it’s hard for people to understand how deeply you have to clamp down,’ Dr Birx said.

‘That’s why we called out the next set of cities where we see early-warning signs, because if you make changes now, you won’t become a Phoenix.’

The number of new infections in Florida, Arizona and Texas now appear to be trending downwards for the first time since late May or early June. Deaths, however, are still rising in both Florida and Texas. While deaths have seen single daily highs in Arizona in the past week, average fatalities appear to show a leveling out

Health and Human Services Secretary Alex Azar said people ‘stepping up to the plate’ is the reason for some of the ‘plateauing’ in coronavirus cases being seen in Arizona, California, Florida and Texas.

In an interview Monday on Fox News’ Fox and Friends, Azar said officials think ‘it’s due to the fact that people are actually wearing their masks.’

He said they’re also social distancing and practicing good hygiene, and he complimented governors for closing bars, where it’s difficult to be socially distant and wear a mask.

‘So people are stepping up to the plate and doing what we’re asking and what the governors are asking and we see it has an impact,’ Azar said.

‘While Dr Birx says we’re seeing signs of plateauing, we’re not out of the woods yet,’ he said, adding that next few months would be crucial.

As the pandemic has spread from the original epicenter of New York to the South and West, officials have clashed over how to ease lockdowns.

Hostility to the idea now appears to be dwindling, including from the Republican administration of President Donald Trump, who once dismissed mask-wearing as an effort to be politically correct.

Trump, who faces falling poll numbers over his handling of the health crisis ahead of the November election, has long refused to wear a mask in public but last week encouraged Americans to do so.