New data shows worst places in the UK for pickpocketing

Britain’s worst pickpocketing hotspots have been revealed, after new data from across the country shows how police are struggling to cope with the latest crimewave.

London is the worst area in the country as the Metropolitan Police recorded 195,368 theft from the person crimes (TFPs) between January 2013 and December last year.

Lincolnshire Police was ranked second worst as it recorded 10,440 TFPs over the same period, amounting to 140 for every 10,000.

The information was obtained under the Freedom of Information Act to more than 40 police forces across Britain, to help pinpoint where people are most likely to fall victim to thieves.

Greater Manchester Police recorded 105 crimes per 10,000, followed by West Yorkshire with 91 and Thames Valley Police with 71.

The lowest number of pickpockets was recorded by Dyfed-Powys Police, which patrols Carmarthenshire, Ceredigion and Pembrokeshire, as just seven for every 10,000 residents were recorded.

Second safest was North Wales Police and Surrey, who were tied on just 16 TFP per 10,000 people.

MailOnline has complied a table which lists all the police forces which provided information about THP crimes.

You will be able to check the police force area you live in and cross reference it with population data to see how likely you are to the victim of pick-pocketing.

A spokesman for the Metropolitan Police said: ‘The figures need to be taken in context with the exceptionally high number of tourists who visit the capital. The tourist figures are not included but will drastically reduce the amount of thefts per person in London.

‘Our Neighbourhood Policing Teams employ many tactics to deter pickpocket and theft offences, and work alongside businesses, partners and the Local Authority’s. In some specific Business Improvement Districts,

‘Officers monitor shop link radios, share intelligence, deliver crime prevention advice and utilise both plain clothes and high visibility patrols. In areas of high footfall, we have made excellent use of Behavioural Detection Officers. These Officers are specifically trained to detect persons engaging in criminal activity.

‘We also make use of Dot Matrix signage, and CCTV vans when appropriate, and encourage Officers to make direct interventions when they see open bags or easy access to property. Schools Officers across the BCU’s advise pupils about personal safety and keeping belongings safe.’

Chief Superintendent Peter Roderick, from Dyfed-Powys said: ‘Our force area is made up of close knit communities and we pride ourselves on having a good relationship with the public we serve. The four counties served by Dyfed-Powys Police are amongst the safest nationally and we continue to work hard to ensure that it remains a safe place to live, work and visit.

‘I would encourage anyone who is a victim of crime across our area to contact us and ensure that their experience is recorded, investigated and most importantly, that they are given the support they may need and deserve.’

The Metropolitan Police have been clamping down on pickpockets in hot-spot areas like Oxford Circus and on the London Underground. 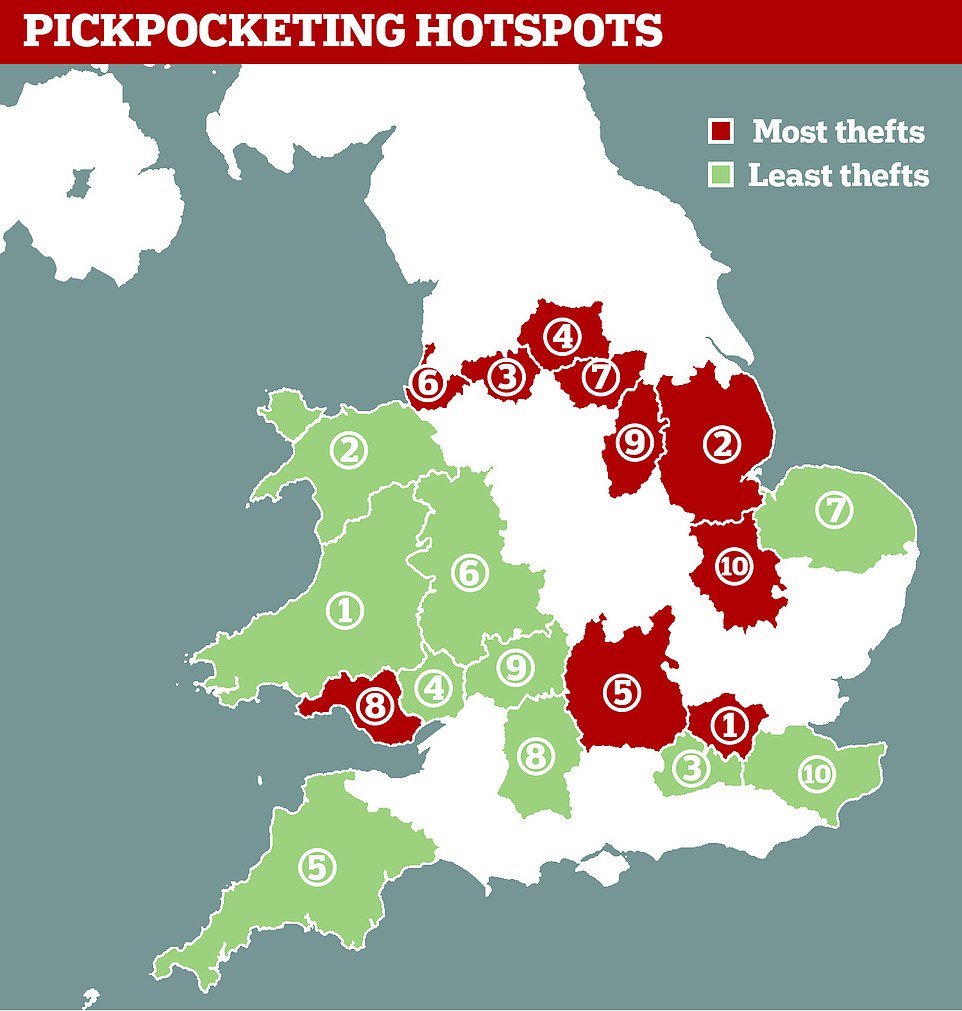 The worst areas in the UK are in red, while those in green are among some of the safest in the UK when it comes to pickpocketing 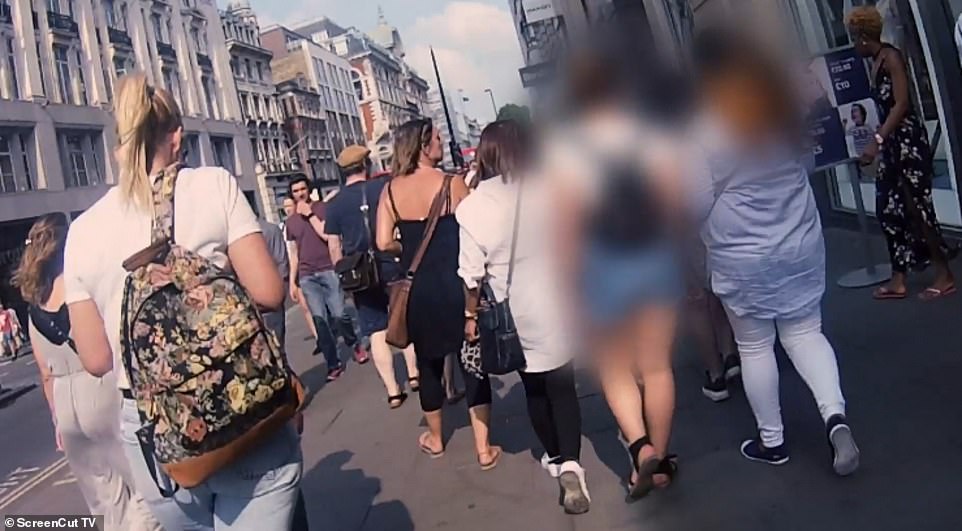 The three women – two with their faces blurred and one in a white shirt with a black bag, are seen on camera approaching their victim from behind before the attempted theft 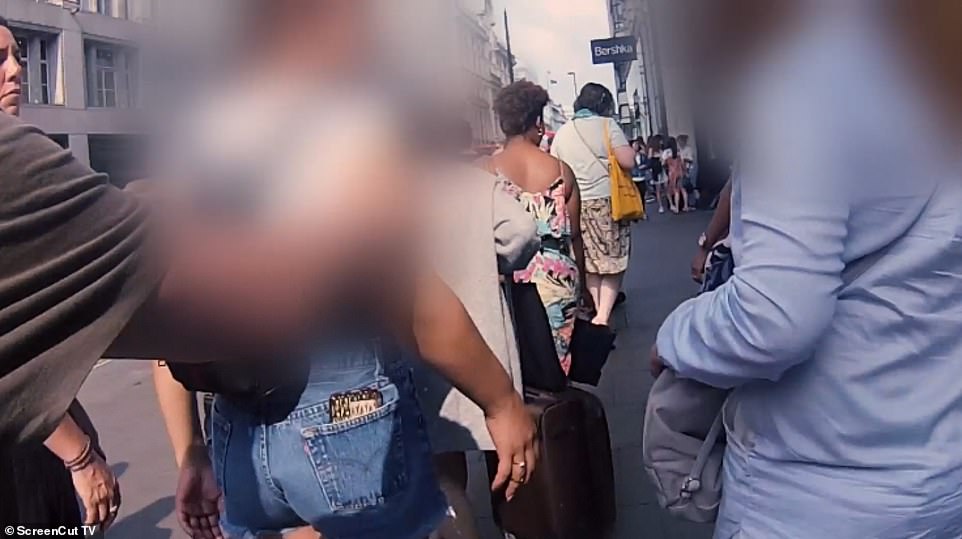 But Met Police officer Sergeant Steve Stamp catches them in the act, and arrests them

Dramatic body-cam footage released by the force shows the moment an undercover police officer swoops on a gang of pickpockets as they try to swipe a purse on Oxford Street.

The three Bulgarian women surround their victim as they attempt to dip their hands into a handbag in London’s famous shopping district.

The attempted theft came just minutes after they failed to rob a tourist as she walked along the street.

Sergeant Stamp, who patrols the area and targeting shoplifters and pickpockets, added: ‘They have gone for that first lady there, tried to take something from her.

‘She spotted them so they’re on it. They then move from her, they follow this lady here, straight away they are working up close.

‘She’s gone for the purse, tried to open it up before she has turned around and realised. Then she’s clocked us, so we have had to go in for the kill. Three criminals taken off the streets. Job done.’

In October, MailOnline revealed shameless begging gangs are making children as young as three hug strangers in the street until they hand over cash.

James Brown, director of gadget insurance provider Protect Your Bubble comments: ‘While it is not exactly a surprise to see the sprawling metropolises of London and Manchester topping this list, it is interesting to see Lincolnshire being ranked so high.’

‘For the force to have recorded so many of these thefts, but have such a comparatively low population, suggests there are pickpockets aplenty operating in Lincolnshire.

‘Residents in this force area should take extra care when walking around with valuable, uninsured belongings, especially phones, tablets, laptops and jewellery.’