A group of former Silicon Valley-based tech company employees have created a new dating app for the LGBTQI community so users can side-step one night stands and the risk of getting catfished, and find true love instead.

The app, which is named Taimi, is part social network, part online matchmaker, however what its founders are ultimately aiming for is an online community that can provide support and advice to its LGBTQI members.

‘The true inspiration was the inability to stand discrimination in the first place. Our society has made a tremendous progress in tolerance and acceptance, but we definitely cannot state that any community or any workplace is completely inclusive,’ suggests Alex, one of its founders.

New direction: Taimi, a new dating app for the LGBTQI community, is hoping to end the culture of casual hook ups and users getting catfished by focusing on long-term connections instead

‘Moreover, out of 50 States, only 22 and the District of Columbia prohibit employment discrimination on the basis of sexual orientation. For me, those were only statistics until my friends and I faced that career discrimination first-hand,’ he added.

While Alex admits his superiors never explicitly told him he wasn’t being promoted because he is gay, he believes the behaviour of his supervisors implied that he would never get ahead because of his sexual orientation.

‘That is why we decided to go solo and create something that could help LGBT+ community,’ he explained.

‘We took a hard look at the potential products and decided to create something unique. Thus, we combined dating app and social media. Our users receive an opportunity to express themselves in a safe and hatred-free environment.’

Another part of his reasoning for starting the app comes from his own experience of using dating apps and finding them lacking because they only concentrate on fostering short-term connections: ‘I was quickly fed up with all the guys who were looking for one-night stands.

‘No matter which [app] I used, it was incredibly hard to meet someone ready for at least a glimpse of a commitment. It was annoying.’

And although he acknowledges that Taimi’s applications won’t necessarily prevent one-night stands or negate the hook-up mentality, he hopes the platform will facilitate those who are looking for true love and friendship in a way the other apps can’t.

‘If there will be one app saying, “Hey, people here are serious about meaningful dating”, finding Mr. Right would be much easier,’ he suggests. 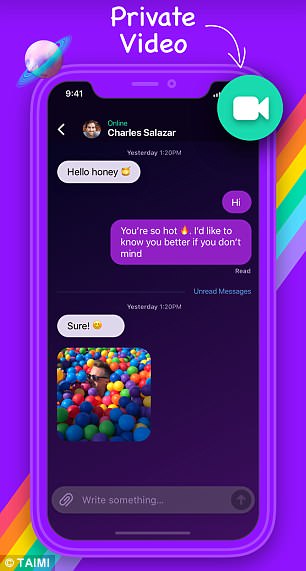 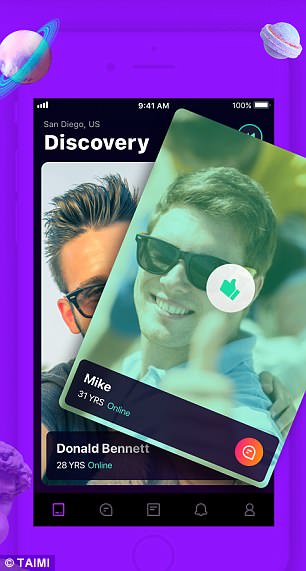 Features: The app doesn’t just offer dating features – it provides information and tips on healthcare and even offers workout videos 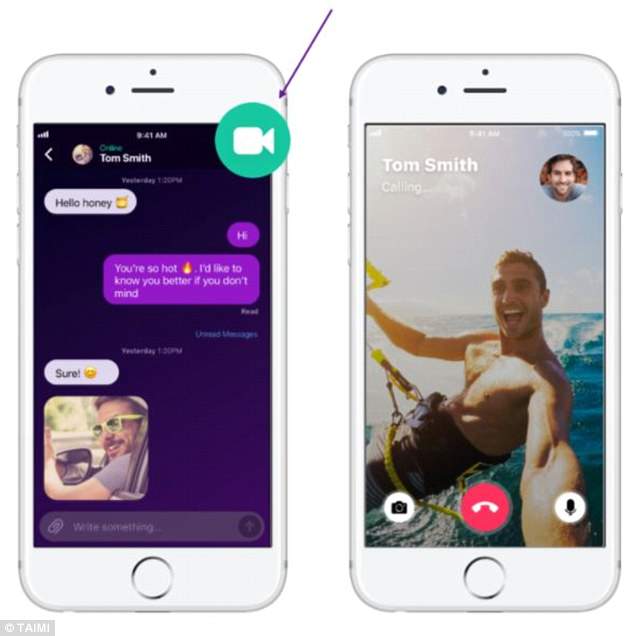 Lets get visual: The app’s video call feature, the first of its kind on the market, allows users to see each other before meeting up

Another one of the features the founders are keen to highlight is the app’s video call feature, the first of its kind on the market.

‘The ability to make a phone call to your match stands out because, firstly, it is an innovation for online dating industry and, secondly, it is a real ability to reassure yourself you are talking to a real person, Alex explains.

If there will be one app saying ‘Hey, people here are serious about meaningful dating’, finding Mr. Right would be much easier

‘We already have much feedback from users that video calls on Taimi make them feel safer indeed. Together with profile verification, it is the most efficient way to ensure that our users do not get catfished and do not find themselves in dangerous situations after meeting with a guy from a dating app,’.

The app is also bringing sexual health to the forefront of its agenda and hopes to fully launch all of its proposed health features by September.

These include an in-built calendar to remind users of important medicines or tests that need to be taken. There will also be an advice service, created in cooperation with qualified doctors, and the app will also offer online workouts and tutorials to help users stay fit.

And while Taimi is currently for gay men only, with the founders noting, ‘We started with gay men dating because this is the area that is close to us personally,’ the company has plans to open it up to the rest of the community.

‘We want to expand our audience by giving women and transgender people opportunity to join Taimi community and find their love,’ Alex adds.

‘In the end, we want to create a platform for all LGBT+ people worldwide where they would be able to communicate, form relationships, and feel safe to be themselves.’