The front row of the Dior Paris Fashion Week show was packed with the rich and the famous on Friday as the new CEO of Dior and billionaire Delphine Arnault joined her wealthy friends to watch the runway presentation, her first since taking over the role.

The fashion guru is the heiress of the world’s richest man Bernard Arnault who boasts a £145 billion fortune and is the founder of LVMH. While Delphine has not reached her father’s levels of financial freedom she still has a respectable £5 million net worth of her own.

By the businesswoman’s side were the likes of David Beckham, who boasts a £363 million net worth, Eddie Redmayne, who has £12 million, and Robert Pattinson, with £80 million.

Delphine, 47, caught the eye in a red jacket and black trousers while sat ibetween David r, also 47, and Eddie, 41.

Looking suave in a brown suit, the actor cosied up to his publicist wife Hannah, 40, who put on a chic display in a black blazer and jeans while Karlie Kloss, 30, cut an elegant figure in a cream blazer suit.

To her right was Cruz Beckham, 17, cutting a chic figure in a grey suit, coordinating with his dad David, while Gwendoline Christie, 44, went for a plaid suit.

Robert – who features in Dior’s latest ad campaign – donned a faux fur jacket and navy tweed skirt. She may not have been sat with Delphine and her pals, but Naomi Campbell put on a show-stopping display in a grey coat.

Delphine, the the new boss of Christian Dior, is hardly a stranger at the French luxury fashion house she will now run. 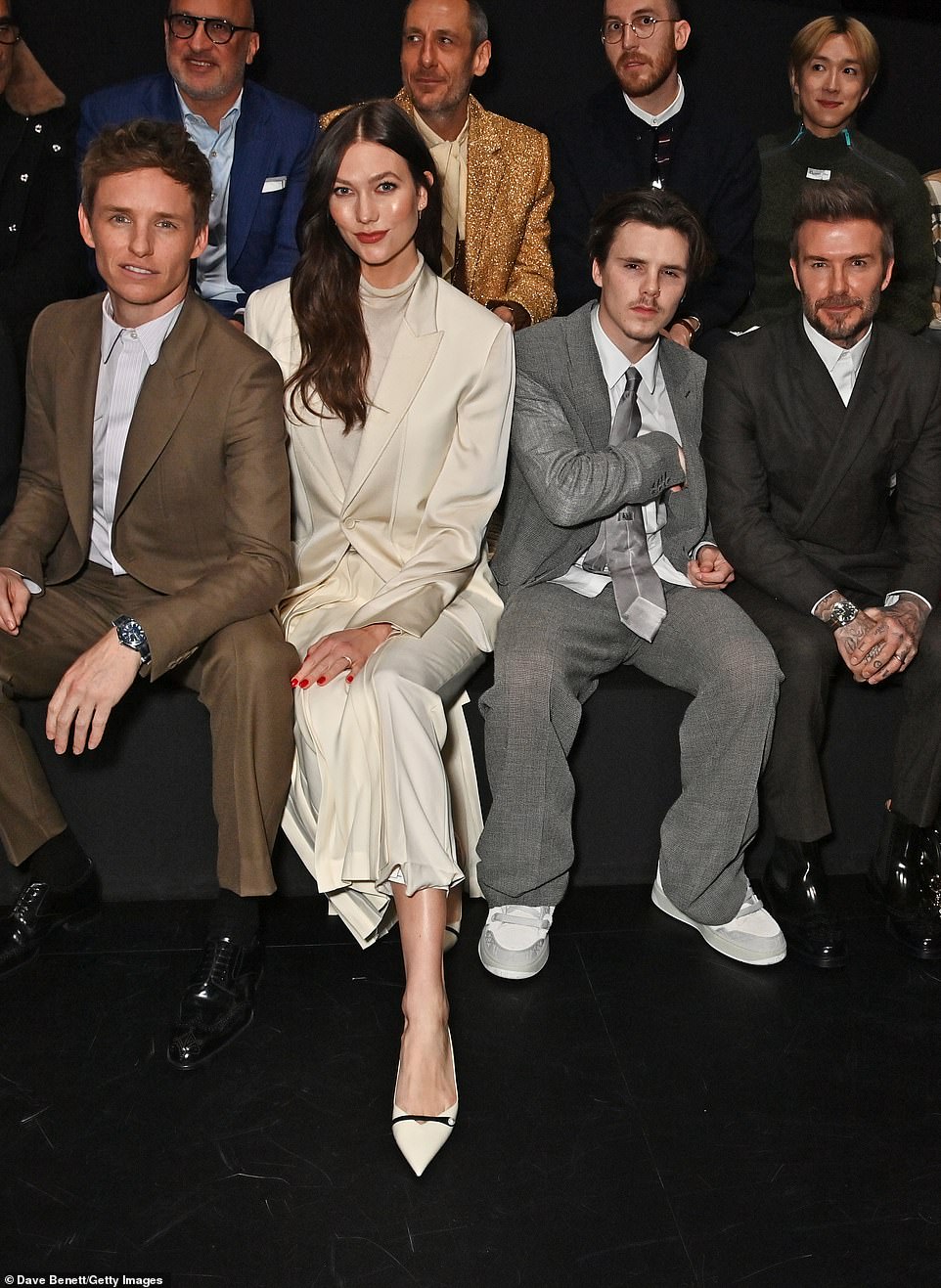 Stars: Cruz Beckham, 17, cut a chic figure in a grey suit, coordinating with his dad David (both right) 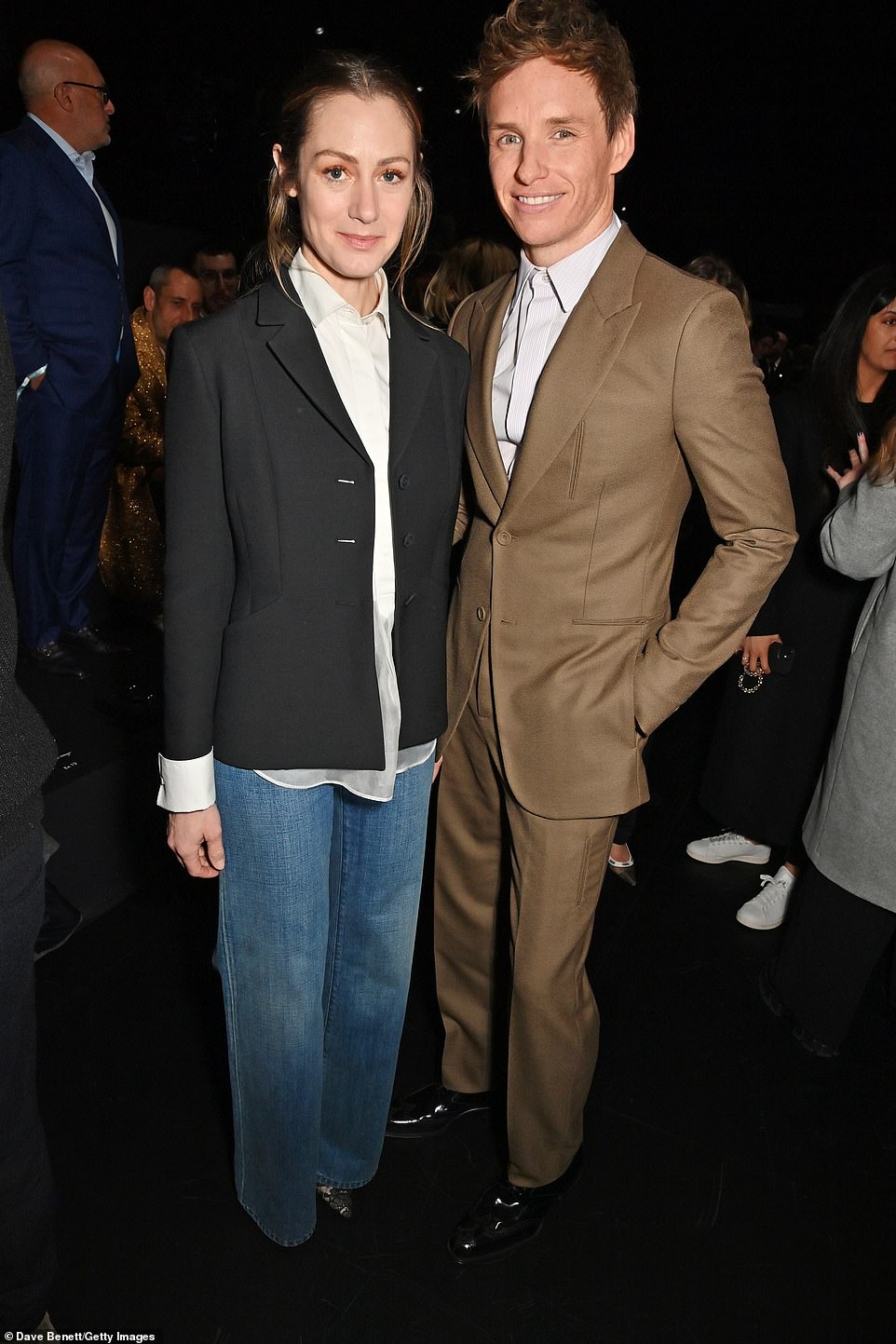 Couple: Looking suave in a brown suit, Eddie, 41, cosied up to his publicist wife Hannah, 40, who put on a chic display in a black blazer and jeans while Karlie Kloss, 30, cut an elegant figure in a cream blazer suit

For the heiress, whose promotion was announced last week, just happens to be the daughter of the owner.

Bernard Arnault is the world’s richest man, with a £147billion fortune. He is the co-founder and chairman of the LVMH conglomerate that owns the Louis Vuitton, Moet and Hennessy brands as well as Dior.

Mr Arnault has appointed Delphine, oldest of his five children, as his heiress apparent as he tightens the family’s grip on the £345billion luxury goods empire. 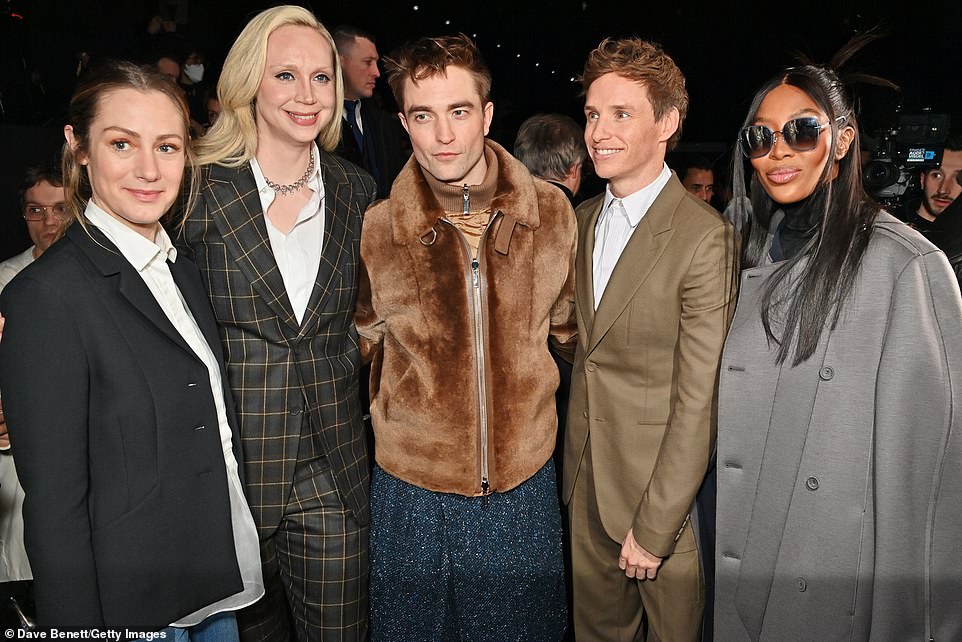 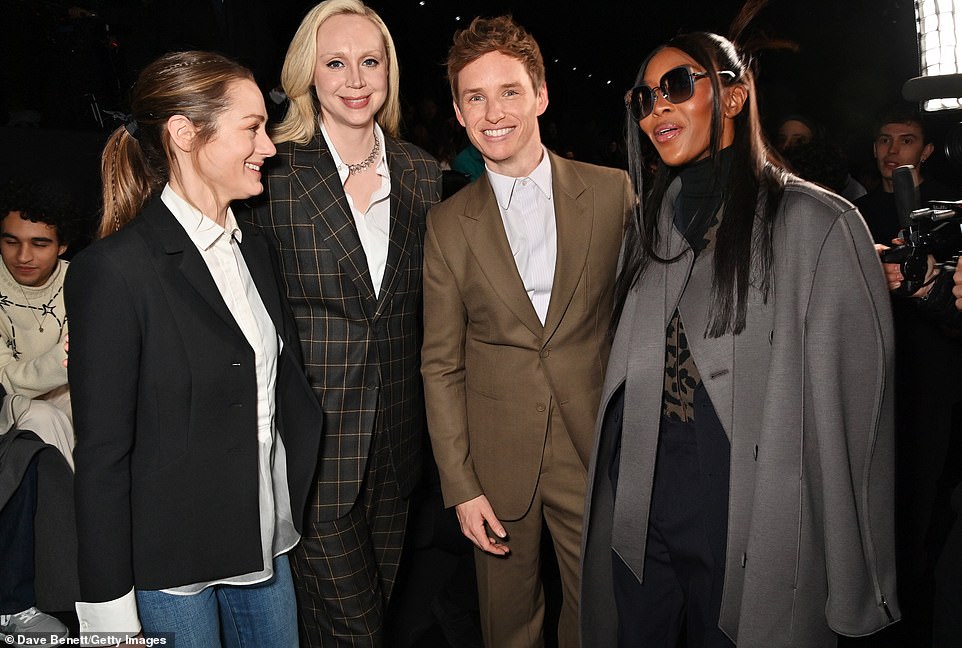 Chic: She may not have been sat with Delphine and her pals, but Naomi Campbell (far-right) put on a show-stopping display in a grey coat 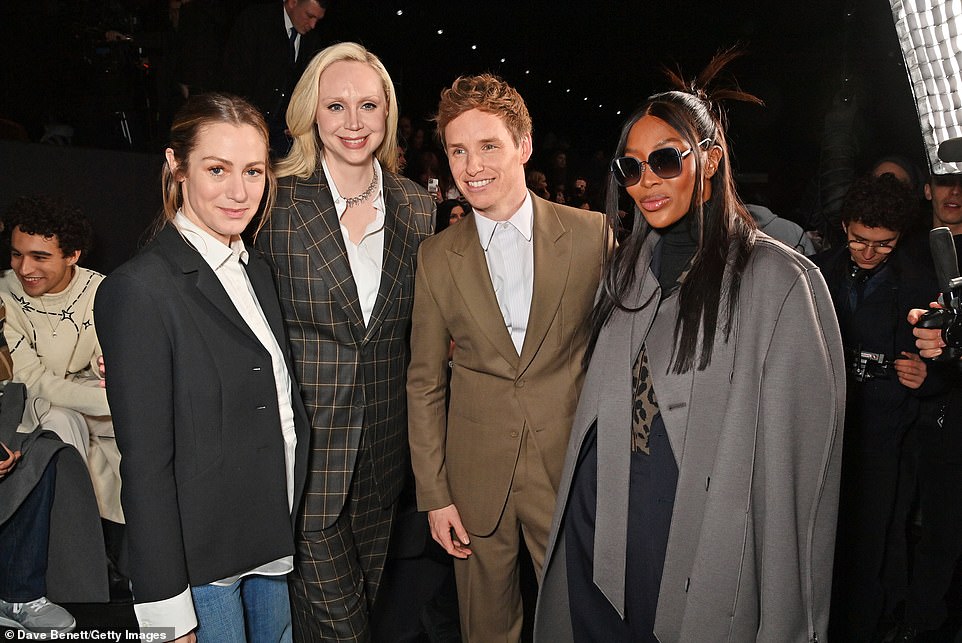 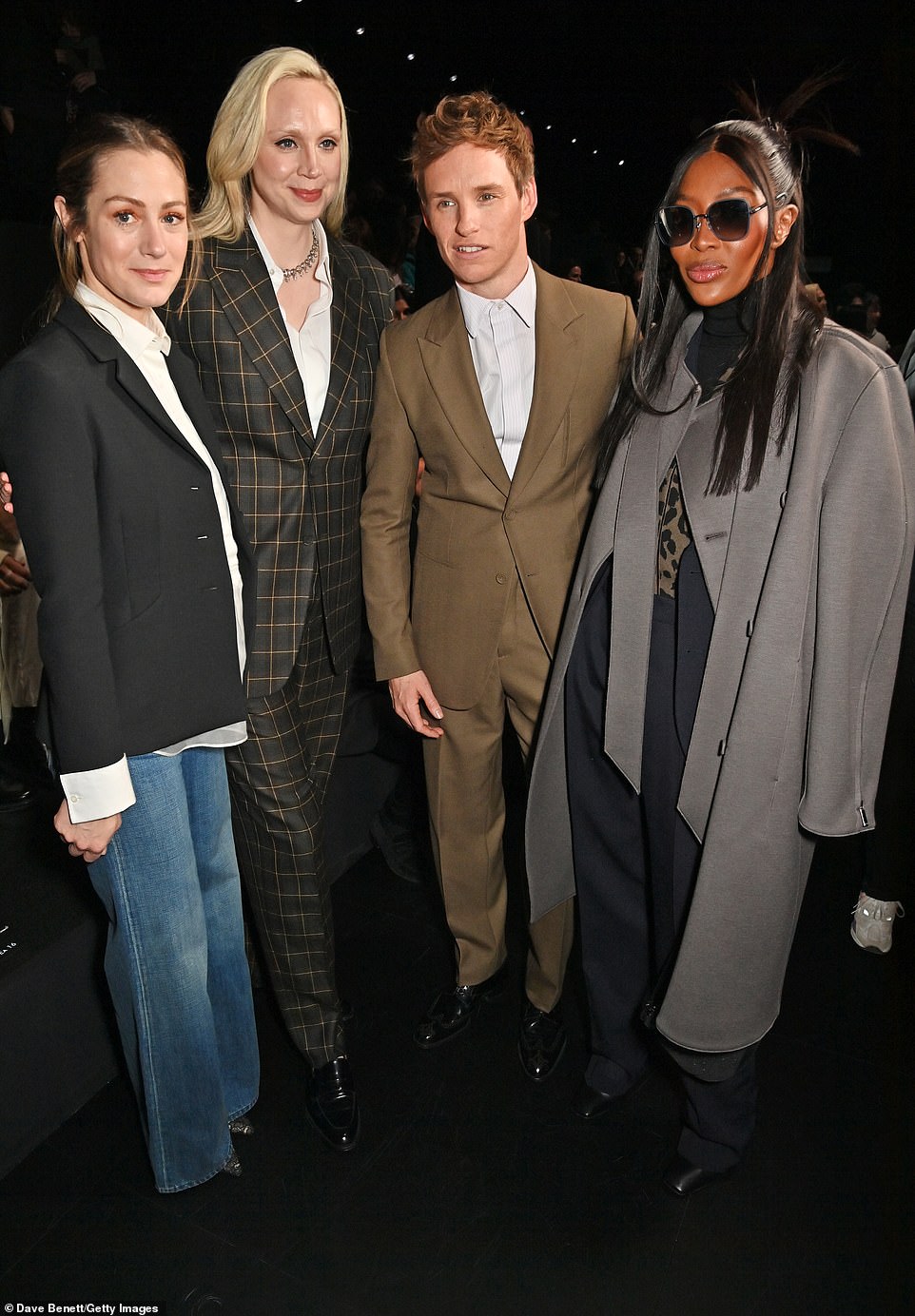 However, the man nicknamed ‘the wolf in cashmere’ for his ruthless approach has signalled he has no intention of standing down soon – the group recently raised its age limit for chief executives from 75 to 80.

All his children have major roles at the firm’s brands.

Mother-of-two Ms Arnault, who begins her new role on February 1, has been executive vice-president of Louis Vuitton since 2013 and was previously Dior’s managing director.

A highly-respected, serious, and extremely hard-working businesswoman, Delphine has degrees from graduated from EDHEC Business School in Lille and the London School of Economics, where she was head of student organisations.

She grew up mostly in Lille, but spent three years in the US when her family moved to New York.

She received her first Louis Vuitton bag, a brown Noe handbag, for her 18th birthday.

Her career began in the late 1990s at consultancy firm McKinsey, where she worked for two years, and she moved to Dior in 2000.

She previously told how the fashion world was a natural fit for her, telling W magazine: ‘I’m lucky that it’s about fashion and perfume and cosmetics.

‘If my father had owned a tire company, I don’t know what I would have done.’

She was credited with keeping the brand afloat in 2011 following widely publicised revelations of an anti-Semitic outburst in Paris by its British creative director John Galliano that led to his sacking.

In an interview with the Financial Times, Ms Arnault described her managerial style as ‘quite calm’.

But she added: ‘I’m very competitive. At everything. I like competition, it’s fun.’

And in 2014, she set up the prestigious LVMH young fashion designer award.

According to a W magazine profile of the businesswoman, it can be ‘hard to know what she is thinking’ but she is ‘courteous and pleasant.’

Meanwhile she is exceptionally low-key about her private life, rarely giving interviews and when she does so, often avoiding personal topic.

Her first marriage came in 2005, when she tied the knot with Alessandro Vallarino Gancia, heir to an Italian wine dynasty. 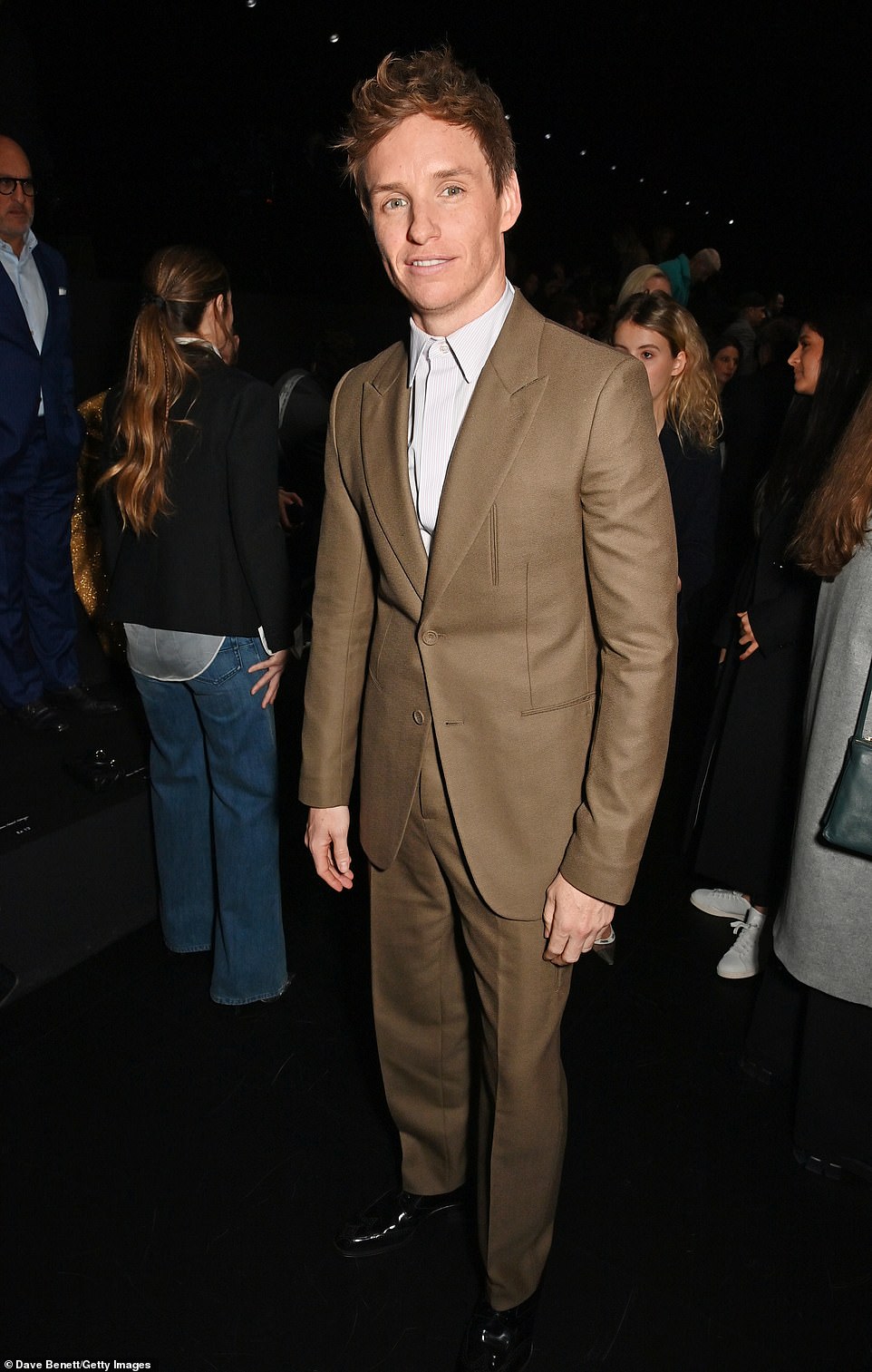 Smart: Eddie ensured to look suave with his get-up 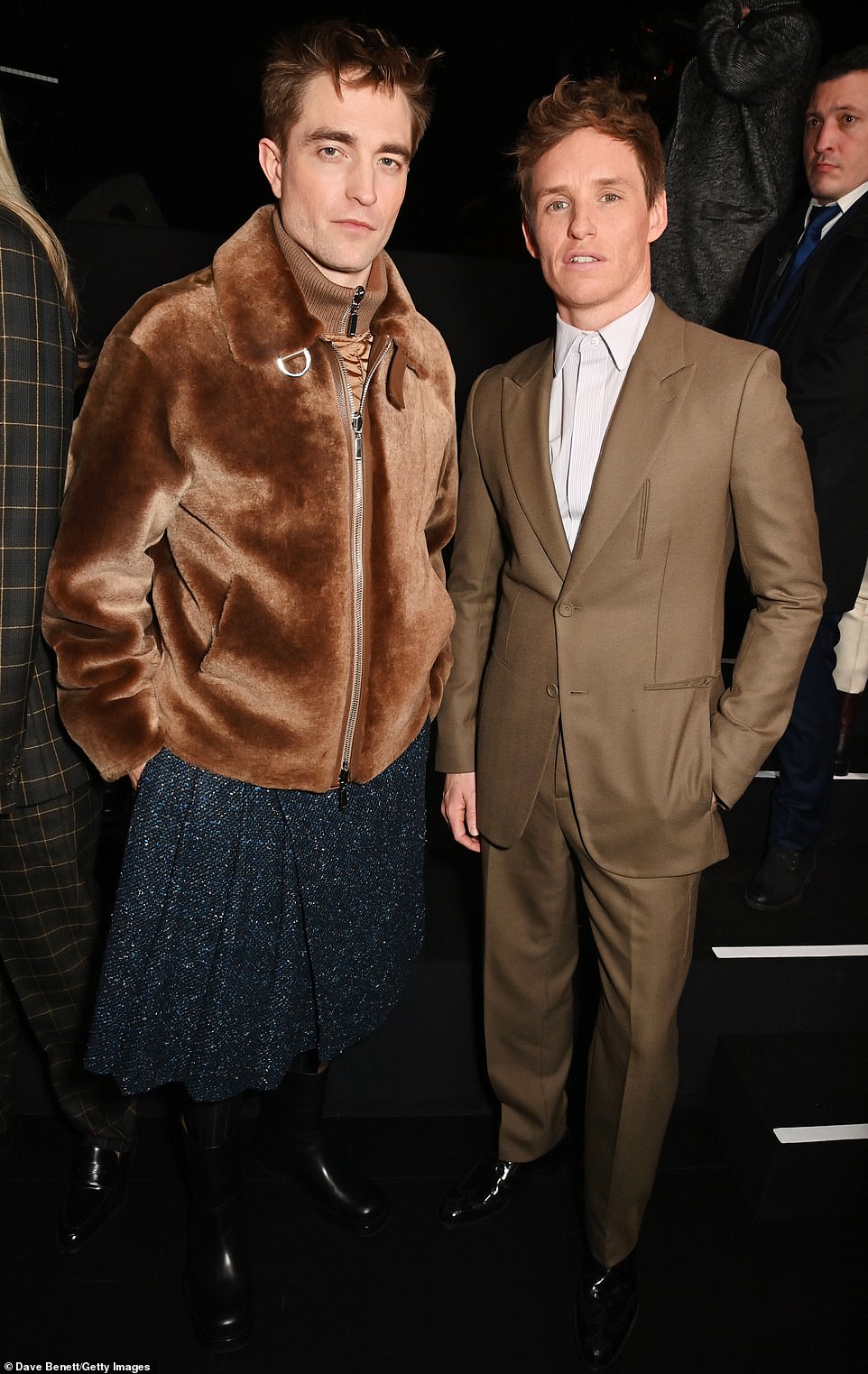 Pals: Eddie (right) made friends with Robert (left) at the event 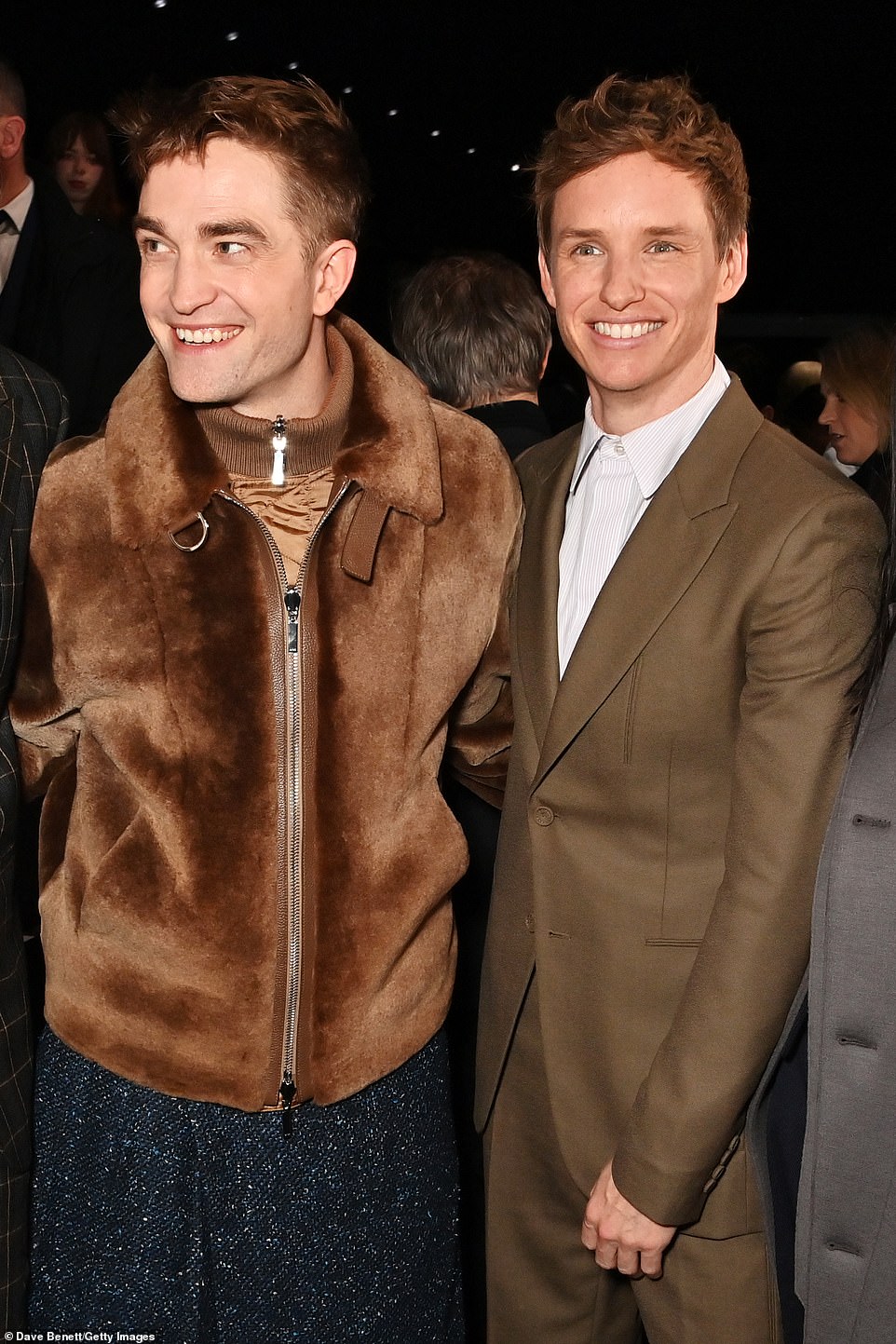 Happy: The beaming actors appeared to be in high spirits 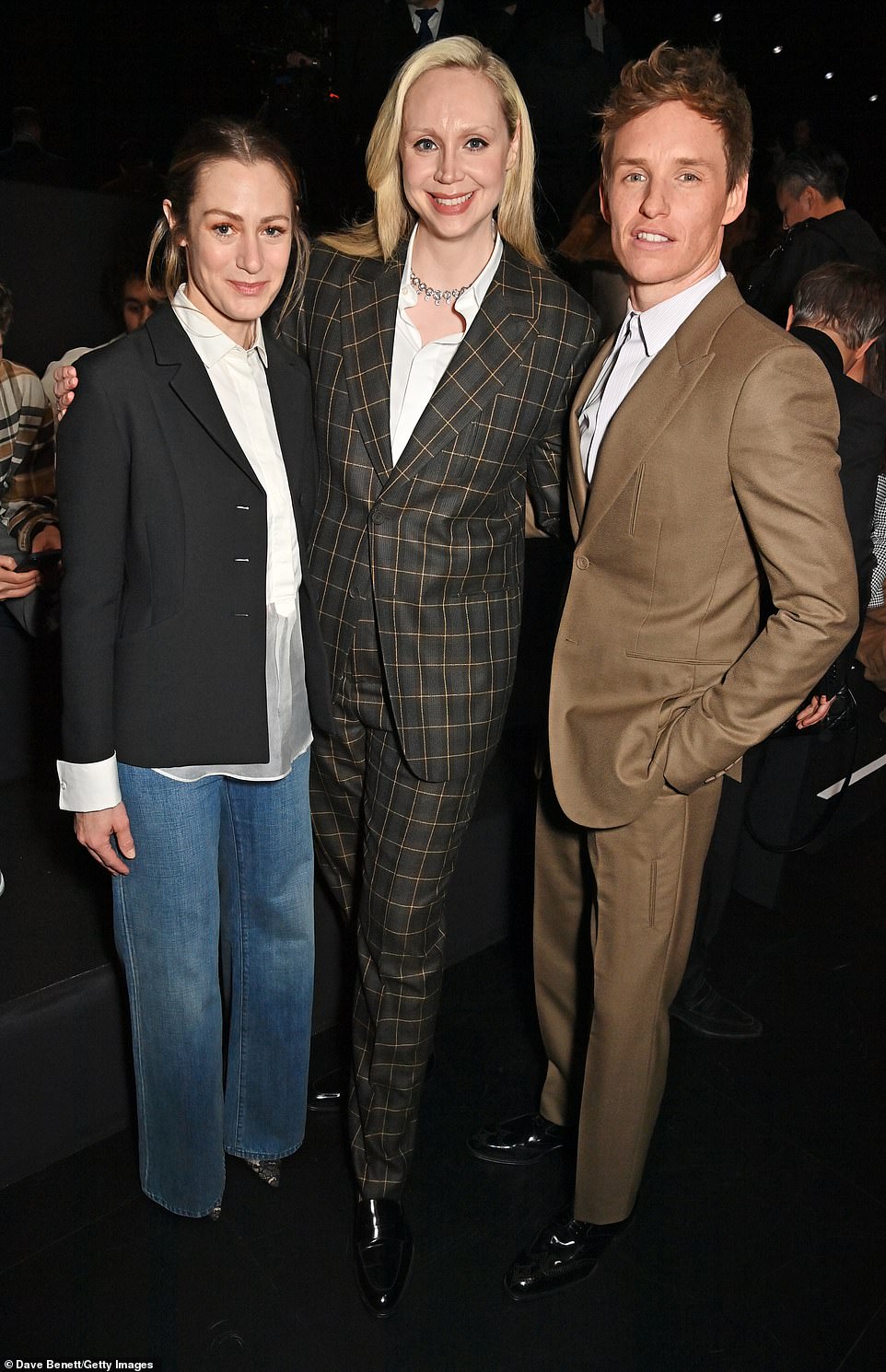 Delighted: Hannah, Gwendoline and Eddie (L-R) looked delighted to be there

Her wedding was a significant event for the French elite and was named by Harper’s Bazaar magazine as the wedding of the year.

She wore a gown designed for her by Galliano which took 1,300 hours to make.

The couple divorced five years later and she is now in a relationship with French billionaire Xavier Niel.

Xavier, who is almost a decade older than his partner, is the co-owner of Le Monde newspaper and the 21st richest person in France with an estimated fortune of €8 billion.

In 2013 he spent £41million on a free coding school in Paris as well as nearly £250million on Station F, the world’s largest start-up laboratory that houses 1,000 start-up companies.

And in 2020, he admitted he was a teenage spy who hacked the mobile phone of President Mitterrand.

He is described by many as ‘the French Steve Jobs’.

Ms Arnault, said to be a very private person who dislikes media intrusion, gave birth to her daughter Elisa in August 2012 and her son Joseph in September 2016.

She told FashionNetwork that she tries her best to balance her career with motherhood.

She explained: ‘Whenever I have free time, I spend a lot of time with my family. It’s that simple, that essential.’

She previously told the FT: ‘I’m quite discreet. I think I’d rather focus on my work. So, I only speak when I have something to say. ‘Live hidden, and live happy’.’

She is also said to enjoy a close relationship with her father and is a talented pianist, having played between the age of five and 20.

Meanwhile she has a passion for art, and has quietly assembling her own collection.

She told FashionNetwork.com that she appreciated being born into Arnault family, adding: ‘I have a great opportunity to work for this group. It’s very exciting.

‘I began my career first with Dior, where I worked for 12 years beside Sidney Toledano. Now I work chez Vuitton.

‘I think that I am very lucky to have known this universe from a very young age and that my father has trusted me so much.’

And while Arnault keeps a low profile on social media, her siblings are active on Instagram, offering a glimpse into the family’s luxurious lifestyle.

Delphine and her father have regularly been pictured with the likes of Rihanna, whose company Fenty was founded under the LVMH umbrella, and Paul McCartney.

The family have a host of celebrity friends; tennis fanatic Bernard and his sons are often pictured training with Roger Federer and other snaps show them mixing with Karl Lagerfeld, Anna Wintour and Pharrell Williams.

As would be expected, the jetset family has a large property portfolio and divides their time between a number of the world’s most exclusive neighbourhoods.

Her father’s Arnault’s primary Paris residence, a 17th century mansion, is filled with some of the world’s finest art, according to Bloomberg, including works by Damien Hirst, Andy Warhol, and Pablo Picasso.

He also owns two chateaus in France and another mansion in Saint-Tropez.

In 2000, Arnault purchased Nyn Park, a large estate about 30km north of London and built a 4,300 square metre home.

He also purchased an island of 54 hectares in the Bahamas, with a price tag of $35 million, a Brussels apartment and over 25 wineries around the world.

‘Her keen insights and incomparable experience will be decisive assets in driving the ongoing development of Christian Dior.’

Ms Arnault is also a member of the board of directors of LVMH and of its executive committee.

LVMH has another connection to a fashion boss with a mega-rich father – Sir Paul McCartney’s daughter Stella. The designer has collaborated with the brand on luxury fashion and a skincare range.

Leaders passing the baton to family members is not uncommon.

Last year Marta Ortega Perez took over from her father Amancio Ortega, Spain’s richest man, as chairman of the world’s biggest fashion group Inditex, which owns Zara, Massimo Dutti, Pull & Bear and Stradivarius. She started aged 22 as a sales associate at Zara on the King’s Road in London. 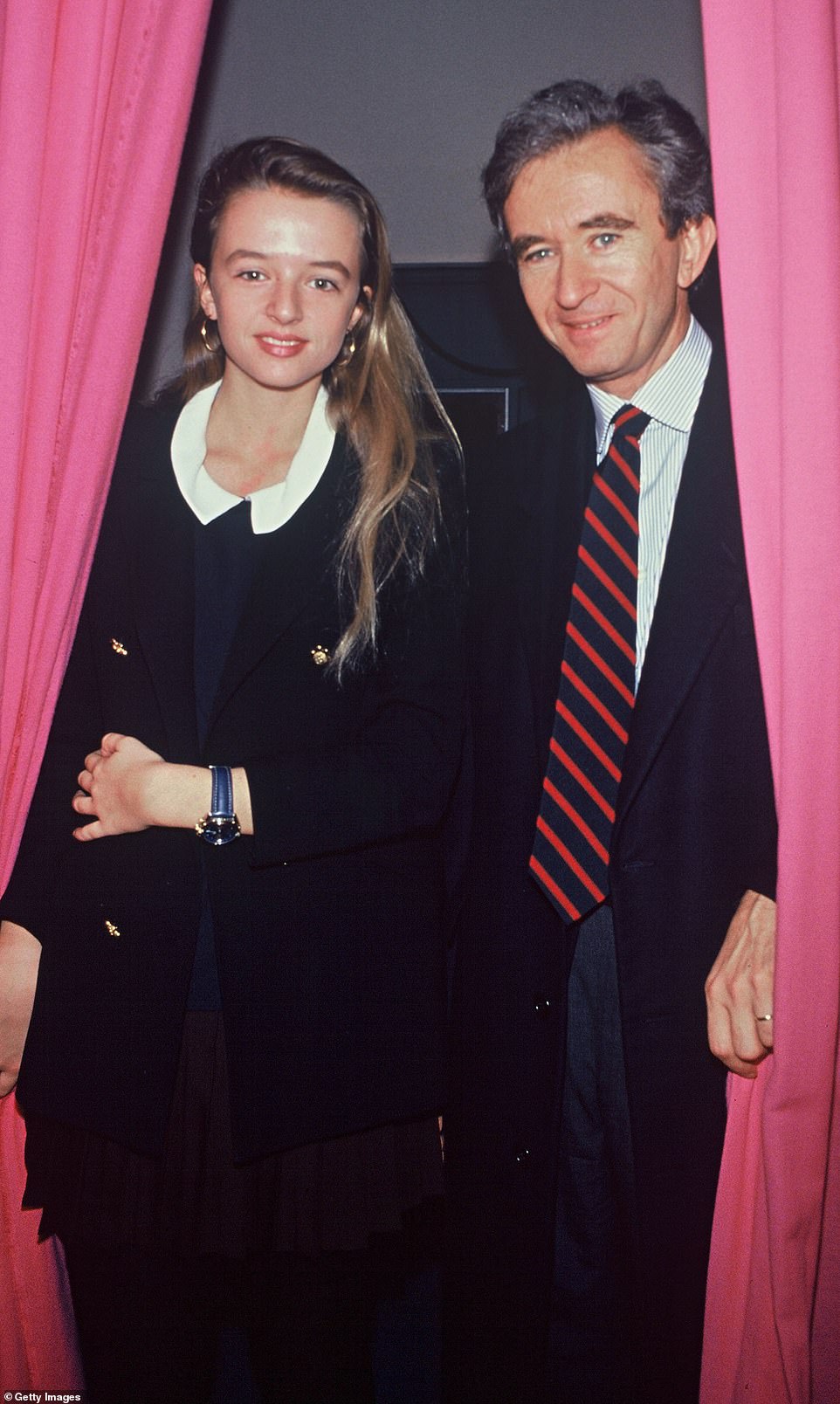