Jodie Whittaker’s performance as the first ever female Doctor Who has been given gushing reviews by critics across the board following a special preview screening.

The 2017 Christmas Special saw The Thick of It star Peter Capaldi hang up his Doc Marten boots and pass the Sonic Screwdriver to the Broadchurch and Black Mirror actress.

‘The pressure on any actor coming into the role – man or woman – is huge because they’re big boots to fill,’ Whittaker previouslytold Radio Times. ‘And for me there’s been 12 pairs of boots.

‘Obviously for Whovians this time the change has taken a very different direction than it has before. In a way, though, there is liberation in that new direction: the pressure is less for me because I can only do this my way.’

Whittaker’s casting is not the only big change – Broadchurch creator Chris Chibnall has taken over the show’s helm, and he has hinted there won’t be Daleks or other traditional alien foes such as Cybermen.

So what have the critics said? 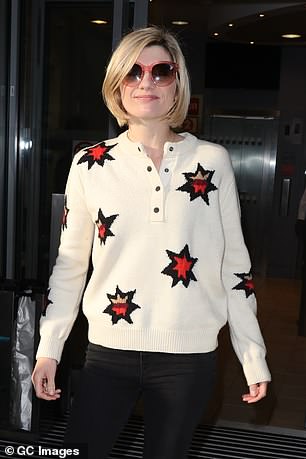 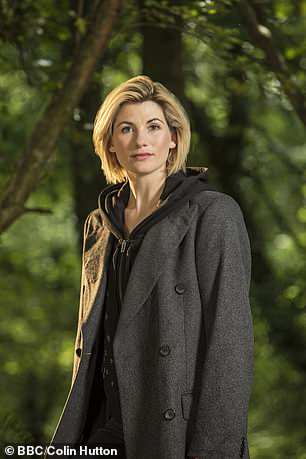 Martin Belam of The Guardian said Whittaker (pictured today, left, and in a publicity still, right)  ‘fizzes with energy as the Time Lord’ before adding ‘viewers are left in no doubt that she is very much the Doctor’

Martin Belam of The Guardian said Whittaker ‘fizzes with energy as the Time Lord’.

He wrote: ‘Comparisons to previous incarnations of the Doctor, of course, will be inevitable. Of the actors in the role in recent years, she is much closer in tone to Matt Smith or David Tennant than she is to Peter Capaldi or Chris Eccleston.

‘At just over an hour it wraps together peril, sadness, laughter and some ingenious solutions from the Doctor.

‘Towards the end of the episode, as Whittaker confronts the alien menace, viewers are left in no doubt that she is very much the Doctor.’

Ben Lawrence of The Telegraph says the first episode is ‘too dark and dour’ but Whittaker ‘is a delight’.

He said: ‘Whittaker is a breath of fresh air: a talented, emotionally engaged actress who brings warmth and humanity to a show that was largely in danger of disappearing up its own black hole.

‘She also shows versatility: one moment she’s trying to make sense of her regeneration, producing a stuttering fusillade of unconnected words like a Beckett heroine; the next she’s down-to-earth, tempting her new friends with a ‘cuppa and a fried-egg sandwich’. 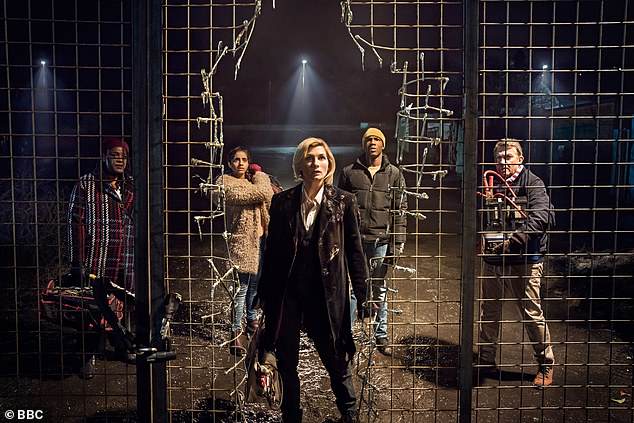 He does, however, add that: ‘The overall tone was too sober for a family show. I counted five deaths in this opener, and some time was given over to touchy-feely navel-gazing on mortality and knife crime, which would have been more appropriate in a community-theatre workshop.’

Carol Midgley awarded the episode four stars in her review from The Times.

‘The best compliment I can pay Whittaker after the first episode, her casting doesn’t feel remotely radical. It feels normal,’ she said.

‘After 10 minutes, you forget her sex was ever an issue. Whittaker brings energy, fizz and modernity to the role while looking baby-faced compared to her predecessor, Peter Capaldi, whom she describes in the show as a white-haired Scotsman.’

Boyd Hilton of Empire says: ‘Indeed, everything Jodie Whittaker and new showrunner Chris Chibnall have been promising us about the ramped-up, cinematic style of the new season turns out to be true.’

Morgan Jeffrey, of Digital Spy, said: ‘The Woman Who Fell to Earth is not perfect. It is, however, a promising start to a new era of Doctor Who that, if this first episode is anything to go on, is going to feel fresh and modern without losing the key components that have made the 55-year-old sci-fi show such an enduring success.

‘Let’s get this out of the way, right off: Jodie Whittaker is terrific. She makes an incredibly assured debut, with a performance that’s, quite literally, fizzing with energy. So much of the conversation about her casting, both positive and negative, has been about Whittaker’s gender, but within seconds of her appearing on screen, it becomes clear just how little it matters.

‘Whittaker just is the Doctor. You don’t question it, even for a moment.’ 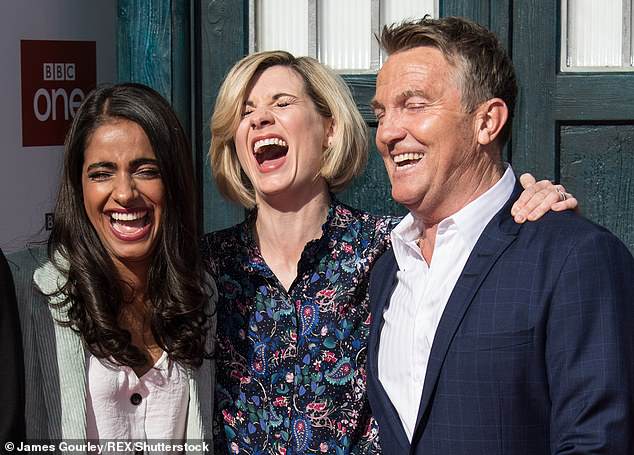 Simon Brew, from Den of Geek, said: ‘Jodie Whittaker’s Doctor is a bundle of energy, in a full debut episode that picks up on the same day as Peter Capaldi’s swansong.

‘Funny, compassionate and ready for a massive leap of faith when required, she’s the core part of a new group of travellers through time and space. What’s more, she headlines, but doesn’t dominate, a marked change in Doctor Who.

‘What really impresses about Jodie Whittaker, and there’s a lot here, is her generosity. She’s very much a part of an ensemble, a performer who doesn’t need the limelight in every shot, and as such, whilst the leader of the gang, an actor who can be part of a group. The sense of an 80s movie gang with a leader. Loved that.’

Stephen Kelly, from the i newspaper, wrote: ‘Whittaker sells herself as the Doctor immediately – nailing that indefinably alien core of the character, while also feeling relatable. The beauty of the Doctor as a role is that it allows actors to tap into parts of their personalities in a way they usually can’t.

‘And this is obvious with Whittaker – whose Doctor, much like her interviews, is charming and charismatic, who crackles with warmth, wit and a subtle righteous fury. All enhanced by her native no-nonsense Yorkshire accent.

‘For all the fuss made about her gender, it’s fitting what little difference it makes. She’s a thrill to watch.’ 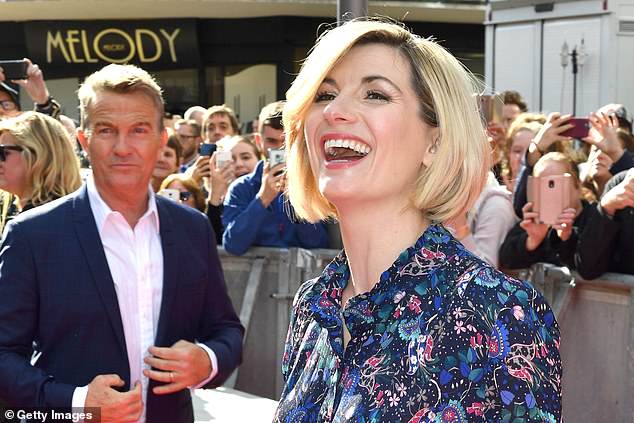 Bradley Walsh and Jodie Whitaker arrive at the Doctor Who Premiere Screening at The Light Cinema on September 24, 2018 in Sheffield

How Fullerton, from Radio Times, said: ‘From her first appearance in the story (which comes a bit later than you might expect), there’s no question – Jodie Whittaker IS the Doctor, owning the role like she’s been playing it for years and avoiding the sort of self-doubt we saw during the early days of Peter Capaldi’s Time Lord.

‘Bursting with energy, intensely moral and a little distracted, she’s eminently convincing as the continuation of every Doctor we’ve seen thus far while still breaking in new quirks.

‘And while her gender change does briefly come up (she makes reference to having been “a white-haired Scotsman” just half an hour before her new team meet her), it’s actually surprising how little you notice or even think about the fact that the new Doctor is a woman this time around.’

Nicole Methven, from The Mirror, said: ‘Will viewers like Jodie Whittaker’s version of the Doctor? The short answer is, yes.

‘She just gets on with it – and boy, is there a lot to get on with. With boundless energy the new doctor manages to be funny, heroic, confused and dynamic by turn.’

And Rod McPhee, of The Sun, said she is ‘sensational’ as the Time Lord, adding: ‘She may also be the breath of fresh air needed to revive a flagging franchise.

‘Jodie is a huge improvement on Peter Capaldi and brings back some of the spirit of David Tennant and Matt Smith — even if she doesn’t nail the character quite as well as they did.

‘She doesn’t always strike the right balance between quirky geek and masterful Time Lord. And at times she comes across as irritatingly childlike.

The Woman Who Fell to Earth, written by new showrunner and executive producer Chris Chibnall, will be broadcast on BBC One on Sunday 7 October at 6.45pm