Emmett Till was murdered by two white men in 1955, after he was accused of disrespecting a white woman. He was brutally tortured and lynched, before his body was dumped in the Tallahatchie River in Money, Mississippi

A new memorial honoring Emmett Till will include a number of elaborate security measures, after previous shrines for the murdered black child were vandalized and destroyed.

On Thursday, the Emmett Till Commission revealed plans were in place to develop a tribute space featuring a security gate, surveillance cameras and a bulletproof sign.

The Commission has reportedly secured land for the new memorial at Graball Landing in Money, Mississippi where Till’s body was dumped after he was tortured and lynched by two white men in 1955.

The 14-year-old’s murder prompted national outrage at the time and set into motion the national civil rights movement after his mother – Mamie Till-Mobley – decided to showcase his brutal beating at an open casket funeral.

In a statement on the Commission’s website, officials said the gate, cameras and bulletproof plaque were necessary to safeguard the space against destruction by modern-day racists.

‘The efforts of the Commission have [previously] been severely hampered by vandalism,’ they wrote. 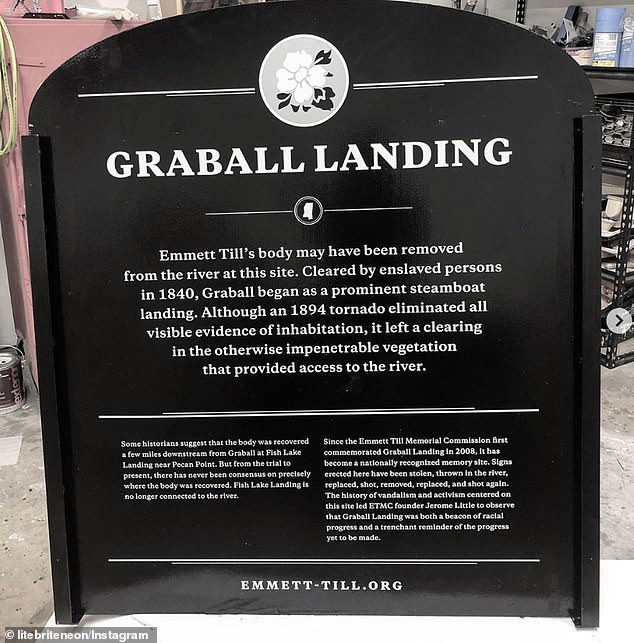 The Emmett Till Commission is employing a number of security measures to prevent vandalism at a new memorial space honoring  the murdered black child. A new plaque to be placed at Graball Landing is made out of bulletproof steel (pictured) 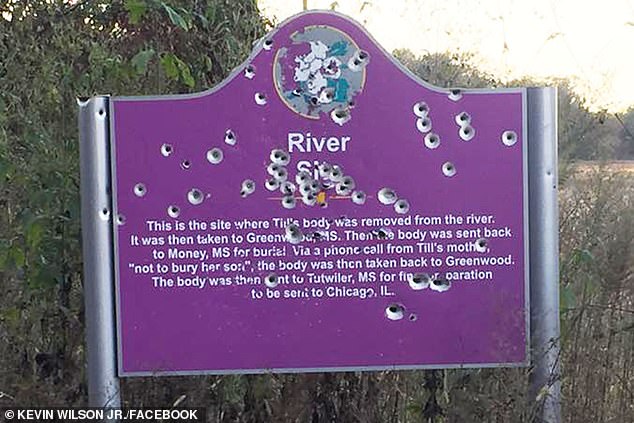 Earlier signs honoring Emmett Till have been vandalized and destroyed. Erected in 2008, the River Site sign commemorating the place where Till’s body was found, has been repeatedly shot at

‘Our signs and ones like them have been stolen, thrown in the river, replaced, shot, replaced again, shot again, defaced with acid and have had KKK spray painted on them.’

The Commission has employed the help of the Lite Brite Neon company to create a new plaque at Graball Landing made out of bulletproof steel.

They also revealed they are hoping to have the new memorial space earmarked as a National Park. Under current legislation, vandalism in National Parks is a federal crime.

Thursday’s announcement came just 24 hours after it was revealed three University of Mississippi students were suspended from their fraternity after they posed with guns in front of a vandalized sign honoring Till.

‘The photo is inappropriate, insensitive and unacceptable. It does not represent our chapter,’ Taylor Anderson, president of Ole Miss’ Kappa Alpha Order, said in an email. ‘We have and will continue to be in communication with our national organization and the University.’ 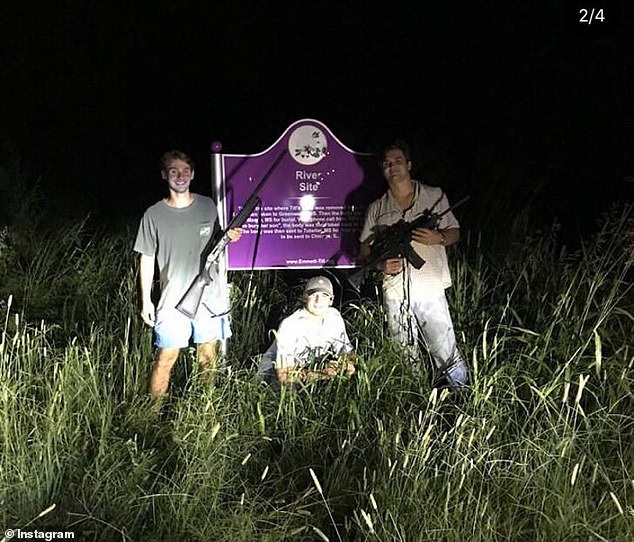 Earlier this week, three University of Mississippi students were suspended from their fraternity after they posed with guns in front of a vandalized sign honoring Till

U.S. Attorney Chad Lamar of the Northern District of Mississippi in Oxford looked over the photo and said that the Justice Department’s Civil Rights Division would be looking into the incident.

‘We will be working with them closely,’ he said.

Erected in 2008, the River Site sign commemorating the place where Till’s body was found, has been repeatedly vandalized.

The first version of the sign was thrown into the river, while the second sign was shot at with 317 bullets or shotgun pellets before it was removed.

A third sign has been damaged with 10 bullets holes and was removed last week.

The Emmett Till Commission has raised by more than $12,000 in donations towards its new memorial space, with the group saying on their website that it will an important site to teach future generations about race in America.

‘Our aim is to use the history of Till’s murder to spark conversations about the corrosive effects of racism, past and present,’ they stated. 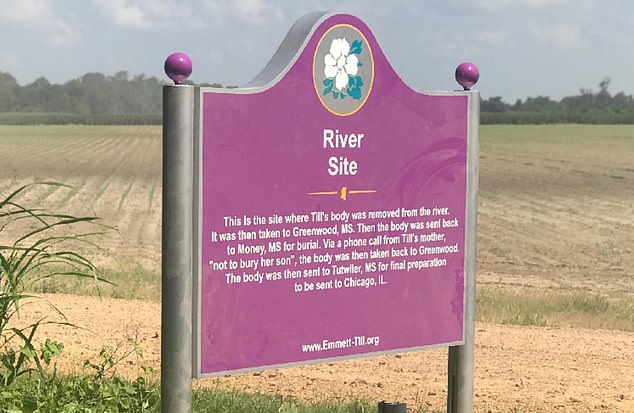