One of the world’s leading authorities on online data security has warned new EU copyright regulations will give US tech firms money and data from hobbled European rivals.

Yesterday the EU has adopted copyright reforms championed by the media despite opposition from Google and campaigners saying it restricts internet freedom.

The reform, which got final approval from the European Council on Monday, was loudly backed by news publishers and artists who want protection over their content being shared.

But German Data Privacy Commissioner Ulrich Kelber, who is also a computer scientist, warned before the measure passed that its Article 13 will exacerbate the problem of market concentration in the tech sector, and expose Europeans to particular risk of online surveillance and manipulation.

Article 13 requires that online communities, platforms, and services prevent their users from committing copyright infringement, rather than ensuring that infringing materials are speedily removed.

In an official statement on the Directive, Kelber warned it would lead to the use of automated filters, which would be powered by the industry’s largest firms, since they have the resources to build and run the software.

He wrote: ‘But if a company is too small to afford licenses, it’s also too small to build filters. Google’s Content ID for YouTube cost a reported €100 million to build and run, and it only does a fraction of the blocking required under Article 13. That means that they’ll have to buy filter services from someone else.

‘The most likely filter vendors are the US Big Tech companies like Google and Facebook, who will have to build and run filters anyway, and could recoup their costs by renting access to these filters to smaller competitors.’

Cory Doctorow, a leading campaigner for copyright reform, explained: ‘So Article 13 guarantees America’s giant companies a permanent share of all small EU companies’ revenues and access to an incredibly valuable data-stream generated by all European discourse, conversation, and expression.

‘These companies have a long track record of capitalising on users’ personal data to their advantage, and between that advantage and the revenues they siphon off of their small European competitors, they are likely to gain permanent dominance over Europe’s Internet.’

Nineteen countries endorsed the revamp which hasn’t been updated in almost two decades – before the birth of YouTube or Facebook.

EU countries adopted the reforms that were agreed last month by the European Parliament, they said in a statement.

‘The new rules ensure adequate protection for authors and artists, while opening up new possibilities for accessing and sharing copyright-protected content online throughout the European Union,’ they said. 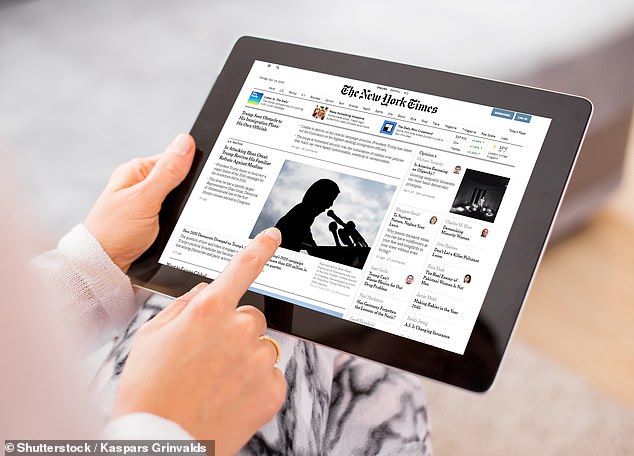 What are the key issues to the revamped copyright reform?

WHAT DOES THE DIRECTIVE SAY?

The most vigorously debated part of the legislation is a section that makes companies responsible for making sure that copyrighted material isn’t uploaded to their platforms without permission from the original creator.

It puts the legal onus on platforms to prevent copyright infringement but critics say it will end up having a chilling effect on freedom of expression on the internet and could result in censorship.

Another section of the bill that caused concern requires search engines and social media sites to pay for linking to or offering up snippets of news articles.

HOW WILL IT AFFECT INTERNET PLATFORMS?

Some sites would be forced to license music or videos. If not, sites would have to make sure they don’t have unauthorized copyrighted material.

Critics worry that could lead to costly automatic filtering. And paying for links could create further costs.

That could give tech giants an edge over smaller companies. Google said last year it spent more than $100 million on Content ID, its copyright management system for approved users on YouTube, where more than 400 hours of content is uploaded every minute. The figure includes both staffing and computing resources.

Critics say it could act as censorship and change internet culture.

They say the automatic filters are blunt instruments, deleting some material that should be allowed online.

YouTube has warned of unintended consequences, saying that in cases where copyright is uncertain, it would have to block videos to avoid liability.

Some consumers worry that the new rules would bring an end to parodies and viral internet ‘memes’ that have powered online culture and are often based on or inspired by existing songs or movies or other content. The EU denies this.

‘We fear it will harm online innovation and restrict online freedoms in Europe.’

It depends on whom you ask. The music industry and other groups that collect royalties say the directive will help give writers, artists and creators more protection of their rights and incomes, by requiring tech giants such as Apple, Facebook and Google to pay them more for their work.

Some authors and artists fear they won’t earn significantly more money but their creativity will be stifled.

Google estimates it has paid out more than $3 billion to rights holders through its Content ID system, which was created in 2007.

HOW HAVE PEOPLE REACTED?

Some high profile artists have spoken out in favor. Former Beatles member Paul McCartney wrote an open letter to EU lawmakers encouraging them to adopt the new rules.

But many appear worried it will change the internet as we know it. More than 5.2 million people signed an online petition against the directive.

Internet luminaries such as Tim Berners-Lee, the inventor of the World Wide Web, and Wikipedia co-founder Jimmy Wales have spoken out against it.

So has the former frontman for the band Fugees, Wyclef Jean, who has said he is better off financially because fans can freely share his music on internet platforms.

Last month, tens of thousands of people marched in cities across Germany to protest against the directive.

Wikipedia’s German-language page was temporarily blacked out in protest and visitors were greeted with a statement from online encyclopedia authors urging them to ask their EU lawmakers to stop the bill.

Poland’s leader has said his country will not implement the directive, arguing it threatens freedom of speech.

The EU’s member countries have two years to comply with the directive by drafting their own national laws.

Six countries – Italy, Sweden, Poland, Finland, the Netherlands and Luxembourg – voted against it, so implementation is likely to be uneven, setting the stage for legal challenges.