Best of both worlds: Neil Irwin (pictured) was able to welcome his daughter Penny in the world and make his grand final on the weekend

A man whose child was born a day before his AFL grand final was able to attend the match and help the team break a 39 year premiership drought – thanks to an extraordinary act of mateship.

Neil Irwin lives in Canberra, but has been driving nearly four hours every week to play for the Leeton Whitton Crows for the last three years with his friend Toby Conroy, in a bid to help the country team finally win a premiership.

He welcomed his third child, a girl named Penny, into the world in Canberra last week. Knowing her birthday was so close to his grand final match, he had told the team he might not make it.

But desperate to have his teammate stand beside him as they fought to change the team’s luck, Toby and the rest of the team sought a way to get him there.

‘We didn’t want him to miss the birth of his daughter… or to miss the game if possible,’ Toby told Daily Mail Australia. 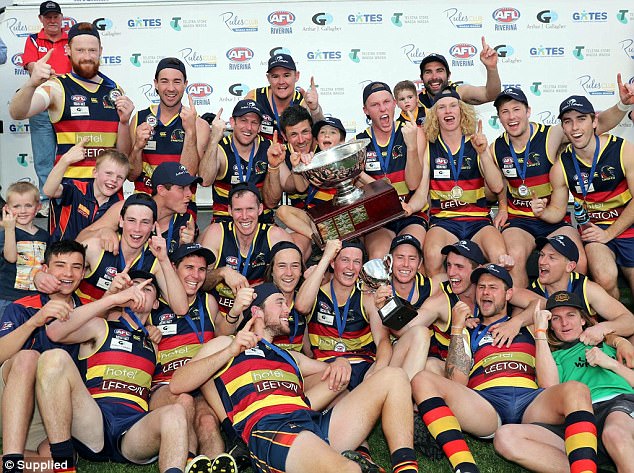 The team, who play nearly four hours away from where Neil lives, hired a small plane owned by a team sponsor to pick the new father up from the hospital and bring him to the game – where they broke a 39-year premiership drought 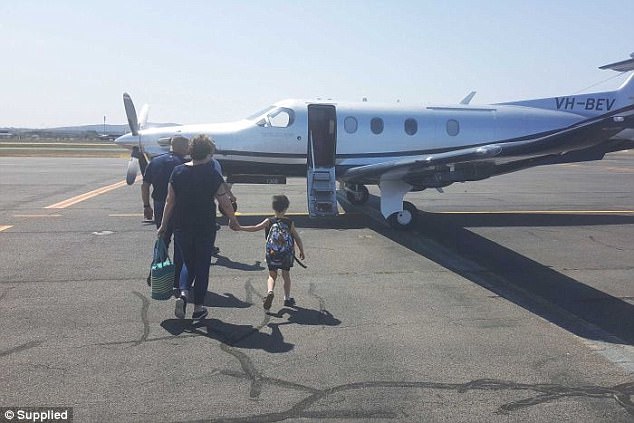 Neil was able to fly to the game with his mother and his five-year-old son, who was flying in a plane for the first time ever

‘We’re lucky to have a sponsor in town who has a plane and we decided to pursue it and see if it was a possibility to solve our problems, and it worked out it would be – he could spend a bit of time making sure everything was alright with the pregnancy and get there in time to play.’

The team flew him from Canberra to Narrandera – making what would have been a nearly four hour drive a quick 45 minute flight.

Toby says though Neil knew about the plane, he didn’t believe the team would actually be able to pull it off, and had cut his losses when it came to making the game.

‘It took me a while to convince [Neil] it was a possibility and then he was pretty amazed by the whole experience I think,’ Toby said.

Toby and Neil met 10 years ago playing football and had remained close friends ever since.

He says the pair were fast friends when they first met, but their weekly journeys out west had solidified their relationship.

Along with two other men, they had spent the season, and the two before, driving out to the country town Toby was brought up in to try and help the team win their first premiership in nearly 40 years. 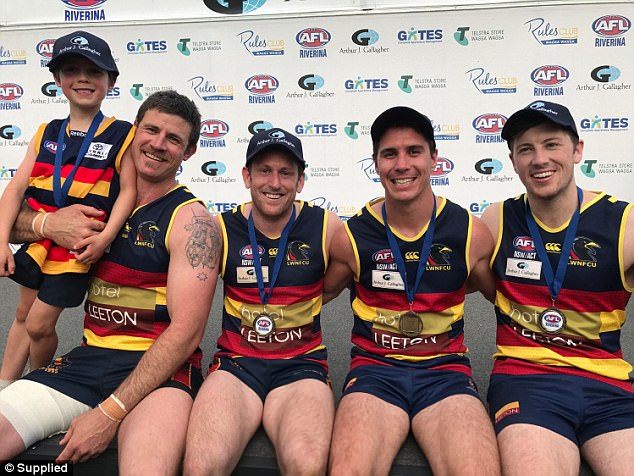 Neil (left) was able to make it down thanks to the determination of his friend of 10 years, Toby Conroy (second from left), who had driven with from Canberra to the Riverina region of NSW every weekend to play with him

‘The club hadn’t won a premiership for 39 years, and we were getting a bit older and decided to take up the challenge of going back and trying to help out, and this was our third year,’ he explained.

‘We were able to get the job done this year which was incredible as well – it was amazing, a mix of a lot of different feelings: relief, excitement, it was great.

‘Not just for the players but for the town and the community as well. There were a lot of happy people over the last 24-48 hours. It’s nice to be able to put smiles on so many people’s faces.’

Neil was ‘completely humbled and amazed’ by the entire day, Toby said.

‘He said look, thanks heaps, this is amazing, I can’t thank everybody enough – I just want to make sure we get the job done.’

Within six hours, the new father was on his way home to his newly expanded family.

‘He got down, played the game, hung around for a bit and thanked everyone and then had to get on the plane to go home and see his daughter,’ Toby said.

‘We stayed in contact that night, and he was really happy he got home – I think he had a really nice night with the family.’ 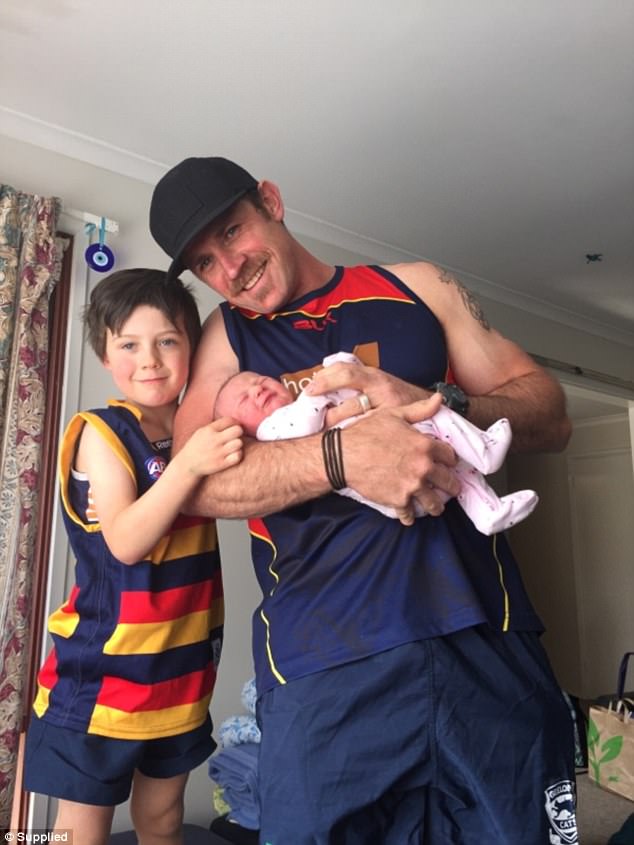 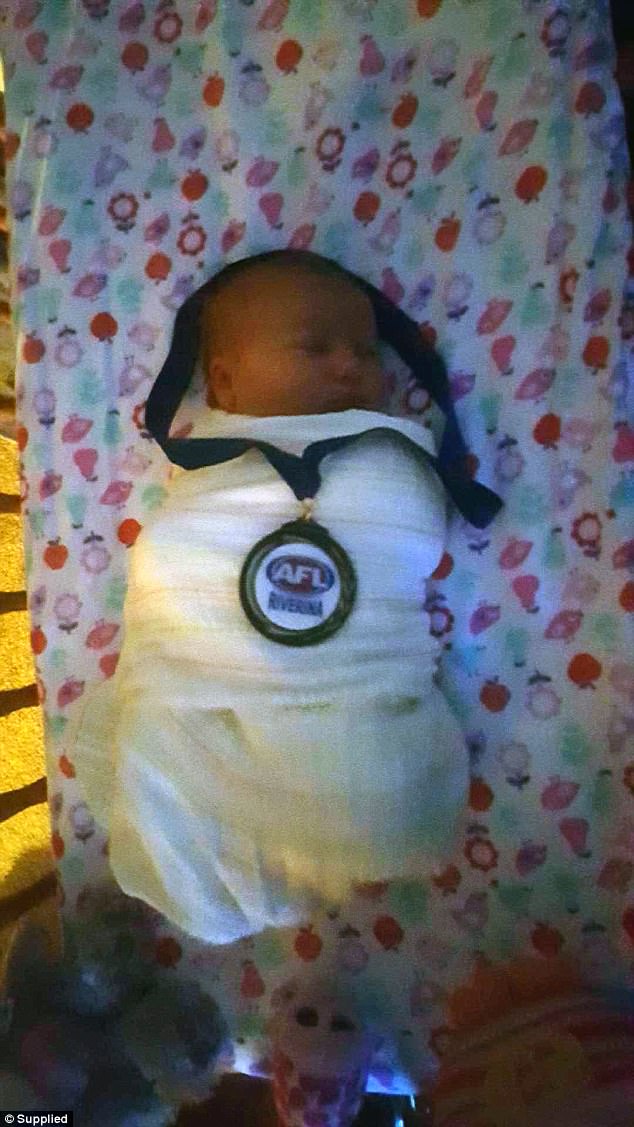 By 7.30pm on the same day he left, Neil was back at home celebrating with his new daughter (pictured) and his wife

Adding to the emotional rollercoaster of the day was the quick turnaround of events.

Neil’s wife was discharged from hospital about 10.30 on Saturday morning, and his plane took off around 12pm.

The new father-of-three was back on a plane home about six pm the same day, and he was home before 7.30pm.

Toby says while he hasn’t spoken to Neil’s wife yet, he’s confident she had given the all clear for her husband’s departure.

‘She was obviously okay with it, because Neil made it pretty clear from the start that if there were any problems or complications he would make the choice of staying with his wife,’ he said.

‘She would have been pretty happy he wasn’t away for days or anything like that, and could come back nice and quickly.’

Neil was able to bring his five-year-old son and his mother on the plane so they could share in the day and the excitement.

His son was able to run out onto the field with Neil and sit with his father when the team took pictures with the premiership trophy.

‘It was a bit of a fairytale really, it was a pretty incredible day for a lot of people,’ Toby said.

‘It’s a good story and we’ll be able to share this for a long time to come.’